Advertisement
Ad
Post-Game: Heat lose another one in Laval 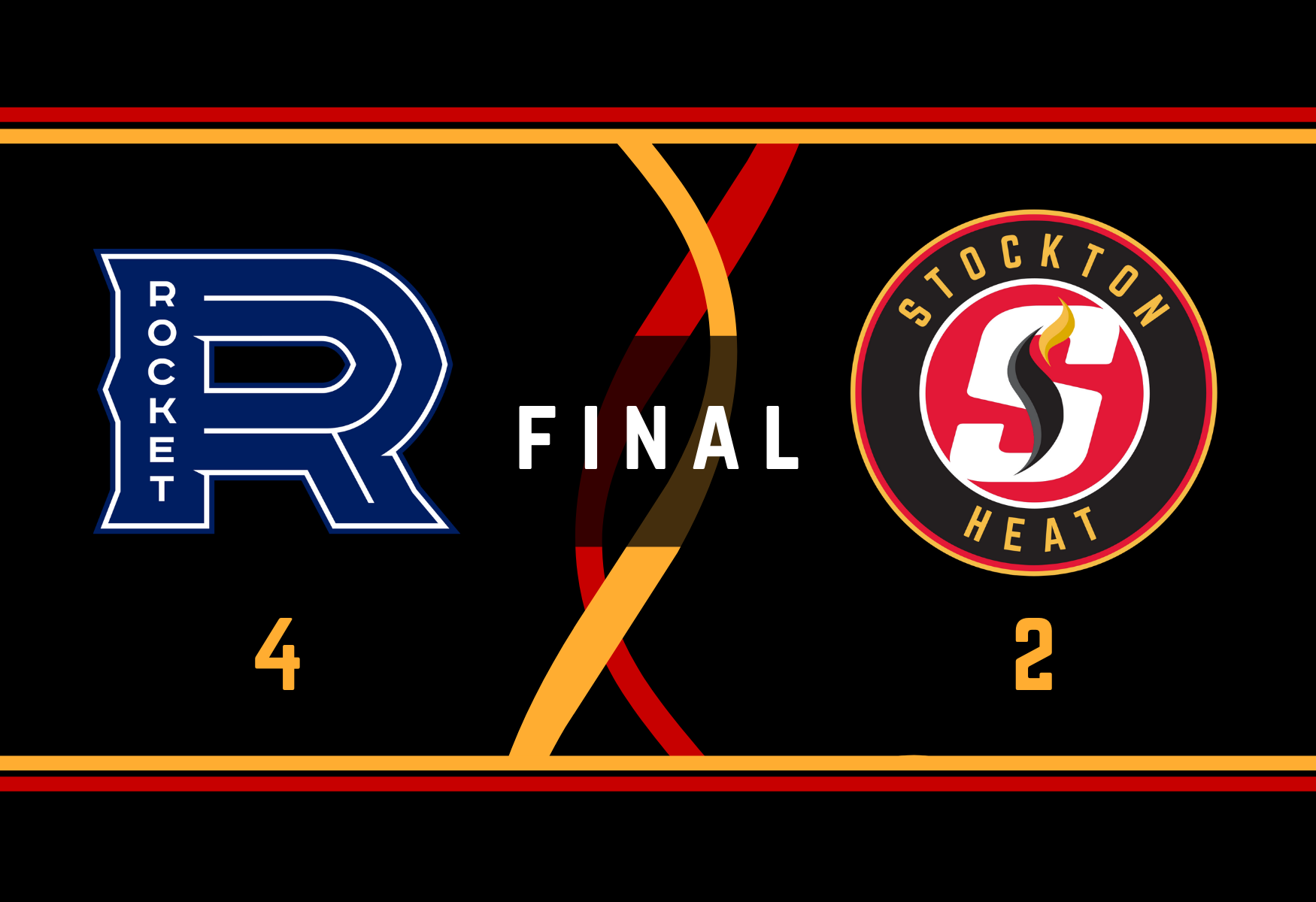 Photo credit: Graphic by Mike Gould
By Mike Gould
1 year ago
Comments
The Stockton Heat have now lost 10 of their last 11 games. On Sunday evening, they fell to the Laval Rocket by a 4-2 score.
Stockton has lost all six games it has played against Laval this season, all of which have happened during this current losing stretch. The Rocket and Heat had never met prior to this season.
Rafael Harvey-Pinard scored twice for Laval, with Yannick Veilleux and Ryan Poehling also adding goals for the home side. Mark Simpson and Adam Ruzicka scored for Stockton in the losing effort.
Heat goaltender Garret Sparks kept the Heat in much of Sunday’s game, making 34 saves on 37 shots. Michael McNiven made 16 saves for Laval.
These two teams will meet again on Tuesday to do battle for the final time this regular season.

The Heat did not play a good first period on Sunday. They recorded just one shot against McNiven over the entire 20 minutes, with Laval firing 14 against Sparks over that span. Laval failed to capitalize on its one power play opportunity in the frame.
Advertisement
Ad
Advertisement
Ad

Shots are now 12-0 for Laval. Garret Sparks makes a pretty nice save on a long shot by Xavier Ouellet. #AHLHeat pic.twitter.com/HnLpTAV6zm

Neither team scored in the first period. The Rocket continued peppering Sparks with shots to begin the second, inflating the shot discrepancy to 19-1 less than five minutes into the middle period.
Stockton finally did record its second shot of the game at the 4:34 mark of the second period. To put it mildly, McNiven made an easy save.

The #AHLHeat have recorded their second shot of the game. Very dangerous chance. pic.twitter.com/aLXUysYWwn

Laval opened the scoring less than two minutes later. With Heat captain Byron Froese serving a penalty, the Rocket moved the puck around quickly in Stockton’s zone and it found its way to a wide-open Rafael Harvey-Pinard for a tap-in goal.
Ryan Poehling and Jordan Weal picked up the helpers on Harvey-Pinard’s sixth goal of the season.

Connor Mackey cross-checked Ryan Poehling in the back right in front of the net after the goal. Poehling just headed down the tunnel for Laval. pic.twitter.com/Ah6UwaYbFh

Stockton started to improve as the second period wore on. Laval still outshot the Heat in the middle frame, but only by a 11-10 margin.
Advertisement
Ad
Advertisement
Ad
Eetu Tuulola and Giorgio Estephan recorded Stockton’s best chances of the second period in its dying minutes, both getting dangerous shots on McNiven from just a couple feet away.

Tuulola makes a power move towards the Laval net—he and Estephan get good chances on McNiven.

Laval began the third period with a vengeance. Fresh off his spirited tilt with Alex Gallant on Friday, Yannick Veilleux scored just 90 seconds into the final 20 minutes and made it a 2-0 score in Laval’s favour.

Less than three minutes later, Ryan Poehling finished off a cross-crease play and gave the Rocket a 3-0 lead with his eighth goal of the year.
The assists on the goal went to Joel Teasdale and Gustav Olofsson.

The Heat managed to get one back right after Poehling’s goal, with forward Mark Simpson tipping a CJ Lerby pass past McNiven’s pad to break Laval’s shutout bid.
Advertisement
Ad
Advertisement
Ad
Dmitry Zavgorodniy was also in the vicinity of the goal and temporarily received credit until it was changed to Simpson after the game. Alex Gallant picked up the secondary helper on Simpson’s fourth of the year.

Dmitry Zavgorodniy gets his first AHL goal! The #AHLHeat are on the board.

Stockton coach Cail MacLean opted to pull Sparks with over three minutes remaining in regulation time. With the 6-on-5 advantage, the Heat managed to draw within a single goal.
Adam Ruzicka fired the puck upstairs on McNiven with 39 seconds remaining to make it a 2-1 game. The goal was just Ruzicka’s second in his last 15 games; Alexander Yelesin and Zac Leslie picked up the assists.

Ruzicka gets his ninth of the year after a great 6-on-5 shift. #AHLHeat pic.twitter.com/DNmqJerr1t

Ultimately, the Heat ran out of time to complete the comeback. Harvey-Pinard sealed the win with an empty-net goal and the Rocket took this one by a 4-2 score.
Advertisement
Ad
Advertisement
Ad

Teams very seldom win after allowing 19 of a game’s first 20 shots. I don’t have any supplementary statistics on that, but… trust me.
It might be time to start talking about Matthew Phillips, who is as cold as a player can be right now. After scoring 15 points in the first 12 games of the year, Phillips has just a single assist over his last nine contests and is a minus-nine over that span. The Heat will need him to, er, heat up if they want to start winning again.
Advertisement
Ad
Advertisement
Ad

No individual Heat skater registered more than two shots in Sunday’s game. The choice for “hottest Heat” is obvious: Garret Sparks, who kept his team alive in the first 20 minutes before ultimately conceding three goals on 37 shots.
Despite now possessing a losing record (4-5-0), Sparks still has a .920 save percentage in 10 games this year. That’s the sixth-best SV% in the entire AHL.

The Heat will finish this three-game series with Laval on Tuesday at 5:00 pm MT. You can catch that game on AHL TV; I’ll be posting updates on Twitter at @miketgould.