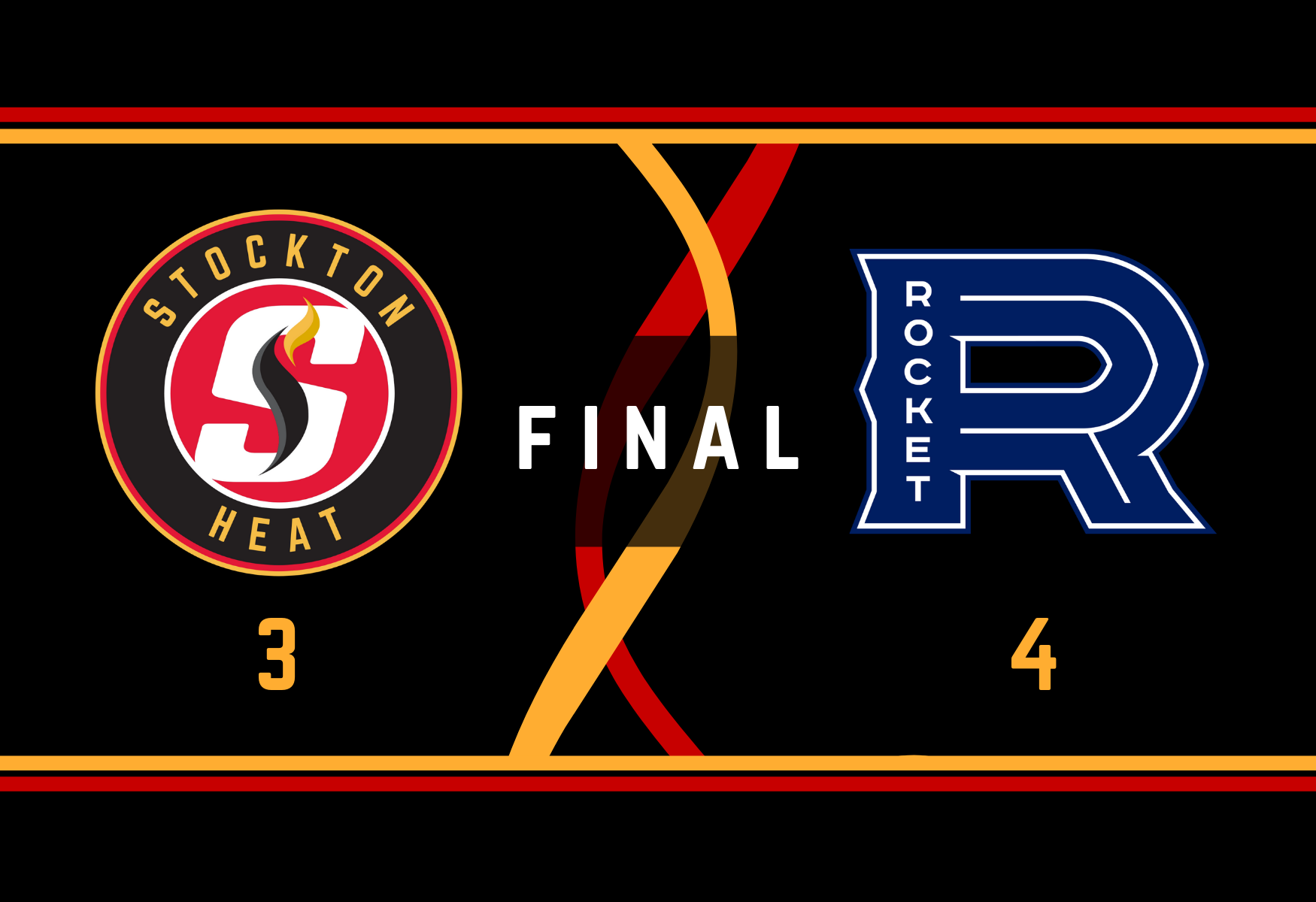 Photo credit: Graphic by Mike Gould
By Mike Gould
1 year ago
Comments
After winning eight consecutive games between Feb. 24 and Mar. 11, the Stockton Heat have now lost three in a row.
Stockton’s latest loss came, once again, at the hands of the Laval Rocket. The Heat fell to Laval in overtime by a 4-3 score on Thursday and lost by the same margin, albeit in regulation, on Saturday.
Byron Froese, Michael Stone, and Luke Philp scored for the Heat in the losing effort, with goaltender Louis Domingue making 17 saves on 21 shots.
Rocket forward Rafael Harvey-Pinard opened the scoring at the 11:34 mark of the game. Joel Teasdale and Joseph Blandisi scored in the second period before winger Jesse Ylönen tallied the eventual game-winner in the final frame.
23-year-old goaltender Michael McNiven made his third start of the season for Laval, allowing three goals on 25 shots to maintain a perfect 3-0-0 personal record.
With the loss, the 8-4-1 Heat have relinquished their spot atop the AHL’s Canadian Division to the 10-4-1 Rocket. Stockton’s 17 points and .654 points percentage now ranks behind both Laval’s 21 points and its .700 points percentage.
Advertisement
Ad
Advertisement
Ad

After Thursday’s game, Heat coach Cail MacLean made a point about how his team needed to be more prepared to start games. Laval had stormed out to a 3-0 lead by the 10:19 mark of the first period and Stockton spent the rest of the game trying to catch up.
To their credit, the Heat avoided giving up any goals in the opening 10 minutes of Saturday’s game. They even managed to hold Laval to exactly zero shots through that time, generating two of their own.
Alas, Laval still opened the scoring on Saturday with just its second shot of the contest. Winger Rafael Harvey-Pinard got the Rocket on the board with a tricky backhand shot from the slot. Domingue got a piece of it but not enough.

The Heat needed less than a minute to answer. Team captain Byron Froese, who made his official return to the team in Thursday’s game, scored his first AHL goal of the season on a crafty redirection just 37 seconds after the opening goal.
Advertisement
Ad
Advertisement
Ad

Crafty tip by Froese ties this one up. Yelesin and Tuulola pick up the helpers. #AHLHeat pic.twitter.com/3nLeRZllBt

Late in the opening frame, with the Heat on the power play, Dmitry Zavgorodniy attempted to take the puck coast-to-coast for his first professional goal (and point). He was stopped… not by McNiven, but with a huge hit from Rocket defenseman Cale Fleury.

Ouch. Dmitry Zavgorodniy might feel the effects of this hit in the morning. #AHLHeat pic.twitter.com/i22lYifer3

Laval forward Joel Teasdale restored his team’s one-goal cushion early in the second period with another crafty backhander from about 10 feet out.

Stockton nearly managed to answer again. Domingue started a transition play with a quick pass to CJ Lerby, who managed to find a streaking Adam Ruzicka as the Rocket went on a quick change. Ruzicka broke in on the right side and fired a wrister that McNiven snagged out of the air.

Late in the first period, Heat defender Connor Mackey came within an inch of tying the game. His long-range wrister caught the iron and the rebound bounced around in the crease before being swept to the corner.
Advertisement
Ad
Advertisement
Ad

Mackey hits the post and the puck is swept off the goal line before Pettersen is dumped in the corner. #AHLHeat pic.twitter.com/u4vBstxgXL

Ruzicka had another chance to score in the dying minutes of the middle frame, taking a pass from Matthew Phillips and firing a one-timer that was stopped by McNiven’s right pad.
Laval turned around for an odd-man rush and the puck eventually found its way to Joseph Blandisi standing at the side of the net. The veteran forward slammed the puck past Domingue to give his team a 3-1 lead.

Ruzicka gets denied on a one-timer. The Rocket come down the other way and Blandisi buries one. #AHLHeat trail 3-1. pic.twitter.com/RIGdRO4X56

Rocket winger Jesse Ylönen made it a three-goal game in the final frame, pounding a one-time feed from Otto Leskinen by Domingue. Facing a 4-1 deficit with 9:44 to play, the Heat needed to expeditiously turn things around.

Jesse Ylönen makes it 4-1 for Laval on the PP.#AHLHeat heading right back to the PK, too. Mackey gets the gate for unsportsmanlike conduct immediately after Ylönen's goal. Didn't see what happened. pic.twitter.com/XKUFYdnLSc

After killing a Mackey penalty, the Heat found themselves on a lengthy 4-on-3 advantage at the 13:40 mark of the period. MacLean opted to pull Domingue for another extra attacker. That fifth skater was Michael Stone, who skated off the bench, immediately intercepted a clearing attempt, and scored his first goal as a member of the Heat.
Advertisement
Ad
Advertisement
Ad

Stone took a kneeing penalty with 4:59 to play. The Heat managed to kill that one off, too, and continued to press. With just 61 seconds remaining in regulation time, Stockton forward Luke Philp took a pass in the slot from Martin Pospisil and hammered a one-timer past McNiven to make it 4-3.

Philp's fifth of the year comes with 61 seconds to go. #AHLHeat pic.twitter.com/GvKKmpYhHs

Stockton failed to record another shot in the remaining balance of regulation time and ultimately fell by the same 4-3 score.

Despite avoiding an early hole, the Heat still found themselves trailing by three goals on Saturday and ran out of time to claw back into the game.
The Rocket did a very good job of keeping Matthew Phillips to the outside in the offensive zone. The shifty winger still leads Stockton with 15 points in 13 games but he only recorded one shot on Saturday.

In all seriousness, Luke Philp was probably Stockton’s most dangerous player on Saturday. He scored with just over a minute remaining to make it a 4-3 game and peppered Michael McNiven with four shots on goal. Philp now has five goals and 11 points through 13 games this season.
Advertisement
Ad
Advertisement
Ad

Stockton’s four-game series against Laval will continue on Sunday with another 2:00 p.m. MT matinee clash. You can catch the game on AHL TV; I’ll be posting updates on Twitter at @miketgould.