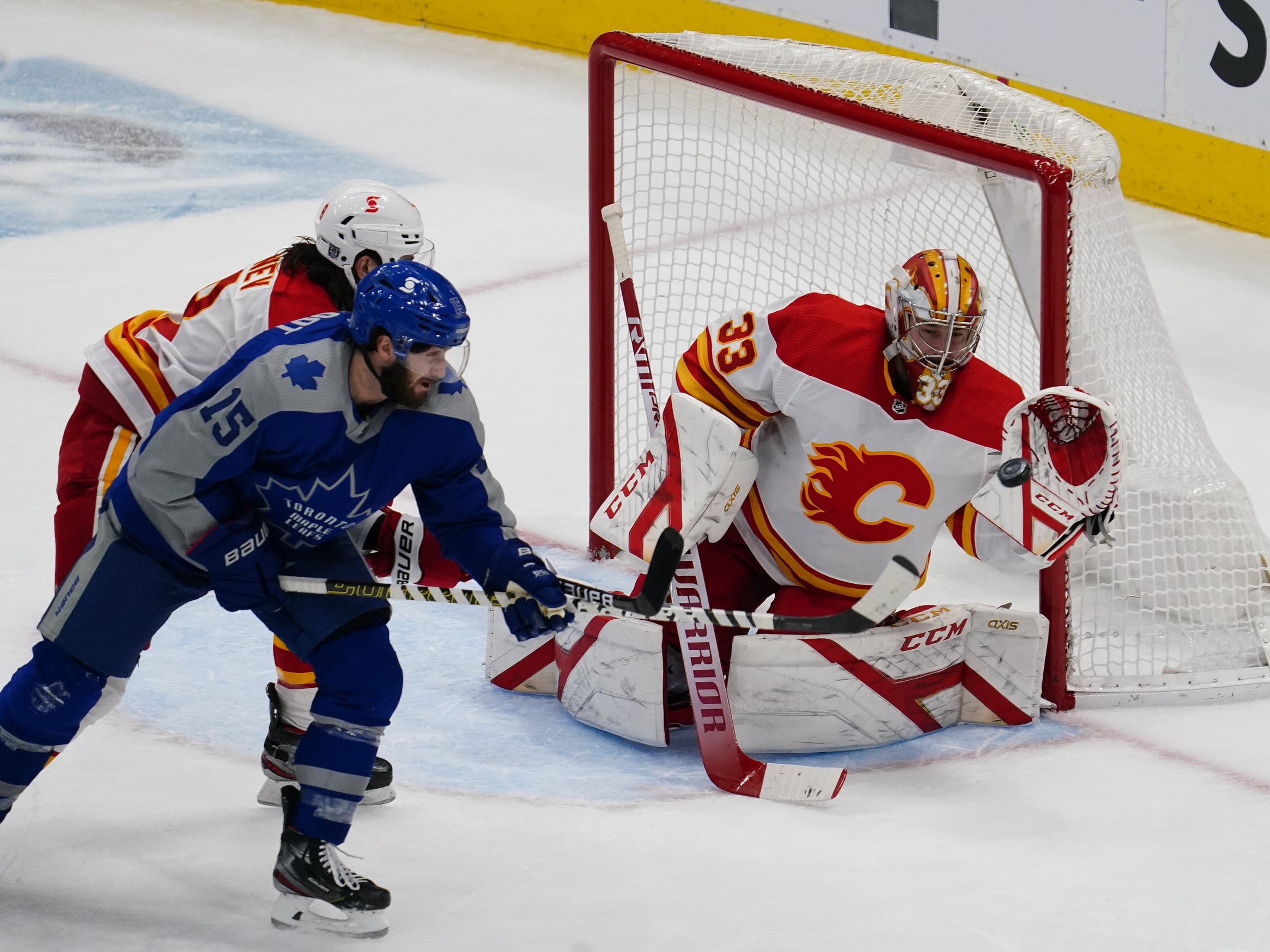 Photo credit: John E. Sokolowski-USA TODAY Sports
By Ryan Pike
1 year ago
Comments
The Calgary Flames very nearly committed a robbery in Toronto on Wednesday night. They were largely out-played by the Toronto Maple Leafs for two periods, but they were a goal-mouth scramble away from leaving Toronto with back-to-back shutouts. Instead, Toronto scored late and again in overtime to beat Calgary by a 2-1 score.

The opening period was chock full of special teams, carrying over a trend from Monday’s game. The Leafs had three power plays, the Flames just one. The Flames’ penalty kill was sharp, but their power play was so-so. Neither team scored in the first period.
Shots were 11-7 Maple Leafs and scoring chances 7-3 Flames in the first period.
The Leafs pressed in second, holding a clear edge in territorial play but not getting anything past David Rittich. Here’s the best stop of the period.

Shots were 15-11 Maple Leafs and scoring chances 13-9 Maple Leafs in the second period.
The third was tight-checking, even moreso than the first two periods. The Flames got a golden chance late and cashed in. Elias Lindholm and Matthew Tkachuk cycled the puck deep in Toronto’s zone, and Tkachuk found Andrew Mangiapane unattended in the slot with a pass. Mangiapane beat Michael Hutchinson to give the Flames a 1-0 lead.
Advertisement
Ad
Advertisement
Ad

Tkachuk centers to Mangiapane, who shoots past Hutchinson, and it's 1-0 #NHLFlames! pic.twitter.com/S0J9dNUe44

But that lead would not last. Elias Lindholm missed an empty net after Toronto pulled their goalie. The Leafs threw everything on net and William Nylander jammed in a loose puck to tie the game at 1-1 with just 88 seconds left in regulation.
Shots were 12-3 Maple Leafs and scoring chances 9-3 Maple Leafs in the third period.
This game went to overtime. Nylander drove the net and sniped a shot over Rittich to win this one 2-1 for Toronto.

The Flames seemed to lose steam as this game went on, basically losing the ability to generate a ton in the offensive zone. They defended reasonably well, as they did a decent job collapsing down into the net-front area to prevent secondary scoring chances.
But c’mon, they were in this game because of their goaltender.
Advertisement
Ad
Advertisement
Ad

Lindholm whiffing on that empty net probably resulted in the Flames getting one fewer point out of this game than they probably would’ve otherwise.

Once again no Jacob Markstrom, so Artyom Zagidulin dressed as backup.

David Rittich’s shutout streak snapped at 137:56 with Toronto’s late game tying goal. 1:32 away from back-to-back SO’s.#Flames and Maple Leafs off to overtime tied 1-1.

The Flames (9-9-2) are off to Canada’s capital city, scenic Ottawa. Once they get there, they’ll drive all the way to Kanata to play the Senators.