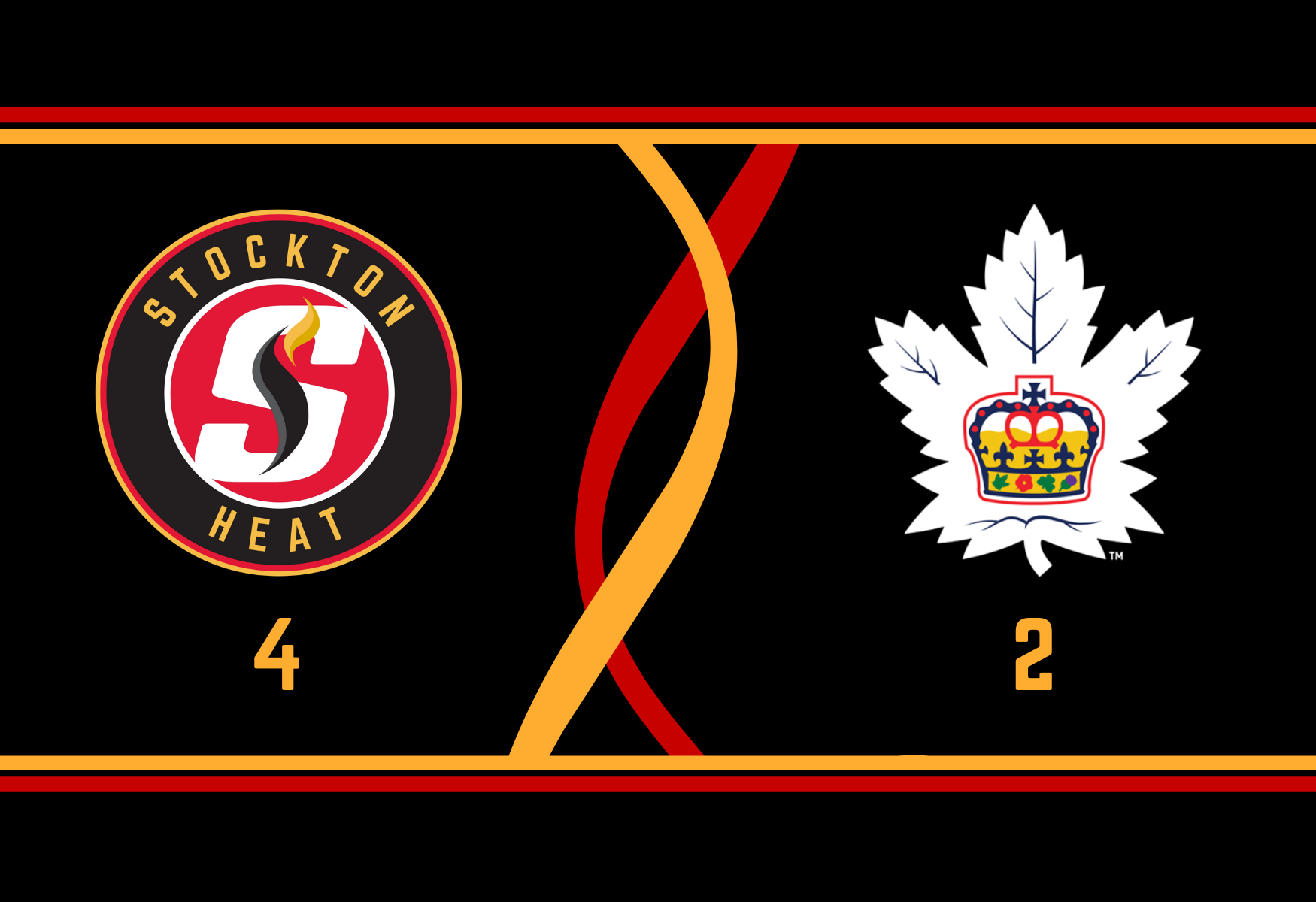 Photo credit: Graphic by Mike Gould
By Mike Gould
1 year ago
Comments
After being outscored 12-2 in their first two games of the 2020-21 AHL season, the Stockton Heat needed somebody to help them lock things down on Wednesday.
Enter the Wolf.
Rookie goaltender Dustin Wolf played incredibly well for the Heat on Wednesday, stopping 36 of 38 shots and making some highlight-reel saves en route to a 4-2 victory.
Wolf’s first professional win came at the expense of a Marlies team that looked dominant at times in its first two games against the Heat. Toronto goaltender Andrew D’Agostini was superb for the visitors in their Sunday and Tuesday victories but, this time, it was Stockton’s goaltender who came up huge for his team.
Adam Ruzicka chipped in two goals for the Heat, both coming from setups by alternate captain Matthew Phillips. Heat captain Alex Petrovic scored the winner for Stockton, which now sits at 1-2-0 on the year.
Advertisement
Ad
Advertisement
Ad

The Heat have now allowed the first goal in all three of their games this season. Wednesday’s opener might have been the flukiest goal the Heat have allowed all year, with a cross-crease pass from Marlies forward Joseph Duszak bouncing past Wolf off the leg of defenseman Rob Hamilton.

By my count, that's the third Marlies goal to bounce directly in off Rob Hamilton this year. Joseph Duszak made it 1-0 early. #AHLHeat #CofRed pic.twitter.com/K2S0qHAB0P

By my count, that’s the third goal to elude Wolf this season after deflecting off Hamilton. Talk about bad luck for Stockton numbers 32 and 42.
The Heat made a troubling habit out of falling into massive holes in their first two games of the season. Wolf was instrumental in preventing the Marlies from adding to their lead, making numerous fantastic saves.
Advertisement
Ad
Advertisement
Ad

From there, the momentum began to swing heavily in favour of the Heat. They put the Marlies to the test, with the Emilio Pettersen line particularly generating a ton of chances.

The Pettersen-Pospisil-Tuulola line just put on an absolute clinic in the offensive zone. Bonus points to Connor Mackey for a couple real nice plays at the blueline. #AHLHeat #CofRed pic.twitter.com/oD11inFvtD

After killing the penalty shown at the end of the above clip, the Heat continued to push the play down in the Marlies’ direction. Finally, they beat D’Agostini for their first non-third period goal of the season, with defenseman Zac Leslie creeping in sneaking a shot between the pads of the Marlies’ goaltender.
Advertisement
Ad
Advertisement
Ad
Flames prospects Connor Zary and Colton Poolman both picked up their first professional points on Leslie’s first goal of the season, which came with just 1:02 remaining in the opening frame.

Zac Leslie gets his first of the year. Connor Zary and Colton Poolman pick up the helpers for their first pro points. 1-1 after one. #AHLHeat #CofRed pic.twitter.com/Q3Msyoz8gy

Emboldened by their late first-period goal, the Heat came out flying to start the second and finally managed to get their first lead of the season.
Matthew Phillips and Adam Ruzicka have formed an effective combination to start the year and they finally connected on a goal just 40 seconds into the middle stanza. Phillips drove to the high slot with the puck, leaving it for Ruzicka to chip over the glove of D’Agostini.
Advertisement
Ad
Advertisement
Ad
Heat defenseman Connor Mackey picked up his first AHL point, a secondary assist, on the 2-1 goal.

With a tenuous grasp on the lead, the Heat needed to get some saves from their goaltender.
Wolf showed no sign of being the same player who allowed five goals on 11 shots on opening day. He looked agile and confident in the Heat crease and displayed his great reflexes to rob former Flame Kenny Agostino with this kick save.

Wolf’s excellent play opened the door for the Heat to expand their lead, which they did at the 5:27 mark of the second. Captain Alex Petrovic scored his first goal with the Heat on a hard slapper from the point to make it a 3-1 game.
Advertisement
Ad
Advertisement
Ad
Heat rookie and Flames 2018 sixth rounder Emilio Pettersen nabbed his first AHL point on the play; Ruzicka contributed the secondary assist for his first multi-point game of the season.

The Heat entered the third period up 3-1 and looking to close out their first victory of the season. Wolf continued to steal the show early in the final frame, making an incredible lateral effort to prevent Duszak from scoring his second of the night.

Unfortunately for the Heat, Wolf couldn’t completely stem the tide forever. Just past the seven-minute mark of the third period, Marlies defender Teemu Kivihalme beat a screened Wolf from the point to cut the Heat advantage to one goal.
Advertisement
Ad
Advertisement
Ad

Teemu Kivihalme beats a screened Wolf and it's now 3-2 #AHLHeat with just under 13 to play. pic.twitter.com/xEZzvSb1yG

The Marlies followed up that goal with three consecutive power play opportunities. First, Mackey flipped a puck over the glass at the 8:01 mark, followed by a Rob Hamilton elbowing minor at 9:47 and a Justin Kirkland high stick at 11:06.
The Heat had to kill two separate two-man advantages for the Marlies. They surrendered seven shots while down at least one man in that five-minute stretch, but Wolf was unbeatable.
Finally, Stockton restored its two-goal lead late while on the power play late in the third period. Once again, it was Phillips connecting with Ruzicka, this time on a long stretch pass to send the Slovakian centre in on a partial break. Ruzicka fired his second of the night past D’Agostini to make it 4-2.
Advertisement
Ad
Advertisement
Ad

The Marlies ended up out-shooting Stockton by a count of 38-28, but the Heat made the most of their opportunities and their big guns produced.
Oh, of course, they also got incredible goaltending from Dustin Wolf. What a way to redeem himself after a nightmarish AHL debut.

Wolf was on the ball all night for the Heat. He was named the first star of the game, deservedly so.
Adam Ruzicka also looked dangerous all night, scoring two goals and peppering D’Agostini with eight shots. His chemistry with Phillips is becoming more noticeable with each passing game.

The Heat will finish their four-game series against the Marlies on Friday at 2:00 p.m. MT. As always, you can catch the game on AHL TV; I’ll be posting updates on Twitter at @miketgould.
Advertisement
Ad
Advertisement
Ad