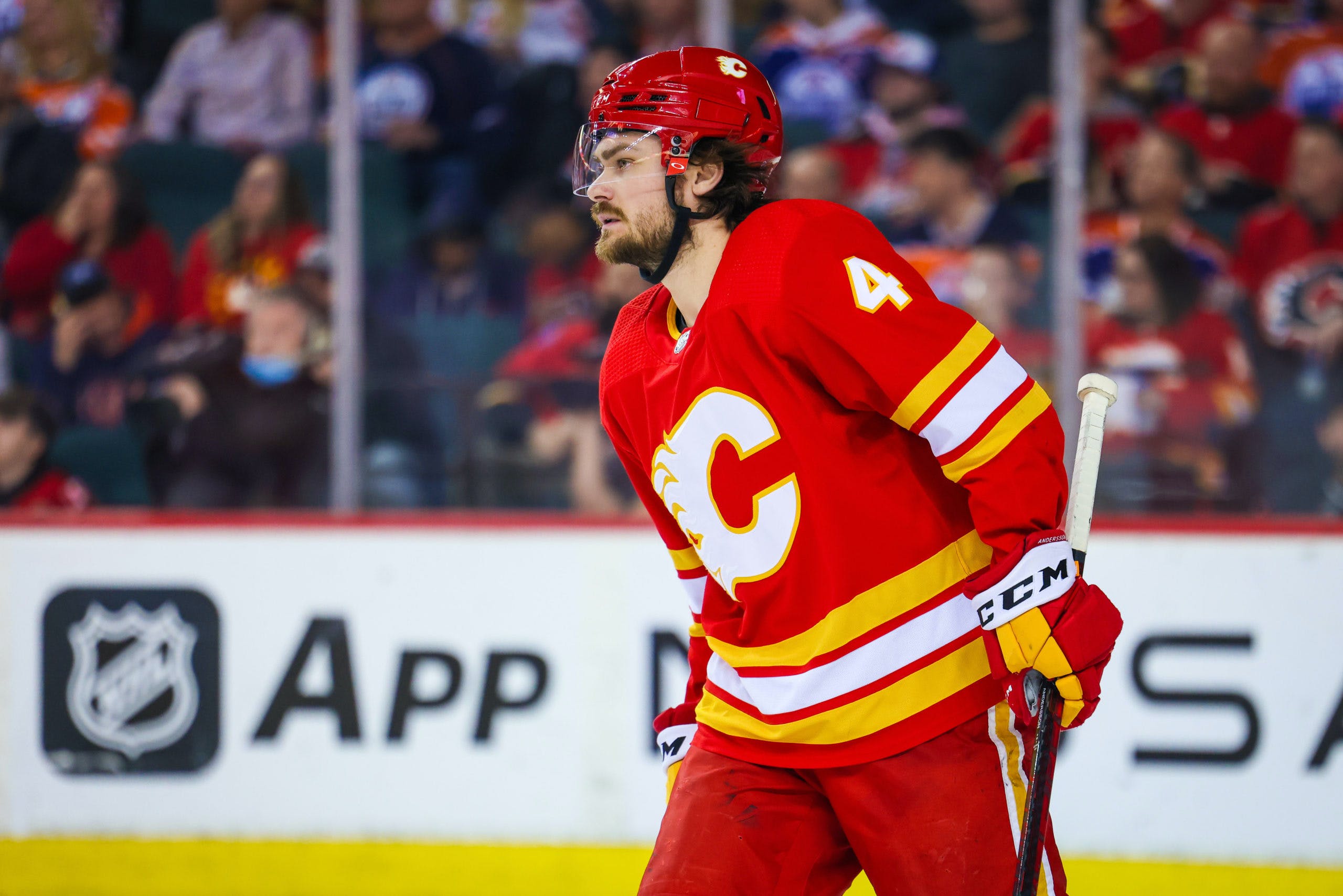 Photo credit: Sergei Belski-USA TODAY Sports
By Mike Gould
9 months ago
Comments
The Calgary Flames have had no shortage of excellent defencemen over the years.
Consider the following names: Al MacInnis. Pekka Rautakallio. Paul Reinhart. Gary Suter. Phil Housley. Robyn Regehr. Dion Phaneuf. Dougie Hamilton. TJ Brodie. Mark Giordano.
All these top-notch rearguards (and many more!) have suited up for the Flames since the franchise relocated from Atlanta in 1980. Giordano captured the Norris Trophy as the NHL’s top defenceman in the 2018–19 season; MacInnis won the Conn Smythe Trophy as the league’s playoff MVP in 1989.
@Rasmus Andersson is only just starting out on his journey toward potentially becoming one of the Flames’ all-time greats at his position. He has a long way to go to catch even Phaneuf or Reinhart, let alone Giordano and MacInnis.
Last season, it looked like Andersson might never get there. The Malmö product endured through a disastrous 2020–21 campaign both for himself and the Flames, struggling mightily on both sides of the puck as Calgary failed to qualify for the playoffs in the underwhelming North Division.
Advertisement
Ad
Advertisement
Ad
This year, things couldn’t be more different for Andersson. Even considering how his defensive results have rebounded, Andersson’s improvement in that regard pales in comparison to how his offensive output has skyrocketed.
Despite scoring on just 3.4 percent of his shots through his first 65 games with the Flames in 2021–22, Andersson already has a career-high 40 points (four goals, 36 assists). He currently ranks fifth on the Flames in scoring.
With his highlight-reel goal against the Arizona Coyotes on March 25, Andersson became just the 13th defenceman in Calgary Flames history to score 40 points in a single season.
Most of the Flames defencemen who reached the 40-point plateau before Andersson did so during the high-scoring 1980s and early 1990s. MacInnis, Suter, Reinhart, and Pekka Rautakallio all soared well past 40 points with Calgary multiple times in the ’80s (with MacInnis topping out at a jaw-dropping 103 points in 1990–91).
Advertisement
Ad
Advertisement
Ad
A half-dozen different Flames defencemen have combined for 16 seasons of at least 40 points since 2000–01. Here are all six of those individuals, listed in order of their most productive season while wearing the Flaming “C”:
Of note: Giordano and Phaneuf were both named finalists for the Norris Trophy in the wake of their respective seasons listed above, with Giordano beating Brent Burns and Victor Hedman for the award (Phaneuf finished second to Nicklas Lidstrom).
Andersson still has 17 games left to add to his point totals in the 2021–22 season. The 25-year-old Swede is currently on pace to become only the fifth different Flames defenceman to reach 50 points in a single season since 2000.

Rasmus Andersson is on pace for 50 points as a D with the #Flames this season.

That's only happened six times since 2000:

Paired with @Noah Hanifin to begin the 2021–22 season, Andersson has remained a mainstay on the Flames’ top five-on-five unit all year long and is also averaging a career-high 22:28 in all situations.
Advertisement
Ad
Advertisement
Ad
The Flames have absolutely dominated this year with Hanifin and Andersson on the ice. In 980:16 spent together at five-on-five, the duo has helped the Flames outscore their opponents 52–37 while controlling 57.64 percent of the expected goals (according to Natural Stat Trick).
Andersson has rapidly climbed the league’s defensive scoring leaderboard. While he currently ranks 19th among NHL defencemen in scoring for the entire 2021–22 season, Andersson jumps up to fifth place when considering only games played since the beginning of February.

After Giordano departed for the Seattle Kraken last July, it looked as though the Flames might struggle to make up for the loss of their former captain’s undeniable contributions at both ends of the ice.
Instead, Andersson has thrived in his increased role and is more than earning the six-year, $27.3 million contract extension he signed in 2020. Without Andersson’s resurgence, the Flames likely aren’t anywhere near the top of the Pacific Division right now.
Advertisement
Ad
Advertisement
Ad
No, Andersson isn’t alone in excelling with the Flames this year. Chris Tanev has continued his tremendous defensive play from the 2020–21 season; Oliver Kylington has become one of the most exciting players on the team; Hanifin has been a rock on Andersson’s left side; Nikita Zadorov and Erik Gudbranson have both enjoyed great stretches on the bottom pair.
However, it’s worth singling out Andersson for his swagger and vastly improved play in the wake of what was a particularly down season for him. He’s currently playing with more confidence (and that’s saying something) than we ever saw from him during his three previous full NHL seasons.
Andersson is carrying the puck with newfound authority and has cemented himself as a mainstay on the Flames’ top power-play unit. In the span of less than a year, Andersson’s $4.55 million cap hit has gone from being slightly worrisome to looking like a bargain.
Advertisement
Ad
Advertisement
Ad
After the Flames entered this season without a firmly established No. 1 defenseman, Andersson emerged to become a leader of arguably the strongest top-to-bottom defensive group Calgary has seen in more than a decade.
That’s something worth celebrating.