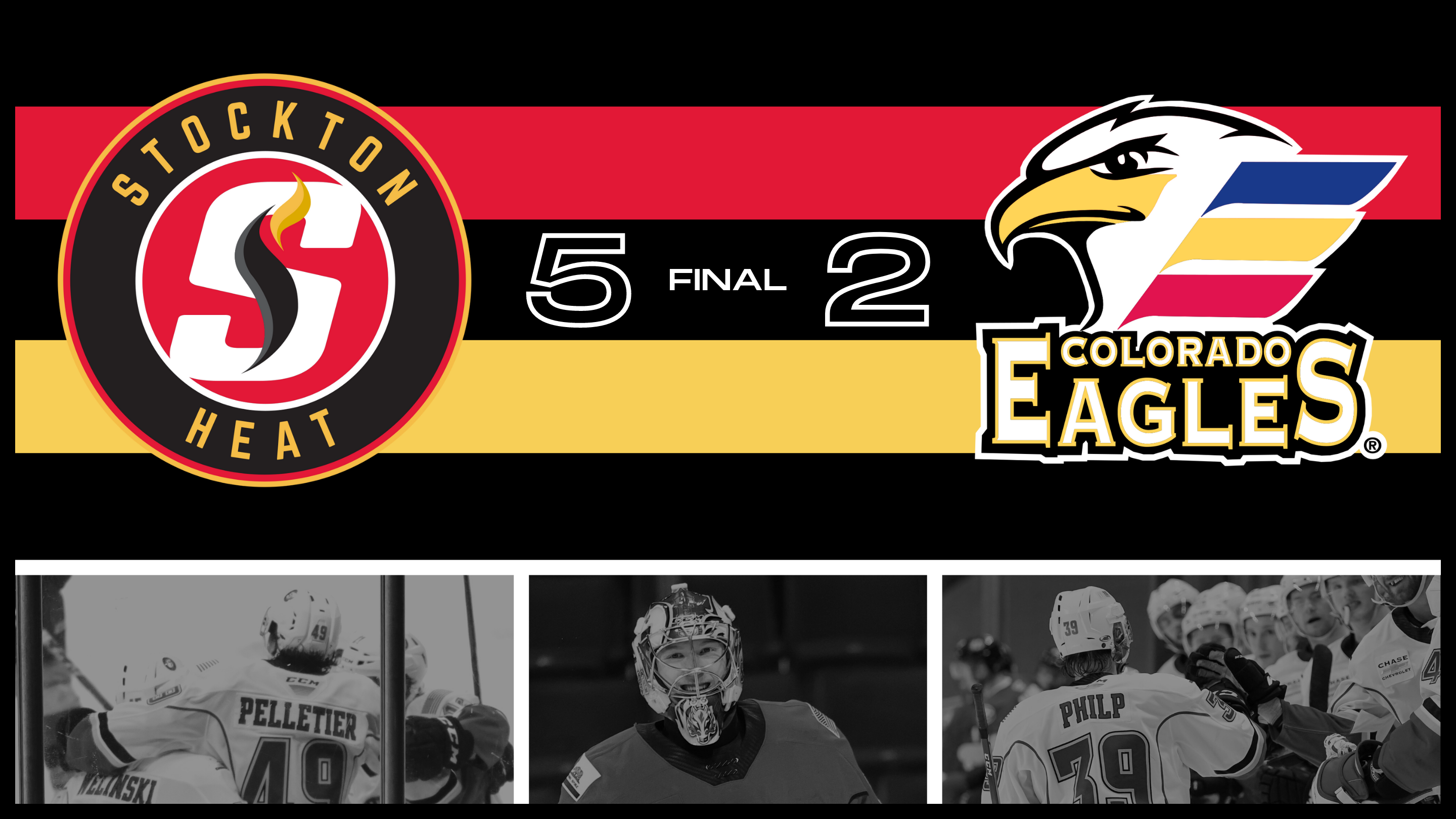 Photo credit: Graphic by Mike Gould
By Paige Siewert
1 year ago
Comments
Game two of the Heat’s weekend series against the Colorado Eagles took place on Saturday night. They hosted them at home for their Teddy Bear toss night where Jakob Pelletier would open scoring up in the second period to cause the Bears to hit the ice. The Heat would go on to score four more on the night and beat the Eagles by a final score of 5-2.

All four Heat goals in the second period came from four different skaters. It wasn’t until the third, where one of them would pick up their second goal of the night. While the Heat historically score their first goal on Teddy Bear night in the first period, that was not the case in this one. Their first period was played pretty evenly. Each side had their opportunities and put up a few shots. The goaltenders held it down, however. Stockton finished the first period ahead 9-8 in shots. It wasn’t until the second period that the Heat’s production broke open.
Jakob Pelletier started things off at the 3:12 mark of the second period. This goal initiated the Teddy Bear toss and earned him the title of the first Heat rookie to score the Teddy Bear toss goal in team history.
Advertisement
Ad
Advertisement
Ad

They took a delay to allow the arena staff to clean up the donations and this 1-0 score would hold until the last five minutes of the period. Connor Mackey made a smart play to protect the puck and passed it up to Walker Duehr. Duehr would be given the time and space for a full slap shot wind-up and finds the back of the net on it.

Connor Mackey makes a smart play to feed the puck to Walker Duehr, whose beautiful shot extends the Heat's lead to 2-0. #AHLHeat pic.twitter.com/4G2PfGUxaG

Eetu Tuulola also wanted in on the scoring action and comes up on the rush to beat Trent Miner and take the opposing goaltender out of the game 32 seconds after Duehr’s goal.

Eetu Tuulola off the rush. He scores Stockton's third of the night, resulting in a goaltending change. #AHLHeat pic.twitter.com/iQhN4RcUxr

Even with a new goaltender, it didn’t take Stockton long to beat him too. The Heat were on their third penalty kill of the night when the Eagles turned the puck over and gave Eetu Tuulola and Luke Philp a 2-on-1. Philp would go on to score the fourth Heat goal of the night and the fourth Heat shorthanded goal of the year at 18:02 in the second.
Advertisement
Ad
Advertisement
Ad

Colorado turns over the puck giving the Heat a 2-on-1. Eetu Tuulola feeds Luke Philp for the Heat's 4th shorthanded goal of the year and 4th goal of the night. #AHLHeat pic.twitter.com/VrTO91J39A

They ended the second period comfortably up 4-0. The Eagles started to show signs of life in the third period, but their efforts ultimately came up short. A pair of unanswered goals let their score climb to 4-2, but before it could go any further than that, time was running out.
Late in the third, the teams were serving coincidental roughing minors and the Eagles opted to pull their goalie to get a 5-on-4. Walker Duehr was able to get the puck out of the Heat’s zone and took a shot at the empty net that went in with ease. The fifth Heat goal of the night pretty much locked it down and took any hope away from the Eagles for a comeback in the last two minutes of the game. The Heat would go on to win 5-2 with shots narrowing up to 30-28 for the Heat and Dustin Wolf earning another regulation win.
Advertisement
Ad
Advertisement
Ad

Prior to the beginning of this game, there were a few lineup announcements regarding three Heat regulars.

Martin Pospisil also did not play in Friday’s game but his timeline for return could be quick depending on the nature of his illness. Justin Kirkland did play on Friday and led the team in shots that night with seven. He has found success in the Heat’s shootouts as well so hopefully, his absence is not a lengthy one.
Kevin Gravel has not been in the lineup for the Heat since their game on Nov. 26 against the Colorado Eagles.

The Heat only have three more games in December and one more to go before they go on a week break for Christmas. Their next match-up will be on Wed., Dec. 22 against the San Diego Gulls. After that, they will take the weekend off and be back at it a week later on Wed., Dec. 29 against the San Jose Barracuda on the road then on New Year’s at home against the Barracuda once again.
Advertisement
Ad
Advertisement
Ad
At this point, there has not been any direct trickle-down from the Flames COVID-19 situation so these games will play as scheduled for the time being. Puck drop for their next game will be at 8 p.m. MT this coming Wednesday.