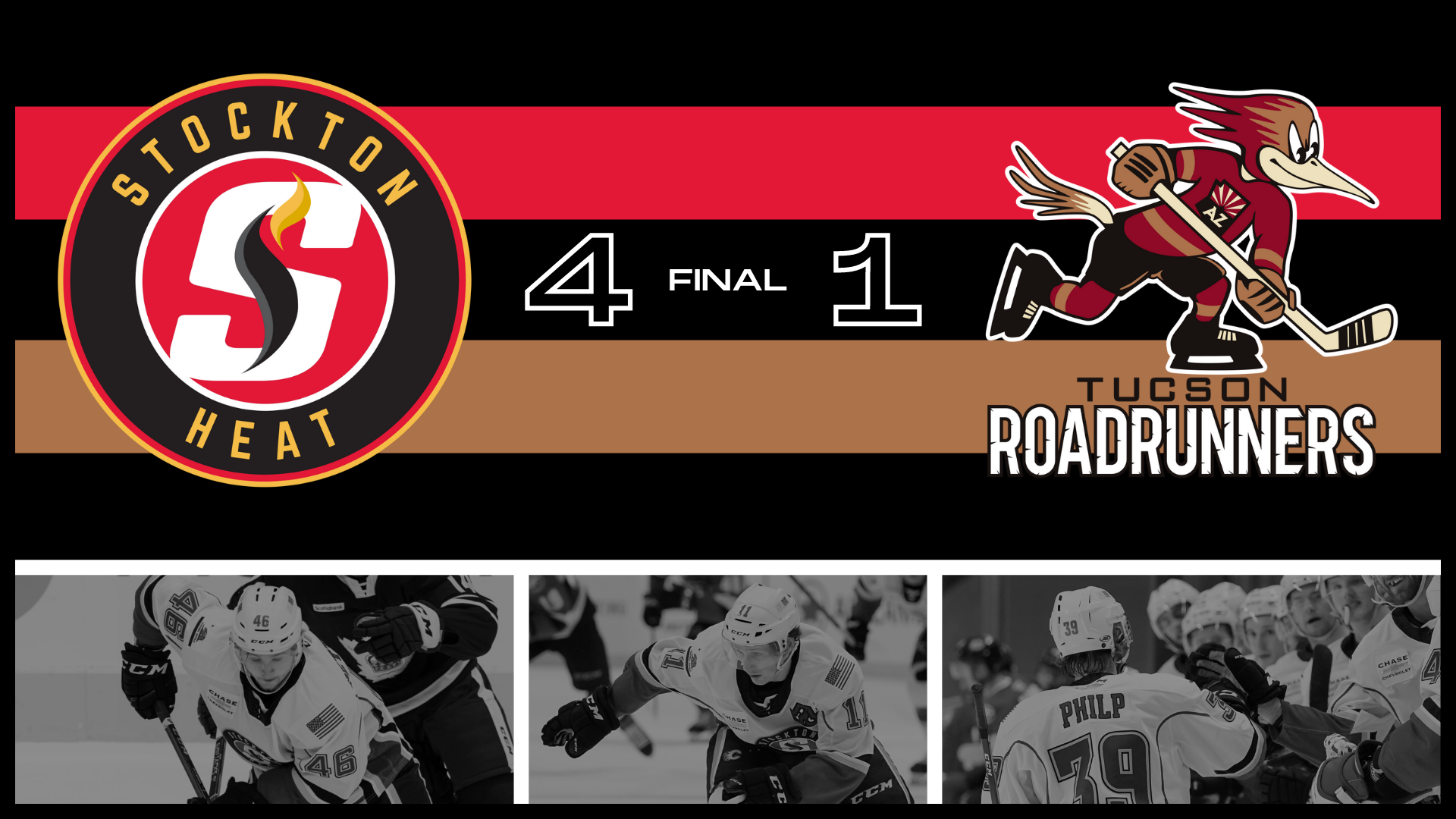 Photo credit: Graphic by Mike Gould
By Paige Siewert
1 year ago
Comments
The Stockton Heat finally returned home for their first game of 2022 at the Stockton Arena. After a Covid-related delay affecting their Friday night game, they were able to host the Tucson Roadrunners for their second and final game of the week. The Heat got some mojo back after their Wednesday night loss against the Ontario Reign and pick up a 4-1 win on Saturday night.

Oftentimes, teams find success when they score first. That was the case for the Heat in this game. The Heat have lost the opening game of all of their series against the Tucson Roadrunners this year. Those were two-game series. This one was just a one off and it gave the Heat an opportunity to pull ahead in the season record.
Ryan Olsen lit the lamp for the first time this season just 5:21 into the first period. He got a stick on Connor Mackey’s shot from the blue line for a tip-in goal. This was Olsen’s 16th game of the season and his first point of the year.

Right place, right time, and a tip from No. 9. pic.twitter.com/pWcgadP4yx

Just past the midway mark of the second period, Matthew Phillips also was in the right place at the right time and buried a rebound at the front of the net. Bryon Froese and Eetu Tuulola picked up assists on Phillips’ 13th goal of the season.
Advertisement
Ad
Advertisement
Ad

This resulted in the first period coming to an end with the Heat up 2-0 and with a slight edge in shots at 13-12. The second period did not bring a large amount of noteworthy action. Only a penalty a side and not a lot of whistles. It got down to the last minute of the second period with the Heat on their first and only power play of the night when Glenn Gawdin tapped in the Heat’s third goal of the night. His goal came at 19:06 and was assisted by Emilio Pettersen and Matthew Phillips.
In the third period, the Roadrunners were able to get a goal back with 5:03 to go in regulation off a pretty harmless looking shot on their power play. Werner probably would have liked that one back but it wasn’t detrimental to their game overall.
Advertisement
Ad
Advertisement
Ad
The Roadrunners looked for any other opportunity to get a couple more goals back and pulled their goalie at 17:38. They weren’t successful as Walker Duehr made a diving play to get the puck up to Glenn Gawdin, who scored an empty-netter. This would finish up scoring for the night and give Adam Werner a much-needed bounce back game and the Heat a great start to their 2022 on home ice.

The bad news was the Heat were down more players prior to this game. The good news was they were still able to pull together a win despite that. Absences included Connor Zary out with an upper-body injury as well as Jakob Pelletier and Justin Kirkland as new additions to the Covid-19 protocol.

Players out today for Stockton:

If they are cleared to play out of protocol, Luke Philp, Martin Pospisil and Colton Poolman could be back in the next couple of games. The timeline for the others is uncertain at this time.
Advertisement
Ad
Advertisement
Ad

Filling in the holes

The Heat needed to do a little bit of moving around this week to fill in some recent gaps that came up in their roster. On Jan. 14, the Heat recalled right-winger Reid Perepeluk from the Kansas City Mavericks. He has played in 24 games with the Mavericks this year and has earned three assists. He played his first game for the Heat and his first game in the AHL on Saturday’s game against the Roadrunners.
Another player the Heat added was Mason Mitchell on a PTO. Mitchell is an Edmonton product that played quite a bit of hockey in Calgary growing up. He has bounced around the ECHL and AHL the last couple of seasons and had been playing for the Cincinnati Cyclones this year. In 17 games this season, he has earned four goals and six assists. Mitchell also played in this game for his Heat debut.
Advertisement
Ad
Advertisement
Ad

The Heat are done with their road games until early February. They will play another four games on home ice with their next one taking place on Wednesday against the San Diego Gulls. Game time is 6:30 p.m. MT.