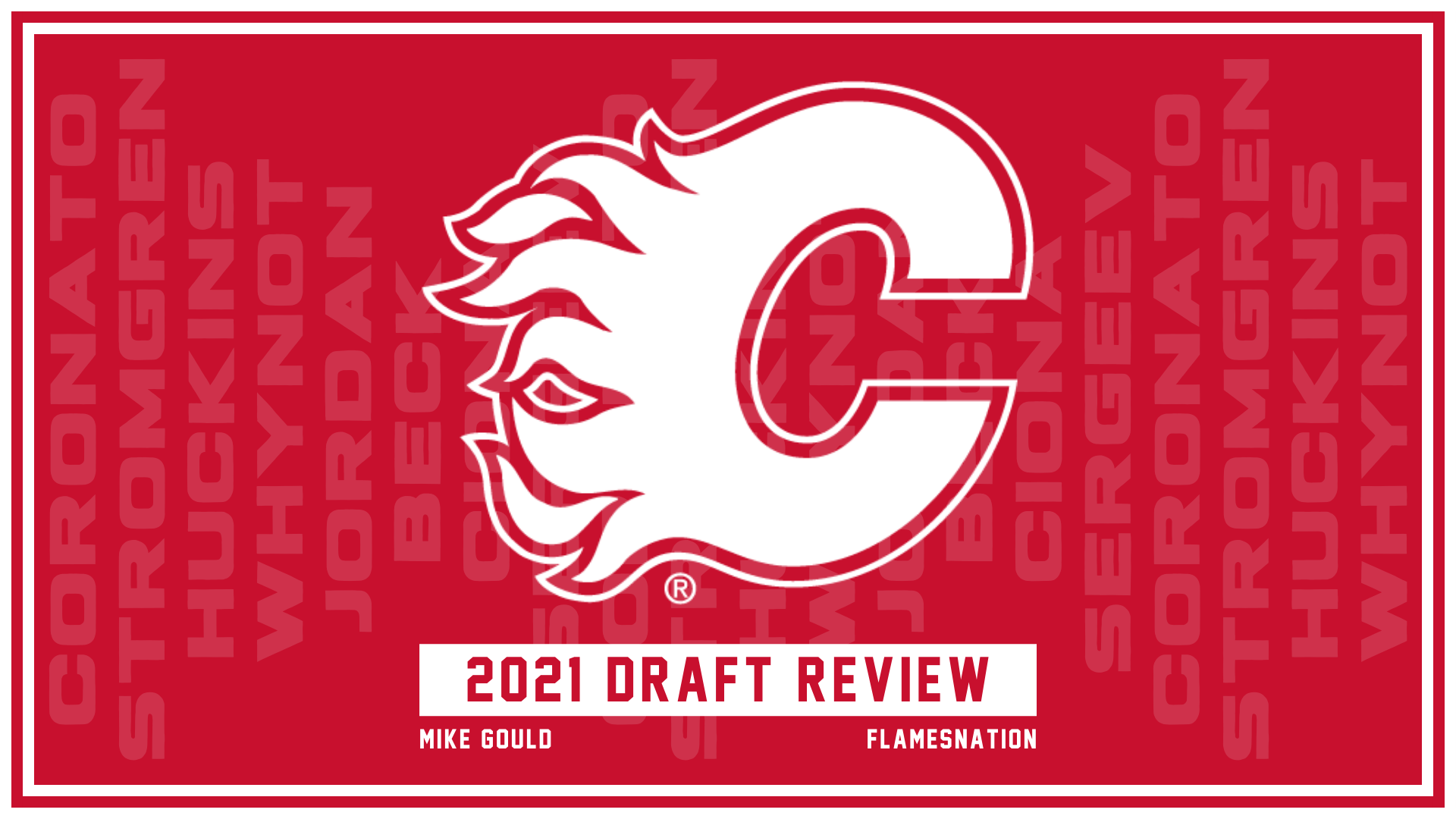 Photo credit: Mike Gould
By Mike Gould
1 year ago
Comments
The Calgary Flames entered the 2021 NHL Entry Draft with seven picks. They exited with eight brand-new prospects.
Flames general manager Brad Treliving traded down from the 84th selection in the 2021 draft — previously acquired from Edmonton in the Milan Lucic trade — to add picks 89 and 168.
Aside from that deal, the Flames used all the selections they had at their disposal coming into the first round on Friday. Here’s the rundown on each new player the Flames added to the organization on July 23 and 24.

Picked: First round, 13th overall
Coronato is a skilled goal-scorer who said in a Friday press conference with Calgary media he “feels really comfortable playing all three” forward positions. He has 185 pounds on his 5’10” frame and earned the nickname “the Bison” while playing with the USHL’s Chicago Steel for his willingness to drive to the net.
Advertisement
Ad
Advertisement
Ad
One of the most talented right-handed forwards in the 2021 draft class, Coronato will report to Harvard University beginning with the 2021–22 season. He set multiple Steel franchise records in 2021–22, including the team’s single-season goal-scoring mark (with 48 in 51 games). Coronato also became Chicago’s all-time leader with 66 career goals for the team.
Here’s a brief excerpt from FC Hockey‘s scouting report on Coronato:

Coronato is an offensive threat every time he steps onto the ice. He’s an all-situations player that shows strong puck skill and great transition. He needs to improve his explosiveness and decision-making at times.

The Flames retain exclusive rights to negotiate a contract with Coronato until Aug. 15, 2025.

Picked: Second round, 45th overall
Strömgren is a wiry Swedish forward who actually weighs approximately 10 pounds less than Coronato despite being five inches taller. He played very well as a 17-year-old with MODO Hockey in Sweden’s U-20 Nationell league last season, leading his team both in goals (10) and points (18) while appearing in all 14 games.
Advertisement
Ad
Advertisement
Ad
A 6’3″ left-shot winger with good boots for his size, Strömgren should be a strong candidate to appear on Sweden’s U-20 World Junior team in each of the next two seasons if he continues to progress. He has a three-year deal to play in the Swedish Hockey League with Rögle BK; assuming the Flames are content with letting Strömgren develop overseas for the entire duration of the contract, he’ll be eligible to make the jump over to North America starting with the 2024–25 season.
FC Hockey ranked Strömgren 46th, one spot lower than where he went to the Flames. Here’s a piece of their report on the tall Swede:

Strömgren is a is a speedy winger with excellent hands. He can get himself into dangerous positions, but needs to improve his positioning ability. His effort can be inconsistent and his defensive positioning needs improvement.

Picked: Third round, 77th overall
Huckins, like Strömgren, stands 6’3″. Unlike his Swedish counterpart, he weighs 201 pounds. Huckins is a left-handed centre from New Brunswick who currently plays in the Quebec Major Junior Hockey League with the Acadie-Bathurst Titan.
Among first-year draft-eligible players, Huckins ranked seventh in the QMJHL with 32 points (14 goals, 18 assists) in 33 games. He also tied for 31st on the overall QMJHL scoring leaderboard. Huckins will return to the Q for the next two seasons and could make the jump to professional hockey in the Flames’ system starting in 2023–24.
Huckins ranked 155th on FC Hockey’s board (but placed 71st on both those of Bob McKenzie and Craig Button). Here’s a taste of what FC has to say about the Flames’ first of two 2021 third-rounders:
Advertisement
Ad
Advertisement
Ad

Huckins is a big forward who can play center or wing and has some intriguing skill, but also some inconsistencies to work out with his game. While he can show flashes of good top-end speed and puck control, he can also be a rollercoaster with his decision- making and overall competitiveness on and off the puck. He is at his best with the puck on his stick in the offensive zone, corralling it before looking for chances to shoot or make plays, though there are times when his puck-handling isn’t quite fluid enough. Recovers pucks with his size and reach and tries taking them to the net. He is especially dangerous when he has the extra time and space allocated with the man-advantage.

Picked: Third round, 89th overall
Get your “Why not?” puns out of the way. (Here’s mine: “Should we trade down from pick 84?” “Why not?”).
Jokes aside: Whynot deserves to be kept in mind for many reasons beyond his name. He’s a productive left-handed defenseman who was projected by some — including Button and Draft Prospects Hockey — to go in the second round.
The 6’1″, 185-pound Whynot ranked as one of the QMJHL’s most productive defensemen in the 2020–21 season despite appearing in just 34 of the Halifax Mooseheads’ 43 games. Among first-year draft-eligible QMJHL rearguards, only William Trudeau (31 in 40 games) managed to best Whynot’s mark of 23 points.
FC Hockey ranked Whynot 148th in its guide and described him as a “fairly capable two-way defender.” Here’s more:

He reads plays well and can get the puck to open ice and streaking teammates. You’d like to see him handle the puck more often at 5-on-5 because he does seem to be able to provide more than he shows. On the defensive side, he displays competitiveness and smart positioning. He does an excellent job of closing the gap and driving attackers to the outside with body positioning and a long stick. Generally, when an opponent is coming down on him he is able to angle them to the wall and behind the net. He will definitely need to hit the gym as he lacks the power to truly be a physical force and separate players from pucks.

Advertisement
Ad
Advertisement
Ad
Like Huckins, Whynot is a 2003-born player who will return to the QMJHL for at least two more seasons. The Flames have until June 1, 2023 to sign him.

Picked: Fifth round, 141st overall
Jordan is an exceptionally agile defenceman currently playing with the Moose Jaw Warriors of the Western Hockey League. He received a rare “7” grade for his skating ability in Elite Prospects’ 2021 draft guide, with his stride being described as “closer to perfection than average.”
Advertisement
Ad
Advertisement
Ad
Elite Prospects ranked Jordan as the 36th-best prospect available in this year’s draft. FC Hockey placed him 64th. After advocating on Twitter for the Flames to select Jordan, PuckPreps scouting director (and our friend) Joel Henderson compared him to Carolina Hurricanes defenceman Brett Pesce.
Jordan currently stands 6’2″ and weighs 205 pounds. Here’s an excerpt from FC Hockey’s report on him:

Jordan’s game is based around his efficient skating ability, intelligence, and subtle platform skills which can fly under the radar but will allow him to carrying his game forward by adding ancillary skills. He isn’t flashy but is effective in facilitating play. He’s quick and clean on his feet, showing effectiveness in speed changes and angling with strong edgework.

Picked: Sixth round, 168th overall
Beck’s 2020–21 campaign was a casualty of the OHL suspending operations during the COVID pandemic. The 5’11”, 165-pound winger didn’t get the chance to play anywhere during his draft year but still went to the Flames in the sixth round.
During the 2019–20 season, Beck suited up for 56 games with the Ottawa 67s and ranked 10th on the team with 19 points (seven goals, 12 assists). Beck also placed 16th in scoring among all OHLers in their age-16 seasons.
McKeen’s Magazine ranked Beck as the 191st-best prospect available for the 2021 draft. In the McKeen’s draft guide, scout Brock Otten described Beck as a complete player with question marks:

Jack Beck is the kind of player you wish had better physical tools because the rest of the package is very solid. As an OHL rookie with the Ottawa 67’s, Beck did everything asked of him by the coaching staff. His processing ability and anticipation in the offensive end is among the highest in this draft class. However, with average size and average skating ability, projecting him as an NHL player becomes more difficult, especially without any viewings to go off of this season. Did he improve in any areas?

Sixth round pick Jack Beck, who wasn’t able to play with OHL Ottawa last year, sounds like he’s a motivated player going into next season.

“I have to show I’m the steal of the draft. That’s what I plan on doing next year.” #Flames

Picked: Sixth round, 173rd overall
Ciona was the third big forward to become a Flame on Saturday. The 6’2″, 205-pound left wing produced at a decent level with the WHL’s Seattle Thunderbirds in 2020–21.
With 13 points in 23 games, Ciona ranked fourth on the 2021 T-Birds in scoring (and fifth in points per game). He also finished second on the team with 11 assists. While Ciona only managed two goals as a WHL sophomore, he fired 47 shots on goal and only converted at a 4.26% rate. Expect him to become a more productive scorer next season.
FC Hockey ranked Ciona as the 271st-best prospect available for the 2021 draft. Here’s part of their scouting report on the Flames’ newest forward prospect:

Ciona presents as a meat-and-potatoes, straightline forward, however there is an understated intelligence in his game that allows him to always be in the right spots on the ice. Skating ability is a knock, as he struggles to make plays through weight shifts and his edges kill momentum. Still, he is hard on the forecheck and uses his size and strength to separate the opposition from possession.

Stop me if you’ve heard this before: Ciona will return to the WHL for the next two seasons (if not one more) and his exclusive signing rights with the Flames extend until June 1, 2023.
Advertisement
Ad
Advertisement
Ad

Picked: Seventh round, 173rd overall
Sergeev is a 6’3″, 192-pound Russian goaltender already playing in North America. He spent the 2020–21 season in the North American Hockey League — and won the 2021 Robertson Cup — playing with the Shreveport Mudbugs. Who wouldn’t want to be a Mudbug?
Born in December 2002, Sergeev went to the Flames in his first year of draft eligibility. According to Flames director of amateur scouting Tod Button, he’ll play for the Tri-City Storm in the USHL next season before heading to the University of Connecticut in fall 2022. Sergeev was drafted fourth overall by Tri-City in the 2021 USHL Entry Draft.
McKeen’s Magazine ranked Sergeev as the 124th-best prospect available in the 2021 draft class. In the McKeen’s draft guide, scout Ryan Wagman described Sergeev as a competitve goaltender who stood out in the NAHL:
Advertisement
Ad
Advertisement
Ad

While this year’s crop of goalies in the USHL was largely unimpressive, the NAHL delivers a few netminders of note, starting with Sergeyev, who put up easily the best numbers of any draft eligible tender in the league. The Russia native in his second year in North America plays an athletic, aggressive style, jumping to the lip of the blue paint, reading the play well. He combines excellent lateral mobility with ideal size. The next step in his development will be playing against better competition, likely starting with USHL Tri-City, which made him a top pick in the recent USHL Entry Draft.

As Sergeev’s career at UConn will not begin until 2022, the Flames will retain his exclusive signing rights until Aug. 25, 2026.

This is the only highlight I could find on YouTube of new Flames goalie Arseni Sergeev, but it's a nice one. #CofRed pic.twitter.com/CAjn3AC3LT