Advertisement
Ad
The good, bad and ugly of the Calgary Flames: Games 6-10 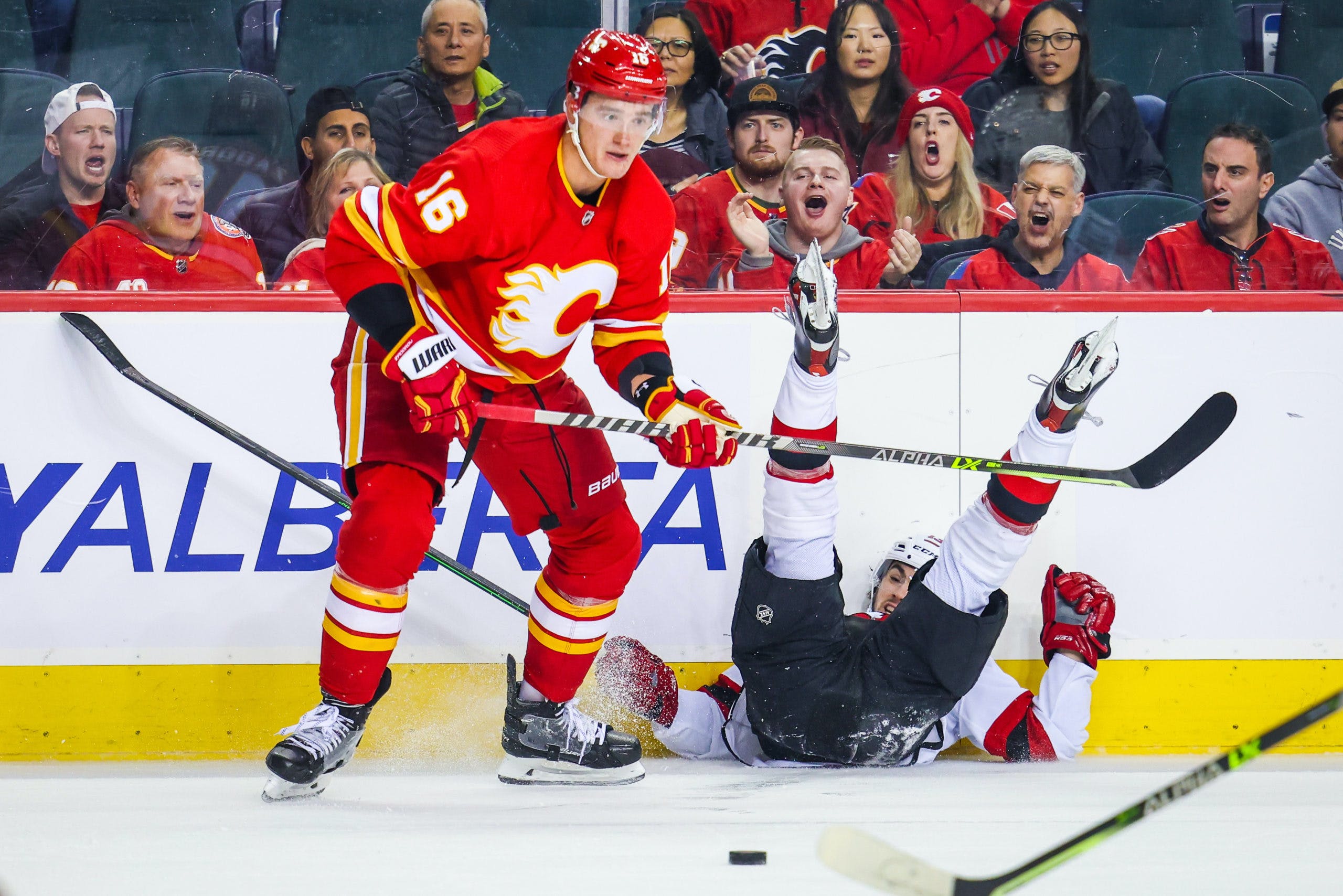 Photo credit: © Sergei Belski-USA TODAY Sports
By Robert Munnich
2 months ago
Comments
Welcome to the second edition of the good bad and ugly of this Calgary Flames season. My apologies for the delay in getting this article out. I have been away on vacation the last week or so. But better late than never, right?
Games 6-10 were a bit of a roller coaster for the Flames and their fans. It started out strong with a 4-1 win over the Pittsburgh Penguins in a great effort. Those good vibes did not last long as Calgary ended up losing their next four games to the Edmonton Oilers, Seattle Kraken, Nashville Predators and New Jersey Devils.
Lets take a deep dive into the good bad and ugly.

Jacob Markstrom looks like Jacob Markstrom again
Calgary’s Vezina trophy finalist looks to be back playing his brand of hockey after a bit of a shaky start. In his four starts from October 24th – November 6th, Markstrom had significantly improved on his numbers from the first five game segment of the season.
(Jacob Markstrom’s stats in all situations via Natural Stat Trick)
Advertisement
Ad
Advertisement
Ad
Markstrom is going to need to continue to put up strong numbers for the Flames if they want to accomplish their main goal of finishing in the top three of the pacific division. The Flames are currently on pace to score 261 goals, 32 goals less than last season. Playing great defensive hockey with good goaltending is how the Flames are going to get there. Markstrom is clearly a huge part of that.
The one area of improvement from the eye test is that Markstrom is not letting in those momentum killing goals. In his first four starts he let in multiple weak goals. The type of goals that sink the energy levels of their team and swing all the momentum in favor of their opponent. But those weren’t happening in these four starts which is a great sign for the Flames.
Advertisement
Ad
Advertisement
Ad

Jacob Markstrom makes another big save on RNH pic.twitter.com/QNpqNsILfN

Jacob Markstrom with a huge save on RNH pic.twitter.com/ppR3K8oPgJ

Nazem Kadri continues to produce
The Flames prized offseason free agent signing, Nazem Kadri, has continued his strong play early in the 22-23 season. In games 6-10 he led the team in points and goal with 5 and 4 respectively. He has been the catalyst for the Flames offence at 5 on 5 as all four of his goals over this span came at 5 on 5.
Kadri stepping up has been huge for a Flames team with Johnathan Huberdeau, Andrew Mangiapane and Dillon Dube all struggling to produce offence at levels fans expected heading into the season. Kadri is bringing it on the score sheet and also seems to be providing leadership through showing grit, fight, and emotion in games when that is lacking from the rest of the team. The one interesting thing to note about games 6-10 for Kadri is that the production was fantastic the process may have been a little flawed as over those five games, he had an expected goals for % of 40.59%. That number may have been brought down because of the play of his linemates Dillon Dube and Andrew Mangiapane.
Advertisement
Ad
Advertisement
Ad
Shoutout to the Flames’ third pairing
Nikita Zadorov and Michael Stone were outstanding for the Flames during this five-game segment. They produced the best results on the team in a bunch of different categories. Zadorov and Stone were on the ice together at 5 on 5 for nearly forty minutes. In those minutes, the Flames outscored the opposition 6-1 (85.71% GF%), had a CF% of 63.95%, xGF% of 65.05, and a HDCF% of 80%. Those are elite numbers.
It’s too bad the Flames were not able to take advantage and win a game or two more with the bottom pair putting up such incredible numbers.
Unfortunately, the Flames have run into injury troubles, including an undisclosed injury to Stone.

We have a couple beauties from Nazem Kadri.

Darryl Shaking Up The Lines
Very rarely do I find myself questioning Darryl Sutter and his decision making. But I was scratching my head when he put together the following lines together at practice on Halloween.

I certainly like the idea of putting Huberdeau-Kadri-Mangiapane together. But the ugly part of this lineup is putting Milan Lucic in the top six. Lucic is fine in his role as a fourth line player. But he is not a top six player anymore. As many people have pointed out, Lucic hasn’t scored a goal using his stick since Jan. 22, 2022 against the Oilers.
The other glaring issue with the Flames lineup right now is the lack of speed and skill in the top nine of the forward group. This team needs to bring in another forward or two to supplement their high-end players. The easy, obvious move to make is to bring up Matthew Phillips, but we’ll save that for another article.
Advertisement
Ad
Advertisement
Ad