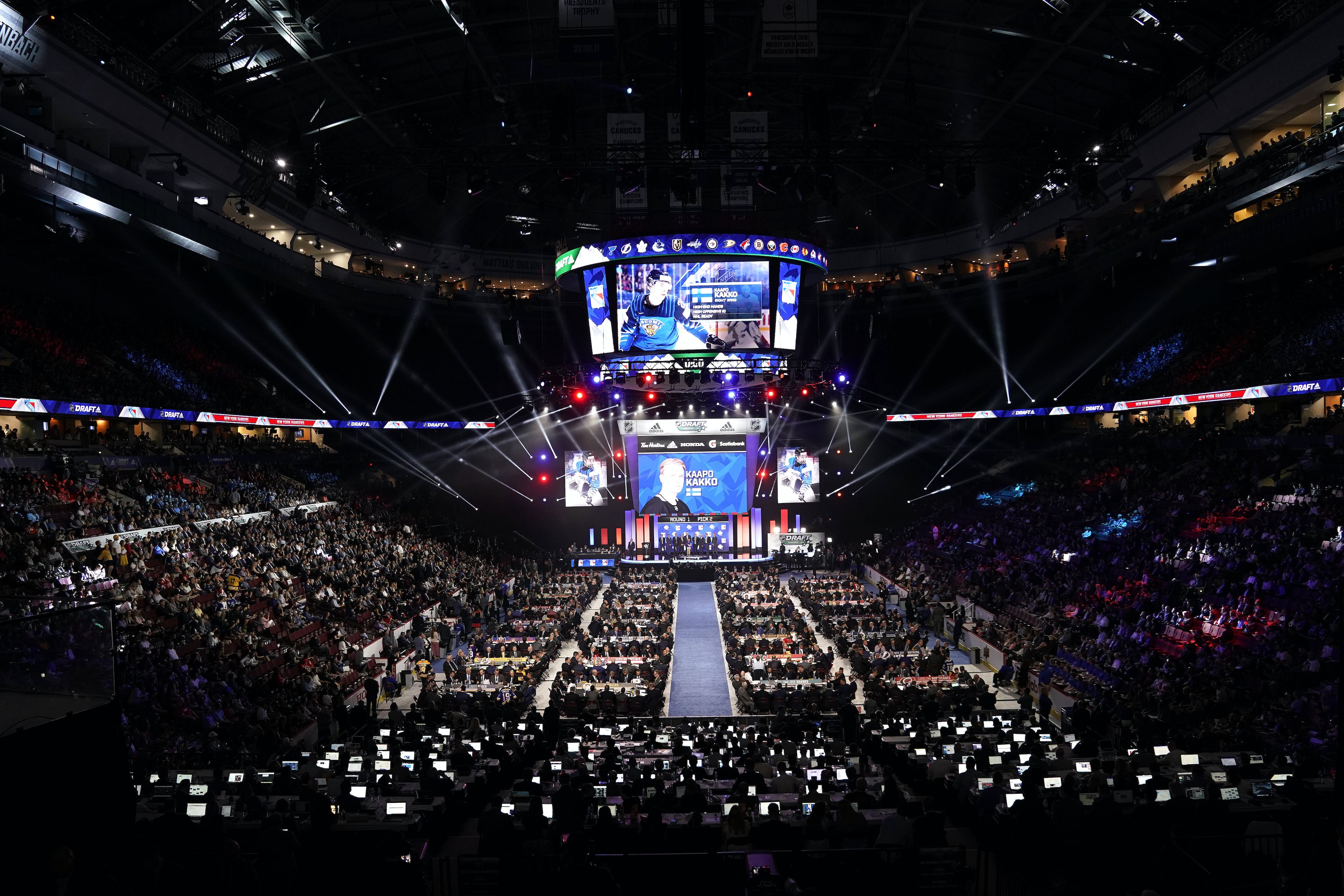 By Mike Gould
1 year ago
The first round of the 2021 NHL Draft will take place on July 23. Following the results of the draft lottery, the Flames hold the 12th overall selection and will have a chance to add a high-end prospect to their organization.
In 2020, the Flames selected high-scoring centre Connor Zary from the Kamloops Blazers. This year, they might have the chance to select another offensively skilled Blazer forward who actually scored more goals than Zary in 2020–21 despite being a year younger and appearing in nine fewer games.
Let’s take a closer look at what makes Logan Stankoven such a highly-touted prospect.

Stankoven is a right-shooting forward who stands 5’8″ and weighs 170 pounds. Capable of playing both centre and right wing, he emerged as one of the Western Hockey League’s best goal-scorers as a 16-year-old rookie with Kamloops in 2019–20.
While he may be one of the smaller players in the draft, he’s also one of the most skilled. In a profile for McKeen’s Magazine (paywall), Arlo Schulz compared Stankoven’s draft pedigree and versatility to that of one of the frontrunners for this season’s Conn Smythe Trophy.

It will be interesting to see if the team drafting him chooses to develop him as a center or winger. His skating ability, shot, forechecking, and lack of size would point to an eventual spot on the wing at the pro level, but the Blazers have insisted on keeping him down the middle and Stankoven by no means has looked out of place there, although the pro game against men might be a different story. A potential home-run pick, like many others whose size scared away suitors (Brayden Point comes to mind).

Stankoven is a terrific shooter who has scored goals at an astounding rate in every league where he’s played. As a 15-year-old playing in British Columbia’s U-18 AAA league in 2018–19, he absolutely dominated despite being two years younger than much of his competition.
He joined the Blazers for the final 13 games (regular-season plus playoffs) of that season before becoming a full-time WHL player in 2019–20. Stankoven immediately emerged as one of the best goal-scorers in the entire league. Schulz elaborates:

Simply put, Stankoven’s shot is elite. He had the best shot I have ever seen on a 16-year old in the WHL in 2019-20, scoring 29 goals in a shortened season despite not playing on the top line. His wrist shot is off the charts, generating incredible velocity combined with deadly accuracy and a quick release. From time to time, he will incorporate a toe drag to change the release point fooling goalies, and is able to shoot with the puck in any position relative to his body. He can shoot off the rush without breaking stride, or simply pick his spot from the left half-wall on the powerplay.

Stankoven is an immensely talented forward who matches his skill level with his tenacity, as Josh Tessler of Smaht Scouting explains:

Similar to Frölunda’s Lucas Raymond, Stankoven plays a high-tempo game and is a menace in the offensive zone. He rushes towards the puck and plays the puck hard. Stankoven has elite forechecking ability and if his opponent has the puck along the boards in their own zone, he applies pressure to limit open lanes and capture possession of the puck. While some prospects are much stronger as a forechecker and are not as strong in the neutral and defensive zones, Stankoven is the opposite. When he is in his own zone and the neutral zone, he does not leave many gaps for his opponents.

Coming back to Connor Zary for a moment: Calgary drafted him after he scored 20 even-strength goals in 57 games with the Kamloops Blazers in 2019–20.
Only 17 WHL players scored more goals at even strength in 2019–20 than Zary did. Of those players, only three of them were (like Zary) in their draft years.
Stankoven scored 22 goals at even strength in 2019–20 despite being 16 years old. He led all WHL players of that age in 5-on-5 scoring by four goals, with projected 2021 top-five pick Dylan Guenther finishing second with 18.
Playing as Kamloops’ second-line centre (behind Zary), Stankoven received less time on the man-advantage and scored seven power play goals to Zary’s 15. Pick224 estimates Stankoven played averaged just 14:17 per game in 2019–20 compared to 17:30 for Zary.
In the shortened 2020–21 season, Stankoven played in just six of the Blazers’ 22 games before representing Canada at the 2021 IIHF World U-18 Championships. He amassed 10 points, including seven goals, in his brief stint with Kamloops; Stankoven’s 1.67 points-per-game rate ranked one spot ahead of Zary for fifth in the WHL (behind Guenther, Connor Bedard, Peyton Krebs, and Jake Neighbours).
Stankoven scored eight points (four goals, four assists) in seven games with Team Canada at the 2021 U-18 Worlds, helping his country win gold for the first time since 2013. He scored the tournament-clinching goal in a 5-3 win over Russia in the final game.