By Mike Gould
1 year ago
Welcome back to FlamesNation’s 2021 Flames Trade Targets series, in which our team of writers takes a look at some of the players around the league either in need of a change of scenery or rumoured to be on the market.
The Calgary Flames could use some more skilled players down the middle.
Yes, Elias Lindholm has shown plenty of promise since being shifted to the centre position to start the 2020–21 season. Lindholm scored 19 goals and 47 points in 56 games this season while contributing a total of 7.6 expected goals above replacement (xGAR), according to Evolving-Hockey.
While Lindholm looks like a solid option to fill the Flames’ number-one centre position, the players behind him in the depth chart all carry significant question marks.
Sean Monahan scored just 10 goals and 18 assists in 50 games this year. He battled through a hip injury for much of the season and was immediately shut down for the remainder of the season after the Flames were eliminated from playoff contention.
Once one of the league’s more effective offensive centres, Monahan has never been much of a defensive contributor but had always managed to outscore his deficiencies in his own end. In recent years, he’s dealt with a ton of different injuries and has seen his scoring output and offensive impact lessen significantly.
Between 2013–14 and 2018–19, Monahan contributed a total of 64.7 even-strength offensive (EVO) xGAR. In that six-year sample, he bottomed out at 7.5 EVO xGAR in 2016–17 and peaked at 16.2 the following season. In terms of even-strength defensive (EVD) xGAR, Monahan was a negative-impact player in all six of those seasons but his EVO value always dramatically outweighed his EVD.
In 2019–20, Monahan failed to score 50 points in a season for the first time since his rookie campaign. While he remained a force on the power play, he saw his EVO xGAR figure fall down to just 1.9. This past season, Monahan’s offensive play at even strength was worth negative-1.7 expected goals above replacement.
In short: Monahan has regressed offensively, big-time. The Flames can only hope he returns from his off-season hip surgery with a renewed spring in his step. Until then, it’s hard to see him as anything other than a question mark for this team.
Mikael Backlund also remains a Flame. The 32-year-old Swede has three years left on his deal and is fresh off a 32-point season in just 54 games. He ranked fourth on the 2020–21 Flames with 2.5 EVD xGAR. Backlund is still a valuable piece to have around, but the Flames might be best served to use him in a third-line role going forward.
The reason? Calgary probably needs to better emphasize scoring on its second line. Backlund is a great two-way player who excels when used as a primary match-up option, but he’s also scored 50 points only once in his career and has shown some minor signs of underlying regression.
Only nine teams scored fewer goals this season than Calgary’s 156 in 56 games. All of them missed the playoffs. If Calgary wants to return to the postseason, it’ll need to start setting higher expectations for offensive production out of its top-six forwards.
Lindholm will be on the first line. If Monahan comes back and looks like his old self, he could return to his #1C spot and shift Lindholm back over to his familiar right-wing position. Even so, with Backlund on the third line, the Flames will need somebody to serve as a second top-six pivot.
Nick Schmaltz, like Backlund, has only scored 50 points once in his career. He also just turned 25 and spent the majority of the last three seasons playing on one of the most offense-dry teams in the NHL.
In his “31 Thoughts” column on May 11, Sportsnet’s Elliotte Friedman hinted at future changes in the desert while including this interesting tidbit:

Crazy rumour that isn’t happening: a Nick Schmaltz buyout. It would be at one-third of his remaining value because he’s 25, but that idea is not being considered.

This isn’t the first time Schmaltz’s name has come up in a Sportsnet report. Friedman and Chris Johnston linked Schmaltz with the Buffalo Sabres in a piece written on the eve of last October’s unrestricted free-agency period.
The Chicago Blackhawks selected Schmaltz in the first round, 20th overall, of the 2014 NHL Entry Draft. On Nov. 25, 2018 — a little over four years later — Chicago general manager Stan Bowman traded Schmaltz to the Coyotes in exchange for forwards Dylan Strome and Brendan Perlini.
At the time, Schmaltz was coming off a sophomore season where he had scored 52 points (21 goals, 31 assists) in 78 games. He started the 2018–19 campaign with just two goals and 11 points in 23 games but quickly acclimated to his new team, scoring 14 points in 17 games before suffering a season-ending knee injury.
Later that season, with Schmaltz still on the mend, former Coyotes GM John Chayka rewarded his young centre with a seven-year contract extension carrying an average annual value of $5.85 million.
Back at full health in 2019–20, Schmaltz led the Coyotes in scoring with 45 points (11 goals, 34 assists) in 70 games. He missed all 10 of the Coyotes’ post-season games after being on the receiving end of a headshot by Vegas Golden Knights forward Ryan Reaves in return-to-play exhibition action.
Schmaltz has consistently been a good offensive play-driver as a Coyote. In 2019–20, he ranked fourth on the team by providing 3.5 expected offensive goals above replacement at even strength (according to Evolving-Hockey). Only Conor Garland, Christian Dvorak, and Jakob Chychrun ranked ahead of him.
Despite continuing on a similar scoring pace (32 points in 52 games) in 2020–21, Schmaltz followed closely behind Phil Kessel, Chychrun, Garland, and Clayton Keller on the Coyotes’ points leaderboard. He remained an offensive force, again posting a 3.5 EVO xGAR (albeit in 18 fewer games) to rank behind Chychrun, Keller, Kessel, and breakout rookie Michael Bunting.
Schmaltz’s 6.6 total xGAR in 2020–21 placed him third on the Coyotes. Evolving-Hockey assessed his play as having been worth $6.5 million in 2019–20 and $4.1 million in 2020–21, averaging right in the ballpark of his $5.85 million AAV.
A right-handed centre and former teammate of Matthew Tkachuk at the 2016 World Juniors, Schmaltz has five years remaining on his long-term deal and would give the Flames some much-needed additional offensive skill both in the top-six and on the power play.
Schmaltz is a fast, average-sized (6’0″, 177 pounds) scoring forward who naturally plays centre but can slot in at wing. He’s quick with his stick both in terms of handling and shooting the puck.
In the 2020–21 season, Schmaltz averaged 17:03 of ice-time per game and fired the puck on goal 105 times in just 52 games. He scored on just 9.5% of those shots, markedly lower than his career mean of 12.3%. He played exactly 200 minutes fewer than in 2019–20 but took 10 more shots than in the previous year.
According to Natural Stat Trick, Schmaltz ranked second among qualified Coyotes skaters (min. 10 GP) in 2020–21 with a 53.55% on-ice expected goals rate at even strength. Arizona recorded 144 high-danger chances at even strength and allowed just 120 with Schmaltz on the ice, giving him a team-best 54.55% HDCF rate.
Schmaltz was one of the Coyotes’ more sheltered players, although not uncommonly so. His 65.15% 5v5 offensive-zone faceoff rate ranked fourth on the team, slightly ahead of fellow top-six forwards Garland (62.50%) and Keller (59.52%).
Scoring forwards tend to be deployed more often in the offensive zone because — hear me out — that’s where they score. This past season, Johnny Gaudreau lined up next to the opposing goaltender for 58.40% of his faceoffs.
If the Flames are looking for another versatile top-six forward who can help out on the right side, Schmaltz could be an appealing option. He’s a good scorer who drives play effectively and boasts an excellent shot.
Schmaltz carries a decent-sized ticket along with him but he’s shown he can play at a corresponding level. As with any acquisition, the Flames might need to get creative to fit another top-six forward’s salary up the cap. Derek Ryan is already coming off the books; the Mark Giordano, Milan Lucic, and Mikael Backlund deals will expire in successive seasons.
The Flames clearly need to add more scoring. Among North Division teams, only the Vancouver Canucks scored fewer goals — and the Flames had to use a late surge to pass them.
Is Schmaltz the right target? Will he even be traded? The Flames and Coyotes will answer those questions, in time.
For now: Do you think the Flames should pursue Coyotes forward Nick Schmaltz? Submit your take in the comments!
Uncategorized
Recent articles from Mike Gould 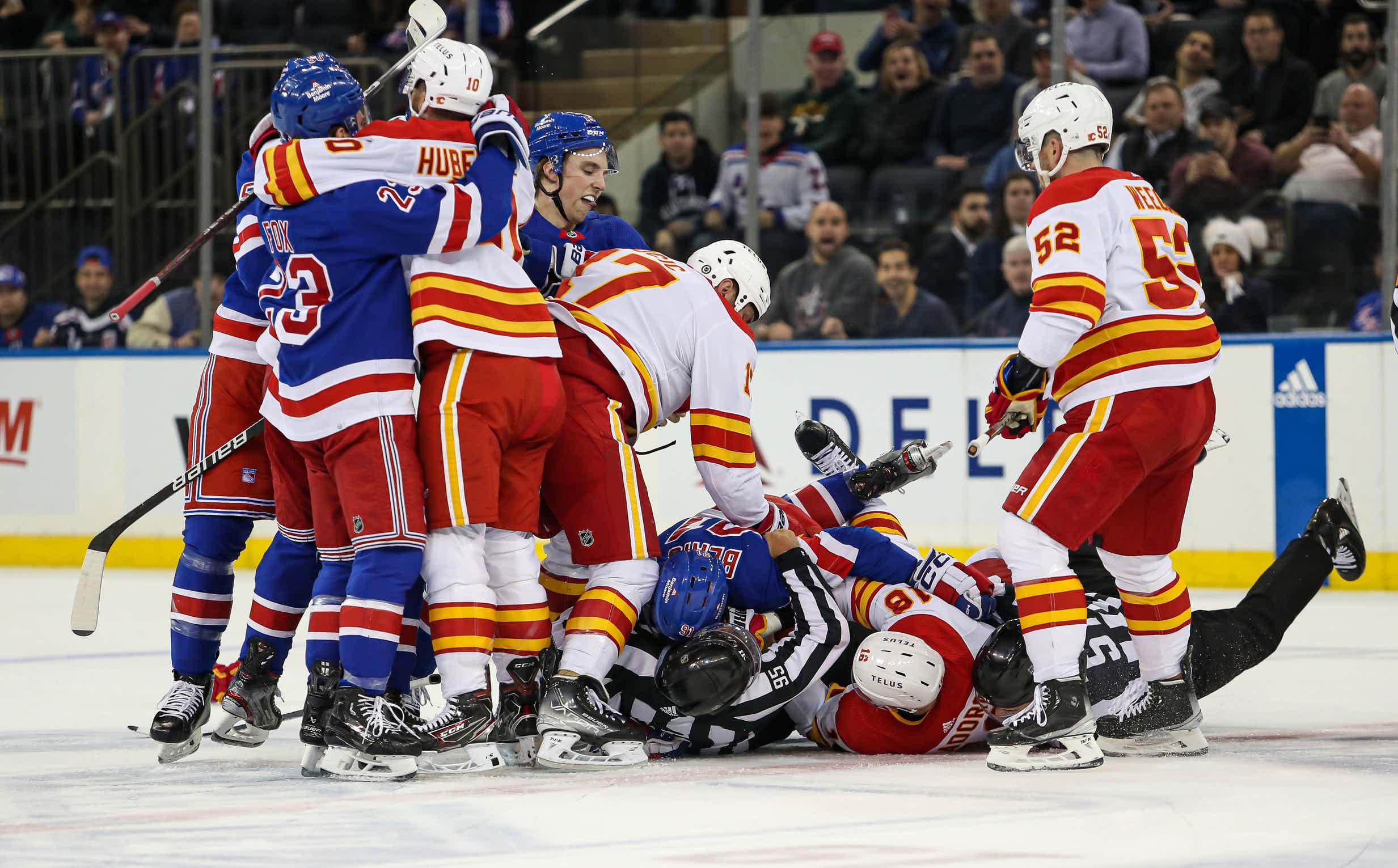