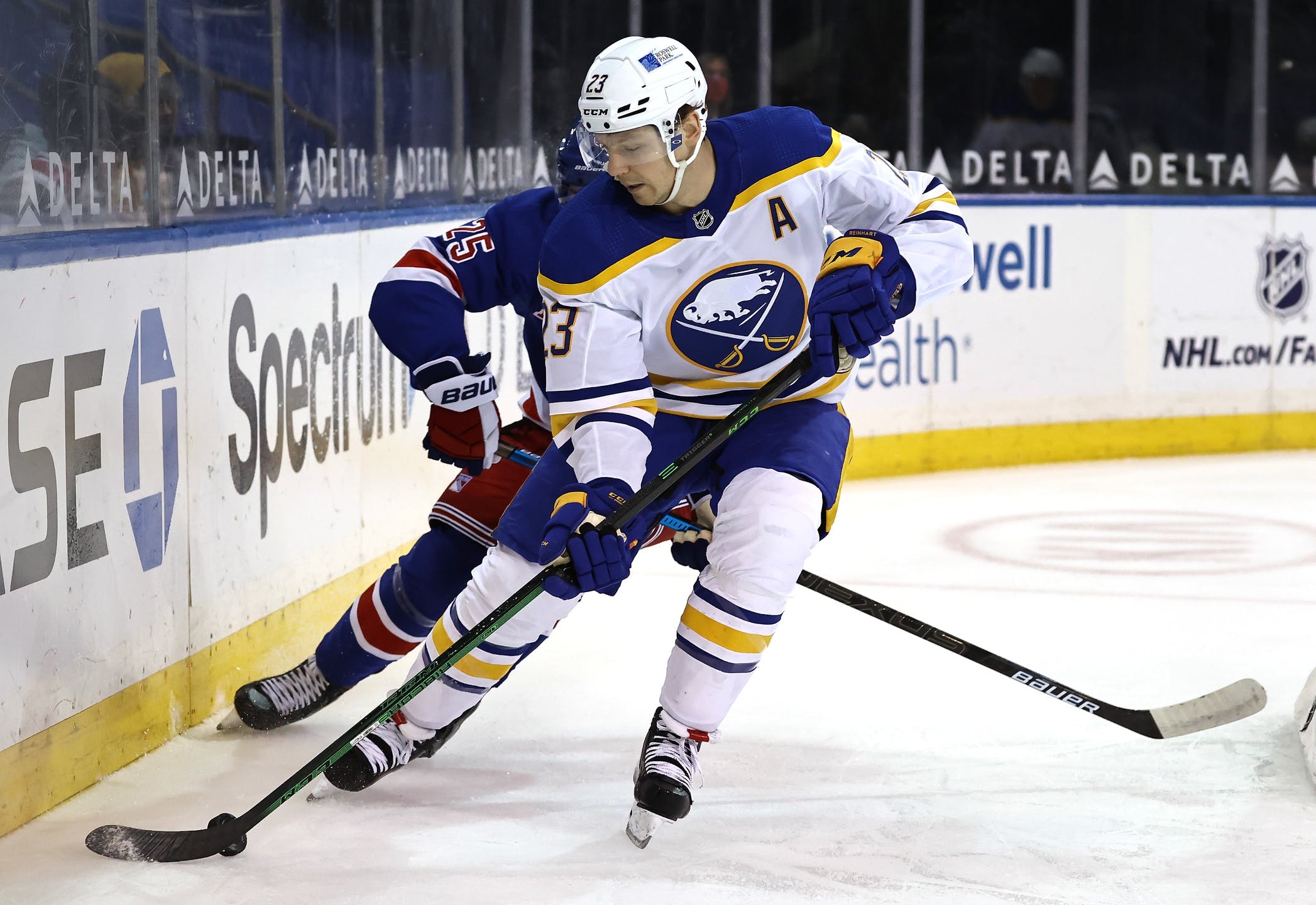 By Mike Gould
1 year ago
Welcome back to FlamesNation’s 2021 Flames Trade Targets series, in which our team of writers takes a look at some of the players around the league either in need of a change of scenery or rumoured to be on the market.
At the 2014 NHL Entry Draft, the Buffalo Sabres selected Sam Reinhart with the second-overall pick.
Two slots later, the Calgary Flames picked a Sam of their own: Sam Bennett, who played parts of seven seasons with the Flames before being traded to the Florida Panthers at the 2021 trade deadline. (The Panthers notably passed on taking the top-ranked Bennett with the first pick in 2014, opting instead to take defenseman Aaron Ekblad).
It seems Reinhart may soon follow in Bennett’s footsteps as a trade chip. Despite putting up largely excellent numbers in his tenure with Buffalo, Reinhart recently expressed his displeasure with the state of the Sabres organization. Buffalo posted a 15-34-7 record in 2020–21 and finished last in the NHL with a meagre 37 points.
Reinhart tied his career-best mark with 25 goals this season, achieving that feat in just 54 games. He tallied nearly twice as many goals and the second-place finisher on his team (Victor Olofsson, who scored 13 goals) and his 40 points led the Sabres.
Buffalo was, in many respects, a complete mess in the 2020–21 season. Jack Eichel missed most of the season due to injury and scored just two goals in the 21 games he did play.
Taylor Hall signed a one-year deal with the Sabres but only mustered two goals and 19 points in 37 games before being dealt to Boston. Eric Staal arrived from Minnesota in the off-season and suddenly fell off a cliff in Buffalo, scoring three goals and 10 points in 32 games. Jeff Skinner (seven goals, 14 points in 53 games) continued to flail despite commanding a $9 million cap hit.
Six goalies played for Buffalo this year and only one put up a save percentage better than .910.
Amidst all this chaos, Sam Reinhart was a shining beacon of light. He lapped the field in terms of Evolving-Hockey’s expected goals above replacement (xGAR) model, finishing 21st in the NHL (and first—by a mile—on the Sabres) with a total of 14.5.
Reinhart is an extremely proficient offensive player both at even strength and on the power play. He ranked fifth in the NHL with 10 goals on the man-advantage in 2020–21, sitting behind only Leon Draisaitl, T.J. Oshie, Joe Pavelski, and Chris Kreider. His 6.6 offensive xGAR at even strength also led the Sabres.
Per Natural Stat Trick, the 2020–21 Sabres averaged 2.04 expected goals for and 2.38 against every 60 minutes spent at even strength; the Sabres nearly came out even with Reinhart on the ice, posting rates of 2.13 xGF/60 at 5v5 and 2.14 xGA/60.
In short: Buffalo went from being near the bottom of the league both in terms of allowing and generating chances without Reinhart to solidly average in both respects whenever he stepped on the ice.
Remember, this is a Sabres team that finished dead-last in the entire NHL and will pick first overall in the 2021 NHL Entry Draft. Basically nothing went right for them, but Reinhart managed to drag them closer to respectability during his shifts.
Now, it looks like he wants out. In mid-May, Buffalo radio host Paul Hamilton reported during a hit on Sportsnet 650 in Vancouver he’s heard Reinhart, a B.C. product with ties to Calgary, wants to move closer to home.
Reinhart was born in Vancouver five years after his dad, Paul, wrapped up his career playing as a defenseman for the Canucks. Paul Reinhart also spent nearly a decade in the Flames’ organization, joining the team during its late Atlanta days before being traded in the summer of 1988.
Max Reinhart, Sam’s older brother, spent five years in the Flames organization and played 23 NHL games with the club. Middle brother Griffin Reinhart also played in Alberta, logging 30 games with the Edmonton Oilers over the course of two seasons.
Sam is the youngest of the three Reinhart kids and has been the most successful. He’s a 6’1″ right-handed forward who plays both centre and the wing and scores a lot of goals. Only 10 NHL players bested Reinhart’s 25 tallies in the 2020–21 season:
Reinhart took 130 shots in just 54 games last season, good enough to rank him 59th among NHL forwards. That rate translates to 197 shots over a full season, which would be a career-best for him.
While he took a step forward in this shortened season, scoring goals has always been the name of Reinhart’s game. He’s tallied 23, 17, 25, 22, 22, and 25 goals in his six full NHL seasons and his total of 134 ranks 46th in the league over that span, roughly in the same ballpark as Phil Kessel, Mark Stone, Gabriel Landeskog, and Nikolaj Ehlers.
Reinhart shot at a 19.2% clip in 2020–21, the 21st-ranked shooting percentage in the league among players with 20 or more games played. It wasn’t that disparate from his usual rate, however: Reinhart has scored with a 13.6% conversion rate during his career and shot 15.3% in 2019–20.
Has Reinhart’s scoring come as a product of Jack Eichel’s play? A little, although they both thrive in each other’s company.
Jack Eichel and Sam Reinhart’s 5v5 expected goal and chance shares with and without each other since 2018–19 (from Natural Stat Trick)
The Sabres generally control the balance of play whenever both their offensive stars have graced the ice at the same time. Reinhart has also decidedly improved the team when he’s been on the ice, although not as much as an isolated Eichel.
Reinhart turns 26 in November and is set to become a restricted free agent—with arbitration rights—on July 28. He is just one season away from unrestricted free agency. A new long-term deal with the Flames (or another team) would eat up just one RFA year before venturing into (typically more expensive) UFA territory.
Evolving-Hockey projects Reinhart’s next contract as being five years long with an average annual value of $6.984 million. Such a deal would take Reinhart until the 2025–26 season; he would be 30 at its expiry.