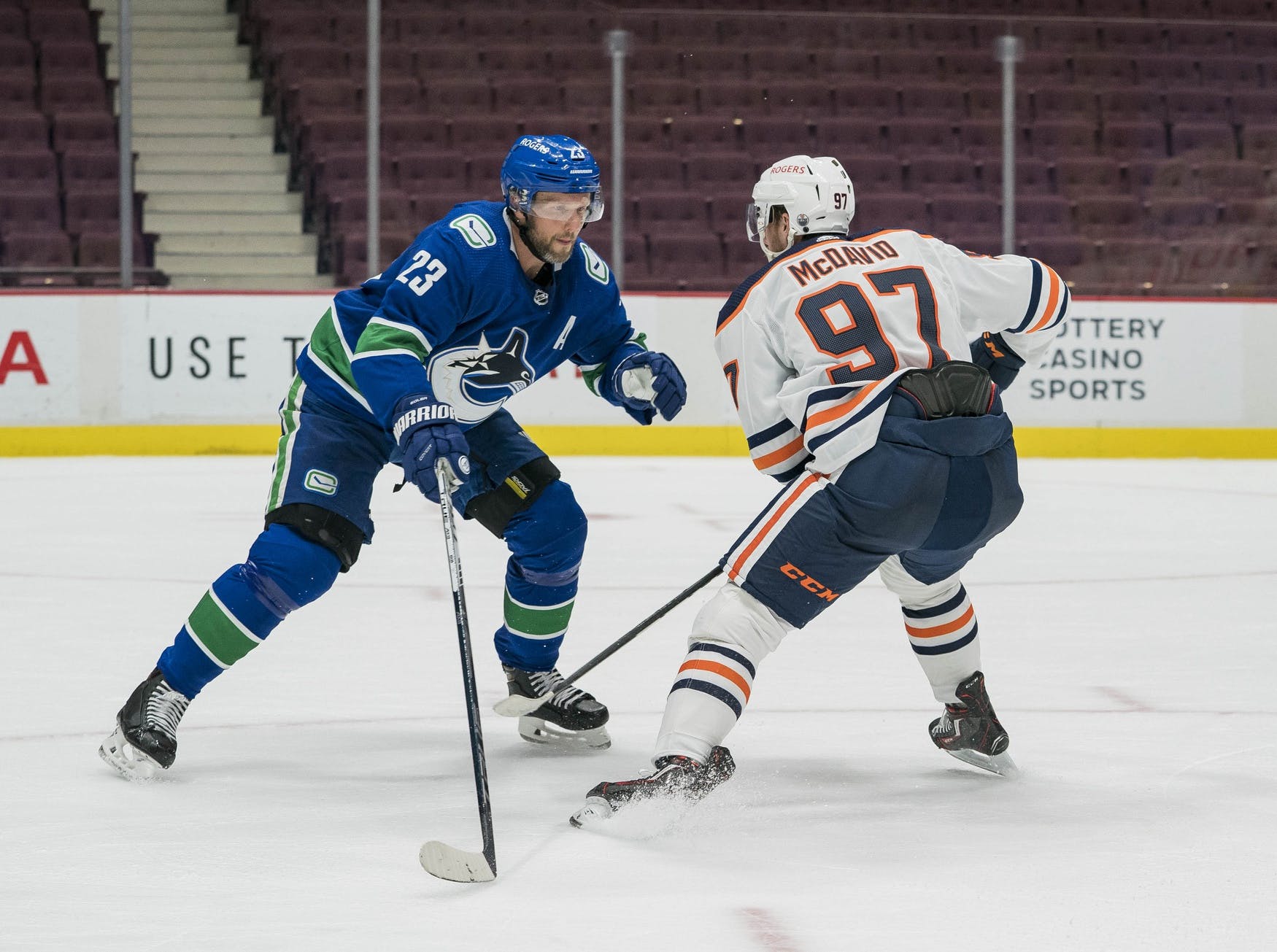 By Mike Gould
1 year ago
Welcome back to FlamesNation’s 2021 Flames UFA Targets series, in which our team of writers assesses some of the key players set to become unrestricted free agents on July 28, 2021.
An era has ended in Calgary. Team captain Mark Giordano is gone.
The Flames’ shopping list for the 2021 offseason now has a new item at the top. With Giordano having been selected in the expansion draft by the Seattle Kraken, the Flames desperately need to add a skilled and experienced left-handed defenceman.
Longtime Vancouver Canucks defenceman Alexander Edler is reportedly set to test the market. He’s a 6’3″ rearguard who has remained effective into his mid-30s and is a player who the Flames have targeted in the past.

Alexander Edler
Born Apr. 21, 1986 (35 years old)
Left-handed defenceman
6’3″, 212 pounds
Previous contract: two years, $6 million AAV
Mark Giordano made his NHL debut with the Flames way back in 2005–06. Alexander Edler first appeared with the Canucks in 2006–07, way back when they also had red on their jerseys. The smooth-skating Swede appeared in 22 games with the team as a rookie, averaging a mere 11:27 per game.
The following year, Edler’s average ice-time nearly doubled to 21:20 over his 75 games with the Canucks. The 2007–08 season kicked off an active streak of 14 consecutive campaigns in which Edler has averaged at least 20 minutes per game.
Edler almost immediately looked like a top-pairing defenceman with the Canucks and he found another level with the team in its President’s Trophy-clinching 2010–11 season. He amassed 9.5 goals above replacement (according to Evolving-Hockey) despite playing just 51 regular-season games; Edler then appeared in all 25 Canucks playoff contests, averaging 24:47 a night en route to Game 7 of the 2011 Stanley Cup Final.
After only missing three games over the 2011–12 and 2012–13 seasons, Edler started experiencing problems with durability. He played in just 442 of the team’s 560 games between 2013–14 and 2019–20, only appearing in more than 70 games once during that span.
According to the late Canucks writer Jason Botchford, the Flames made an ultimately unsuccessful pitch to acquire Edler at the 2019 trade deadline:

…the Calgary Flames did offer the Canucks something that kind of blew them away leading up to the trade deadline. They were surprised to find out Edler had that kind of value.
Multiple teams were in on him too, but Calgary’s offer was thought to be the best, at least one of them which required an Edler extension.

Edler is no longer the same defenceman who earned consideration for the Norris Trophy and end-of-season all-star team in 2011. Nevertheless, when healthy, he remains an effective two-way presence who shines in his own zone. He also currently serves as an alternate captain for the Canucks.

Once known primarily as an offensive defenceman for the Canucks, Edler’s abilities and deployments have progressively shifted over his 15-year career to the point where — after Chris Tanev’s departure — he was arguably Vancouver’s most trusted shutdown rearguard in 2020–21.
After never previously dipping below a 40% rate in his career, Edler only lined up for offensive-zone faceoffs 27.40% of the time at 5-on-5 last season. He responded by posting 2.9 defensive expected goals above replacement at even-strength, the second-highest figure of his career (according to Evolving-Hockey). The Canucks’ opponents struggled to generate offence whenever they faced Edler’s unit.
A selection of Alexander Edler’s play-driving figures in the NHL (data from Natural Stat Trick, all 5v5)
Note: In the second-last column, a positive number indicates the Canucks had better offensive results with Edler on the ice than without him. In the last column on the right, a negative number indicates the Canucks allowed fewer chances with Edler on the ice than without him.
For a long time, Edler quarterbacked the Canucks’ top power-play unit and averaged at least 3:00 per game with the man-advantage. With Quinn Hughes, Nate Schmidt, and Tyler Myers now in the fold, Edler saw his PP time significantly reduced.
Edler scored eight points at 5-on-5 in 2020–21, hardly a far cry from his totals of 12, nine, 13, 10, 15, 14 and 12 between the 2012–13 and 2018–19 seasons (in 2019–20, he exploded for a career-high 21 — which already looks like an outlier — in just 59 games).
Between 2007–08 and 2019–20, Edler scored 177 points (44.5% of his totals over that span) on the power play. In 2020–21, Edler was almost completely removed from Vancouver’s man-advantage units and, accordingly, saw his raw point totals drop. Perhaps coincidentally, the Canucks’ power-play percentage fell from 24.15% (4th in the NHL) in 2019–20 to 17.42% (25th) in 2020–21.
Edler is an experienced and competent two-way defenceman who can adapt to a variety of different roles. Analytics website Evolving-Hockey projects his next UFA contract will most likely carry a $3.866 million AAV over a three-year term.
If the Flames are looking to flesh out their top-four on the back-end with an effective veteran presence, Edler could rank among the top targets on their list.