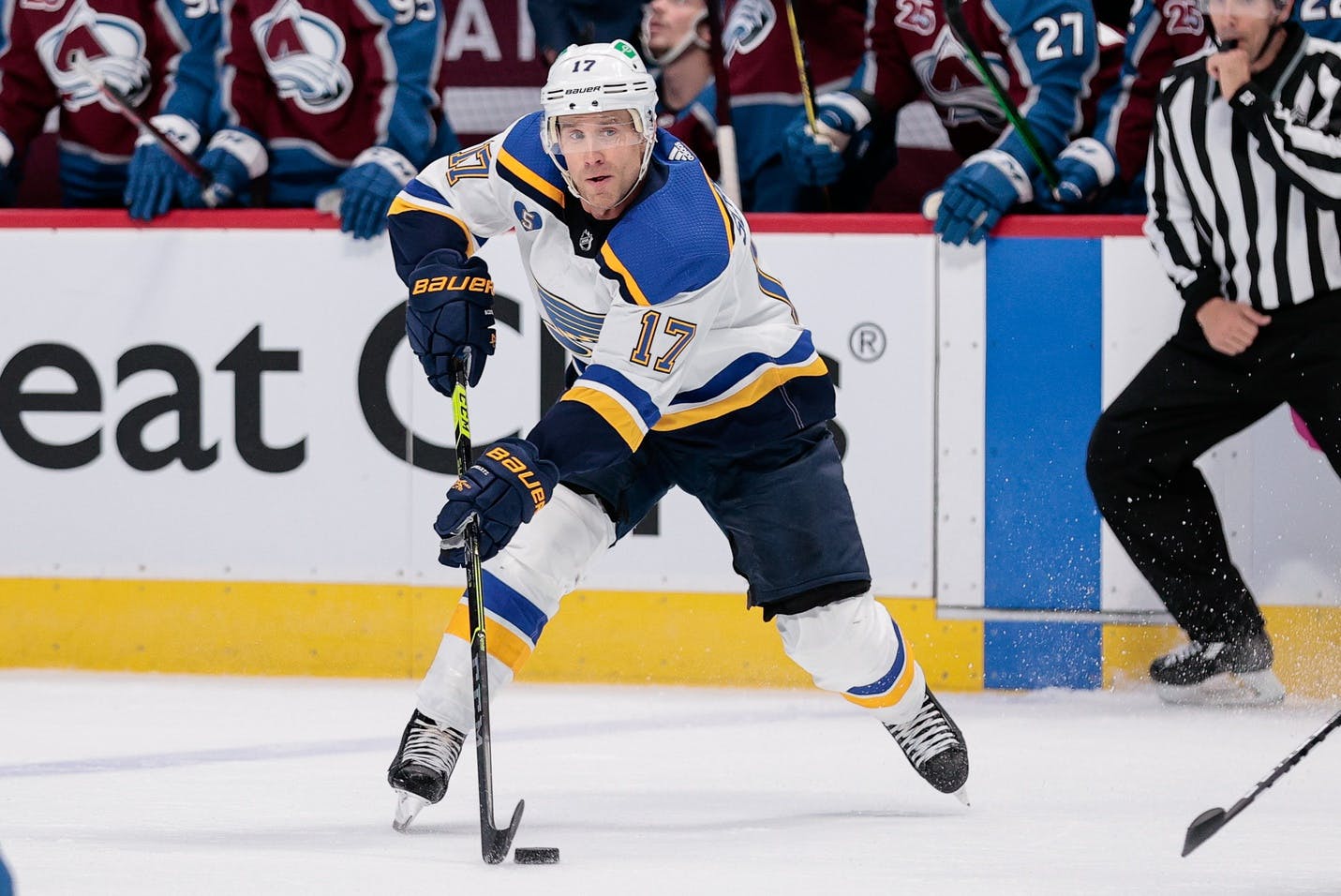 By Mike Gould
1 year ago
Welcome back to FlamesNation’s 2021 Flames UFA Targets series, in which our team of writers assesses some of the key players set to become unrestricted free agents on July 28, 2021.
Jaden Schwartz has spent his entire NHL career to this point with the St. Louis Blues, leading the team in playoff scoring in its run to the 2019 Stanley Cup.
The five-time 50-point scorer has a long history of representing Canada on the international stage, having served as captain of the country’s 2012 World Junior squad. He remains a well-rounded top-six forward who can play roles throughout his team’s lineup.

Jaden Schwartz
Born Jun. 25, 1992 (29 years old)
Left-handed centre/left wing
5’10”, 190 pounds
Previous contract: five years, $5.35 million AAV
The Blues selected Schwartz 14th overall in the 2010 NHL Entry Draft. The Wilcox, Saskatchewan product subsequently played two seasons at Colorado College before turning professional in the Blues organization at the end of the 2011–12 season.
Prior to signing his first NHL contract, Schwartz participated in two U-20 World Junior tournaments with Team Canada. He won a silver medal at the 2011 tournament before capturing bronze as captain in 2012, scoring five points in six games in the latter competition.
Schwartz debuted as a full-time NHLer in the lockout-shortened 2012–13 season, scoring 13 points in 45 games. From there, he immediately became a top-six forward, scoring 255 points (104 goals, 151 assists) in 328 games between the 2013–14 and 2017–18 seasons.
In 2018–19, for the first time in his career, Schwartz struggled to produce. After scoring 24 goals and 59 points in just 62 games the season prior, Schwartz managed only 11 goals and 36 points in 69 games during St. Louis’ tumultuous 2018–19 campaign.
According to Evolving-Hockey, Schwartz contributed only 0.2 expected goals above replacement in the 2018–19 regular season; his play was worth just $0.9 million against his $5.35 million contract.
Then, the playoffs started. Schwartz exploded for 12 goals (including two hat tricks) and 20 points in just 26 postseason games as the Blues captured their first Stanley Cup in franchise history. Vladimir Tarasenko (11) was the only other Blue to surpass eight goals in the playoffs.
Schwartz returned to his typical form in 2019–20 with a 22-goal, 57-point season and remained strong into 2020–21. Although his raw numbers dropped — he posted eight goals and 21 points in 40 games and missed over a month with a lower-body injury — he continued driving offensive play and posted 5.2 expected goals above replacement.

The 2020–21 St. Louis Blues were not a great team. They finished with the NHL’s 26th-best 5-on-5 expected goals percentage and the 24th-best Corsi percentage while averaging just 1.91 expected goals for-per-60 (30th in the NHL).
Nevertheless, Schwartz elevated the Blues during his shifts into a far better offensive team. The Blues averaged 2.22 expected goals-per-60 with Schwartz on the ice in 2020–21; for context, only eight NHL teams generated expected goals at a higher rate last season.
A selection of Jaden Schwartz’s play-driving figures with the St. Louis Blues (data from Natural Stat Trick, all 5v5)
Note: In the second-last column, a positive number indicates Schwartz’s team had better offensive results with him on the ice than without him. In the last column on the right, a negative number indicates Schwartz’s team allowed fewer chances with him on the ice than without him.
More of Jaden Schwartz’s play-driving figures with the St. Louis Blues (data from Hockey-Reference and NST)
Schwartz ranked fifth on the 2020–21 Blues with 5.2 offensive expected goals above replacement (xGAR). He placed sixth on the team — and second among forwards — with 1.1 defensive xGAR.
Only two Blues players mustered more than 40 points in 2020–21. Schwartz ranked sixth on last year’s Blues with 1.62 points-per-60 at 5-on-5, down slightly from his production in the previous two seasons.
One number about Schwartz to keep in mind: 102. That’s how many games he’s missed to injury over the last six seasons, including a 49-game absence in 2015–16.
Evolving-Hockey currently projects Schwartz’s next deal as being worth an average of $4.757 million over three seasons. For a 29-year-old scoring forward who can play centre and on the wing, a contract with those terms would be a bargain — particularly when considering Zach Hyman’s rumoured asking price.