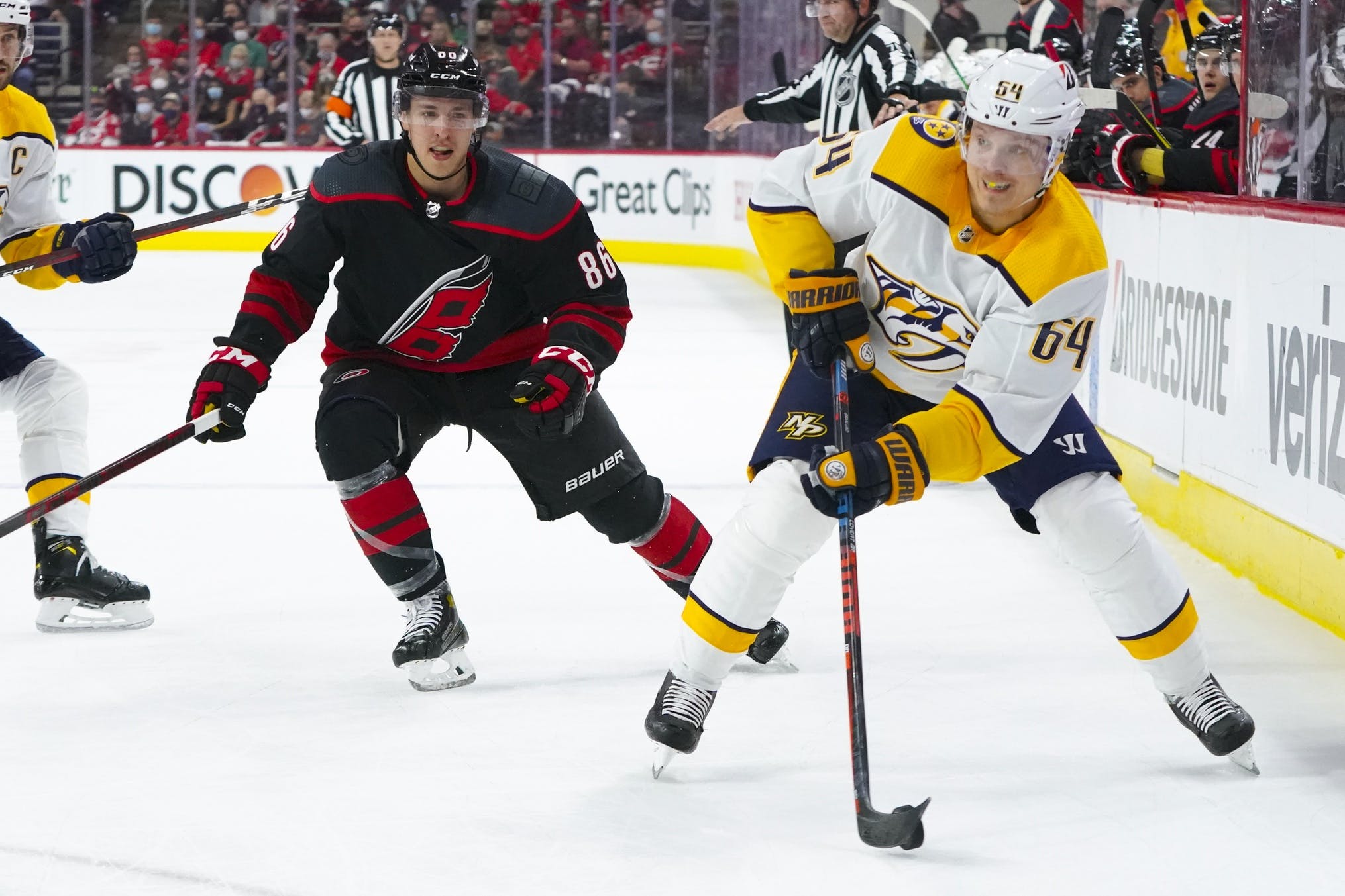 By Mike Gould
1 year ago
Welcome back to FlamesNation’s 2021 Flames UFA Targets series, in which our team of writers assesses some of the key players set to become unrestricted free agents on July 28, 2021.
Once considered one of the NHL’s premier scoring forwards, Mikael Granlund has experienced a change in fortunes since being traded to the Nashville Predators in 2019.
After failing to impress on a one-year deal with the Predators in 2020–21, the versatile Granlund will hit the market in two weeks’ time and could be an appealing buy-low target for a retooling Flames team.

Mikael Granlund
Born Feb. 26, 1992 (29 years old)
Left-handed centre
5’10”, 185 pounds
Previous contract: one year, $3.75 million AAV
Minnesota selected Granlund with the ninth pick of the 2010 NHL Entry Draft. He made the jump to North America in 2012 following three outstanding seasons with HIFK in the Finnish Liiga.
After scoring two goals and eight points in 27 games as a rookie, Granlund emerged as a top-six forward with the playoff-bound Wild in 2013–14. He averaged 17:19 in 63 games and tallied 41 points (8 goals, 33 assists); in 13 playoff games, he scored four goals and seven points.
Granlund registered seasons of 39 and 44 points in 2014–15 and 2015–16 before taking another big step forward in 2016–17. He finished in a tie with Jamie Benn, Auston Matthews, and Alexander Ovechkin for 20th in the NHL in scoring with 69 points in 81 games; Granlund also earned Selke votes and finished ninth in end-of-season all-star balloting at the right-wing position.
In 2017–18, Granlund led all Wild forwards in average ice-time (18:47) and finished second on the team with 67 points. He continued scoring at a similar pace into 2018–19, amassing 15 goals and 49 points in 63 games with Minnesota before Paul Fenton — in the midst of his extremely brief and, er, wild tenure as general manager — shipped him off to Nashville in exchange for Kevin Fiala.
While Fiala has since emerged as a first-line scoring forward in Minnesota, Granlund’s production took a nosedive in the Music City. He finished the 2018–19 campaign with just one goal and five points in 15 games with Nashville, following it up with 30 goals and 57 points over 114 games in 2019–20 and 2020–21. (That’s a 41-point pace over an 82-game schedule).
After a disappointing first full season in Nashville, Granlund decided to re-sign with the Preds on a one-year contract worth $3.75 million. Despite averaging a career-high 19:28 per game in 2020–21, Granlund posted just 13 goals and 27 points in 51 games to finish fourth on the team in scoring.

Yes, you heard that right: Granlund finished fourth on the 2020–21 Predators in scoring despite barely surpassing a 0.5 point-per-game pace. Last season’s Nashville team was one of the most anemic offensive clubs in the league, averaging 2.31 5-on-5 goals-per-60 (20th in the NHL), 2.14 5-on-5 expected goals-per-60 (also 20th), 6.18 power play goals-per-60 (23rd), and 5.61 power play expected goals-per-60 (25th).
Team captain Roman Josi led last season’s Predators with just 33 points in 48 games. Granlund may have posted lower raw individual point totals in 2020–21 than in past seasons but it’s important to note the offense-dry nature of his surroundings.
That said, it’s concerning how Granlund’s individual shot output decreased significantly between the 2019–20 and 2020–21 seasons. After taking 130 shots in 63 games during the 2019–20 campaign, Granlund only managed 74 in 51 contests the following year despite averaging an additional 1:40 per game.
A selection of Mikael Granlund’s play-driving figures with the Wild and Predators (data from Natural Stat Trick, all 5v5)
Note: In the second-last column, a positive number indicates Granlund’s team had better offensive results with him on the ice than without him. In the last column on the right, a negative number indicates Granlund’s team allowed fewer chances with him on the ice than without him.
More of Mikael Granlund’s play-driving figures with the Wild and Predators (data from Hockey-Reference and NST)
According to Evolving-Hockey, Granlund has contributed a meagre total of 1.2 goals above replacement in his 130 games with Nashville. For comparison’s sake, Granlund posted 6.3 goals above replacement in his 63 games with the Wild in 2018–19; prior to that, his play was worth 18.8 goals above replacement in 2016–17 and 14.3 in 2017–18.
Evolving-Hockey valued Granlund’s play with Minnesota between 2016–17 and 2018–19 as being worth a total of $27.0 million (against earnings of $14.6 million). Granlund earned a total of $9.5 million in his two full seasons with the Predators but provided the team with just $1.3 million of value over that span.
Could Granlund rebound? Maybe. Despite his poor production, Evolving-Hockey still assessed his play in 2019–20 as being worth 7.8 expected goals above replacement (and 2.8 in 2020–21).
Specifically, his offensive play-driving has remained strong. Granlund managed 2.6 offensive goals above replacement and 5.5 expected offensive goals above replacement in 2020–21, with the latter mark comparing favourably to some of his best years in Minnesota. His overall GAR and xGAR figures were dragged down by career-worst defensive results (-3.4 defensive GAR and -4.0 defensive xGAR).
Evolving-Hockey estimates Granlund’s next contract on the UFA market will come in with an AAV of $5.036 million for three years. Given his struggles on his most recent “show-me” deal, it’s easy to envision a future where the Finn comes cheap again in a bid to rebuild his value in a new market.
Granlund clearly possesses a ton of skill and could be an appealing target to a team looking for a versatile reclamation project. He’s remained a solid offensive play-driver even in his time with the Predators; in a different system, with a bit of sheltering and a bounceback in his own end, he might be able to succeed once again in a top-six role.