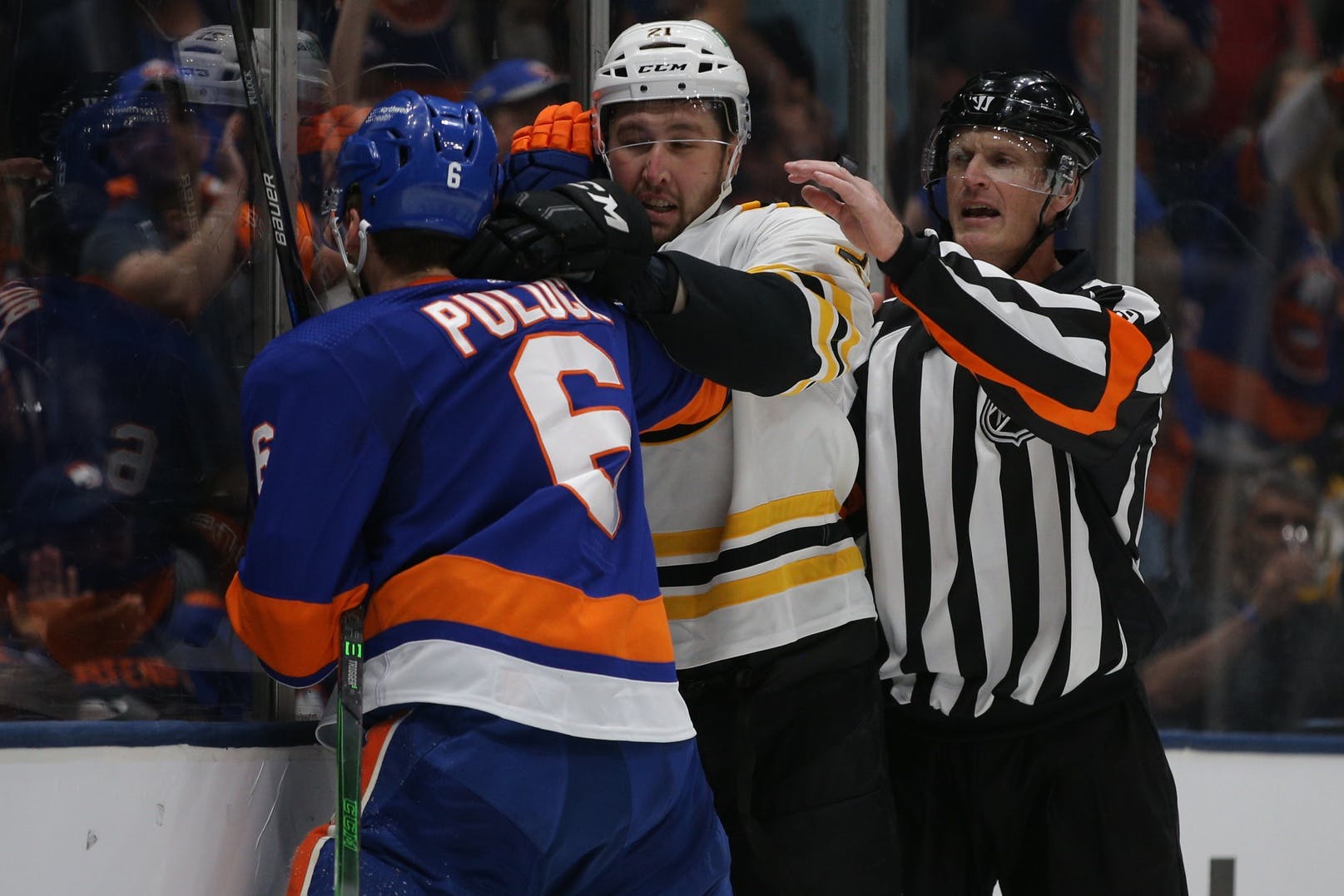 By Mike Gould
1 year ago
The RFA qualifying offer deadline has come and gone. All 32 NHL teams have now finalized their lists of players to keep and cut loose.
The Calgary Flames have elected to qualify 12 of their 14 restricted free agents. Calgary retains the RFA rights to Dillon Dube, Matthew Phillips, Glenn Gawdin, Juuso Valimaki, Connor Mackey, Luke Philp, Tyler Parsons, Colton Poolman, Justin Kirkland, Carl-Johan Lerby, Alexander Yelesin, and Oliver Kylington; Dominik Simon and Artyom Zagidulin will become UFAs on July 28.
While the Flames’ list of qualified players features very few surprises, a selection of teams around the league elected against tendering offers to some of their most intriguing RFAs (presumably for salary cap or arbitration reasons).
Here are some of yesterday’s most notable additions to the 2021 class of unrestricted free agents.
Before we get started: Mark Jankowski is not on this list despite being set to hit the market tomorrow. The Pittsburgh Penguins elected not to qualify the 26-year-old centre after he scored 11 points (four goals, seven assists) in 45 games during the regular season.
Jankowski was the Flames’ first-round draft pick in 2012. He scored 17 goals as a rookie with Calgary in 2017–18 before setting a career-high with 32 points in 79 games with the Pacific Division champion Flames in 2018–19.
Then, after being rumoured as part of a potential deal with the Toronto Maple Leafs in the summer of 2019, Jankowski hit a wall in 2019–20. He managed just five goals and seven points in 52 games and was not tendered a qualifying offer by the Flames following the season.
Jankowski is an unremarkable player who provides most of his value in the defensive zone. He provided the Penguins with 1.5 defense expected goals above replacement (xGAR) in 2020–21 (ranking ninth on the team, according to Evolving-Hockey); he only managed -2.8 offensive xGAR, the fewest on the Penguins and the 30th-worst mark in the NHL.
There’s a decent chance Jankowski will wind up somewhere on a league-minimum deal. He almost certainly won’t return to Calgary.

Ritchie is a massive 25-year-old winger who emerged as a productive middle-six forward with the Boston Bruins last season. He tallied a career-high 15 goals and added 11 assists in 56 games, good enough to rank seventh on the team in scoring.
The cap-strapped Bruins clearly had little interest in risking an arbitration case by paying Ritchie his $2 million qualifying offer. He’s a good player — according to Evolving-Hockey, he ranked sixth on the Bruins with 8.0 expected goals above replacement in 2020–21 — but Boston needed to ensure it could fit Taylor Hall’s new deal and two more goalie contracts under the salary cap.
Ritchie stands 6’2″ and weighs 230 pounds. His brother, Brett, already plays for the Flames. He brings offensive ability and physicality, two attributes the Flames surely covet. It’s hard to imagine Ritchie not being a Sutter favourite and, unlike his brother, he has the skills to back it up.

Suter is another player who had a very good arbitration case before his team elected not to qualify him. Still, it’s a little strange to see Chicago electing not to retain the exclusive negotiating rights for a 25-year-old centre coming off a rookie season where he scored 14 goals and 27 points in 55 games.
The Swiss pivot has 180 pounds on his 5’11” frame. Here’s the full list of Chicago players who posted more expected goals above replacement (per Evolving-Hockey) than Suter in 2020–21:
Suter is a productive left-handed centre with strong underlying numbers. He would be a very appealing target to strengthen Calgary’s top-nine, particularly if the Flames pull the trigger on a Sean Monahan trade this summer. Of course, all bets are off if Suter becomes the subject of a bidding war around the league.

Poor Ondrej Kase. The 25-year-old winger had a rough start to his tenure in Boston after being acquired at the 2020 trade deadline, going goalless in 17 games with the team over the remainder of the regular season and the playoffs.
Kase then suffered an injury in his second game of the 2020–21 season. He missed nearly five months of action before returning for a single game in May; after taking just nine shifts against the New York Islanders, his season officially ended.
Injuries have always been Kase’s most formidable opponent during his relatively productive NHL career. He scored 31 goals and 58 points in 96 games with the Anaheim Ducks between the 2017–18 and 2018–19 seasons; however, he also missed 68 of the Ducks’ games over that span.
Kase is a 6’0″, 190-pound right-handed winger with a 20-goal season under his belt from his time with the Ducks. If he’s healthy now, the Flames might be wise to take a gamble on him returning to his past calibre.

OK, Bunting technically doesn’t fit in with the rest of this group. Due to his relative lack of NHL experience, he lost his RFA status early and instead falls into the “Group 6 UFA” category. That said, he’s still just as young as everybody else on this list and he also couldn’t come to an agreement on a new contract with his previous team. We’ll make an exception for him.
Bunting is a very unique player. He’s a 25-year-old left wing who was drafted by the Arizona Coyotes way back in 2014 but only found his niche as an NHLer in 2020–21. The ‘Yotes recalled Bunting during the season to replace a struggling Drake Caggiula, who they ultimately waived a week later.
Despite appearing in only 21 games for the Coyotes in 2020–21, Bunting amassed 13 points and tied for sixth on the team with 10 goals. He scored just two fewer goals than fellow rookies Tim Stützle and Alexis Lafrenière despite playing less than half as many games.
Bunting converted at a ridiculous 26.3% rate with Arizona last season. While he won’t keep scoring on more than a quarter of his shots, Bunting can provide value in other ways. He’s a 5’11”, 197-pound buzzsaw who plays hard on the forecheck and impressed Team Canada coach Gerard Gallant with his debut international performance at the 2021 IIHF World Championship.

Kahun is a versatile 26-year-old forward who has been relatively productive throughout his career.
With 34 goals and 83 points in 186 games spent with Chicago, Pittsburgh, Buffalo, and Edmonton, Kahun has scored at a rate of 15 goals and 37 points per 82 games over his three NHL seasons.
Kahun has provided a total of 14.8 offensive expected goals above replacement in his career (according to Evolving-Hockey), most recently ranking sixth on the Oilers with 4.0 offensive xGAR in just 48 games. However, Kahun’s -3.1 defensive xGAR in 2020–21 ranked ahead of only Tyson Barrie, Darnell Nurse, and Leon Draisaitl on the Oilers’ leaderboard.
As a secondary offensive option, Kahun might be worth a look. He’s a 5’11”, 174-pound lefty who finished sixth on the Oilers with nine goals last season. He struggled defensively while playing primarily with Draisaitl — another weak defender — but held up fine in his own end during his stints in Chicago and Pittsburgh.

The Ducks certainly chose not to qualify Heinen out of concerns about his potential arbitration case and his expensive minimum offer (north of $2.75 million). Heinen, 26, is another left-handed forward who can play all three forward positions.
In 2017–18, Heinen exploded onto the scene in Boston as a rookie and scored 47 points (16 goals, 31 assists) in 77 games. He followed it up with 34 points in 2018–19 before managing just 22 in 58 games with Boston in 2019–20.
At the 2020 trade deadline, the Bruins and Ducks swapped Nick Ritchie and Danton Heinen. Neither player received a qualifying offer on Monday. Heinen managed 10 goals and 18 points in 52 games with the Ducks over the past two seasons.
Heinen stands 6’1″ and weighs 188 pounds. He can kill penalties and still has some offensive upside, even if he’s unlikely to replicate his production from the late 2010s. Evolving-Hockey appraised Heinen’s play as being worth $1.1 million in 2020–21; last year, he counted for $2.8 million against Anaheim’s salary cap.

Dal Colle is a burly winger who has struggled, to this point, to meet the expectations adjacent to his draft position. The New York Islanders selected Dal Colle with the fifth overall selection in the 2014 NHL Entry Draft; in 111 games over parts of four seasons on Long Island, Dal Colle has amassed just eight goals and 21 points.
What makes Dal Colle potentially appealing? First of all: his size. Dal Colle (6’3″, 200 pounds) has the prototypical build of a bottom-six forward on a Darryl Sutter team. He uses his size, too, having collected 113 hits in 79 games over his last two seasons.
Dal Colle has also been a useful defensive forward during his tenure with the Islanders. He ranked fifth on the team with 3.1 defensive xGAR in the 2018–19 season (according to Evolving-Hockey) and placed second among all Islanders skaters with 0.566 defensive xGAR per 60 in 2020–21.
While he only scored four points in 26 games last season, Dal Colle could benefit from a change of scenery and different coaching. As a defensive role player creating space for younger linemates on a bottom-six unit, Dal Colle could feasibly provide the Flames with legitimate value.

Donato has been a reasonably productive forward for most of his career, having scored 35 goals and 77 points in 180 games with Boston, Minnesota, and San Jose. The 6’0″, 193-pound centre/wing managed 20 points (six goals, 14 assists) in 50 games with the Sharks in 2020–21.
While he is undeniably effective on the power play, Donato struggled to drive play at 5-on-5 at either end of the ice in his brief tenure with the Sharks. At even-strength, he mustered -2.6 offensive xGAR and -2.1 defensive xGAR (according to Evolving-Hockey). Both figures ranked in the bottom three on the 2020–21 Sharks.
Donato posted relative results in the negatives for Corsi, goals, expected goals, and high-danger chances while on the ice for the Sharks at 5-on-5. He performed poorly despite taking 52.40% of his faceoffs in the offensive zone (the second-highest mark on the team).
While Donato has been a positively impactful player in the past (particularly with the Wild), he took a major step backwards with the Sharks in 2020–21. He could provide value in 2021–22 on a cheap “prove it” deal, assuming he replicates (or betters) what he showed in Minnesota.
Others to watch: Evgeny Svechnikov (Detroit); Dryden Hunt (Arizona); Jujhar Khaira (Edmonton); Lucas Wallmark (Florida); Christian Djoos (Detroit); Jayce Hawryluk (Vancouver); Nic Petan (Toronto); Michael Amadio (Ottawa).
Uncategorized
Recent articles from Mike Gould