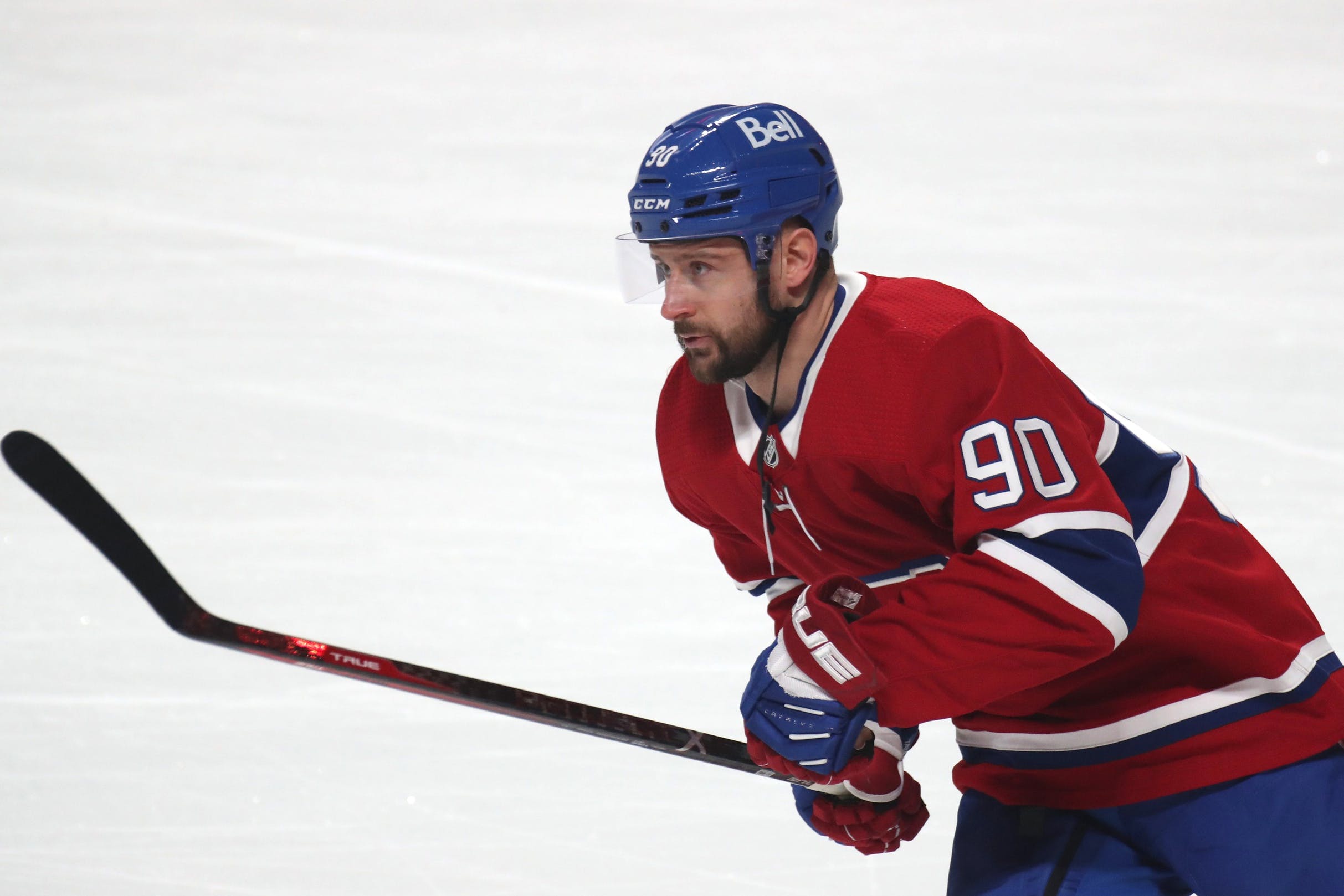 By Mike Gould
1 year ago
Welcome to FlamesNation’s 2021 Flames UFA Targets series, in which our team of writers will assess some of the key players set to become unrestricted free agents on July 28, 2021.
The Montreal Canadiens acquired Tomas Tatar back in 2018 as part of the deal which sent former Habs captain Max Pacioretty to the Vegas Golden Knights.
Three years later, Tatar is a pending UFA whose days with the Canadiens appear to be over. Despite leading the Habs in scoring in the 2019–20 season and posting solid numbers this past year, Tatar seldom played during Montreal’s run to the 2021 Stanley Cup Final.
Even if Tatar’s market value has taken a hit, he remains an excellent play-driver who possibly could be obtained at a bargain price.

Tomas Tatar
Born Dec. 1, 1990 (30 years old)
Left-handed winger
5’10”, 173 pounds
Previous contract: four years, $5.3 million AAV
After being drafted by the Detroit Red Wings in the second round of the 2009 NHL Entry Draft, Tatar made his NHL debut with the Wings in 2010–11 and became a full-time NHL player in 2013–14. He scored 19 goals and 39 points in 73 games as a rookie and helped Detroit make the playoffs for the 23rd consecutive year.
Tatar followed his debut performance with seasons of 29, 21, and 25 goals before being traded to the brand-new Vegas Golden Knights franchise in 2017–18. Detroit received first-, second-, and third-round draft picks as compensation for the loss of Tatar, who was in the first season of a four-year contract (worth $5.3 million annually) at the time of the deal.
Vegas added Tatar to boost its offensive attack in anticipation of a possible long playoff run. While the Knights eventually did make it to the Stanley Cup Final, losing in five games to the Washington Capitals, Tatar meshed poorly in his new environment and scored just two points in eight playoff games. He sat out of 12 postseason contests as a healthy scratch.
Having played just one partial season with Vegas, Tatar quickly found himself on the move once more. In September 2018, the Knights dealt Tatar, Nick Suzuki, and a 2019 second-rounder to Montreal in exchange for Max Pacioretty.
While Pacioretty has been a worthwhile addition to a formidable Knights forward group, it’s hard to deny the value Montreal added in the trade. Suzuki is just 21 and already has 82 points in just 127 NHL games; Montreal ultimately moved the pick to Los Angeles in a deal that saw them move down 14 spots (from 50 to 64) and add a high fifth-rounder.
To even acquire only Suzuki and a couple of picks in exchange for Pacioretty would have been a large-scale coup for the Canadiens. On top of that, the Habs added a quality reclamation project in Tatar who immediately proceeded to put up some of the best numbers of his career.
Tatar scored 25 goals and 58 points in 80 games with the Habs in 2018–19. He fared even better in 2019–20, amassing 61 points (22 goals, 39 helpers) in just 68 contests. Montreal subsequently advanced to the first round of the 2020 playoffs; Tatar scored two goals in 10 postseason games.
The Canadiens fired head coach Claude Julien during the 2020–21 season, appointing Dominique Ducharme to replace him. Amidst all the turmoil behind the Habs’ bench, Tatar saw his average ice-time decrease from 16:18 in 2019–20 to 14:59. His production also dipped: Tatar scored 30 points (10 goals, 20 assists) in 50 games.
Montreal barely qualified for the 2021 playoffs, narrowly edging out the Calgary Flames for fourth place in the Canadian Division. They proceeded to shock the hockey world by making it all the way to the Stanley Cup Final, defeating the Toronto Maple Leafs, Winnipeg Jets, and Vegas Golden Knights before falling in five games to the Tampa Bay Lightning.
Tatar participated in just five of Montreal’s 22 playoff contests, tallying a lone assist. However, the Canadiens thoroughly dominated their opponents during his shifts, controlling 55.85% of the expected goals and 61.32% of the shot attempts. Tatar’s continued absence from the Canadiens’ lineup — particularly when less effective players like Paul Byron and Corey Perry appeared in every playoff game — made little sense, especially as Montreal struggled to score against the Bolts in the final.

Tatar’s single best attribute might be his shot, which he deploys often and with pinpoint accuracy. Prior to the shortened 2020–21 season, Tatar had recorded at least 20 goals in six consecutive seasons.
In his three years with the Canadiens, Tatar averaged 7.72 shots/60 at even strength. Among the 481 forwards with at least 500 minutes played over the past three seasons, Tatar’s shots/60 figure tied that of Matthew Tkachuk for 126th in the NHL.
Tatar wasn’t the only Canadien taking lots of shots during his shifts. According to Natural Stat Trick, he posted the second-best on-ice Corsi percentage and the single best expected goals percentage in the entire NHL over the last three seasons.
With Tatar on the ice at even strength, Montreal controlled 59.43% of the shot attempts and 59.81% of the expected goals. The Habs also outscored their opposition by a stunning 142-100 margin during Tatar’s shifts, giving him the 34th-best goals-for percentage in the NHL over that span.
Tatar massively helped Montreal to pepper its opposition with plenty of dangerous shots. The Habs controlled 60.93% of all high-danger chances during his shifts in the last three seasons, the second-highest mark of any forward in the NHL. With Tatar on the ice, Montreal amassed 641 high-danger opportunities and conceded just 411. They scored 95 goals in high-danger areas and allowed only 57.
Between 2018 and 2021, Tatar spent the majority of his time playing alongside Canadiens winger Brendan Gallagher. While both players benefited from the partnership, Gallagher’s game suffered to a greater extent whenever the pairing split.
Tomas Tatar and Brendan Gallagher’s results playing with and without each other between the 2018 and 2021 seasons (all data 5-on-5, from Natural Stat Trick)
Tatar was one of the NHL’s most efficient scorers over the past three seasons. He averaged 2.49 points-per-60 at even strength, placing him 21st in the entire league during that span.
Here’s a list of the 21 players who averaged the most points per 60 minutes of ice-time between the 2018–19 and 2020–21 seasons:
Once again: Montreal saw fit to make Tatar a healthy scratch in 77.2% of their playoff games this season. Mind-boggling stuff.
According to Evolving-Hockey, Tatar provided the Canadiens with 38.2 goals above replacement in his three seasons with the team. Evolving-Hockey’s “standings points above replacement” model assessed Tatar as having been worth a total of $19.2 million between 2018–19 and 2020–21 (he actually cost $15.9 million against the salary cap in those three seasons).
The same site estimates Tatar will most likely command a three-year deal in unrestricted free agency worth $5.236 million per season. With Derek Ryan’s contract coming off the books and Michael Stone’s buyout set to expire, the Flames — pending expansion — should have approximately $14.5 million of cap space this offseason.
While Calgary has plenty of left-shooting wingers who are small in stature, Tatar has shown to be able to drive play and score at an excellent level. If Tatar’s absence from the 2021 playoffs lowers his value as a UFA, the Flames might be able to slide in and add a tremendous player for a discount price.
Tatar is a smart, skilled player who can really shoot the puck. The Flames certainly need more of those.