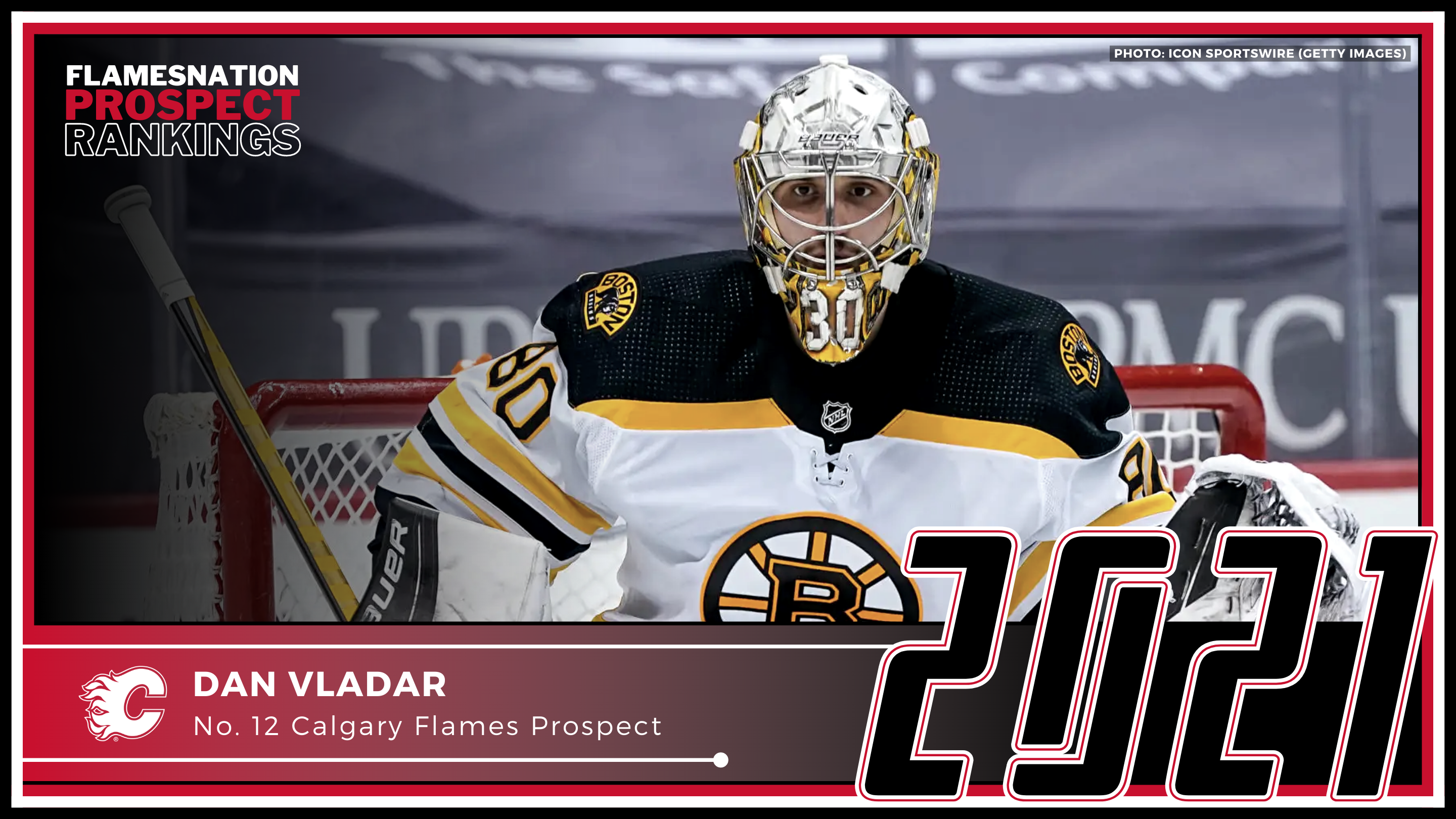 By Prajeya Parmar
1 year ago
Coming in at number 12 in the 2021 edition of the Calgary Flames prospect rankings is recent addition, Daniel “Darth Vader” Vladař. Prior to being traded to the Flames for a third-round pick, Vladař wrapped up a highly respectable 2020-21 season, which saw him tend the twine in three different leagues.
More on the Calgary Flames’ newest backup goalie below.
Daniel Vladař
Left-catching goalie
Born Aug. 20, 1997 (age 24) in Prague, Czech Republic
6’5”, 194 pounds
Drafted in the third round (75th overall) by BOS in 2015
Between 6’6″ Jacob Markstrom and 6’5″ Daniel Vladař and Adam Werner, a ton of net will automatically be covered between the three hulking goaltenders. Fortunately for the Flames, the Czech native possess other vital skills as well, with Brad Treliving citing the goaltender’s athleticism as one of the reasons why they traded for him.
As the fourth goalie off the board in the 2015 NHL draft, Daniel Vladař was a highly touted prospect in an extremely competitive draft, coming of a sparkling 2014-15 season in the Czech U20 (2.78 GAA, .926 SV%) and Czech secondary pro (1.97 GAA, .933 SV%) leagues. Dobber Prospects’ Benjamin Gallant said the following about the tall goaltender during his draft year:

Vladar is able to take away the lower part of the net with his quick leg reflexes and some have compared him to Dominik Hasek in terms of his reflexes.

Obviously quite the lofty comparison there, however, Vladař has certainly developed quite nicely since being drafted six years ago; now looking poised for a full time backup role at the NHL level.
While he dominated at every level, other than for a bad Atlanta Gladiators team, the stats don’t look too well for Vladař at the NHL level from a macro perspective. Thus, lets dive into each game to see if the individual results suggest something else.
Aside from the last game against Washington, which saw the Bruins missing half their regulars due to injuries and Vladař not getting pulled due to Jeremy Swayman starting the night before, the Prague native has had a solid start to his NHL career. While still very green, Vladař showed the poise and confidence of a veteran. Dan Ryan of Stanley Cup of Chowder breaks Vladař’s current game down the best:

I’d say one of his strengths is that he’s a “battler,” in that he never quits on a puck or on a chance to make a save. His positioning is relatively solid, and his composure in the net is pretty good too. He’s not really a scrambler, and looks like he’s in control in the crease. In terms of improvement, I’d say consistency is probably what he needs most. He seems to have all of the tools, and has shown the ability to put them together too. It’s just a matter of doing it. I’m not sure that he has any glaring weakness, like a poor glove hand or bad rebound control or whatever. He likely just needs a little more experience, a little more time, a little more seasoning to put it all together.

This may be the best example for Dan Ryan’s thorough overview.

Daniel Vladař’s waiver status and Jeremy Swayman’s mini-breakout allowed Brad Treliving and Co. to pick up a seemingly NHL ready goaltender with lots of potential. After bouncing between three different leagues last year, the 2021-22 season will likely see Vladař stapled to the Flames roster; providing the goalie with some consistency for the first time in a while. The challenge for the 24-year old will be to steal starts from a bonafide NHL goaltender in Jacob Markstrom, especially given Darryl Sutter’s tendency to stick with his #1 tender.
Following a stellar 2016-17 season in the AHL, David Rittich broke into the NHL scene as a 25-year old, and hasn’t looked back since. Fellow countryman, Daniel Vladař is stepping into that same role one year younger with an even better resume, leaving Flames fans and pundits excited for this upcoming year. With two years left on a $750,000 AAV contract, I’d except Vladař to get at least 25 starts during the 2021-22 season, allowing him to work on his consistency issues and further build on his impressive list of experiences.