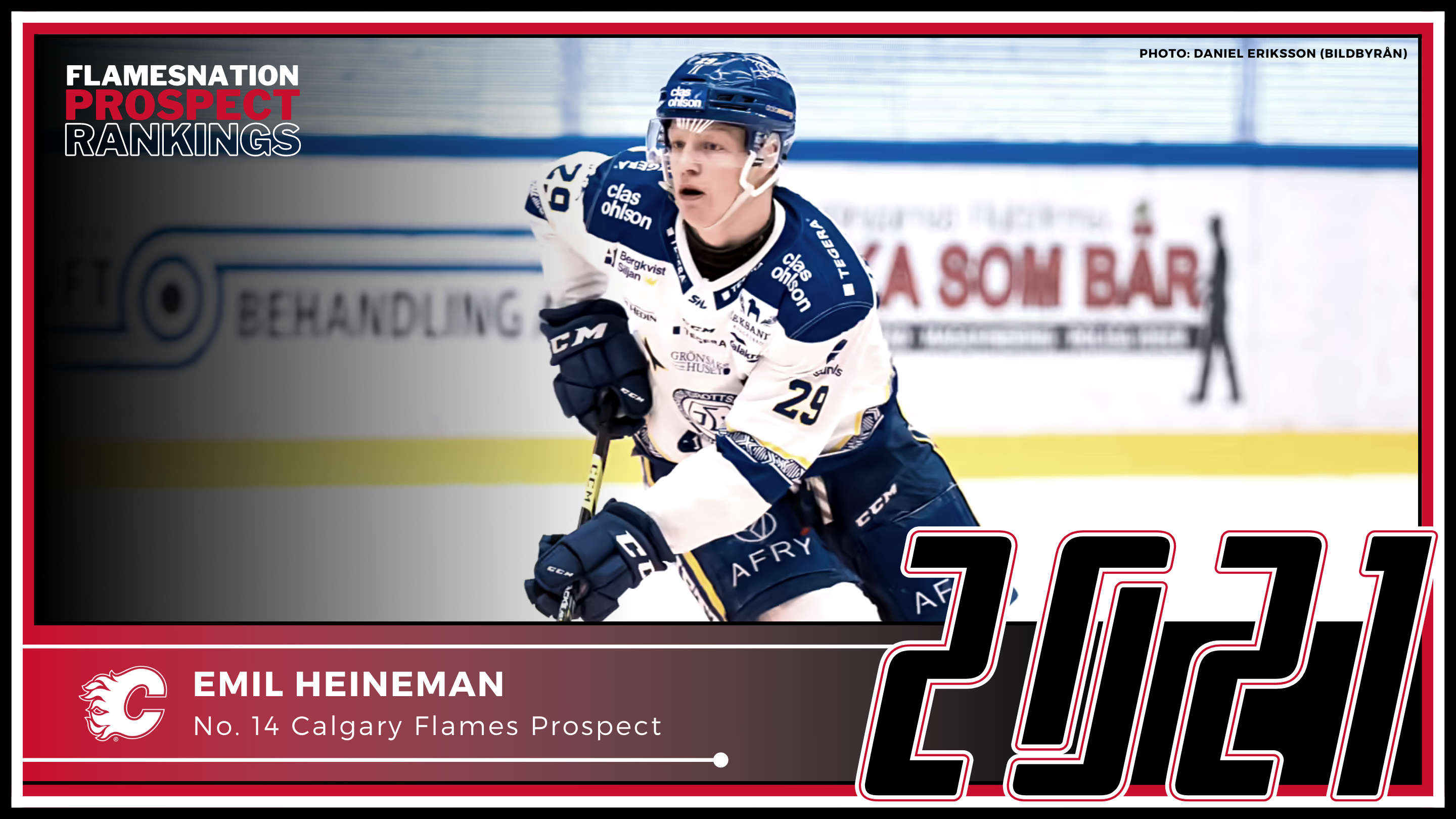 By Mike Gould
1 year ago
Only two of the prospects on our 2021 top 20 list joined the Flames through a trade.
19-year-old forward Emil Heineman checks in at 14th overall on this ranking approximately four months after being acquired from the Florida Panthers. Calgary also picked up Florida’s 2022 second-round draft pick in the trade, which saw 2014 fourth-overall selection Sam Bennett become a Panther.
The Panthers selected Heineman in the second round of the 2020 draft. He’s a fast winger who can effectively use his 6’1″ frame and is capable of lining up on both sides.
Heineman likely won’t arrive in North America until the 2022–23 season. He’s entering the final year of his Swedish Hockey League contract and still has plenty of room to develop in his home country.
Emil Heineman
Left-handed winger
Born Nov. 19, 2001 (age 19) in Leksand, SWE
6’1″, 185 pounds
Drafted in the second round (No. 43) by FLA in 2020
When the Calgary Flames acquired Heineman from Florida in April, Sportsnet’s Elliotte Friedman broke the news of the transaction and described the return for the departing Sam Bennett as the “equivalent of two [second-round picks].”
Yes, Heineman is still less than a year removed from being taken in the second round (No. 43) of the 2020 NHL Entry Draft. He was also projected by many forecasters to be selected significantly lower, with Bob McKenzie, McKeen’s Hockey, and Future Considerations all slotting Heineman in as a likely third- or fourth-rounder in their pre-draft rankings.
The Flames ended up selecting defenceman Yan Kuznetsov with the No. 50 pick in the 2020 draft — seven spots after Heineman went to Florida — and our own Pat Steinberg reported Heineman was on the team’s radar in that range.
Florida selected Heineman immediately after he dominated Sweden’s J20 SuperElit league with 26 goals in 29 games. That level of production put him in rarified air among the last two decades of SuperElit players; since 2000, only Anze Kopitar (28 goals in 30 games) has scored at a better rate while playing in SuperElit during his first year of draft eligibility.
Heineman played 43 games with Leksands IF of the top-level Swedish Hockey League in 2020–21. He became more productive and earned more ice-time as the season progressed and, according to Pick224, finished the year having been on the ice for 16 Leksands goals at 5-on-5 and only 10 against (good for a +7.46 relative goals-for percentage, sixth-highest on the team).
In four playoff games with Leksands, Heineman picked up an assist and averaged 13:35 of ice-time per game. Among his fellow U-20 players, Heineman’s 13 points in the regular season placed him behind only Moritz Seider, William Eklund, Albert Johansson, Alexander Holtz, Lucas Raymond, Noel Gunler, and Albin Sundsvik. Certainly not bad company.
Alexa Potack of Dobber Prospects described Heineman as an excellent skater who performed reasonably well in his first full Swedish Hockey League season:

Speed is the forefront of Emil Heineman’s game. He has a powerful stride and his ability to fly down the ice is above that of most SHL players, which makes him an incredibly difficult player to defend. In addition, his shot is as much of a threat. In his draft year, he nearly averaged a goal per game in the J20 Nationell. This pace has naturally slowed down as he is competing against men, but he scored 7 goals last season, which is impressive for a first full year in the SHL. Heineman has one season left on his SHL contract and a trip across the Atlantic may be in store for this young and speedy winger. The expectation for Heineman on the North American stage should be to continue his style of play but to expect to see his production levels drop as the quality of his competitors will increase, as it did during his transition to the SHL. He certainly has the ability to one day make an NHL roster but more experience playing alongside and against men will reveal his ultimate role.

Barring any change in plans, Heineman will return to Leksands for the 2021–22 season and should play a larger role as an SHL sophomore.
With Marek Hrivik and Peter Cehlarik — two of Leksands’ leading scorers in 2020–21 — both gone, Heineman should be able to move up the lineup and play more minutes on a consistent basis. He also still has the ability to physically mature and become more involved in the dirty areas of the ice.
If all goes well this season, Heineman could be a leading candidate to sign an entry-level contract with the Flames in the summer of 2022. He’d likely skate with the Stockton Heat in the 2022–23 season, assuming he doesn’t opt instead to extend his contract in Sweden.