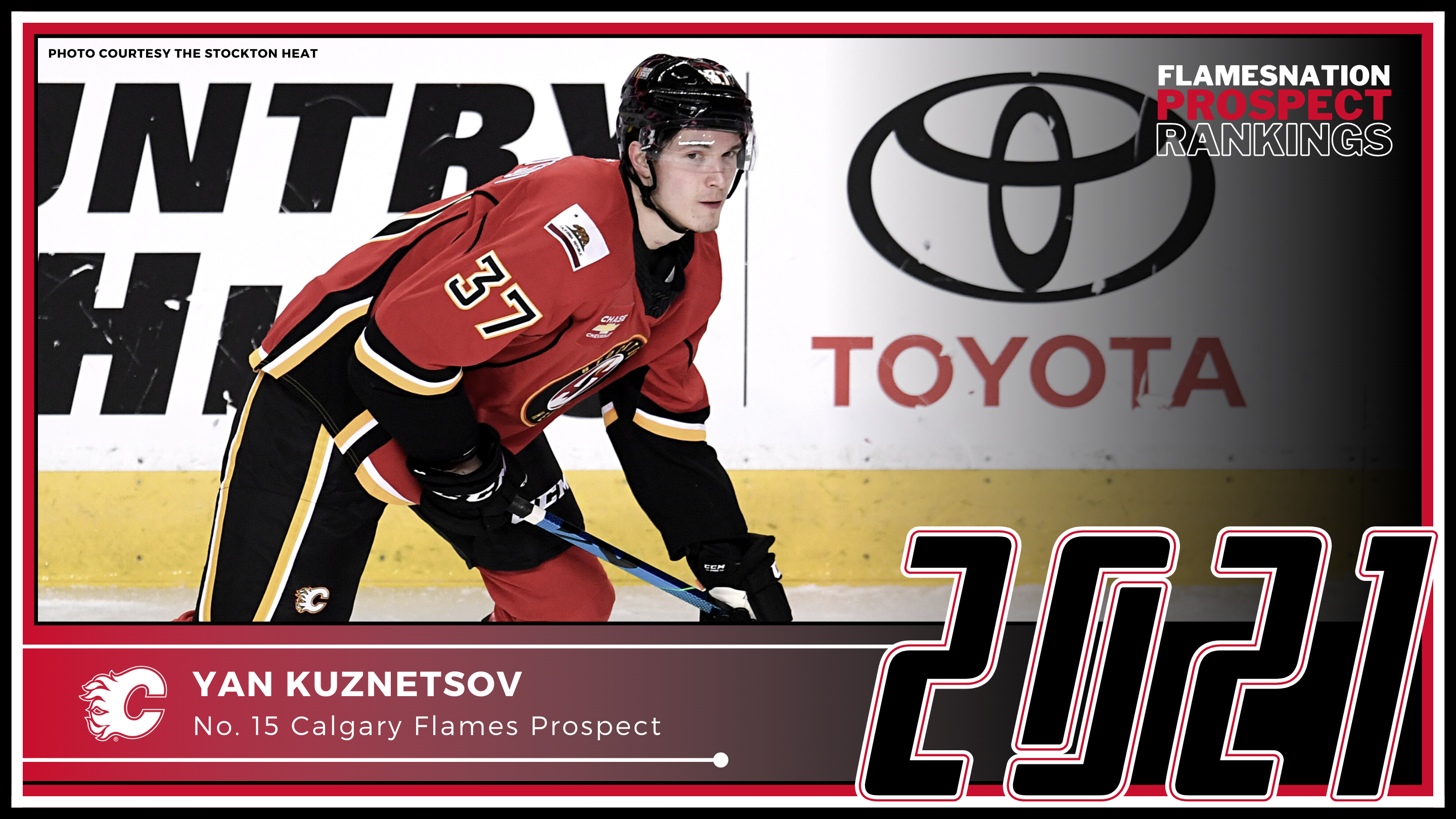 By Mike W
1 year ago
Coming in at number 15 in the 2021 edition of Calgary Flames prospect rankings is defensive stalwart Yan Kuznetsov. The 2020 second-round selection is fresh off a solid and busy year where he was strong in his final NCAA season, secured a spot on the Russian World Junior club, and made his professional debut with the Stockton Heat.
Let’s check in with the promising defensive prospect.
Yan Kuznetsov
Left-handed defenceman
Mar 9 2002 (age 19) in Murmansk, Russia
6’4”, 215 pounds
Drafted in the second round (50th overall) by CGY in 2020
The hulking Russian had a strong and busy sophomore season at the University of Connecticut taking strides as a shutdown defender. The defensive-minded Russian suited up for seven games in the 2021 World Junior Championships and the Flames inked him to a three-year entry-level contract in March.
Kuznetsov was selected 50th overall in 2020 based on his size, smarts, relative mobility, and defensively smothering style of play. He looked strong utilizing these attributes over the past two seasons for the Huskies. Kuznetsov got his feet wet as the youngest player in the entire NCAA suiting up for 34 games in 2019-20.
He made notable defensive progress in a shortened 2020-21 season as he was leveraged in a top-pairing defensive role and produced solid on-ice numbers at even strength. The 19-year-old was on the ice for 12 even-strength goals for and only eight against. He was quietly solid for the Russians at the World Junior Championships as well.
After only two seasons of college hockey, he became the first NCAA skater drafted in 2020 to sign an entry-level contract and concluded his year skating in six games with the Heat.
Over the summer the Murmansk native was selected in the Canadian Hockey League’s Import Draft by the Saint John Sea Dogs making him eligible to play in the AHL, ECHL or the QMJHL in 2021-22.
While Kuznetsov will never wow anyone with his skill, his strong defensive game is progressing nicely. He has always moved adequately for a man of his stature and plays smart, positional hockey. His effective even-strength play with Connecticut this year indicates he is on his way to becoming a reliable blueliner capable of eating away tough minutes.
Josh Tessler, director of scouting over at SMAHT Scouting, highlights Kuznetov’s strengths and explores areas that still need work:

Kuznetsov is a defensive defenceman, but the hope was that he would start to develop an offensive game. He does have a booming shot from the point, but he needs to be more selective with his shot. Forwards will draw towards him and bends down for shot blocks. Instead of Kuznetsov, playing around those attackers and using stick-handling to find open ice, he will decide to take a shot against the diving attacker. Ultimately, that doesn’t lead to much success. In addition to his shot selection, he will pinch up to try to get involved in puck battles along the half-wall, but he lacks the speed to get involved before the opposition can move the puck away from half-wall and that will lead to vulnerable situations for his defensive partner.
While his offensive game hasn’t grown too much from his draft year, his defensive game has improved. He has solid gap control in the slot and deploys tight man-on-man defense. When there is a loose puck towards the defensive zone blue line and he’s skating in line with an opponent who is looking to skate to the loose puck, he will look to box him out. Kuznetsov uses a quality active stick when defending in the slot to force puck movement. Similar to his speed in the offensive zone, he can be a tad slow with his puck movement when covering a puck carrier who is shifting from right to left. Due to his speed, the puck carrier will find gaps to exploit. In the neutral zone, when defending the rush, he’ll skate towards the center of the blue line and forces the attack to skate along the boards. The only other area that needs development in the defensive zone is his outlet breakout passes, he can be inconsistent with his breakout pass accuracy.

Kuznetsov’s status for next season is intriguing due to his aforementioned selection in the CHL Import Draft. It grants Flames management multiple options and a great deal of flexibility in terms of his development path.
Playing in the QMJHL would mean top pairing billing and plenty of ice time against highly offensive players. The Sea Dogs would undoubtedly be delighted to obtain the shutdown services he would provide. Perhaps he could be paired and foiled with fellow Flame prospect and offensive dynamo, Jeremie Poirier.
The decision on how to proceed will depend on if the Flames think Kuznetsov is ready to be a full-time pro in the AHL. Likely, this will be the starting place as, if the Russian plays a game in the QMJHL, he becomes subject to the CHL transfer rules and wouldn’t be able to go back to the AHL or ECHL until the QMJHL season ends.
It stands to reason that Flames are looking to keep him in the pro ranks having signed him to his entry-level deal after only two years of college play. The bulky blueliner could start with the Heat and, if the Flames deem it prudent for his development, be assigned to Saint John.
A top-four slot with the Heat will be up for grabs and Kuznetsov should be eyeing second pairing billing. He will be competing with the likes of Ilya Solovyov and Colton Poolman for minutes in Mitch Love’s top quartet of defenders.
Regardless of where he finds himself in 2021-22, Kuznetsov will be looking to earn significant playing time and continue to hone his defensive craft. While there are offensive deficiencies, the 19-year-old’s progression has been nothing but encouraging. A smart player with strong fundamentals, the former second-round pick’s future looks bright.