By Shane Stevenson
1 year ago
The Calgary Flames aren’t too deep in the prospect cupboards at a few spots: they could use more defencemen and they could use more centres. Our #2 prospect on the FlamesNation list see their best C prospect land – Connor Zary.
The Flames most notably acquired the pick used on Zary by trading down in the first round of the 2020 draft – twice. He seemingly was the team’s target all along and they were able to pick up two additional picks in addition to this quality pivot. He’s currently projected as a top 6 forward, but has sneaky potential to be better than we think he already is.
Connor Zary
Left shooting centre
Born Sept. 25, 2001 in Saskatoon, Saskatchewan
6’0”, 179 pounds
Drafted in the first round (24th overall) by CGY in 2020
Zary wasn’t taken very high in the WHL selection draft – he fell to the second round and was 37th overall (in 2016). He’s used to working, fighting, and improving every step of the way as he climbed his way up the depth chart in Kamloops. Zary ended his tenure with the Blazers as the captain of their club and will leave the junior hockey ranks with a silver WJC medal.
He’s a strong transitional player with tremendous vision. His stint with Stockton last year – where he accumulated 7 points in 9 games – brings excitement for the next level and being able to provide him with more skilled linemates. Zary does need to work on getting into the scoring areas a little better. If he can do that he could over develop into an elite player. He’s got the shot and the playmaking skills to succeed already – just need the offensive instincts to become second nature first 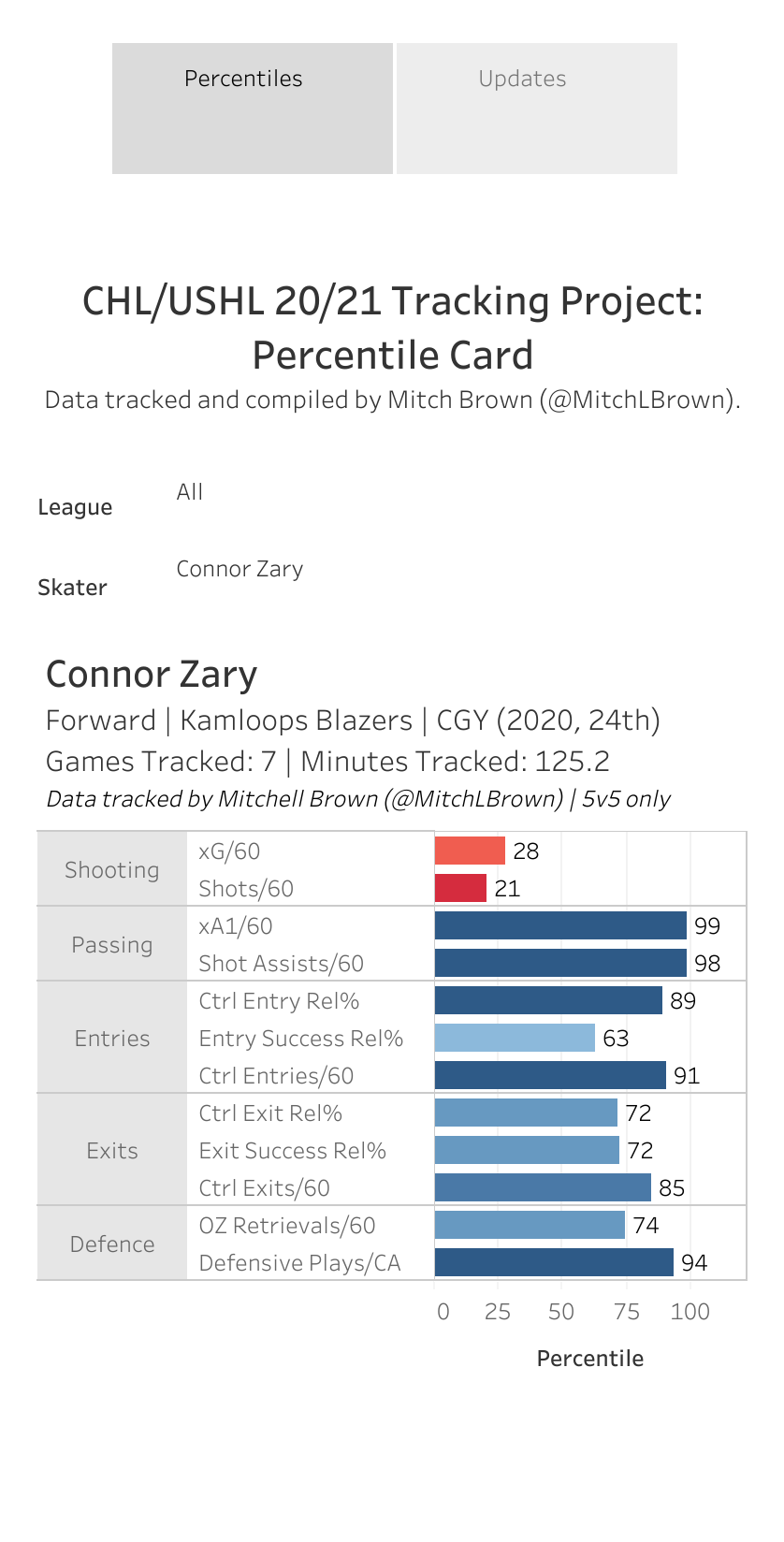 Via Mitch Brown’s tracking from last season we can see Zary’s tremendous ability to get the puck out of his own zone and transition into an attack. His passing is in the high 90’s percentiles showcasing his true playmaking ability. His retrieval % also suggests he’s not shy to go and get the puck in the corners – it’s why at the WJC he was trusted as one of their main PK forwards. He just needs to work on getting himself into better spots to shoot the puck.
Now Zary’s not projected to come in and be an impact player the level that Nick Suzuki was in Montreal. He’s waiver exempt and is better suited to joining the Stockton Heat and dominating in their top 6 – and being ready with a risk free call-up while still on his ELC. He’s not too far off playing NHL games, however, we could see him called up should injuries occur in the upcoming 2021-22 season.
Joel Henderson of FC Hockey provided a succinct assessment of Zary’s game:

Zary is crafty, creative and has incredible reaction times. One of those players who finds a way to fit on multiple different kinds of lines. He reduced the amount of shots he was taking this season and I think just focused a bit more on being that pass first kinda center.

I’m a little heavy on expectations for Zary myself. If he wants to continue to develop into a top six NHL player he needs to not lose any steps at the AHL level. Coming in and obtaining the AHL should be a priority. He’s already got more natural skill than the majority of the players in that league – he just needs to show everyone he can tie it all together.
I wouldn’t give Zary a fourth line NHL role either. He may be better than some options but at 20 years old it’s more crucial to have him play more than 18 minutes a night to continue his development. The Flames have enough depth that he should easily be able to go to Stockton – whether its for half a year or three-quarters of a season (or more) is up to the player. The Flames head coach likes to be strong up the middle – and if Zary can show strong transition and defensive structure there’s reason to believe Sutter might like him.