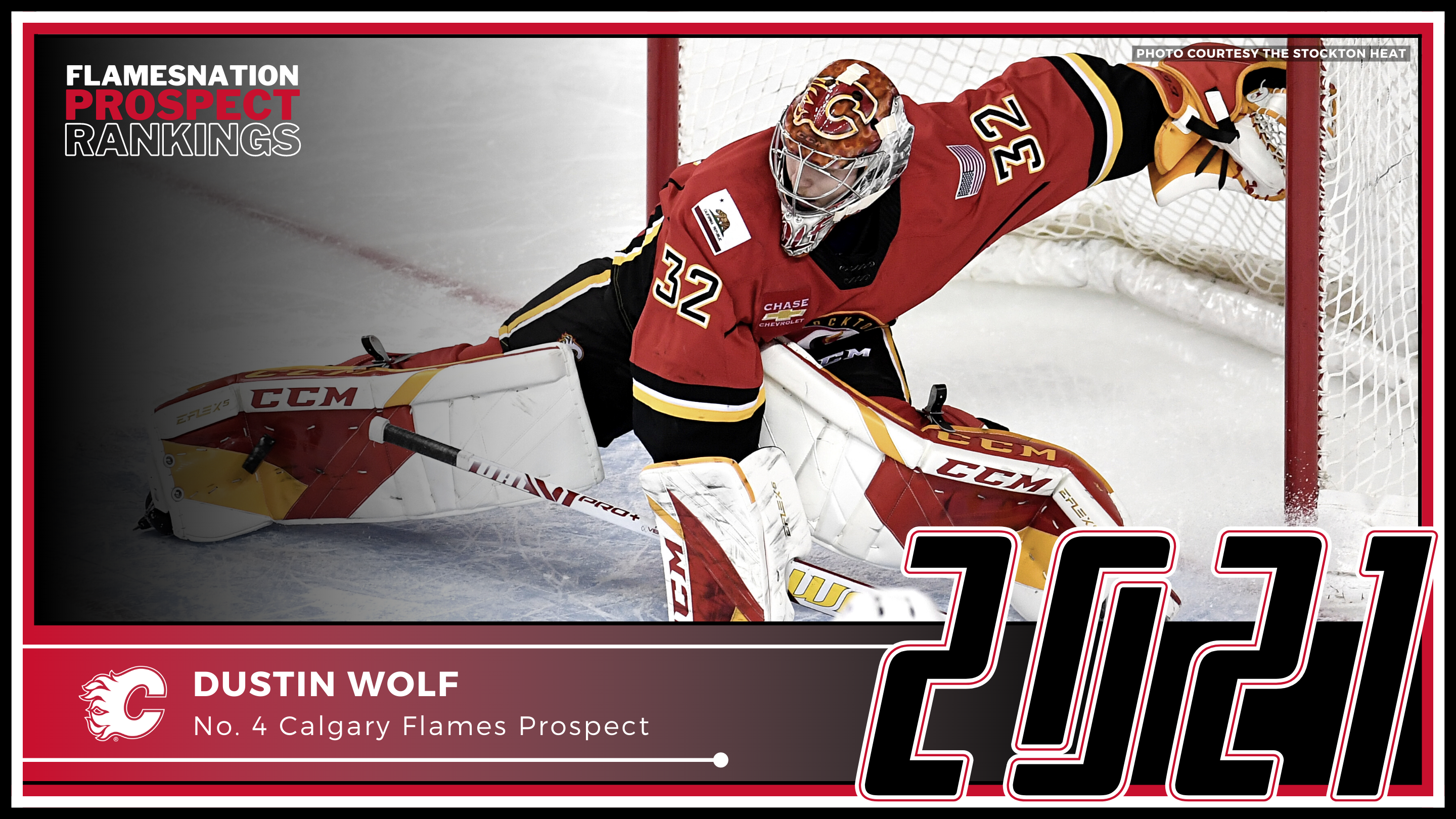 By Ryan Pike
1 year ago
The Calgary Flames have had a fairly challenging time drafting and developing goaltenders over the past few decades. But late in the 2019 NHL Draft, they snagged a talented netminder that has given some hope that perhaps that trend could be turning around.
The fourth-ranked prospect in the Flames system, according to our annual rankings, is goalie Dustin Wolf.
Dustin Wolf
Goaltender
Born Apr. 16, 2021 (age 20) in Gilroy, California
5’10”, 157 pounds
Drafted in the seventh round (214th overall) by CGY in 2019
Born in Gilroy, California and raised in Tustin – a suburb of Anaheim – Wolf found goaltending as a youngster, fell in love with it, and came up through the Los Angeles Jr. Kings minor league system. By the time he was 15 he had turned enough heads that he was drafted by the Everett Silvertips in the 2016 WHL Bantam Draft.
Wolf moved north and joined the Silvertips full-time as a 16-year-old in 2017, working as backup to Carter Hart. After Hart’s departure to the pros in 2018, Wolf became Everett’s starter just in time for his draft year. He had a pretty big 2018-19 season, representing the United States at the Hlinka Gretzky Cup, leading the WHL in goals against average and save percentage, and being named the top scholastic player in all of major junior hockey. (Prince Albert’s Ian Scott narrowly beat him out for the Dub’s award for top goalie.) Wolf was the fourth-from-last player selected in the 2019 NHL Draft – he’s a smaller-than-average goaltender, which likely pushed him to the seventh round on draft weekend despite having crazy-good numbers.
The following season, Wolf was even more impressive. He made Team USA’s roster for the World Juniors, serving as backup to Spencer Knight. He led the WHL in basically every goaltending category, being named the top goaltender in major junior hockey and among all American juniors. In the shortened 2020-21 season, he started three games with the American Hockey League’s Stockton Heat (winning twice after a shaky first appearance) and then returned to dominate the WHL. Once again, he was named the WHL’s top goaltender and was neck-and-neck all season with Sebastian Cossa for the lead in every major category. He won a gold medal at the World Juniors, again serving as Knight’s backup.
There are no guarantees in life. But major junior success is a good indicator of possible future pro success. Wolf is one of the most successful goaltenders in recent WHL history, finishing his career among the all-time leaders in wins, shutouts, goals against average and save percentage.
Our pal Joel Henderson of FC Hockey provided this assessment of Wolf’s game:

He keeps his glove high and sits low in his stance when he’s ready. Let’s him cover the lower half, explode laterally, and I think he’s got good rebound control. Goalies like him I sometimes worry they give up too much of the top portion of the net but he seems to mitigate that well with the glove placement. Talkative kid too I think.

Well, after trouncing WHL competition and winning basically everything he could’ve won as a junior goaltender – he unfortunately had two playoff years wiped out, so he had to settle for regular season and World Junior accolades – Wolf is going pro this season.
The transition to professional hockey is something that’s flummoxed a lot of promising Flames goaltending prospects. Dating back to Leland Irving, tons of promising junior and college goaltenders have become rather ordinary as they approached the NHL. The Flames have a slow-and-steady approach in mind and hope to give Wolf plenty of opportunity to adapt to the AHL. With Jacob Markstrom under contract through 2025-26, the Flames don’t need Wolf to be an amazing pro overnight. Given their past history with goaltenders, they’d probably settle for him being an above-average AHL goaltender in 2021-22 (with potential for future growth).