By Shane Stevenson
1 year ago
He probably flies under the radar as one of the most skilled prospects in the Calgary Flames’ cupboards. Most likely because he’s a defenceman and they’re supposed to do defence first, offence second. Not the man that comes in at number 9 – Jeremie Poirier.
A third-round pick in 2020, Poirier is already a point-per-game defenceman for the Saint John Sea Dogs of the QMJHL. He’ll be playing top line minutes and quarterbacking their power play in 2021-22.
Jeremie Poirier
Left-shooting Defenceman
Born June 2nd, 2002 in Salaberry-de-Valley, PQ
6’1” 190lbs
Drafted third round (72nd overall) by CGY in 2020
This D-man came up in the Quebec junior system playing in the QMAAA the same time as Jakob Pelletier, Samuel Poulin, and Alexis Lafrienere. He tallied up 44 points in 78 games over the span of two seasons in that league – it got him drafted eighth overall in the QMJHL draft in 2018 to Saint John.
Poirier has never been one to shy away from the scoring aspect of the game. He’s an elite contributor to his team’s offence with great numbers on the boxscore as well as microstats. Here’s manually tracked data from Mitch Brown that shows how good Poirier is in transition and offensive chance creation relative to his QMJHL competition. 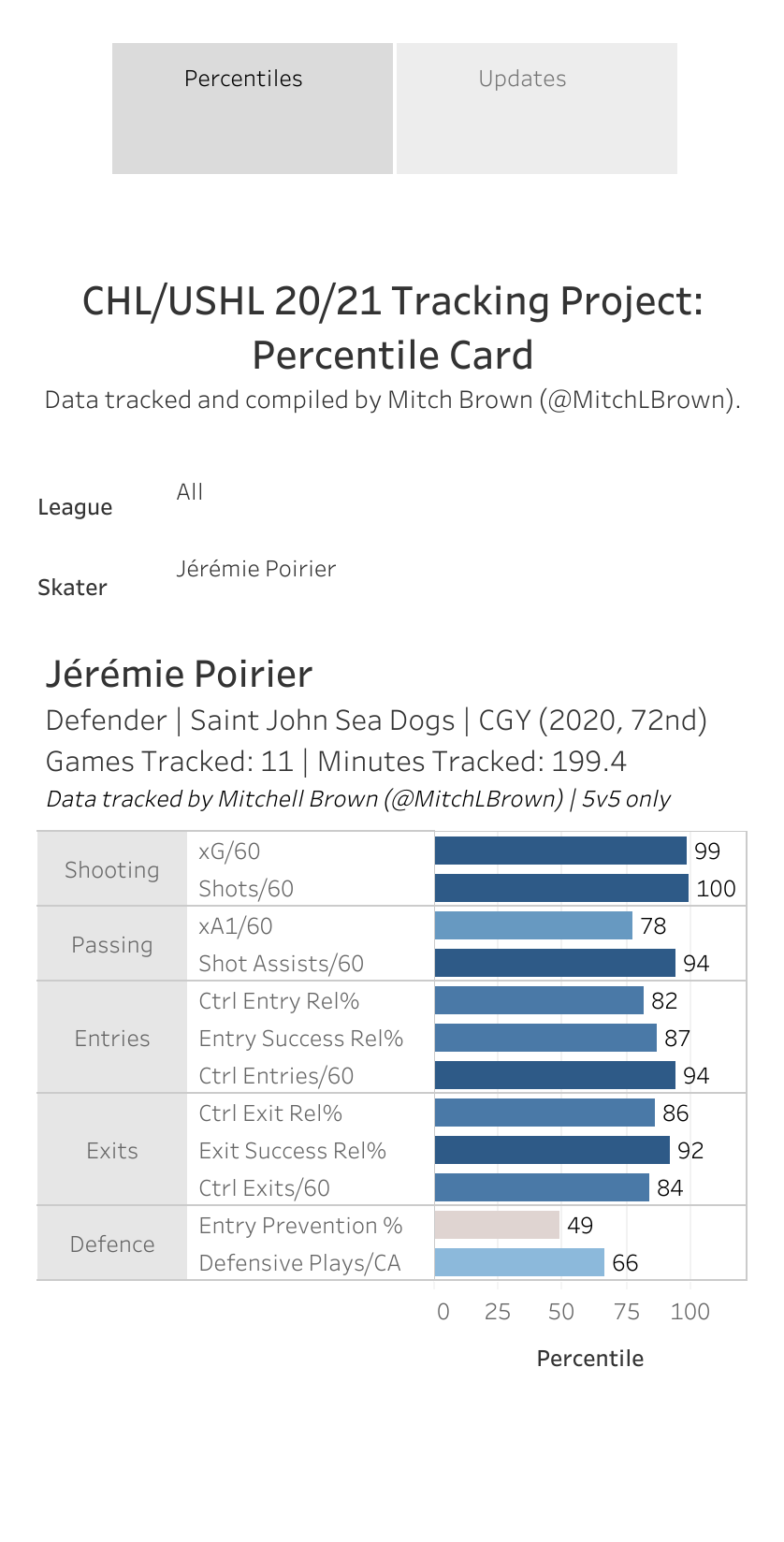 As we can see Poirier is great at getting the puck out of his own zone with possession – he’s got a tremendous first pass. Accurate and on the money way more often than not. Once in the offensive zone he’s one of the most dangerous scoring threats. His vision to find passing lanes is absolutely top tier – five stars.
The suspect part of his game, how much defensive positioning he sacrifices to get goals. Often getting caught up in the rush or out of position trying to get a jump start on the rush. If his speed keeps developing it should be able to compensate – as would a solid defensive minded partner.
Jerome Berube of HockeyProspect.com had this assessment of where Poirier is in his development:

Not much has changed with Poirier since last season; he’s still very much a high-risk player with a high level of boom or bust potential. His puck skills, shooting ability and overall offensive potential are his best attributes. He loves to have the puck on his stick, he likes to play that one on one game and beat players with his very good hands. The skating, the decision making and the lack of defence are still the biggest weakness which makes his NHL projection risky. In today’s NHL it’s tough to play full-time on defense in the league if you can’t defend, NHL coaches just won’t put on the ice players they can’t trust in their zone. There’s a lot of work that needs to be done with his play in his own end but also him making better decisions with the puck (he needs to learn to play a more simple game instead of trying too much on his own too many times) and improving his skating which is more about his agility and backward skating.

The number one thing I would expect is for Poirier to clear a point per game again. It’s almost essential for his development and outlook that it continues, especially on a power play with other offensive threats that Saint John employs. Expecting to get upwards of 23 minutes a night this prospect expects to be one of the premier defencemen in the whole league this upcoming season.
While he’s not yet under contract with the Flames it would be reasonable to suspect that should he improve like projected the Flames will offer him an entry-level deal. Not many D prospects have Poirier’s offensive potential and sense – he’s a very intriguing prospect to watch.