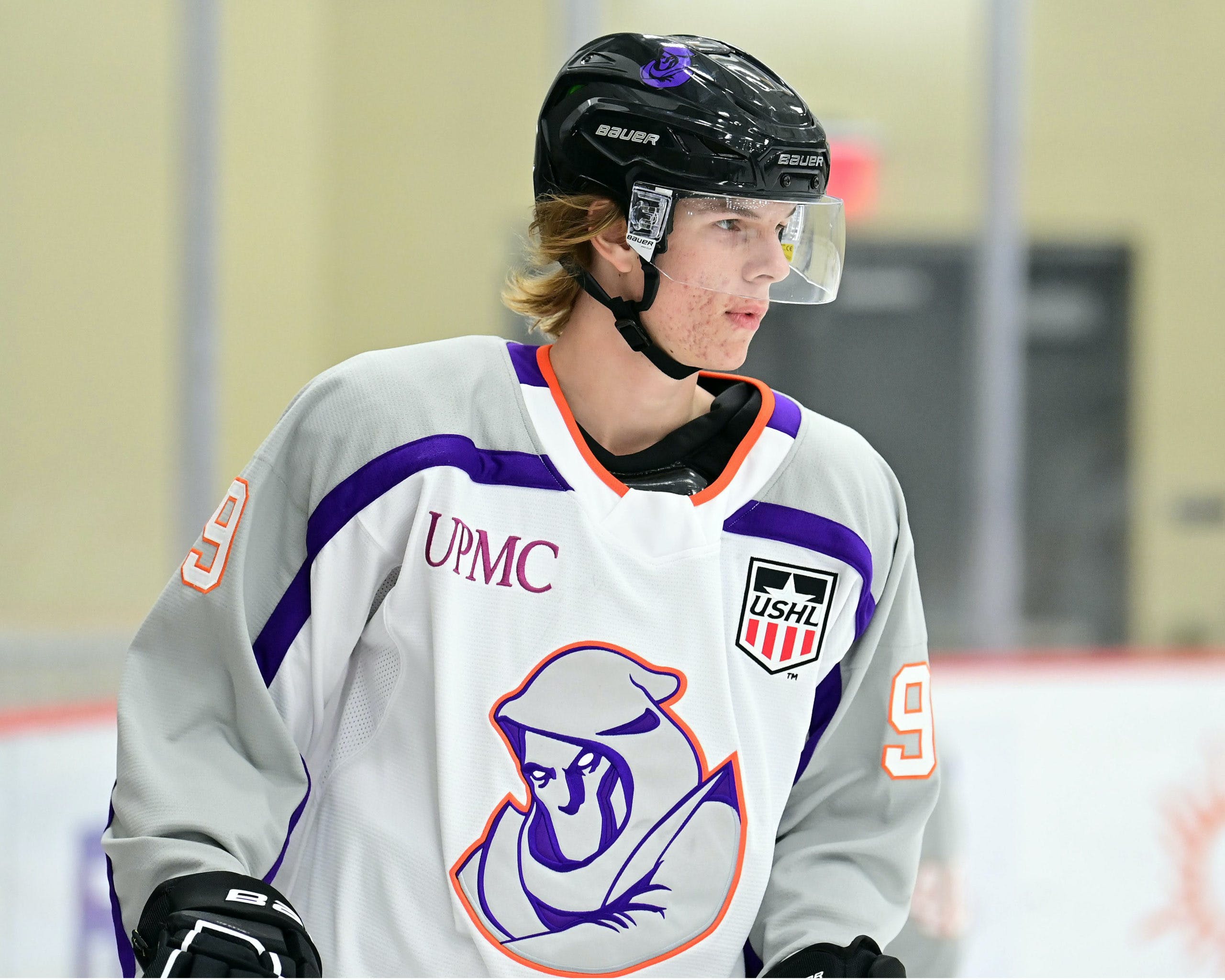 By Ryan Pike
4 months ago
Over the past decade or so, the United States Hockey League has emerged as one of the top junior leagues in the world. In fact, it might trail only the three Canadian major-junior circuits in terms of providing the National Hockey League with high-end prospects. The Calgary Flames nabbed one last summer, grabbing Matt Coronato from the USHL in the first round.
Forward Adam Ingram is one of a few USHLers who could catch the eye of the Flames at 59th overall.

A product of the Winnipeg suburb of West St. Paul, Ingram is a left shot winger listed at 6’2″ and 174 pounds. An October 2003 birthday, he’s one of the older first-time eligible players in this draft class.
Ingram came up through local minor hockey in the Winnipeg area, and spent the pandemic-addled 2020-21 season in the MJHL in Selkirk. He’s taking the somewhat unorthodox route of heading to the USHL prior to college, so he jumped to the Youngstown Phantoms for 2021-22 after committing to St. Cloud State for 2022-23. (His WHL rights are held by the Red Deer Rebels, reportedly.)
In his one year in the USHL, Ingram showed well and impressed many scouts.
Here’s Evan Pace of Dobber Prospects on Ingram’s game:

Adam Ingram is a talented playmaking forward with good offensive upside. He has solid puck skills, vision, and hockey sense which help him rack up assists, but he lacks high-end skating ability and his two-way game is still a work in progress. His passive style of play often results in him being late in support of his teammates but he remains in the middle of the ice where he is able to contribute in all zones. He takes care of the puck, never forcing unnecessary plays or taking risky opportunities, which helps his point production and limits transition chances for the opposition. Ingram utilizes clean strides and explosiveness in his skating when he has space in front of him, however, he does lack consistent intensity.

Chris Peters of Daily Faceoff had Ingram at 54th on his Top 100 ranking:

Averaging a point per game in his first year in the USHL, Ingram had some high points, but his game seemed to plateau a little bit as the season wore on. That’s why he’s dropped a bit from my mid-season rankings. That said, he has good size, I think the skating is fine and his skill level is expanding. He gets to the middle well and can score consistently.

He’s got size! He’s got skill! He scores consistently! You can easily understand why NHL teams would covet him. The only question marks may involve his relative lack of high-end experience – all due respect to the SJHL, but he only has a year of USHL under his belt so he might be challenging to assess – and his lack of international experience, which is a product of him being from Canada and not really his fault.

Ingram had 26 goals and 55 points in 54 USHL games. He led the Phantoms in both points and goals, and trailed only Dylan James of Sioux City for the rookie lead in those categories.
Ingram was named to the USHL’s All-Rookie Team for his efforts.

Ingram is a good prospect with a lot of potential, and he has qualities that the Flames would likely really covet. Unfortunately, a lot of other teams probably covet him, too.
Here’s a snapshot of the various draft rankings:
Daily Faceoff: 54th
FC Hockey: 49th
Dobber Prospects: 58th
TSN (Bob McKenzie): 54th
TSN (Craig Button): 83rd
The Athletic (Scott Wheeler): 48th
Smaht Scouting: 56th
Central Scouting: 27th (North American skaters)
He could always slide a bit if teams skew towards centres and defencemen more than we anticipate, but it seems likely that Ingram is off the board before the Flames select at 59th overall.