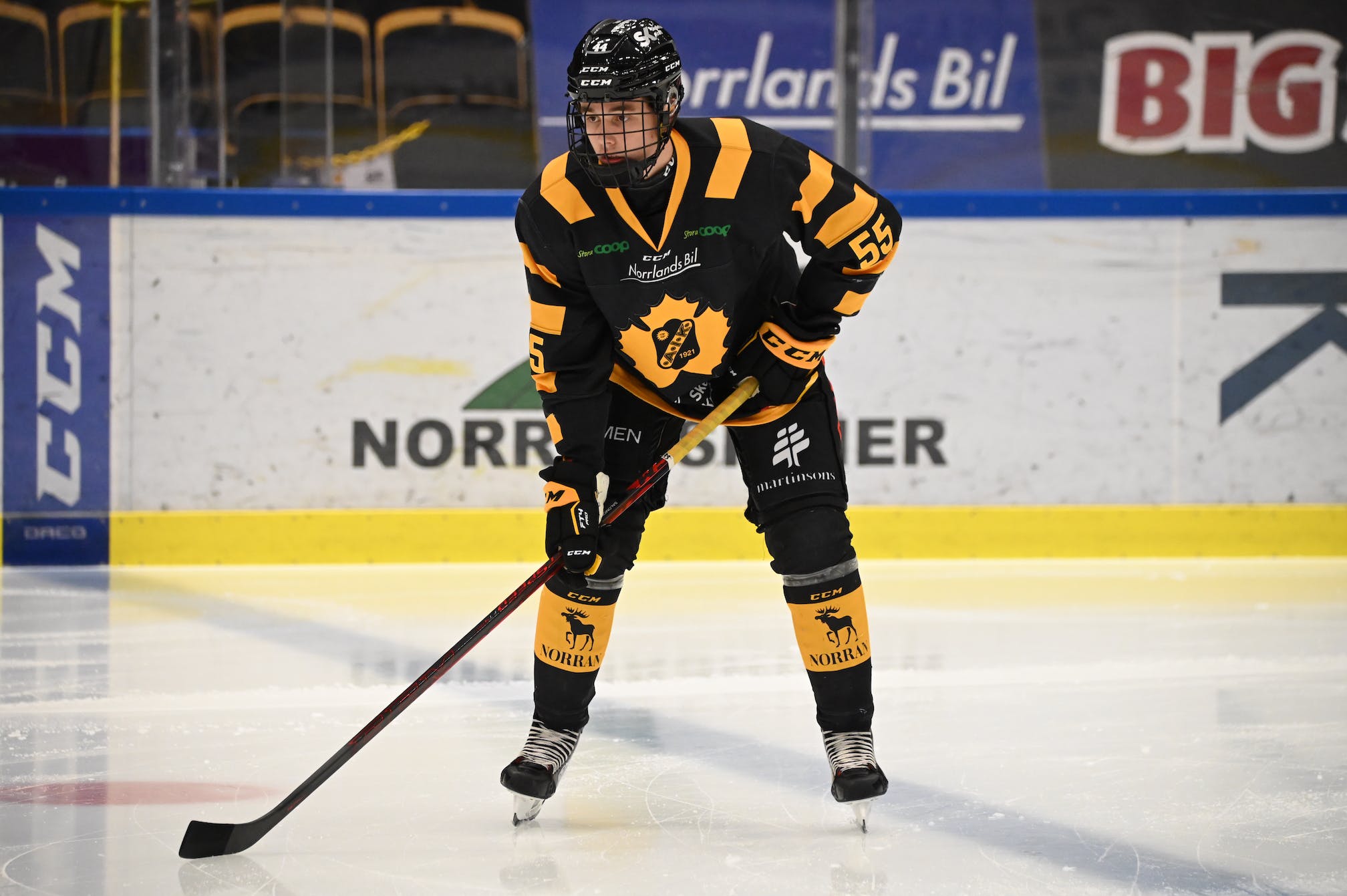 By Ryan Pike
5 months ago
In an ideal world, the Calgary Flames would probably want a talented, smooth-skating blueliner to add to their prospect pipeline at the 2022 NHL Draft. When it comes to blueliners that might be available when they select in the second round, Swedish product Elias Salomonsson may be almost tailor-made for the club.
Let’s dive into what makes Salomonsson such a Flamesy young defenceman.

Hailing from Skelleftea, in northern Sweden, Salomonsson is a right shot defender listed at 6’1″ and 183 pounds. He was born at the tail-end of August 2014, and is actually just a couple weeks away from being too young for the 2022 draft class. So everything he’s accomplished to-date has been done while being usually the youngest possible person in his age cohort at virtually every turn.
As is typical with good Swedish players, Salomonsson has also played a few years ahead of his actual age group. At 13, he was playing in under-16 hockey. His 14-year-old season saw him play mostly under-16 (with a tiny bit of under-18). His 15-year-old season saw him transition from under-16 into primarily under-18 hockey. His 16-year-old season saw him jump into Sweden’s under-20 league – one of the better junior leagues on the planet – and he made his pro debut in the Swedish hockey league, too. (He also played at the Under-18 Worlds for Sweden.)
His draft eligible season was spent entirely as a 17-year-old – he turns 18 on Aug. 31 – and saw him play mostly in Sweden’s under-20 league, but he also played 10 SHL games and represented Sweden at both the Hlinka Gretzky Cup and the Under-18 Worlds. He’s super young but he’s played a lot of important hockey in good leagues.
Dobber Prospects’ Nick Richard had this assessment of Salomonsson at mid-season:

A couple weeks short of only being eligible for the 2023 draft, Salomonsson has plenty of room for growth and already possesses a solid base of skills to build around. He has decent size and good four-way mobility, allowing him to lead his fair share of rushes from the back end. He is a strong skater, if not overly explosive, and covers the ice pretty well. Salomonsson shows good instincts in the offensive zone but will need to clean up some of his decisions with the puck. That said, he processes the game at a high-rate for the J20 level and there is reason to believe his skillset will translate as he climbs the ranks. He sticks to his lanes defensively, has a good active stick, engages physically, and his shot is a weapon from the point. He could be a bit of a project but Salomonsson has potential as a top-four defenceman at the NHL level.

Salomonsson has a high ceiling with his excellent puck-moving ability and playmaking skills. His tool kit offensively is on par with the best defensemen in the draft. Though a lot has been made about his defensive struggles, it will be important to let Salomonsson further develop his top qualities. It would be so easy to ensnare his creative talent with harsh restrictions.
Salomonsson’s overall development will probably take longer time than we previously thought. At this point of the season (January 2022), he looks like a player that will require some grooming by the team that drafts him. Even though he could slip to the second round, Salomonsson has a grand upside for a team that is willing to be patient.

Chris Peters from Daily Faceoff broke down Salomonsson’s game in his Top 100 rankings:

A solid defender with good mobility, Salomonsson has some clear pro traits, especially given his size. He doesn’t have enough offensive consistency or skill to suggest he’ll be an especially strong puck-mover at the next level. The size and mobility he has offer a ton of intrigue, though.

Salomonsson’s youth, mobility and potential ceiling are the big drawing points to him as a prospect, while it seems like his decision-making with the puck needs a bit of tidying up. He may be a little bit of a project, but there seems to be a ton of potential there. (His mobility makes him seem a little bit similar to Oliver Kylington, who simply needed to rein in some of his decision-making foibles over time.)

Salomonsson had 11 goals and 22 points in 35 games in the J20 Nationell. He was 25th among all defenders in points, and 15th on a per-game basis among all blueliners who played 20 games (or more). His 11 goals was tied for the league among defenders. Among under-18 blueliners, he was fifth in points and first in goals.
He played 10 games in the SHL and didn’t hit the scoresheet. Among all under-18 players, he was 12th in games played. Among under-18 defenders, he was fifth in games played.
Internationally, he had one point in five games both at the Under-18 Worlds and the Hlinka Gretzky Cup.

In terms of fit, Salomonsson seems tailor-made for the Flames. He’s a young, mobile, right shot defenceman with a good amount of high-end experience both at the club level and internationally.
In terms of availability, there’s a chance he’s around at 59th overall. Here’s a snapshot of where he falls on a few draft rankings:
Daily Faceoff: 66th
FC Hockey: 48th
Elite Prospects: 88th
Dobber Prospects: 49th
The Athletic (Scott Wheeler): 39th
The Athletic (Corey Pronman): 53rd
TSN (Bob McKenzie): 53rd
TSN (Craig Button): 44th
Central Scouting: 12th (International skaters)
There’s some variation on the rankings – he’s around 51st on our blended consensus list – and so he’d need to drop a little bit to land in the neighbourhood of the Flames’ selection. If he does, they should probably nab him given how well he suits their needs.