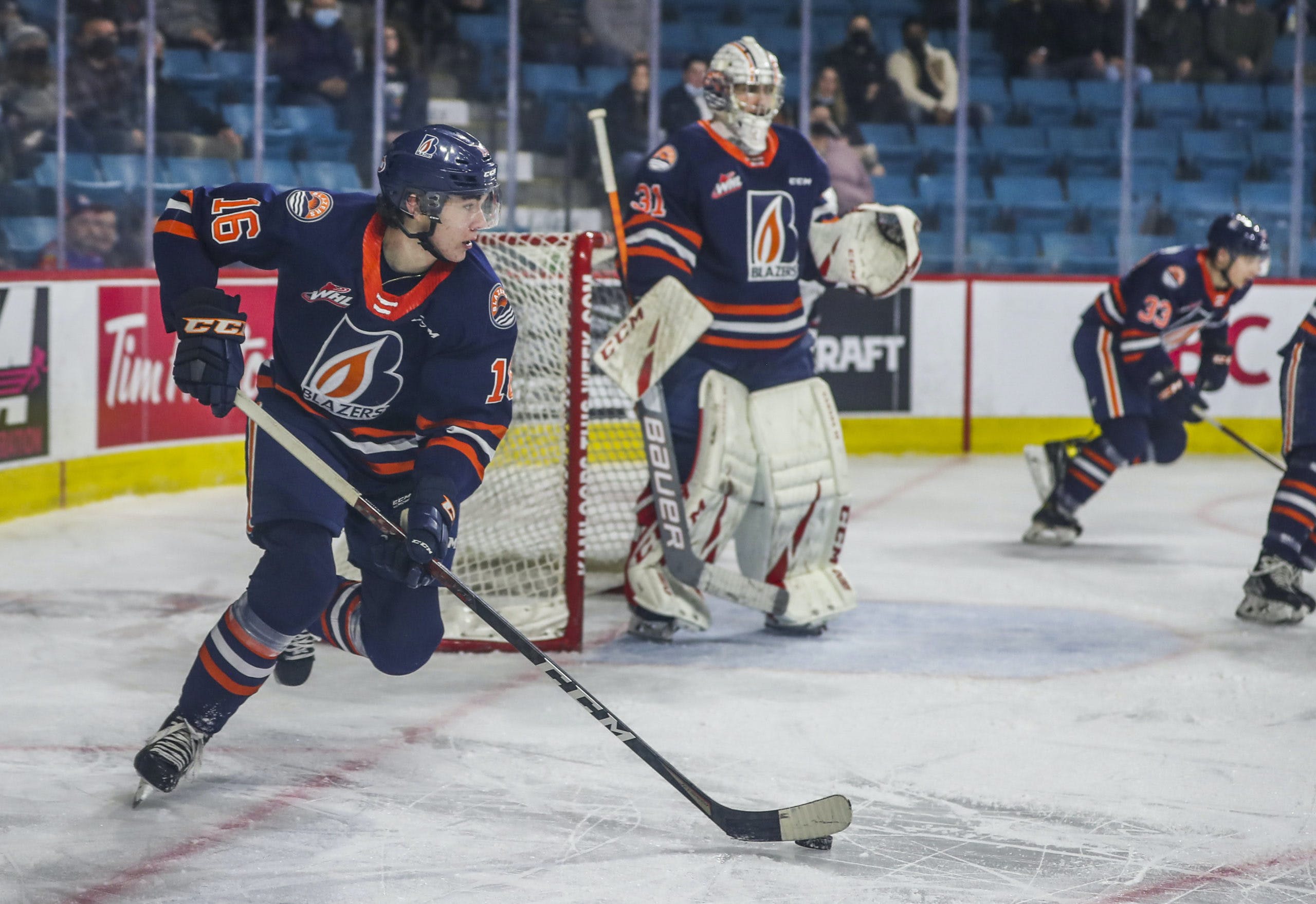 By Colton Davies
4 months ago
The second round of the 2022 NHL Draft will take place on July 8. The Calgary Flames hold the 59th overall selection in the second round, and there are a number of targets that could be available for them when they are back on the clock.
Up next, another prospect from the Kamloops Blazers, this time we take a look at a player who possesses a never quit attitude and could become a dominating checking-line forward in the NHL: Fraser Minten

Vancouver, BC product Fraser Minten has battled to get where he is at. A former fourth-round selection in the 2019 WHL Bantam Draft, Minten has become one of the top players on a highly skilled Blazers roster over the last season. He grew up playing for the West Van Academy. Much like Mats Lindgren, and many other WHL players, this was Minten’s first “full” 68-game regular season. Last season, he was of course forced to play a shortened season due to the COVID pandemic. In just 20 games, he compiled 18 points and was quick to make heads turn in the scouting world.
This past season, he registered 55 points (20 goals, 35 assists) in 67 games playing alongside fellow 2022 prospect Matthew Seminoff and 2023 prospect Connor Levis. Minten was a key component to the Blazers Conference Final run where he amassed 16 points in 17 playoff games. Minten can play all three zones reliably, with his work ethic and intangibles, there’s a lot to like about a player of his calibre.
Over at Smaht Scouting, Matthew Somma talks about Minten’s elite defensive game:

Minten is the best forward that I’ve profiled so far as far as defensive play is concerned. Once again, he can react to passes and shifts in the opposition quickly and will disrupt a lot of offensive opportunities. Minten has an active stick in the defensive zone that can create turnovers, which then result in Kamloops taking over in transition. Time and time again this season I’ve noticed that Minten doesn’t fold under pressure and instead slows the play down and forces the attacking forwards to make mistakes. Minten is getting stronger and as a result, is more willing to engage in the play physically. He’ll work along the boards and win puck battles, or at the very least wear the opposition down. This is a player whose dogged determination in the defensive zone will carry him to the NHL

Fraser has a great sense for the game and possesses all the skills necessary to not only play at the Western Hockey League level but excel in it. He will be a key contributor in helping us build and maintain a Championship team while helping him achieve his individual goals.

Minten impressed on a contending Kamloops team this season, playing an important role in their run to a Game 7 defeat in the conference final. He’s a heady three-zone player who makes smart, calculated choices with the puck and can flash skill through his hands and playmaking when opportunities present themselves. He’s got great spatial awareness and understands how to use the sheet and opposing coverage to his advantage both on and off the puck.

One anonymous WHL source had this to say about Minten’s game:

His hockey sense is through the roof. He’s a very responsible 200-foot centre. I believe he’s going to play and he’s going to carve out a role. At 19, he’s going to be a very good junior player and I could see him pushing to get onto a world junior team. I think his game is just steadily growing. He’s a guy to keep an eye on.

There are a lot of things to love about Minten’s game, and if one thing is going to get him to the NHL, it’s his never quit attitude. He is not only a defensive specialist, much like Colorado Avalanche forward Atturi Lehkonen, but he has that offensive creativity that would allow for him to complete the third or fourth line, as well as assume a role on the special teams. With a number of WHL players available, Minten has established himself as a top-10 player to draft out of the WHL and would be a phenomenal pickup for the Flames.

Minten’s successful season earned him the invitation to the CHL/NHL Kubota Top Prospects game in Kitchener, Ontario this past spring. While he did not register any points, he made himself noticeable shutting down rushes and playing an aggressive defensive game. This past season, his 55 points placed him 5th on the Blazers’ scoring leaderboard, he also tied for fifth in the goals column as well with 20 on the year. On the power play, he had 10 goals and 10 assists, once again pointing to Minten’s ability to play in all situations.

The likelihood of Minten being available at the 59 slot is actually a lot higher than you’d expect given his resume. He is a pure project player, who on the rankings board is ranked as high as 55th and as low as 101st. It’s hard to predict an NHL Draft and how it will play out, there’s always one or two teams who go off the board and everything goes sideways from that point forward. In theory, Minten should be available for the Flames to select, and with the Flames’ history of selecting Blazers’ players, Minten is not a far-fetched option. This is a player who would find himself in the AHL within the next two seasons and could see an NHL debut in the next three, given his determination and abilities to compete, and develop his game. The reward outweighs the risk when it comes to selecting Minten.
Here’s a glance at where he lands on various rankings throughout the industry:
TSN (Bob McKenzie) – 47th
TSN (Craig Button) – 94th
The Athletic (Scott Wheeler) – 79th
The Athletic (Corey Pronman) – 63rd
FC Hockey – 53rd
NHL Central Scouting – 28th (North American skaters)
Elite Prospects – 64th
Smaht Scouting – 92nd
Dobber Prospects – 94th
McKeen’s Hockey – 101st