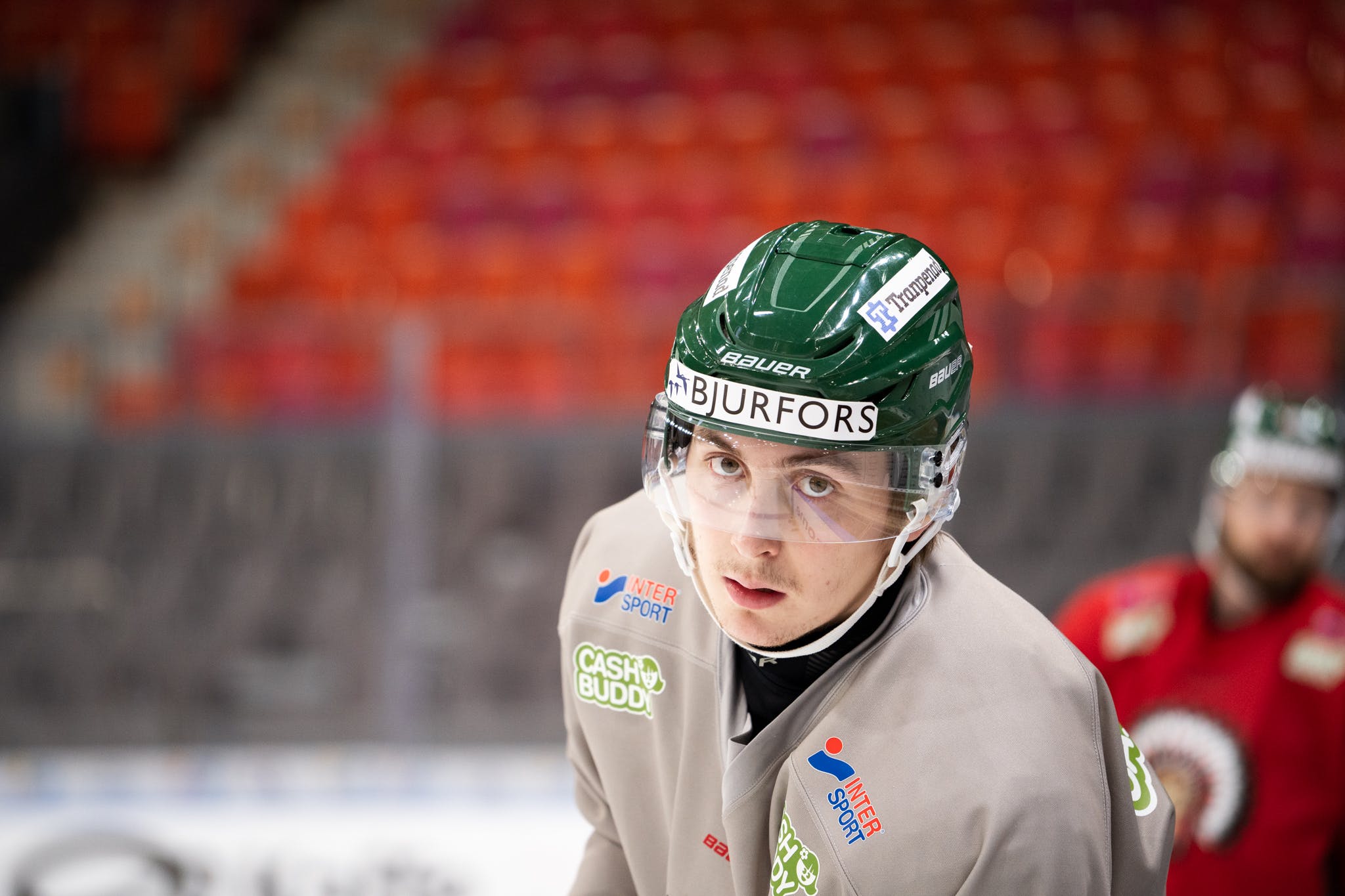 By Colton Davies
5 months ago
The second round of the 2022 NHL Draft will take place on July 8. The Flames hold the 59th overall selection in the second round, and there are a number of targets that could be available for them when they are back on the clock.
Up next is a super speedy Swede who has been making a name for himself in the legendary Swedish hockey program Frolunda. Next up: Ludwig Persson.

The 18-year-old speedy Swede Ludwig Persson is a name to keep an eye on in the second round. The 6’0″ 179-pound dual-threat center winger possesses a never-quit work attitude, an excellent release and plays with an intensity that would be a perfect fit for Darryl Sutter hockey. Persson has spent the last 5 years in one of Sweden’s top hockey programs, Frolunda. Frolunda has produced NHL stars like goaltender Henrik Lundqvist and players Daniel Alfredsson, Alex Steen and Erik Karlsson- to name a few. This rich and classy organization has had a lot of success in creating future NHL players, and Persson has the ability to become the next one.
Over at Dobber Prospects, Nick Richard talks a little about Persson’s offensive ability:

Smooth skating offensively-minded forward. Needs to round out the rest of his game to earn opportunities to let his offence shine but possesses legitimate upside as a scoring threat at the NHL level.

Over at FC Hockey, Fredrik Haak explains what he likes about Persson’s game:

Persson is a slippery and very explosive winger that outskates most players over short distances. He goes from stationary to full-out really quick and takes advantage of that when he challenges opponents. When Persson has the puck, he is effective and often makes things happen and he could break the normal pattern. It could be anything from the easy and obvious pass but also the unpredictable that opens up things, which is something he uses from the right circle in a man advantage. Persson covers the puck well in tight areas and often takes himself into scoring chances. Persson is a weapon in the offensive zone with his smooth puckhandling and a good vision. He also has a quick, hard wrist shot that he likes to use. Without the puck, Persson does not rest. He plays both ways and works hard. To be even more effective, I would like Persson to be more straightforward and go for more shots. He has the potential to score more, but he could from time-to-time play more direct.

Over at FCHockey, Viktor Bergman describes Persson’s release and strengths:

Persson’s release is quiet and quick, especially his wrister which he also can release with good power and accuracy. His strengths is in his offensive game, but I would like to see more improvement in his defensive game based on what I saw today. I want to see movement and activeness in his own zone all the time, not only at some parts of the game. He tends to be passive, standing still and puck watching when defending. I would like to see him being more aggressive and active, but also using more shoulder checks to know what is happening around him. With his skating, elusiveness and skillset, I believe that Persson has the potential to be a top-six player at NHL level. As of today, I could see him go early in the second round. But he has first round potential.

With all signs pointing to a bright future, this is yet another player in the second round who could potentially claim “steal status” in the coming years. As we talked about before, the 2022 class is loaded with talent from the first round all the way to the middle rounds. As with every draft, there are a number of players who will go unnoticed. If Persson is available at the 59th mark for the Flames, it would be a big mistake not to select him, in my opinion.

As a 15-year-old in the U16 Elit league in Sweden, Persson dominated amongst his peers registering 42 points in 16 games, which included 20 goals. That same year, he was promoted to the J18 league where he suited up for nine games and registered seven points in that span. It was evident at a young age that Persson had explosive offensive capabilities. Over the next couple of seasons, Person would continue to dominate the Swedish junior scene. Then, in 2019-20 he suited up in the Swedish Hockey League (SHL) as a 16-year-old, quite an accomplishment. Last year he presented Sweden at the IIHF Under-18 World Junior Championships helping the Swedes capture a Bronze medal. Persson had four points in seven games.
This past season, he primarily played in the J20 Nationell and was second in league scoring, registering 25 goals, and 36 assists in 41 games. It’s clear that Persson can find a way to put pucks in the back of the net, but there are some concerns reflecting his defensive play and position, however, those are bad habits that can be worked on through development.

Persson would be a solid third-line guy for the Flames. Of course with his offensive potential, there’s hope he pans out into a legitimate top-6 forward at the NHL level. But, he’s already shown what he is capable of at various different levels of competition. He’s elusive, he’s got great hockey IQ, a terrific NHL calibre shot, and he’s got what it takes to succeed. Let’s take a glance at where he lands on various rankings:
Elite Prospects – 79th
FC Hockey – 88th
McKeen’s Hockey – 88th
TSN (Craig Button) – 53rd
The Athletic (Scott Wheeler) – 49th
The Athletic (Corey Pronman): 104th
Dobber Prospects – 40th
Smaht Scouting – 69th
NHL Central Scouting – 46th (International skaters)