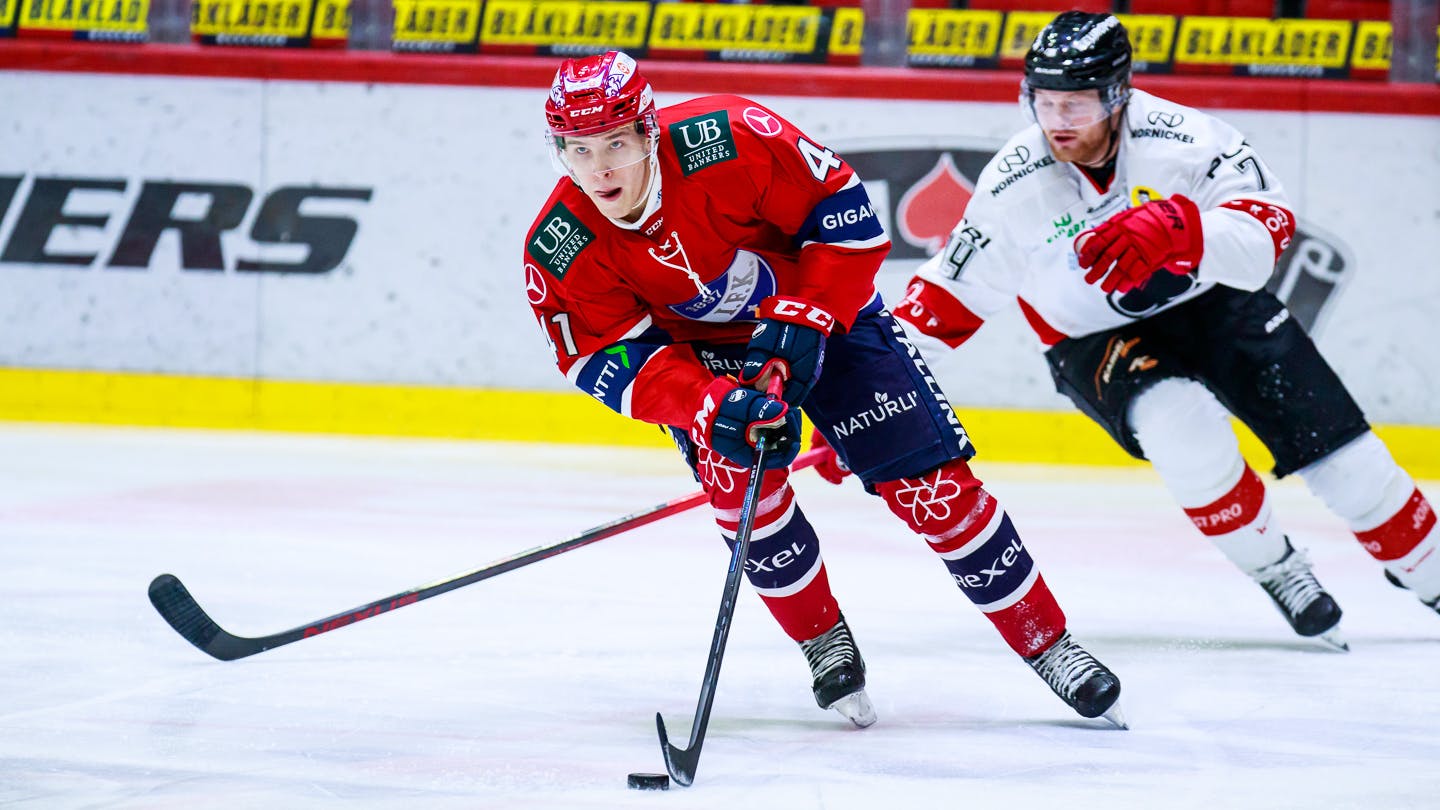 By Ryan Pike
7 months ago
The Calgary Flames need blueliners in their system. When they get called to select at 59th overall in the 2022 NHL Draft, they may very well draft a defenceman.
Finnish blueliner Otto Salin looks like a pretty big gamble, but if he pays off the Flames could look really smart. If he doesn’t, it could be very much the opposite.

A product of Helinski, Finland, Salin is a right shot defenceman playing in Finland. He’s listed by the NHL’s Central Scouting service at 5’11” and 205 pounds.
Salin originally came up through Jokerit’s system, usually playing in leagues well above his age group. He was in Finland’s under-16 league as a 14-year-old, then their under-18 league as a 15-year-old. Salin moved into HIFK’s organization in 2020-21 as a 16-year-old and made the jump from Finland’s top under-20 league.
His 2021-22 season was very weird, featuring his debut in pro hockey, two major international tournaments, two injuries, and a bout with COVID. He played in the Hlinka Gretzky Cup in August, played two junior games, then made his Liiga debut in late September. He suffered an injury – either in the game or afterwards – and was out until mid-December.
He played in two junior games and four pro games in late December and early January, then missed three weeks, then played another pro game in late January. He played seven junior games scattered between February and March, then spent April at the Under-18 Worlds where Finland captured bronze.
He played 17 league games over the entire season, and never played more than a handful of games at any level before getting injured, sick, or moving to another team.
Hadi Kalakeche of Dobber Prospects likes Salin’s potential, but cautioned about his defensive challenges:

Vision, puck skills and mobility are the name of the game for Salin. His crossover use, his cutbacks, his forwards and backwards skating, all look very solid. He covers lots of ground and doesn’t waste energy, being selective in his rushes up-ice. When he joins the offense, whether in transition or in the offensive zone, he takes calculated risks and has the vision required to identify the right time and place for his incursions, although his manipulation of lanes could use some work. When he finds himself in positive ice, he has the hands, the passing ability and the shot to convert on his chances. The issues with Salin are on the defensive side, for the most part — he can struggle to stifle opponents off the rush, and can get confused when the cycle requires a change of assignment. All in all, the offensive promise with Salin is a the shot in the third round, especially if he can be brought over to North America soon to learn from the tightness of the pro game on this side of the pond in order to grow his defensive game the right way.

Writing in February, Dobber scout Eetu Siltanen elaborated about Salin’s challenges in his scouting notes from a recent game:

Even though Salin was very good offensively, his defensive game didn’t really convince me. He didn’t control the gap very well off the rush and despite having a solid frame, he isn’t very strong. He did throw a couple of hits but other than that, his physical play wasn’t great, and he took a tripping penalty after losing a puck battle. There was one really bad mistake as his breakout pass was intercepted, and the opponent scored from the turnover. However, overall Salin’s showing was positive and as I mentioned, his offensive impact was very good.

Heck, Neutral Zone scout Marco Bombino noted some of Salin’s strengths and weaknesses during the Liiga pre-season in August 2021:

He is an offensive-minded defenseman and there was seldom a panic point in his game, as he stayed calm under pressure and made good, accurate passes on the breakout. He will need to continue to work on his defensive reliability, but he is a very skilled player and has natural offensive instincts. If Salin continues to play this way during the preseason, I believe he will get chances to play more games with the Liiga team later this year.

In short: Salin has a ton of potential based on his offensive talents, but his defensive challenges will necessarily make him a bit of a project. He feels kind of like a Finnish Oliver Kylington in this respect: if your team thinks they can fix his play away from the puck, his play with the puck might make them consider taking him.

Because Salin was hurt on and off for big chunks of the season, he doesn’t compare especially well with his peer group in either the Liiga or SM-sarja, the junior league. But he was one of three draft eligible blueliners to play in the Liiga, and one of just 11 under-18 players in the league at any position.
He had one point in six Liiga games and 12 points in 11 SM-sarja games.

In terms of fit for the Flames, Salin is a right shot blueliner with immense offensive upside. Man, the Flames sure could use that in their system. His defensive game has some holes in it, but again, the Flames seemed to do a decent enough job with their developmental group rounding Kylington into form.
Salin’s placement on the major draft rankings varies quite a bit, but the general consensus from the rankers is that he should be available when the Flames select at 59th overall.
Daily Faceoff: 88th
Elite Prospects: 98th
FC Hockey: 66th
TSN (Bob McKenzie): honourable mention
The Athletic (Scott Wheeler): 75th
The Athletic (Corey Pronman): 117th
McKeen’s Hockey: 67th
Central Scouting: 23rd (International skaters)
Draft Prospects Hockey: 63rd
Puck Authority: 65th
He’ll probably be available at 59th overall. His offensive ceiling is pretty high. But his defensive challenges make him a bit of a game, as well as his relative lack of sample size in his draft year compared to the rest of his peer group – is 17 league games in his draft year enough to make the Flames’ scouts comfortable with taking a gamble on him?
Salin is a potential home run swing of a pick. Either you hit on him and look smart as heck. Or you miss on him, and look quite the opposite.