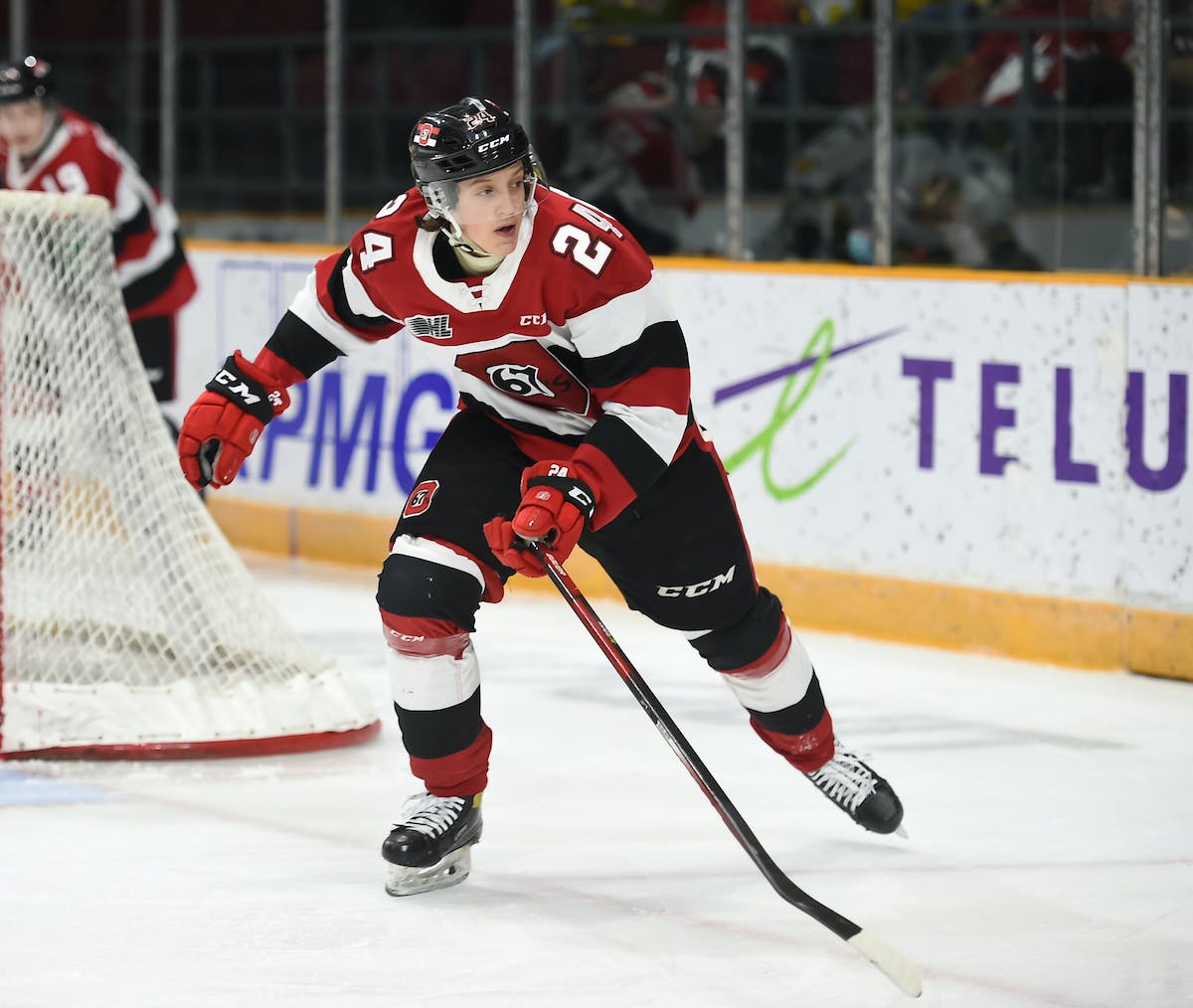 By Ryan Pike
7 months ago
As we inch towards the 2022 NHL Draft, we’re previewing several players that the Calgary Flames could be interested in selecting with their second round pick (59th overall). Next up on that list is Ottawa 67’s winger Vinzenz Rohrer, an Austrian import who impressed in his first season in North America.

A product of scenic Feldkirch, Austria – the same town as Minnesota Wild prospect Marco Rossi – Rohrer is a right shot winger who’s listed at 5’10” and 167 pounds by the NHL’s Central Scouting service. He came up through local minor hockey, then moved to neighbouring Switzerland as a teen as he worked his way up through high-level hockey in the Zurich area.
He was selected by the Ottawa 67’s in the 2021 CHL Import Draft and made his North American debut in 2021-22.
Rohrer’s performances earned him a few positive reviews from the OHL scouting community.
Dobber Prospects’ Kyle Watson praised Rohrer, thought he referred to him as a project:

Rohrer plays a responsible two-way game. Despite a lack of size, he fights hard for pucks and never stops skating. He is able to consistently make good passes and generate quality scoring chances but struggles to attack the slot against bigger and better competition. He does show flashes of high-end puck skills but does not consistently use them to drive offence.

Maybe the most impressive piece of Rohrer’s game is his crossover skating and the way he cuts and slices up coverage (as Boyd alluded to, and as was evident at the combine in Kitchener).
His weaving skating patterns combined with his ability to hang onto the puck made him a ton of fun to watch at four-on-four and three-on-three this season.

Some scouts were critical of his first step, but also noted that would probably improve as he matures and gets stronger.
Brock Otten of OHL Prospects provided a handy summary of Rohrer’s game:

Whether the 67’s are down a goal or up one, Dave Cameron has him on the ice at the end of a game. His four way mobility and agility are standout qualities. He is very confident and balanced on his edges, with or without the puck. His linear quickness could stand to improve still given his average size (his stride mechanics are inconsistent), and this limits his effectiveness in transition at times. However, I love how he alters pace and alters the plane he plays through to make him an unpredictable cover. The hands are smooth and quick, even through pivots and tight quarters. I’m not extremely confident that he’s more than a high end third liner, however if his shot, scoring instincts, and skating continue to improve, he could be a complementary scoring line player.

Simply put: Rohrer’s not a perfect player, but he’s quite good.

Rohrer had 25 goals and 23 assists in 64 games for the 67’s in 2021-22. He led the 67’s in scoring overall, though teammate Jack Beck (a Flames prospect) was four points behind him and had a way higher points per game.
Among OHL rookies, Rohrer was 11th in points – this year’s rookie crop is basically a double crop because the league didn’t play any games in 2020-21 due to the pandemic. He was tied for 23rd among rookies in even strength points with 30, well behind Sudbury’s David Goyette, who had 48.
In short: Rohrer was pretty decent, with an even strength point every two games or so.

In terms of fit, Rohrer feels pretty Flamesy, as he’s an offensive-minded right shot forward who plays with pace. He plays in the OHL, where the Flames have had a lot of recent drafting success – looking at you, Andrew Mangiapane, Rasmus Andersson, Matthew Tkachuk and Adam Ruzicka. Rohrer is teammates with 2021 pick Jack Beck, so the Flames probably know him well. And assistant director of scouting Fred Parker was previously the OHL area scout, a seeming admission by the Flames that they think their OHL scouting was (and is) pretty solid.
In terms of availability, it seems probable based on the various draft rankings available that Rohrer will still be on the board when 59th overall comes around:
Daily Faceoff: 87th
Elite Prospects: 59th
FC Hockey: 61st
TSN (Bob McKenzie): 80th
The Athletic (Scott Wheeler): 62nd
The Athletic (Corey Pronman): 94th
McKeen’s Hockey: 78th
Dobber Prospects: 60th
Draft Prospects Hockey: 77th
Smaht Scouting: 126th
NHL Central Scouting (North American skaters): 42nd
Would he be the best pick available? That can be argued, but he’s good and would probably be available when the Flames select.