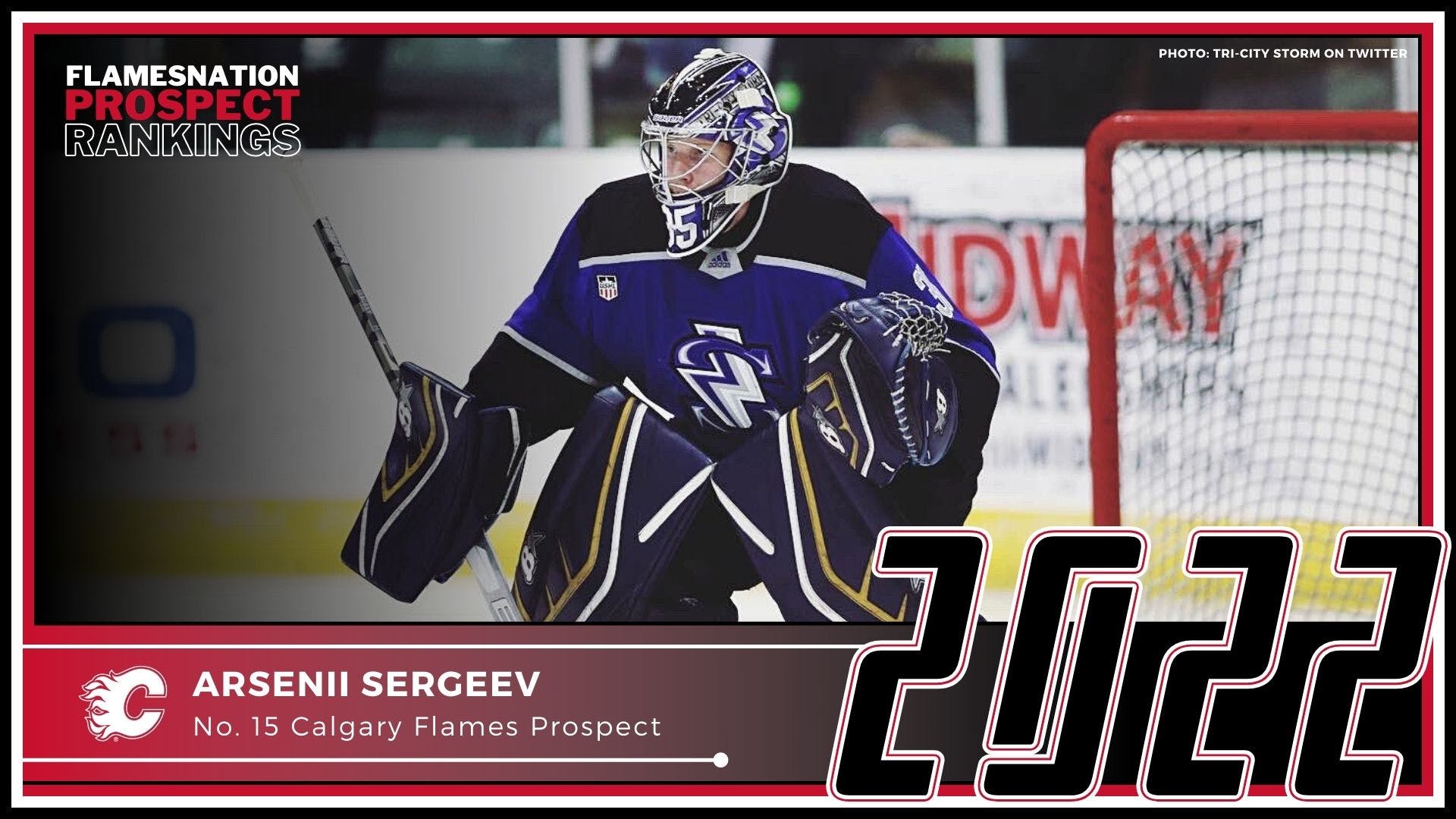 By Ryan Pike
5 months ago
Friends, when it comes to the draft, everything is a bit of a gamble. Doubly so for goaltenders. In the final round of the 2021 NHL Draft, the Calgary Flames rolled the dice on a promising young Russian goaltender playing in Louisiana.
A year later, Arsenii Sergeev is quietly becoming one of the most intriguing prospects in the Flames’ system.
Arsenii Sergeev
Left-catching goaltender
Born Dec. 16, 2002 (19 years old) in Yaroslavl, Russia
6’3”, 192 pounds
Seventh round selection (205th overall) by CGY in 2021 NHL Draft
A product of Yaroslavl, Russia, Sergeev played much of his youth hockey throughout western Russia, including playing for high-level teams in Dmitrov in his 15 and 16-year-old seasons. He dipped his toe into really high-end hockey in 2018-19, as a 16-year-old, going 2-10-2 in 14 appearances with Golden Dogs Dmitrov in the NMHL, Russia’s top under-18 league.
Sergeev’s time in the NMHL were, as of this writing, his final appearances in Russian hockey. He opted to head across the Atlantic Ocean, moving to the United States before his 17th birthday to play prep league hockey in 2019-20. He bounced around a bunch that season, playing in the USHL, the NAHL and the NCDC. He lacked a consistent team, a consistent role, and his numbers eroded as he rose to higher levels of hockey – he posted a .926 save percentage in the NCDC, but just an .811 in the USHL that season.
Landing in the hockey hotbed of Shreveport, Louisiana in 2020-21 – with the NAHL’s Mudbugs – Sergeev found stability, worked on his consistency, and quietly became a really strong netminder. In 20 games for Shreveport, he posted 14 wins, two shutouts, a .936 save percentage and a 2.17 goals against average. He served as backup to Cole Hudson, and the duo led the team to a Robertson Cup title in the playoffs.
While Sergeev had strong numbers in net during his draft year, there were caveats. He was a backup. He was (and still is) Russian. And the NAHL doesn’t have the reputation for high-end offensive talent that the USHL does. These factors contributed to the Flames selecting Sergeev in the seventh round of the 2021 NHL Draft.
Sergeev returned to the USHL in 2021-22, landing with the Tri-City Storm. In short: he was excellent. Initially playing in tandem with Washington prospect Chase Clark, Sergeev had such a hot start that he became the undisputed starter (and Clark was eventually traded). Sergeev led the USHL in every major goaltending category and was named the USHL’s top goaltender for the season.
The only real blemishes on his record were a couple of suspensions – one for punching a player who crashed the net, another for making contact with an official while disputing a goal call – and a playoff upset.
Smaht Scouting’s Paul Zuk provided this rundown of Sergeev’s game:

Much like his Tri-City teammate Ilya Nikolaev, Flames goalie prospect Arsenii Sergeev had struggled to find much consistency in his overall game since coming to North America as a 16-year-old for the 2019-20 season. But after a strong campaign for the Shreveport Mudbugs in the NAHL in 20/21, Sergeyev continued his stellar performances for the Storm in 21/22. It might take a little while for Flames’ fans to see Sergeev in the C of Red, as he’s off to the University of Connecticut in the fall, but he seems to have found his groove on North American ice.
Sergeev’s game has made some impressive improvements since being selected 205th overall by Calgary in the 2021 NHL Entry Draft. He possesses a fairly versatile toolkit, and plays with a calm demeanor, definitely a trait you’d look for in a goaltender. Once Sergeev finds his groove, he’s able to ride some impressive streaks. His strong play this season left him with an impressive stat line, as he recorded a 30-6-2 record, with a .918 save percentage and 2.08 goals against average. Sergeev also recorded six regular season shutouts. He also earned USHL Goaltender of the Year and USHL 1st team all-star honours. Sergeev’s playoff performance was up and down, but he still managed to register decent numbers.
Sergeev’s overall development still has some room for improvement, but the effort and willingness to compete and get better every day are noticeable. There’s zero pressure on him to rush things, so he’ll be looking to continue his back-to-back impressive seasons at UConn once October rolls around.

As Zuk mentioned, Sergeev is off to college! He’ll be joining the ranks of the University of Connecticut Huskies for the upcoming season. He wasn’t at Flames development camp because he was already at school taking classes, a sign that he’s committed to a smooth transition (on and off the ice) to his new adventure.
Sergeev is a project, especially as a college-bound Russian goalie. But he has the benefit of playing in an organization that has an established NHL incumbent in Jacob Markstrom and a strong AHL starter in Dustin Wolf. The Flames don’t need to rush him, and they won’t likely feel any pressure to do so. And because the Flames aren’t pressured, hopefully Sergeev will be able to relax, adapt, and make a smooth transition to college.
Sergeev is young, promising goaltender. And he’ll be given the benefit of time to develop. We’ll see what he does with it.