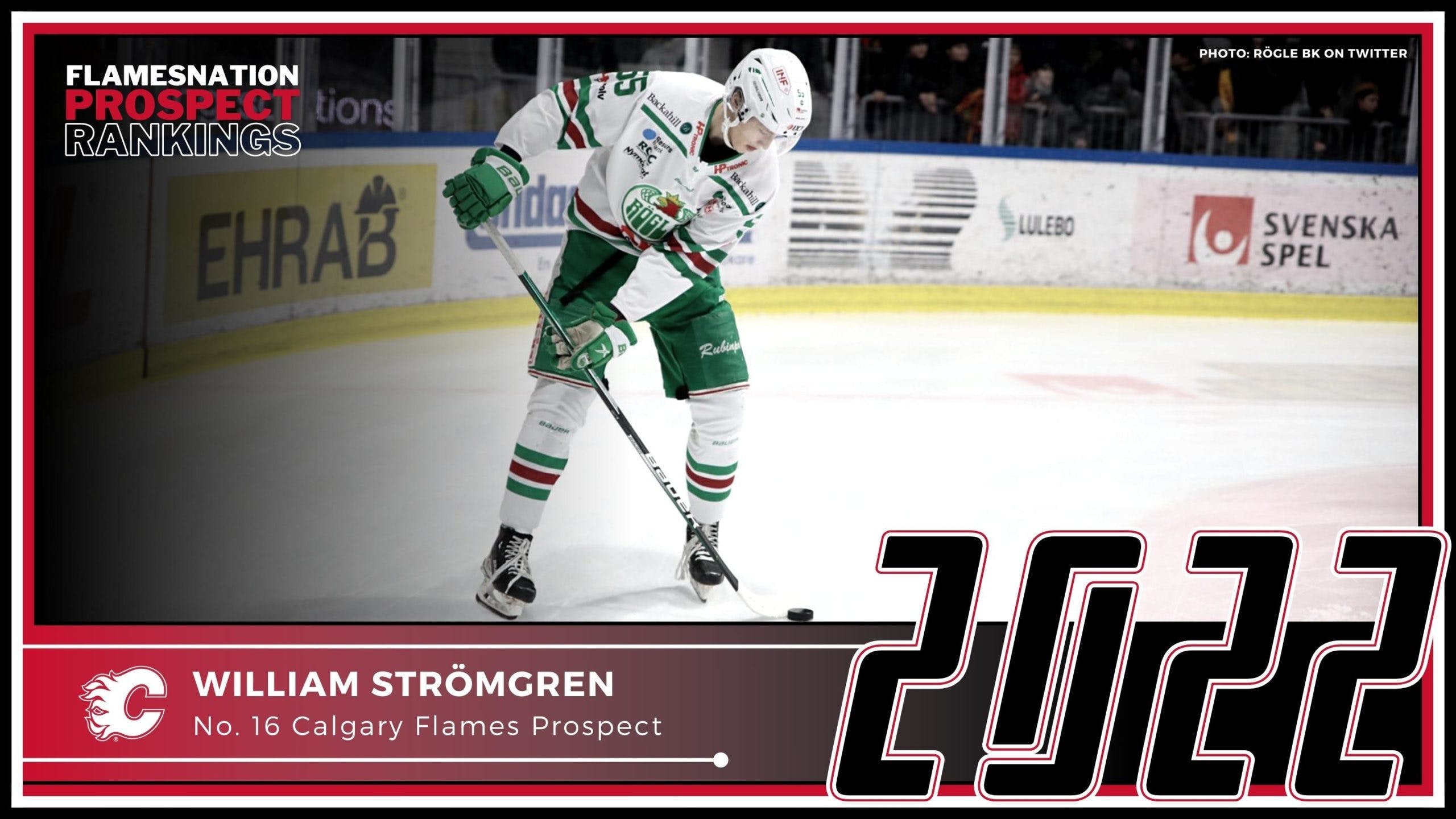 By Ryan Pike
5 months ago
When it comes to drafting and development, every organization has their philosophies and comfort zone. The Calgary Flames have embraced a philosophy of diversity: they like to take different types of players from different parts of the hockey world, in an approach that at times insulates them from organizational risk.
A tall, toolsy forward from Sweden, William Strömgren is a project pick who’s drawn unfavourable comparisons from some fans because of who he isn’t. He’s the 16th-ranked prospect on this year’s rankings.
William Strömgren
Left-handed winger
Born Jun. 7, 2003 (19 years old) in Örnsköldsvik, Sweden
6’3”, 176 pounds
Second round selection (45th overall) by CGY in 2021 NHL Draft
Strömgren’s story is fairly typical of well-regarded Swedish prospects. A product of Örnsköldsvik, a locality on the Gulf of Bothnia in northern Sweden, he came up in youth hockey in his hometown area and eventually became part of the famed MODO Hockey organization.
In his draft year, as a 17-year-old, Strömgren made his pro debut with MODO’s pro team in the secondary HockeyAllsvenskan but ended up loaned out to Örnsköldsvik’s club in the third-tier HockeyEttan as well. Looking for a regular role, he made the leap that off-season and joined Rögle BK, effectively leaving his hometown area for the first time and going to essentially the opposite side of Sweden.
He was selected by the Flames in the second round of the 2021 NHL Draft, while WHL star Logan Stankoven by the Dallas Stars two spots later. The pick made some sense given that the Flames had recently gone to the WHL – to Stankoven’s team, in fact – to take Connor Zary in the previous draft, and their seeming desire not to take too many of any one type of player. But from a pure point production perspective, the criticism the Flames received from the pick was probably warranted, and has persisted.
Strömgren’s first season with Rögle was a mixed bag. He played the majority of the season with their junior club in the J20 Nationell league, where he had 36 points in 44 games. He wasn’t the focal point of his junior team’s attack, either, and fell off of the national junior team’s radar during the season. He played just six SHL games and two Champions League games with the senior club, with zero SHL points and three Champions League points (albeit in a game where Rögle trounced their over-matched opposition).
Jimmy Hamrin, of Hockeysverige.se and Elite Prospects, had this assessment of Strömgren’s campaign:

He had a tough season. He lost his confidence and actually looked regressed as a player at times. He was down in juniors almost the whole year which he probably did not expect.
I get why the Flames picked him though and surely they must have realized that he was a longterm project. He has tools. Size, above average skating and hands. He has will to create but his hockey sense is underdeveloped. He has a hard time understanding tactics and sticking to the team system. He is not skilled enough to compensate that either and he has not found a fit in the senior game.
Hopefully, he will learn a lot from that season and bounce back. Rögle is a good system to develop in. He needs to play more senior-like hockey. If he ever makes the NHL, it will take time.

The hope within the Flames’ development staff is likely that an older, wiser Strömgren will adapt and bounce back in 2022-23. (After all, there is a bit of a learning curve to a joining a brand-new organization and moving to a new city.)

Strömgren is eligible to play with Rögle’s SHL or junior clubs, and where he spends the majority of his time is still up in the air. The organization includes NHL prospects like Calle Clang (Anaheim), Samuel Jonsson (Edmonton), Adam Enström (Montreal), William Wallinder (Detroit), Marco Kasper (Detroit), Theodor Niederbach (Detroit), Daniel Ljungman (Dallas), Oskar Pettersson (Ottawa), Linus Sjödin (Buffalo) and Oliver Tärnström (NY Rangers), in addition to Strömgren. Their men’s team won the Champions League and finished in the final four in the SHL playoffs, while their junior side finished in the final four of the J20 playoffs. It’s a competitive organization.
In such a deep, competitive organization, Strömgren will have to out-perform some of the other players in the junior age group in order to get more opportunities on the SHL squad. You can probably chalk up his uneven 2021-22 season to the growing pains of being in a new situation – a new team, a new city and whatnot. But he’ll need to find an edge and carve out a niche within Rögle’s system if he wants to become a more prominent player for them in 2022-23.
We’ll see if Strömgren can bounce back, or if the comparisons to Stankoven will persist for another year.