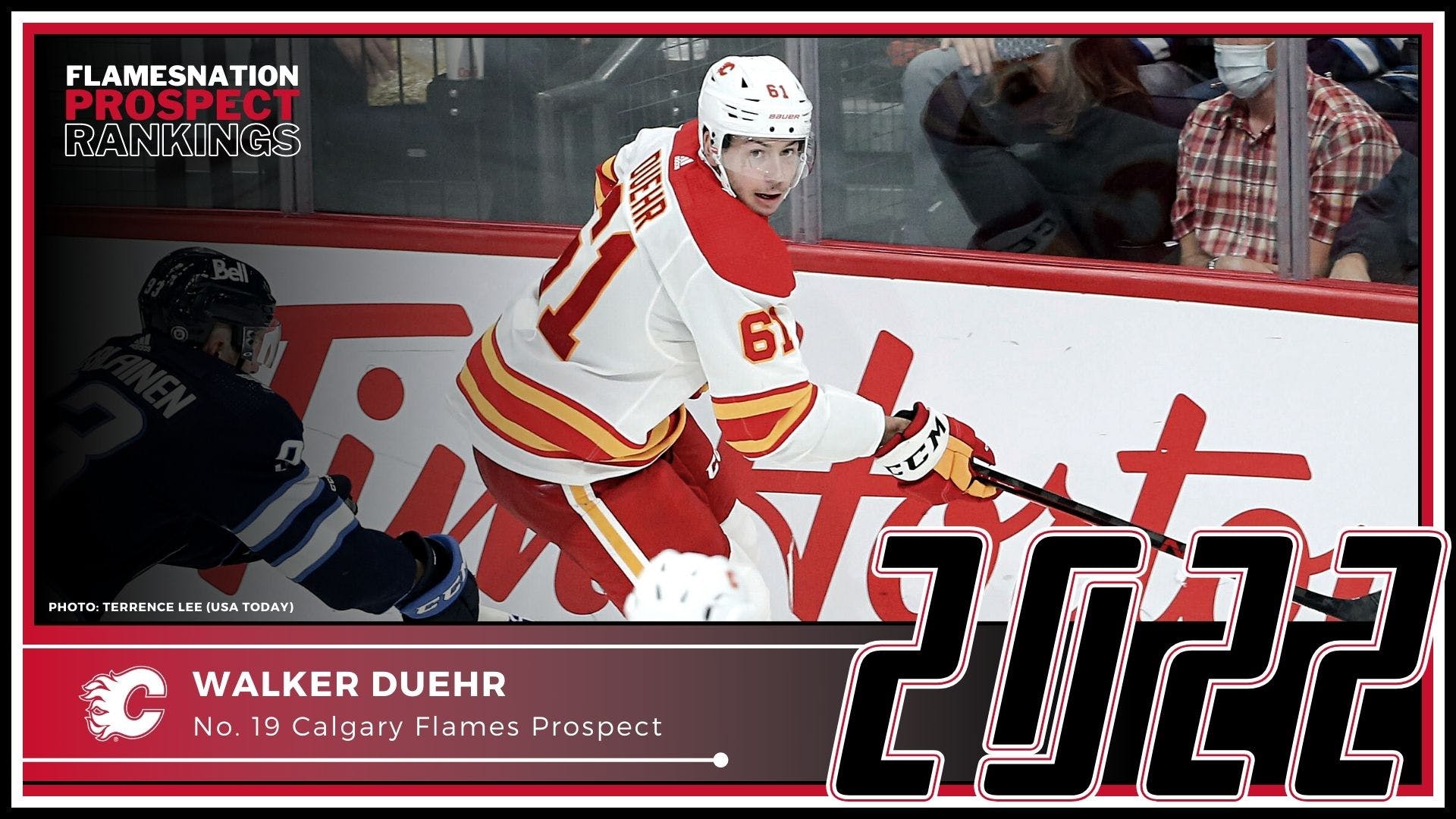 By Paige Siewert
3 months ago
Walker Duehr took two big leaps in his hockey career in the 2021-22 season by firstly becoming a full-time professional in the AHL and secondly, earning his NHL debut. Duehr got a handful of games in with the Stockton Heat in the 2020-21 season but really kicked things into another gear straight out of training camp.
Duehr cracked the FlamesNation top 20 prospect rankings, coming in at number 19.
Walker Duehr
Right-handed winger
Born Nov. 23, 1997 (Age 24) in Sioux Falls, South Dakota
6’2”, 210 pounds
Undrafted, signed by CGY on Apr. 13, 2021
Duehr was one of the later Flames training camp cuts due to his strong pre-season performance. Glenn Gawdin took the depth forward spot on the opening night roster sending Duehr down to the Heat to start the season. He played most of the year with the Stockton Heat to complete his first full professional season in 2021-22.
Here’s what his head coach, Mitch Love, said about his game.

Well he’s got NHL speed, there’s no doubt about that. And now I think for Walker it’s just about consistency and putting it all together, making little plays coming out of your end of the ice and being smart at the bluelines with puck decisions. He’s a guy that’s just so strong and so quick on his edges that he’s got to just learn to manage the puck, manage the game with consistency. But he’s another guy that if you have some growth this next hockey season for us, he’s another guy that could be pushing for some NHL minutes at some point.

An opportunity with the Flames came up in November when Brett Ritchie was out for a few games due to an injury. Gawdin had been in a few games at this point, but the Flames needed something different. It was Duehr’s time to shine and he got the call-up.
He did what all the NHL rookies did and took his pregame lap before taking the ice against the Ottawa Senators on Nov. 14. The night was special for the 23-year-old at the time but also historical on a much larger scale. Walker Duehr made history as the first South Dakota-born player to play in the NHL. He played 8:47 through 14 shifts but did not record a point.
Duehr was not only a solid producer through the regular season with the Heat but also through their playoff run. By the end of the season, Duehr’s spot in the lineup typically involved a line centered by Byron Froese with Alex Gallant on the other wing. Gallant was sometimes replaced by Emilio Pettersen or Duehr would work his way up the depth chart and play on a line with Luke Philp and Martin Pospisil from time to time.
Here’s what FlamesNation Wranglers insider Mike Gould had to say about Duehr:

Walker Duehr can really skate, but he plays a very simple game and is best suited to a bottom-six AHL role. His NHL upside is very limited by his skill with the puck. He can generate breakaways with his footspeed and converts on a decent amount on them, but his in-zone play leaves a lot to be desired. He isn’t a great passer or defensive player. Much like Ben Jones, his ceiling is as a fourth-line NHL forward, but he doesn’t have much of the defensive acumen or the AHL offence.

Duehr finished the regular season with 11 goals and 12 assists for a total of 23 points in 59 games. He averaged a similar type of point per every second game average in the postseason with five goals and a single assist in 13 games. He got the goals going when the team needed it. Some were pretty standard while others, involved him walking through two guys in the offensive zone such as the one below.

Duehr had a year to settle in and achieve some milestones early in his career. In 2022-23, the potential for a breakout season is very achievable. He’s had a taste of what could be if he is able to make the jump to the NHL. Wouldn’t any professional player want to do everything they could to have that opportunity again?
Duehr works hard and if his work ethic has followed him into the off-season, he’s due for another camp that will earn him some second looks by the Flames coaching staff. He might not be ready for a full-time position with the Flames by any means, but he could be an underdog down the depth chart that can be used for call-ups this season.
Duehr fits the mould of what the Flames player profile shaping up to be and if he continues to deliver and stays healthy, his NHL game number may continue to grow and his preseason prospect ranking may land quite a bit higher next year. You won’t have to go far to watch him as he will be joining the Calgary Wranglers (formerly the Stockton Heat) in their inaugural season this fall.