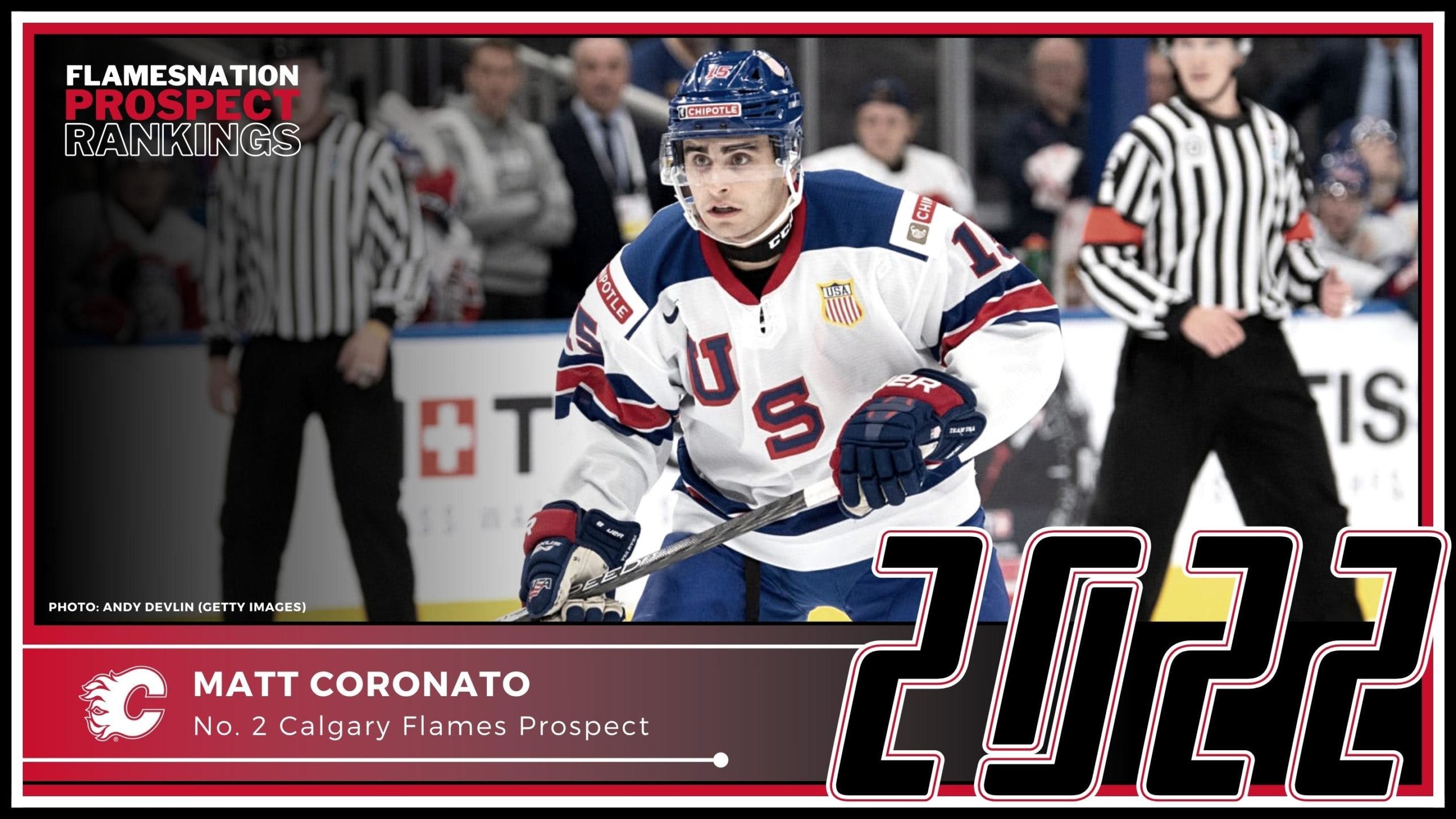 By Ryan Pike
4 months ago
If there’s one thing teams always need, it’s guys that score goals. When the chips are down, hockey clubs yearn for a player who can find a way to tilt the balance of a game. In the 2021 NHL Draft, the Calgary Flames selected one of the top young goal-scorers in his age group when they selected Matt Coronato.
A year and change after that selection, the Flames are eagerly awaiting Coronato’s rise to hockey’s next level.
Matt Coronato
Right-handed winger
Born Nov. 19, 2002 (Age 19) in Huntington, New York
5’10”, 183 pounds
Selected in the first round (13th overall) by CGY in the 2021 NHL Draft
Originally from Long Island, New York, Coronato worked his way through a lot of good leagues and was a consistently strong scorer, eventually landing with the United States Hockey League’s powerhouse Chicago Steel in 2019-20 for his 17-year-old season.
In his rookie year, Coronato had 18 goals and 40 points in 45 games, resulting in being named to the USHL’s All-Rookie Team. The following season he had 48 goals and 85 points in 51 games, leading the USHL in goals and plus/minus and being named a First Team All-Star. Then he had 9 goals and 13 points in 8 playoff games en route to a Clark Cup Championship.
After the Flames selected Coronato at 13th overall, he made the jump to college hockey. His freshman season started out slowly, but he gradually found his rhythm and carved out a niche as a middle-six winger and secondary power play option. He was named to the American World Junior entry for the abandoned December/January tournament. When his Harvard teammates Nick Abruzzese and Sean Farrell headed to the Olympics in February, Coronato was forced into a larger role. He thrived in that role, and from February until the end of the season he was arguably Harvard’s top player.
Coronato ended his freshman season with 18 goals and 36 points in 34 games. He was excellent in the conference’s playoffs, leading the Crimson to a conference title and an NCAA national tournament berth. He was named playoff MVP and landed on the ECAC’s All-Rookie Team. He made the American entry for the August World Juniors and was arguably his team’s top forward, scoring 4 goals and 7 points in 5 games.
Josh Tessler over at Smaht Scouting provided some thoughts on Coronato’s first college season:

Matthew Coronato had an excellent freshman campaign in which he was a point-per-game player for Harvard. The move from the USHL to NCAA hockey went along swimmingly and he transitioned well to the next level. Coronato continued to show he strong he is at getting to the dirty areas of the offensive zone to key up passing lanes for his teammates to exploit. Gets into position down low regularly to attempt back door shots on net. But, in situations in which he is stuck in low danger and the puck is on his stick blade he was able to snipe top shelf goals with ease. His range is quite good, but his puck manipulation makes his shots hard to defend against. When facing pressure, Coronato will position the puck wide as if he intends to shoot and that forces the defender to slide or skate towards that lane. Once the attacker slides or goes to the lane, Coronato then drags the puck to the opposite side around the defender and shoots immediately. I’ve also enjoyed seeing Coronato using puck manipulation in the defensive zone to open up space for himself to complete a stretch zone exit pass to an open teammate in the neutral zone. When on the rush and skating parallel to the slot, he can complete backhand feeds through tight lanes to his teammates in the slot. In addition, his forechecking has come along quite nicely and the activation off of his edges allow him to stay in toe with the opposition puck carrier. Coronato has shown at the NCAA level that he can be an effective top six contributor and won’t be long before he is one at the NHL level. After another season in the NCAA, he should ready for the NHL. So, it’s entirely possible that he gets a cup of coffee for the Flames down the stretch.

When the Flames drafted Coronato, he was coming off a stretch where he was probably the best pure goal-scorer in the USHL. The hope was that he could round out his game playing for Ted Donato’s team at Harvard. Twelve months later, that seems to be what happened. After learning the fundamentals of college hockey early on, he grabbed hold of a bigger role and was great for the Crimson at clutch time.
Coronato was one of the top players in all of college hockey in his age group, and was one of the top players regardless of age for the final two or three months of the season. He’s the main reason Harvard was able to force their way into the national championship tournament. If he can be one of the top players in college hockey for the duration of his sophomore season, there may not be much more for him to learn in the NCAA.
There’s a non-trivial chance that, unless Coronato’s game seriously regresses this season, we could see him wearing a Flames jersey sometime in the spring.