A brief history of the Flames drafting goalies 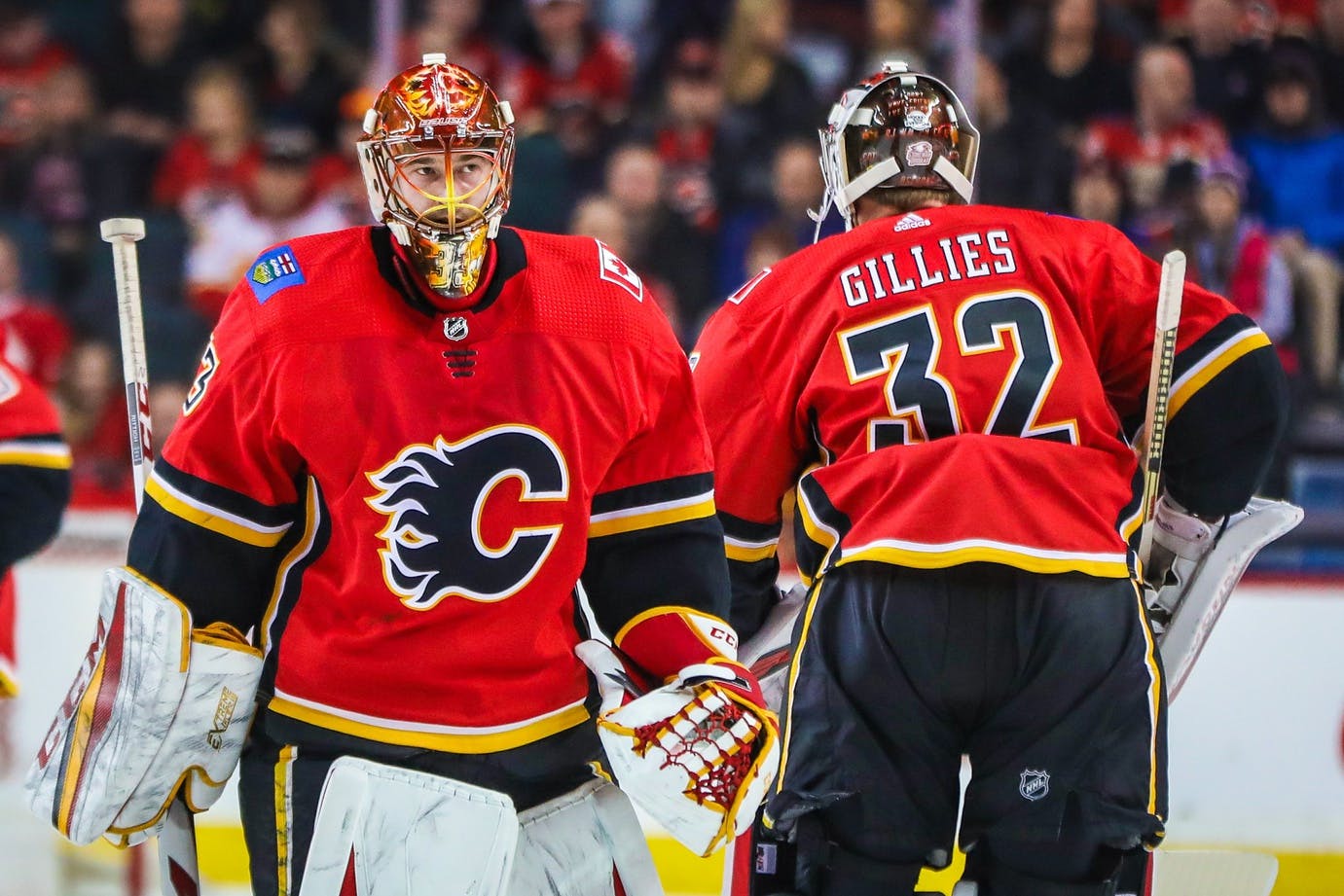 By Ryan Pike
1 year ago
If you’ve read FlamesNation since its inception, you’re undoubtedly familiar with one simple drafting philosophy our staff has trumpeted for over a decade: never take goalies early. It’s nothing against the goalies expected to go early in each year’s draft – we’re pretty sure that Jesper Wallstedt and Sebastian Cossa are fine prospects and will be fine goaltenders.
It’s just that the Flames franchise, whether based in Atlanta or Calgary, have historically been quite bad at converting goalies from draft picks into NHL players. Here’s a brief history of the goalies the Flames have selected, from Blum to Chechelev.

Frank Blum [82nd overall, 1972]
Blum spent two seasons in the WHA, another in the IHL, then retired around 1975.
Bill Moen [100th overall, 1974]
Moen never went pro, leaving hockey after college.
Nick Sanza [150th overall, 1975]
A great junior goalie, Sanza bounced around minor pro for a couple seasons, then played a year in Canadian university, then went to Italy. He retired in 1992 having spent zero games in the Flames’ system.
Brian O’Connell [167th overall, 1975]
O’Connell retired in 1980 after two pro seasons and zero spent in the Flames’ system.
Mark Earp [82nd overall, 1976]
Earp played one year of pro for the excellently-named Toledo Goaldiggers of the IHL, then retired.
Jim Craig [72nd overall, 1977]
Craig was the first Flames-drafted goalie to play NHL games, suiting up for four dates for Atlanta in 1979-80. He’s better known as the star goalie for USA Hockey’s famed Miracle on Ice team that won gold at the 1980 Olympics. He retired in 1984 after playing just 30 NHL games (for Atlanta, Boston and Minnesota), but he had a tremendous amateur career.
Tim Bernhardt [47th overall, 1978]
Bernhardt was a strong minor league goalie, starring at times in the CHL and AHL. Unfortunately, he couldn’t find his footing at the NHL level. He played six games for the Flames and 61 for Toronto.
Bernhard Englbrecht [196th overall, 1978]
Englbrecht never left Germany, playing his entire career without leaving his home country. He got to play in two Olympics, too. (He retired in 2000 and is still coaching!)
Pat Riggin [33rd overall, 1979]
Riggin carved out a respectable NHL career, playing 350 games over nine seasons for Atlanta/Calgary, Washington, Boston and Pittsburgh. He won a Jennings Trophy with the Capitals in 1983-84.
Mike Vernon [56th overall, 1981]
Vernon had the best run of any Flames-drafted netminder. He had an excellent junior resume and completely delivered on his promise, winning two Stanley Cups, a Jennings Trophy and a Conn Smythe Trophy. He played 781 NHL games with the Flames, Detroit, San Jose and Florida, and had his jersey retired by the Flames, too.
Dave Meszaros [65th overall, 1982]
Meszaros spent a couple seasons in the Flames’ system, but retired from hockey after the 1986-87 season.
Grant Blair [111th overall, 1983]
Blair spent a couple seasons in the Flames’ system, but retired from hockey after the 1987-88 season.
Jeff Hogg [131st overall, 1983]
Hogg never went pro, leaving hockey after his 1984-85 (junior) season.
Scott Sharples [184th overall, 1985]
The good news is Sharples made the NHL! The bad news is he just played a single game (in 1991-92). He played just three full seasons of pro after finishing college, eventually leaving hockey in 1993.
Jason Muzzatti [21st overall, 1988]
“Maybe don’t take a goalie in the first round,” exhibit A. A strong college goalie, Muzzatti couldn’t get a foothold in the NHL. He played 62 games for the Flames, Hartford, San Jose and NY Rangers, but he spent most of his playing days in Europe. He eventually received Italian citizenship and played for Italy at the 2006 Olympics.
Trevor Kidd [11th overall, 1990]
On one hand, Kidd was a pretty decent NHL goalie. In addition to having amazing dragon-themed masks, he played 387 games for the Flames, Carolina, Florida and Toronto. He also captured a silver medal with Canada at the 1992 Olympics. But the Flames swapped picks with New Jersey in 1990 to move up to grab Kidd, while the Devils settled for Martin Brodeur with their selection. Kidd was a solid selection, but Brodeur was obviously a much more successful pick.
Shawn Murray [167th overall, 1990]
Murray didn’t go pro, leaving hockey after his senior year of college.

Jerome Butler [107th overall, 1991]
Butler played parts of two pro seasons after college, leaving hockey in 1996.
Andrei Trefilov [261st overall, 1991]
Trefilov became a cult favourite among long-time Flames fans. He was always a fringe goalie and only played 47 NHL games, spread between the Flames, Buffalo and Chicago. He was a frequent injury replacement, including playing with the Flames briefly during the year of seven goalies. He also won Olympic medals in 1992 (gold) and 1998 (silver). He retired in 2006 after spending several seasons in Germany.
Patrik Haltia [149th overall, 1994]
Haltia played primarily in Sweden for his entire career. He came over to Saint John in 1996-97, played three games and then went home.

Brent Krahn [9th overall, 2000]
“Maybe don’t take a goalie in the first round,” exhibit B. A star with the Calgary Hitmen, Krahn was drafted by the Flames in the draft they hosted. But the fairy-tale story ended there, as Krahn dealt with injuries and consistency challenges during his time with the Flames. (He had stretches of great play, but then would get derailed.) He played one period for Dallas in 2008-09 and retired in 2011.
Levente Szuper [116th overall, 2000]
A standout with the Ottawa 67’s, this Hungarian import played four seasons of North American pro (including dressing a few times as Flames backup) before heading back to Europe. He retired in 2013.
Andrei Medvedev [56th overall, 2001]
Listed as 6’1″ and 249 pounds, Medvedev never ended up coming to play in North America. He retired in 2005. Urban legends abound that his portly stature led to him not being insurable in North American pro, but we’ve never found anything to corroborate those claims.
Curtis McElhinney [176th overall, 2002]
Affectionately known as McBackup, McElhinney was a rock-solid depth piece for the Flames and eventually carved out a niche for himself as a true backup goaltender across the NHL. To date, he’s played 249 games between the Flames, Anaheim, Ottawa, Phoenix, Columbus, Toronto, Carolina and Tampa Bay. He won a Cup as Tampa’s backup in 2020.

James Spratt [213th overall, 2004]
Spratt never signed after college and bounced around minor pro for a few years. He retired in 2013.
Kevin Lalande [128th overall, 2005]
Lalande played three seasons of North American pro, including two in the Flames system, before heading to Europe. He played extensively in Belarus before retiring in 2017.
Matt Keetley [158th overall, 2005]
A standout in the WHL, Keetley played four seasons in the Flames system – including playing one game in relief in 2007-08. But he failed to gain a foothold and ended up bouncing around minor pro after that. He retired in 2013.
Leland Irving [26th overall, 2006]
“Maybe don’t take a goalie in the first round,” exhibit C. Irving was a super junior with Everett and made the World Junior team in 2007 that won gold. He was a good AHLer and worked his way into 13 games for the Flames. But he couldn’t solidify himself in the Flames’ plans and has ended up bouncing around minor pro and Europe ever since. He’s currently playing in Austria.
Joni Ortio [171st overall, 2009]
Ortio played parts of four seasons in North America, all with the Flames organization. He played 37 games for the NHL team but when it became clear he wasn’t their favoured long-term solution in net, he headed back to Europe. He’s currently playing in Kazakhstan.

Laurent Brossoit [164th overall, 2011]
A really solid WHL goalie, Brossoit was sent to Edmonton in the Ladislav Smid trade. He’s carved out a nice little niche for himself as a reliable backup goalie, first in Edmonton and now in Winnipeg.
Jon Gillies [75th overall, 2012]
A standout college goalie, Gillies was out-battled by David Rittich in the farm system and was hampered by hip troubles during his time with the Flames. He played 12 games with the Flames and has since moved on to the St. Louis system.

Mason McDonald [34th overall, 2014]
McDonald never became much in the Flames system, and the fact that Thatcher Demko was selected soon after him by Vancouver and has become a good NHL goalie probably twists the knife a little bit. McDonald didn’t play pro hockey in 2020-21.
Tyler Parsons [54th overall, 2016]
A standout junior goalie with a Memorial Cup and a World Junior gold medal on his resume, Parsons has been hamstrung by horrible injury luck since going pro in 2017. He’s still part of the Flames organization.
Dustin Wolf [214th overall, 2019]
After an excellent career in the WHL, Wolf is set to go pro full-time in 2021-22.
Daniil Chechelev [96th overall, 2020]
Chechelev bounced around various levels of Vityaz Podolsk’s organization in 2020-21 and is currently weighing various options for next season in Europe. He’s an interesting goalie, but probably more of a long-term project than Wolf.
Uncategorized
Recent articles from Ryan Pike