Beyond the Boxscore: Calgary Flames bully the injured Flyers 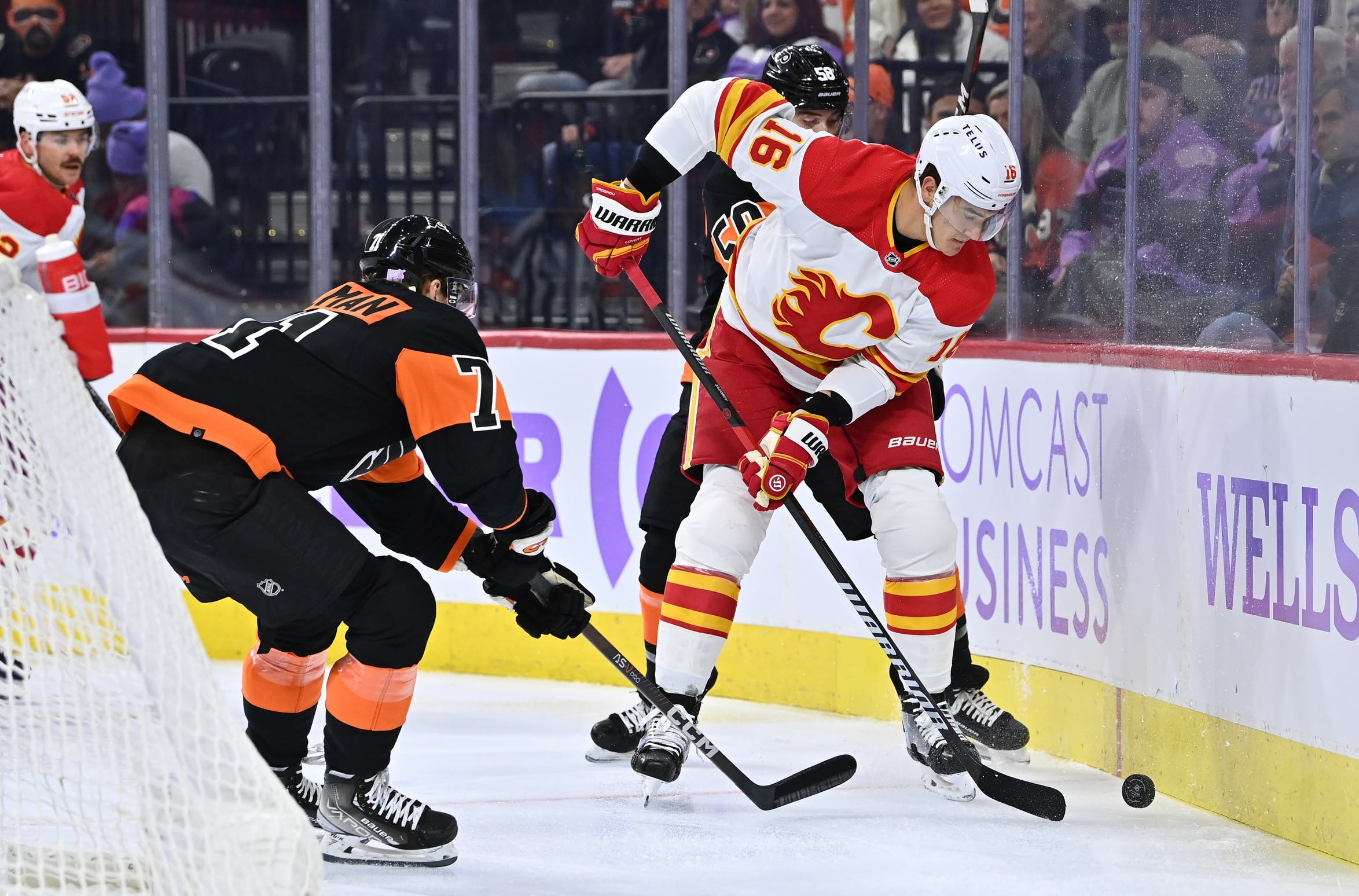 By Shane Stevenson
2 hours ago
Credit to the Calgary Flames for facing an opponent missing six of their regular forwards and not finding a way to lose. They made it scary for fans with that terrible second goal against but ultimately found a way to close it out. Normally I look at empty net goals and say “the game was much closer” instead this time it feels like it properly reflects what should have happened. Without Carter Hart this game is more than likely a blowout for Calgary.
CF% – 63.69%, SCF% – 61.36%, HDCF% – 55.72%, xGF% – 73.09%
It’s a Team Game – Say what you will about John Tortorella but his teams tend to defend the slot well. All of Calgary’s early dangerous chances had to come off the rush – unlucky for them Huberdeau and Dubé made their limited chances count. Calgary only won the high danger chance battle when they needed to – in the third period. xG were massively in the Flames favour all night – so in translation the Flyers were able to limit the Flames kind of okay, but when they did mess up, they messed up real bad.
Corsi King – Milan Lucic (81.99%) narrowly edges Jonathan Huberdeau (78.90%) for top spot amongst forwards. Nikita Zadorov (73.84%) has become very accustomed to the top spot-on defence. All the Flames skaters finished above 50% except for one guy. The way all the metrics lay out confuses me, but he must have been the guy the Flyers went after. I thought he was fine and there were no actual truly bad performances – it was pretty much an AHL team they faced.
Corsi Clown – Adam Ružička (35.83%) was here while linemates Lindholm (53.25%) and Toffoli (53.24%) were much higher. Ice time amongst the three at 5v5 was all within 35 seconds of each other. As far as the model is concerned Ružička missed being involved in the one high danger chance those two quantified and as such his metrics ended a lot worse. This Is why watching every single game to evaluate is just as important as using the numbers. To get the lay of the land you have to include both.
Under Pressure – 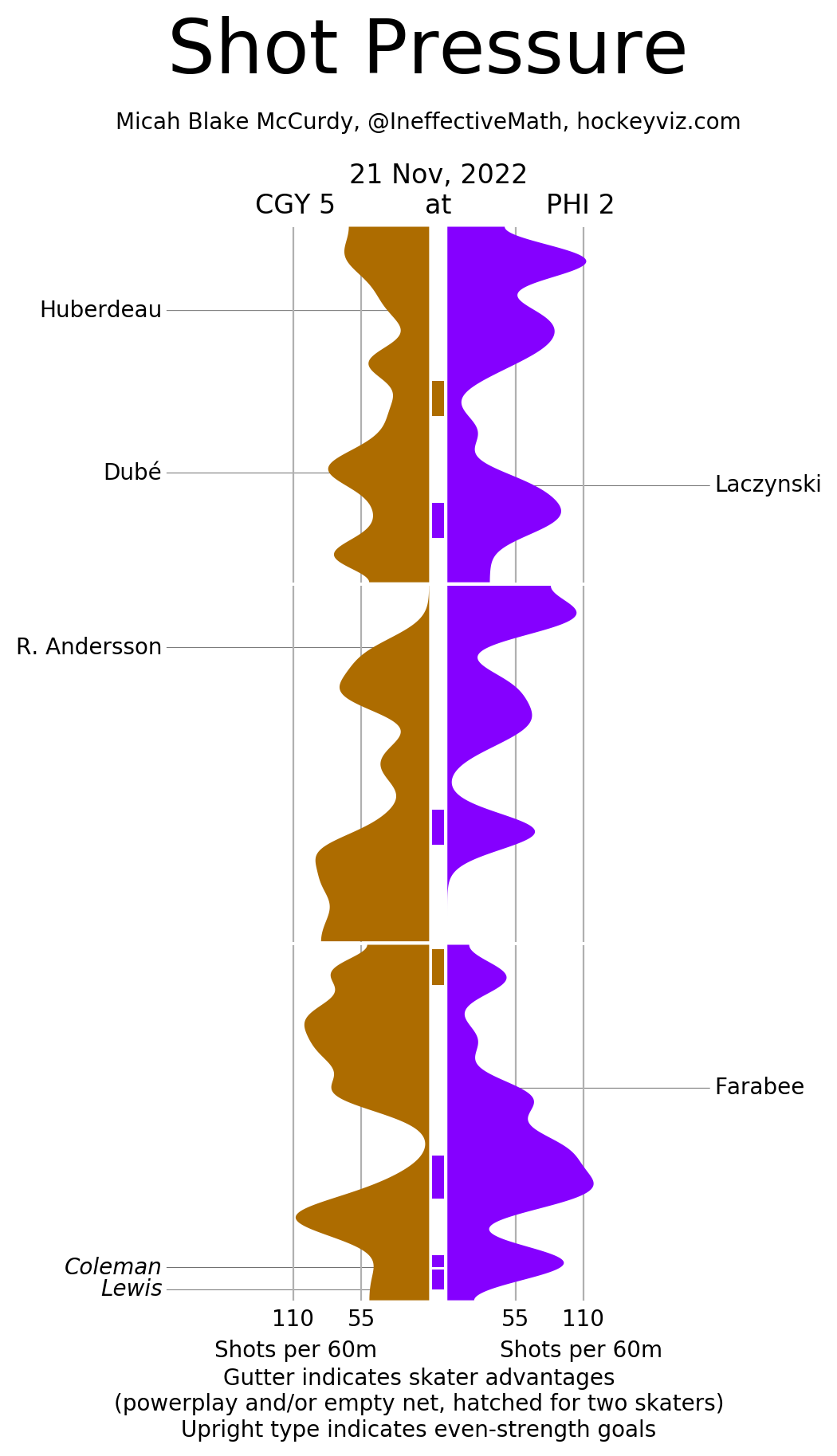 Taken By Chance – Nobody gave up more than 4 high danger chances 5v5, one of which also counted 4.5 (SVA) for himself. Chris Tanev (68.84 SCF% // 55.74 HDCF%) and Dillon Dubé (63.74% // 38.84%) were those two guys, Tanev with the higher number of dangerous chances involved in. I guess it’s not necessarily directly involved in – it just happened while they were over the boards, so it counts for them. Yet another reason that makes watching so important. Context to play matters – just sharing charts without seeing what is happening is just… anyways. Big night for Huberdeau (83.13% // 100%) who may have needed this Eastern swing against familiar opponents to get his groove back – it’s working.
xG Breakdown – 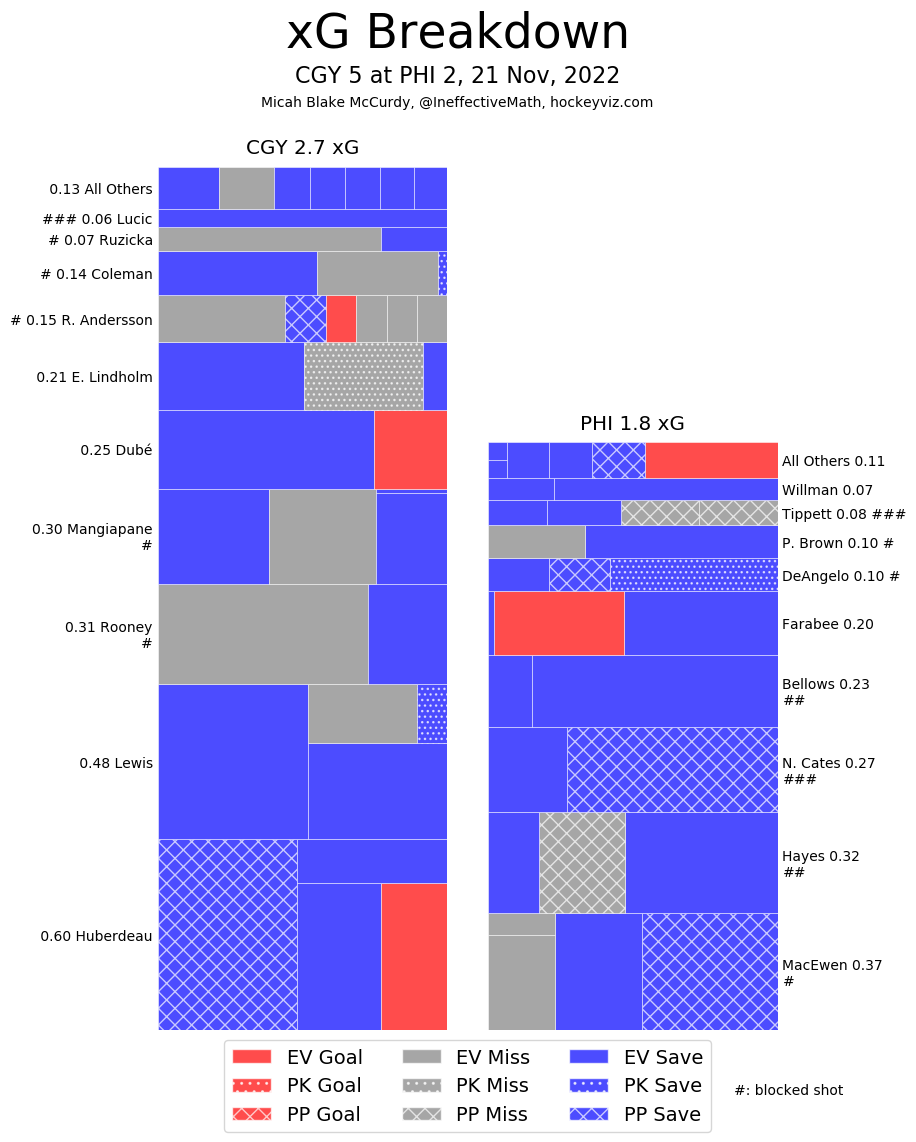 xGF% – MacKenzie Weegar (92.90%) and Huberdeau (92.06%) with top notch games. Players of their skill level should dominate the roster that was iced by the Flyers, but there’s talk about doing it then actually going out and doing it. Two of the Flames three big off-season additions walked the walk against the Flyers, with first day free agent signing Kevin Rooney (85.05%) right there with them. Oh crap I was going to say Kadri (82.41%) but the Roons came out – good bounce back game for Rooney after sitting three in a row.
Game Flow – 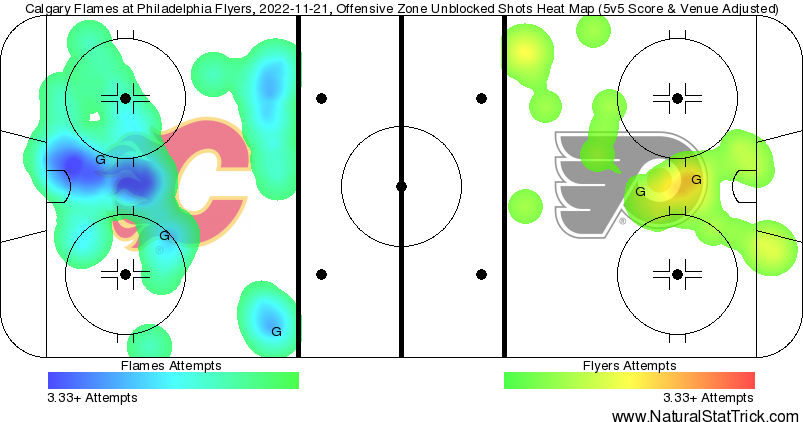 In The Crease – I’m going to be a little mean to Mangiapane here, but I’m sure he’s beating himself up over that pass more than any fan could. Without that terrible turnover to Farabee, Markstrom probably only lets the Laczynski goal get by him – and even then, the defender (was Zadorov) let the young guy with 20(ish) games of experience stick be completely unchecked. Might be the one bad move he made all game, and it happened in a split second. 1.08 expected goals against with a high and medium danger goal getting by at 5v5.
Today’s Specials – I honestly hope some nights the Flames don’t get a powerplay. If they win the faceoff and establish possession it’s the bare minimum of passable, but if they have to try and break the puck in because it was cleared it just ends up a track meet. Everyone skates a lot for 2 minutes and they go back to even strength. Johnny Gaudreau is gone – he left – find someone else to be the designated carry-in guy. Kadri should be the answer if you’ve paid any attention to how your power play is functioning. Please, Mr. Muller, something.
Player Spotlight – Dennis Gilbert – I’m skeptical that there’s still room in the new NHL to fight your way onto the roster like there was 10+ years ago but Gilbert sure is trying. 3 fights in 5 games as a flame and he hasn’t really hurt them with his play yet. Michael Stone joined the team in Philly for the morning skate so he’s presumably close to coming back. I don’t think anything Gilbert is going to do will ever be enough, but respect from me because he sure is trying.
The Goals –
Flashalytic’s 3 Stars –
1) Jonathan Huberdeau
2) MacKenzie Weegar
3) Nazem Kadri
The Flames continue their road trip on Wednesday at 5 p.m. MT against the Pittsburgh Penguins.
(Stats compiled from Naturalstattrick.com 5v5 SVA // Game Score from Hockeystatcards.com // xG and Under Pressure charts from HockeyViz.com // Game Flow and Shot Heatmap from NaturalStatTrick.com)
Editorials
Recent articles from Shane Stevenson