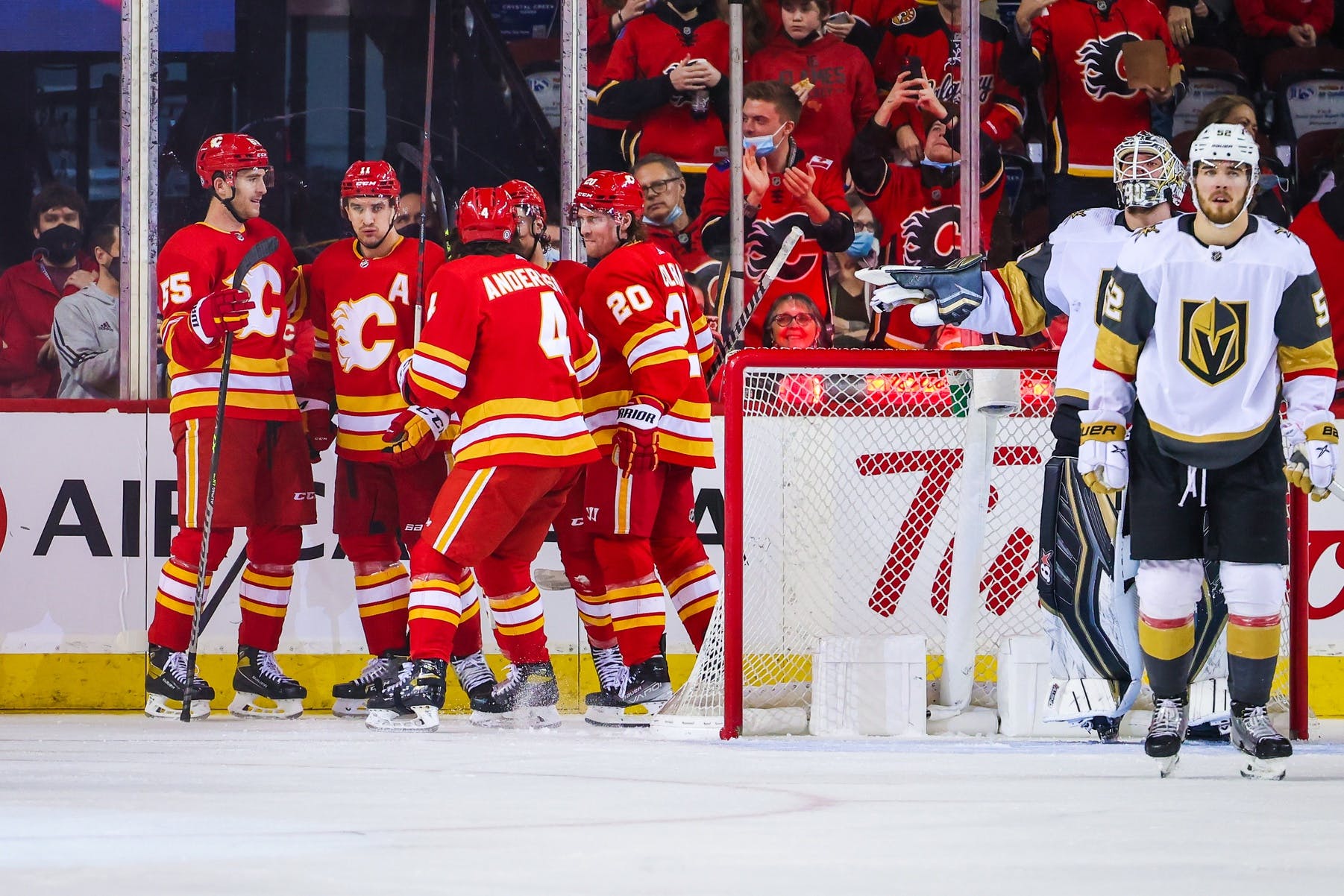 By Shane Stevenson
11 months ago
People can say whatever they want about the Golden Knights playing the night before – Calgary still executed their plan and never quit the pressure. It really felt like the Knights players weren’t playing at their best level as the later stages of the game came around. Markstrom did earn his shutout as well having to make a handful of impressive stops in this game. A great team effort against a division rival for the Calgary Flames.
CF% – 62.09%, SCF% – 64.33%, HDCF% – 63.00%, xGF% – 62.65%
It’s a Team Game – A solid effort from start to finish, Vegas never had an advantage statistically in any given period. The Flames played with a bit of grit as they were consistently finishing checks and fighting for positioning in the slot. Vegas didn’t exactly fight back in this one as hard as I’ve seen them do before. Next time the two teams meet Eichel and Stone could be in the lineup to give Calgary more of a test.
Corsi King – Noah Hanifin (80.46 CF%) spent 4/5ths of the game seeing pucks go towards Lehner instead of Markstrom – he was fairly dominant tonight. Matthew Tkachuk (79.83%) was the forward on top which really should shock nobody as he’s always near the top. Blake Coleman (58.27%) and his line also fared well in this contest.
Corsi Clown – It was close to none again, but Trevor Lewis (42.00 CF%) did see some more chances directed at his own net then on the oppositions. Only 1 chance of any significance (HDCA: 1) amongst the 5+ he saw. So he didn’t have the puck as much as his opponents, but they hardly gave up any good chances all game.
Taken By Chance – Mikael Backlund (75.31 SCF% // 70.80 HDCF%) has his first career 4 point night – which makes absolute sense seeing as he was the player classified with the most raw totals of high danger chances created. Rasmus Andersson (84.88% // 84.25%) can’t let his D partner have all the credit, for them to get these sorts of numbers the two are usually clicking on the same page. Hanirazz lives and breathes as an above average NHL top 4 D-pairing.
xGF% – Naturally all the players previously mentioned as category leaders were doing fine here as well. Andrew Mangiapane (64.30 xGF%) could have had a hat trick if he got one extra bounce when he had multiple opportunities on the doorstep, but I’m sure he was okay with the 2 goals. Elias Lindholm (66.53%) scored on a rocket wrist shot to beat Lehner, that thing had some velocity behind it. Even the need-a-bounce-bad Dillon Dubé (63.08%) graded out well above replacement level against Vegas.
Game Flow –

Right from the start Calgary came out gunning for some goals. Playing against good teams with a lead is usually a priority and Calgary got on top of things early. They never gave up the whole way – hardly relinquishing any momentum for any extended stretches of time. A solid all around game from the Flames.
Game Score – With a goal and three apples Mikael Backlund (5.24 game // 0.69 average) graded out as the highest impact player – rightfully so. The Flames second line with Mangiapane (3.35 // 0.98), Coleman (1.43 // 0.66) and Backlund have been providing some secondary scoring of late. The hardest part is seeing players like Sean Monahan (0.50 // 0.43) and Dillon Dubé (0.26 // 0.29) get chances but have none of them go their way.
Shot Heatmap – 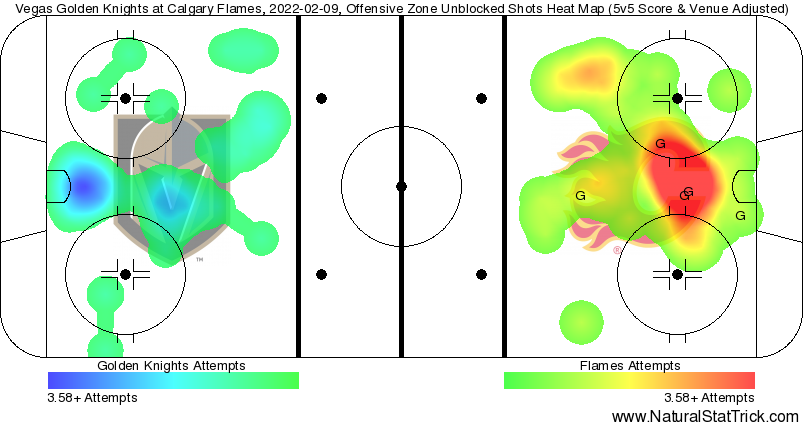 Volume and area you get the volume from are what matter the most. As we can see two quality teams both emphasis driving the slot for attempts. Calgary had possession of the puck for more time and thus were able to pepper Lehner with more dangerous opportunities. Lehner did let some long-distance goals in, but the VGK forwards never created enough to stay a consistent threat at any point.
In The Crease – Expected goals against at 5v5 were 1.69 with none beating Jacob Markstrom as he moves into sole possession for second most shutouts in any season in franchise history. Only Kiprusoff’s 10 from his Vezina season stand in front of Markstrom, and he’s got 39 games of runway to try and beat it. Go make history Marky, you’ve got a chance.
Today’s Specials – Calgary won the special teams battle with 1 PP goal to none. Two opportunities for each team. Calgary’s first unit struggled to get possession in deep on both chances, but Calgary’s second unit was able to cash in. Good for Andrew Mangiapane to score some goals in the Dome to start this homestand.
Player Spotlight – Chris Tanev – I recently did an article for FlamesNation on how J.T. Miller would fit if acquired by the Flames. In that I notice a very specific pattern between where Miller allowed shots from in 2019-20 and 2020-21. The right side of the crease, almost right on top of the goalie seemingly. The only real logical explanation was that Chris Tanev had left the team – which made me even more grateful he plays for Calgary right now.
Flashalytic’s 3 Stars –
1) Mikael Backlund
2) Jacob Markstrom
3) Noah Hanifin
The Flames continue their season against the Toronto Maple Leafs tonight – Feb. 10 – at 7 p.m. MT.
(Stats compiled from Naturalstattrick.com // Game Score from Hockeystatcards.com)