Beyond the Boxscore: Calgary Flames foil Mark Giordano’s return to the Saddledome 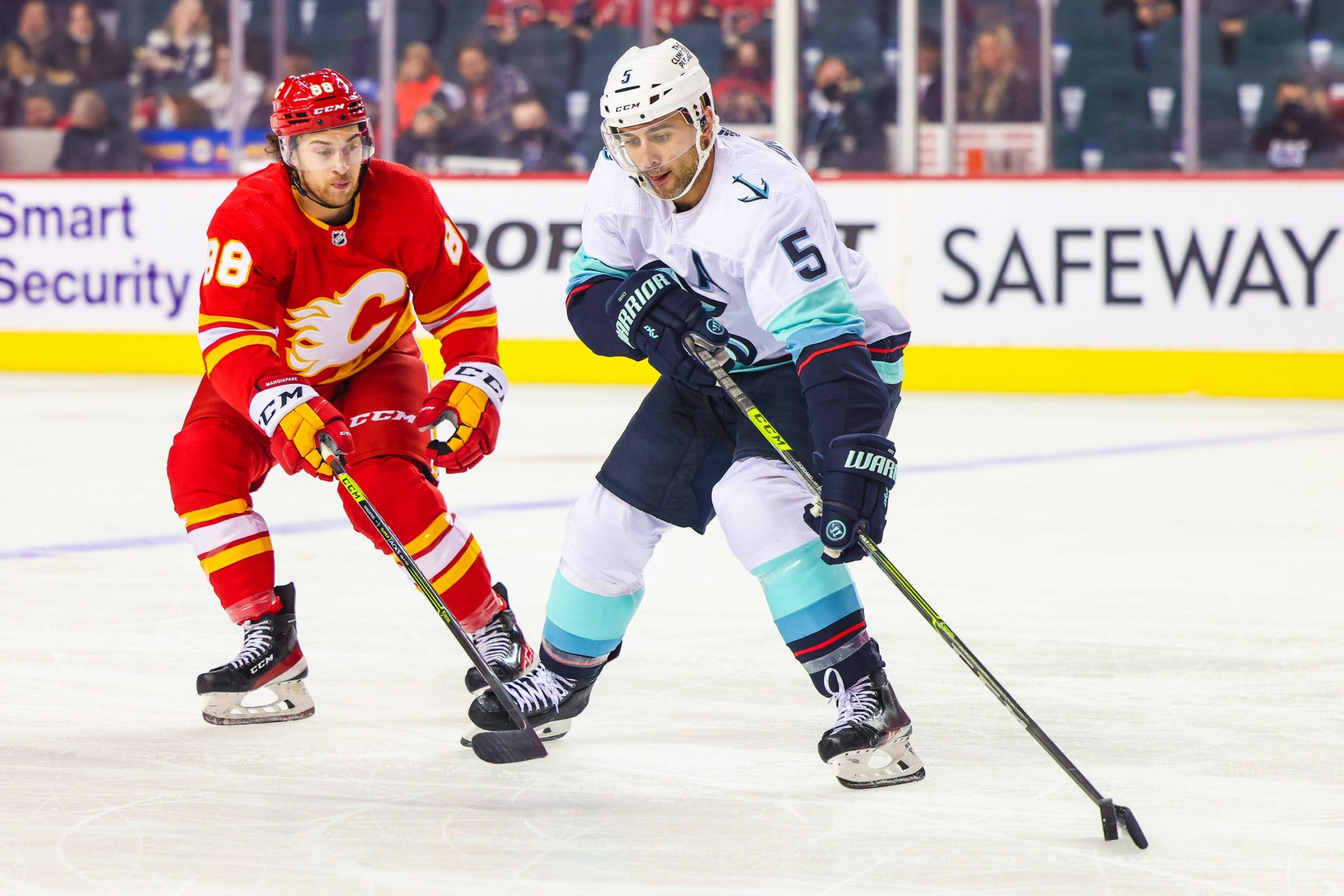 By Shane Stevenson
11 months ago
Seattle is a team that doesn’t create much offence – and against Calgary got just 2 high danger chances at 5v5. Never were the road team able to gain any significant traction for any stretch of time. It was more than welcome to have Giordano back in the building, but he and his new squad ran into a Flames squad that seemingly cannot lose.
CF% – 62.34%, SCF% – 70.83%, HDCF% – 88.35%, xGF% – 71.31%
It’s a Team Game – The Flames’ worst period overall was the first frame. Within that first 20 Seattle was able to be kind of close, but in the final 40 if it weren’t for Grubauer, it would have been a different story. Weird to say considering all the grief he’s brought them this season, would be a good thing if Grubauer could rediscover his prime game.
Corsi King – Mikael Backlund (89.92 CF%) and his boys set the pace for Calgary, with Nikita Zadorov (82.11%) and Erik Gudbranson (77.27%) close behind. The offensive zone starts that the two defencemen get is high, but if they find success under the coaches tutelage Calgary can squeak out some close wins.
Corsi Clown – Oliver Kylington (36.35 CF%) who is usually near the top of this list struggled to limit the opposition from taking chances. Now it’s also important to note that despite getting out chanced in overall shot attempts what Kylington did give up was of very little significance. Seattle only found 2 high danger chances at 5v5 – most guys were more solid defensively than some numbers would initially indicate.
Taken By Chance – Seven different players finished with 100% HDCF%, but Backlund, Coleman, and Mangiapane got well over 9 high danger chances and couldn’t tickle the twine. Those three were by far the most dominant of anyone on the ice but got stonewalled by the SEA tendy. No Flames player was truly defensively deficient.
xGF% – Mikael Backlund (93.15 xGF%) was a machine, just a unit. The goal scorer Elias Lindholm (65.06%) and linemate Matthew Tkachuk (65.85%) didn’t feel as much resistance as they could have. The best line in the league having a good game is hardly new news, but it’s always worth talking about.
Game Flow – 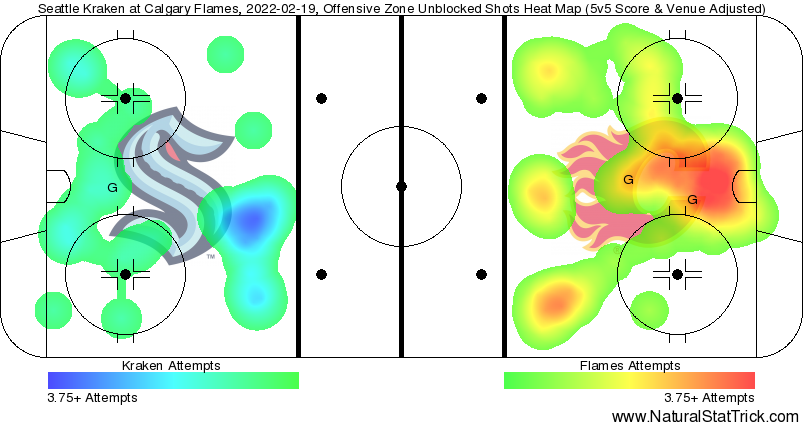 Calgary got back into terrorizing opposition net-minders with a hefty amount of slot shots. Seattle showed up, but like they usually have done this season ended up with a loss.
In The Crease – Markstrom had to make some great saves at certain times including an incredible stacked pad save. Seattle only mustered 1.06 expected goals against the tendy in 56+ minutes of 5v5 ice time – that’s less than Columbus got when they Flames handed them their lunch. Only goal to beat him was classified as high danger, he finished with a 5v5 SV% of 0.947%.
Player Spotlight – Blake Coleman – Another quality performance for the free agent acquisition who has started to look more comfortable during this streak. His defensive impact was being felt right off the opening puck drop of the season and now that the offence is catching up he’s getting more notice. It’s a shame him and his line weren’t able to score in this one, but he is playing great hockey.
Flashalytic’s 3 Stars –
1) Elias Lindholm
2) Matthew Tkachuk
3) Mikael Backlund
The Flames continue their season on Monday at 2 p.m. MT against the Winnipeg Jets.
(Stats compiled from Naturalstattrick.com // Game Score from Hockeystatcards.com)