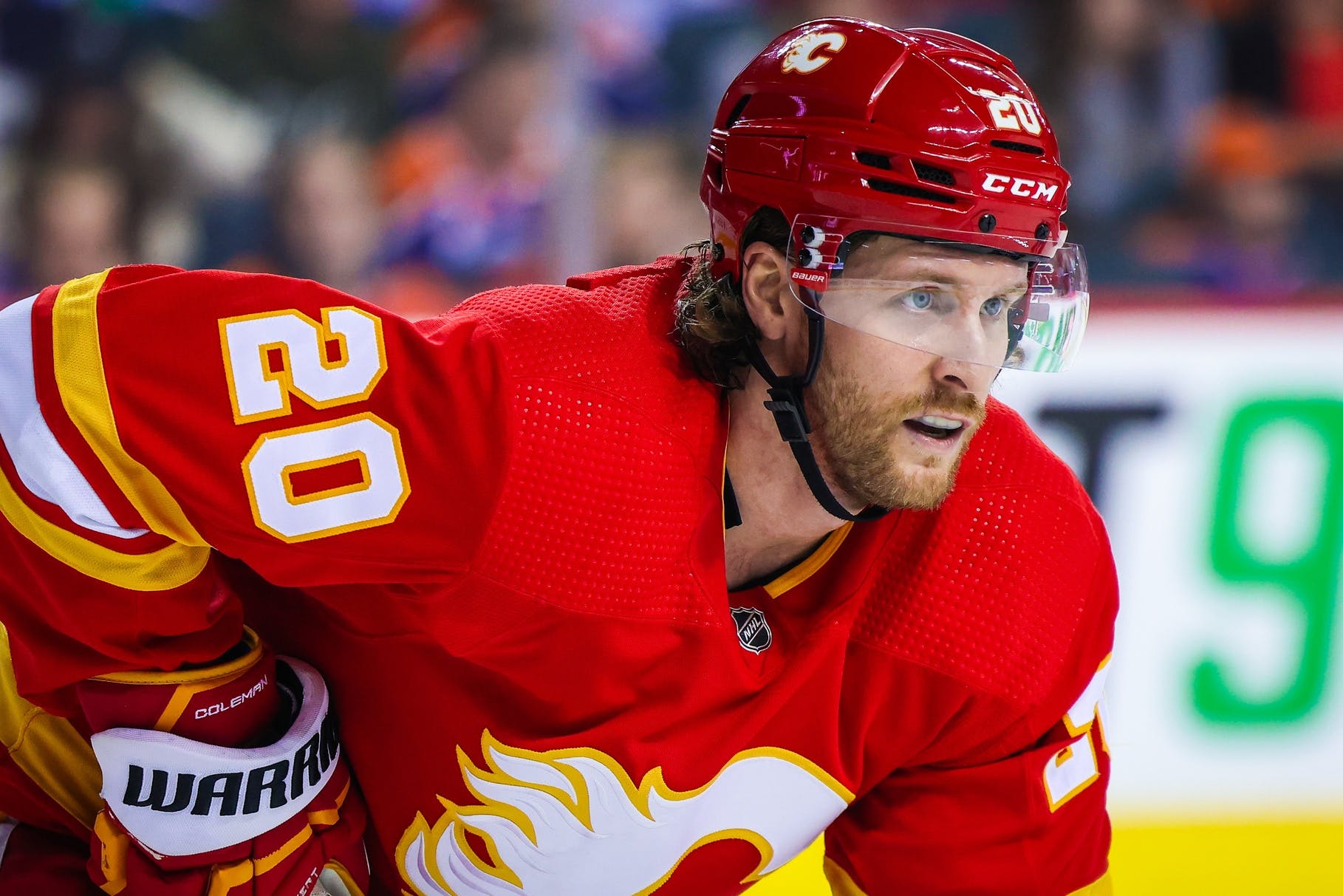 By Mike Gould
2 months ago
The Calgary Flames have one heck of a hockey player in Blake Coleman.
The 30-year-old Plano, Texas product was one of the Flames’ most consistently effective players throughout the 2021–22 season, his first with the team after signing a six-year deal last summer.
Coleman helped form a dominant two-way line with Mikael Backlund and Andrew Mangiapane. He produced at a strong clip — finishing sixth on the team with 1.73 five-on-five points/60 — but received almost no power-play time.
Throughout his tenures with the New Jersey Devils, Tampa Bay Lightning, and Flames, Coleman has never been leaned upon as a power-play weapon. Only seven of his 159 career points have come on the PP, although he’s managed 15 shorthanded points.
The only five Flames to score at a better rate at five-on-five than Coleman last season were Johnny Gaudreau, Matthew Tkachuk, Elias Lindholm, Andrew Mangiapane, and Adam Ruzicka. The first four all ended up scoring at least 35 goals, while Ruzicka’s results are likely skewed by his small sample of games.
Coleman was a regular with the Flames all season long. He was a top-six mainstay. The Flames brought him in on a hefty deal. Why shouldn’t he be used in all situations, just for kicks? (Sorry.)
Of course, the Flames have enacted significant personnel turnover this summer. Past power-play fixtures Gaudreau, Tkachuk, and Sean Monahan are all gone, with newcomers Jonathan Huberdeau and Nazem Kadri assured to see time on the top unit.
But Coleman is just as viable a PP option as anyone else on the Flames not named Lindholm, Huberdeau, Kadri, and Mangiapane. He’s one of the fastest skaters on the team and fearless in the corners. He’d likely thrive next to common linemate Mikael Backlund on the second unit.
That being said, it remains to be seen whether Backlund and Coleman will even remain together in 2022–23. With Kadri in the fold, Backlund is likely to start the season as the Flames’ No. 3 centre.
On paper, Coleman is absolutely one of the Flames’ four best wingers. The only two clearly ahead of him on the depth chart are Huberdeau and Mangiapane. Coleman can play on both sides and figures to be a natural stylistic fit on a line with Kadri.
Kadri and Backlund are both strong two-way players, but Kadri is coming off an 87-point season with the Colorado Avalanche. The 31-year-old centre may never replicate that level of production, but he’s always been a strong play-driver in the offensive zone.
Owing largely to the shortened 2019–20 and 2020–21 seasons, Coleman has never reached the 40-point plateau in the NHL. Expect that to change if he sees significant playing time with Kadri this year.
Coleman finished the 2021–22 regular season with 16 goals and 33 points in 81 games. Zero of those points came on the power play, and he shot just 7.5% — his worst shooting percentage since his rookie season. Despite that, he was a legitimately impactful top-six forward on the top team in the Pacific Division.
We sometimes see players take a season or two to settle in with their new teams after signing as unrestricted free agents. It took a while for both Michael Frolik and Jiri Hudler to reach their full potential after showing flashes in their first go-rounds with the Flames. Coleman had a much stronger debut season in Calgary than those two players, but he also has more to give.
He’s now on the wrong side of 30, but Coleman has relatively few hard miles on him and has consistently been a highly effective player throughout his NHL career. He’s very strong despite his smaller stature, and he’s an outright pain to play against. His presence was absolutely key to the Lightning winning the Stanley Cup in both his seasons with the team.
The Flames could probably stand to add another top-nine winger, but that’s not remotely a slight against Coleman. He arrived in Calgary as advertised. It’s not out of the realm of possibility for him to push for 50 points with increased deployment in 2022–23.