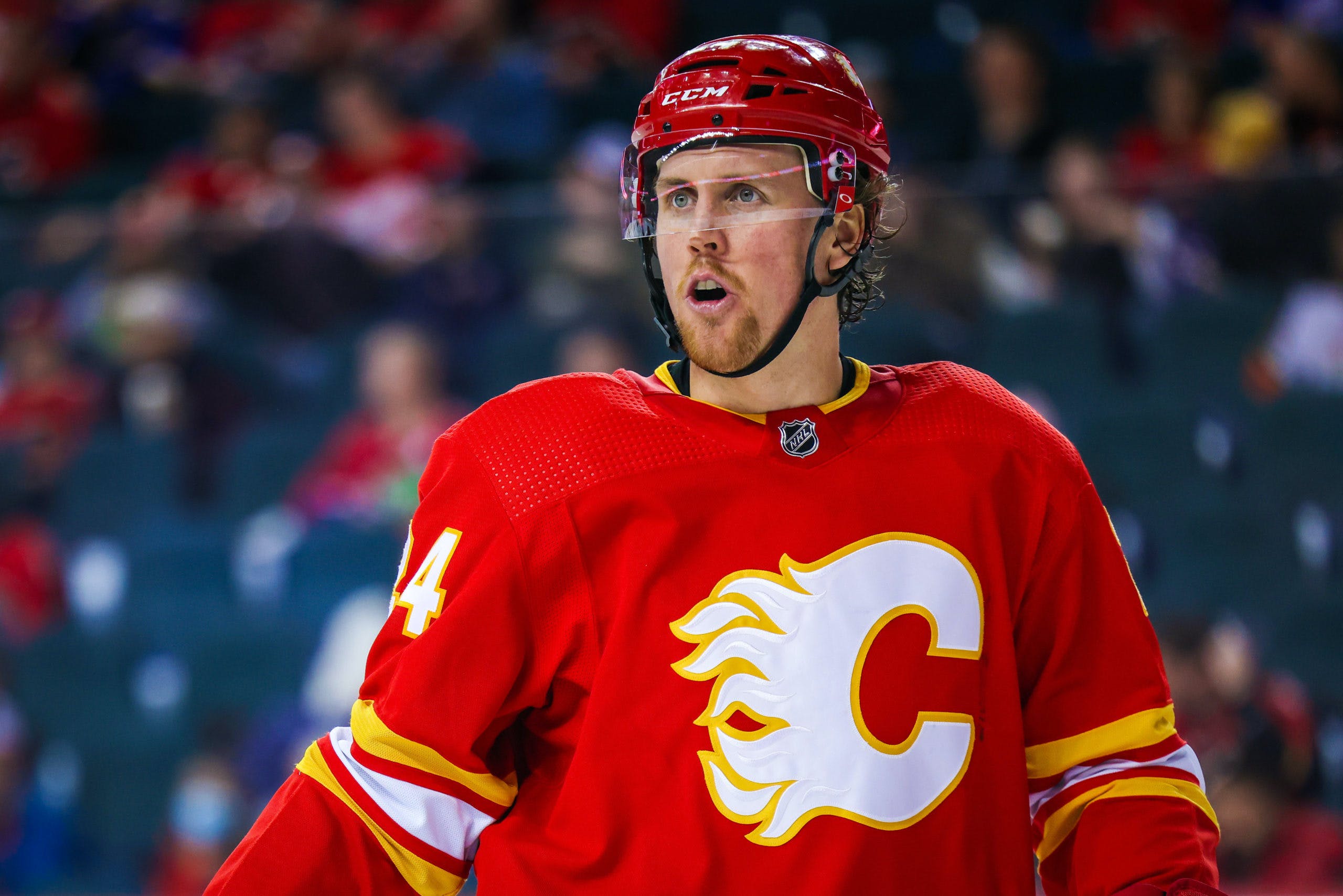 By Ryan Pike
5 months ago
It’s been said that there are no small parts, only small actors. For the Calgary Flames in 2021-22, forward Brett Ritchie was asked to play a small part, dressing in half of his team’s games in a secondary role. When he played, he was perfectly acceptable for the role he was asked to fill.
But as a depth player approaching his 30th birthday, his days with the Flames may be numbered.

The older brother of Nick, Brett was an Ontario kid and a product of the Ontario Hockey League. He played for the Sarnia Sting and Niagara IceDogs, but didn’t break the point-per-game barrier until his 19-year-old season. He was a second round select of the Dallas Stars in the 2011 NHL Draft and played for Canada at the 2013 World Juniors, in no small part due to his size and pugnacious tendencies – he wasn’t a highly-skilled junior player, but he worked hard and played with a chip on his shoulder.
Ritchie went pro in 2013-14 and played six seasons in the Stars organization. He bounced between the NHL and AHL Stars clubs, eventually getting a toehold in 2016-17 and spending three seasons as a bottom six forward for the Stars, using his frame and crash-and-bang style pretty effectively. His first full NHL season was his most productive, with 16 goals and 24 points in 2016-17.
Ritchie wasn’t qualified by the Stars in the 2019 off-season and signed with the Boston Bruins. He spent the 2019-20 season bouncing between Boston and AHL Providence. Following the 2020 off-season, he joined the Flames on a camp try-out and eventually signed a one year deal to join the Flames full-time. He played 32 games, bouncing between the NHL club and their taxi squad and amassing eight points.

With the Flames needing to expose a couple forwards with active 2021-22 contracts in the Seattle expansion draft, Ritchie managed to negotiate a deal for 2021-22. After he wasn’t selected by the Kraken, he stuck around on the Flames’ NHL roster for the entire season.
Ritchie missed 20 games due to injury and was a healthy scratch for 21 games. In the 41 games where he did dress, he bounced between the third and fourth lines. His primary gig was on the right side of the fourth line, providing a physical forecheck but only sporadic offensive contributions.
The most remarkable thing about Ritchie’s season is that he scored three goals, and twice he scored in a game where he was pressed into action on short notice:
If nothing else, Ritchie was a really reliable depth forward. He didn’t drive play, but he could play with good players and not drag them down noticeably. Was he actively good? Well, he was more or less replacement level. But for an organization with a lot of untested youth on the AHL roster, Ritchie’s presence allowed them to percolate in Stockton and not be thrown to the wolves in the NHL too early.

The problem with Ritchie is that this is probably as good as he’s going to get. He turns 29 on July 1 and while this season he provided some insulation for the organization’s younger players, he would potentially be blocking the likes of Matthew Phillips, Luke Philp, Jakob Pelletier, Justin Kirkland, Walker Duehr (and others) if he stuck around in a regular spot.
If he’s signed to be a healthy scratch, that’s one thing. He’d be perfectly acceptable as a short notice fill-in. But for the developmental progression of the club’s younger players, the 41 games that he played in the NHL this season might be better utilized by the organization’s up-and-comers.