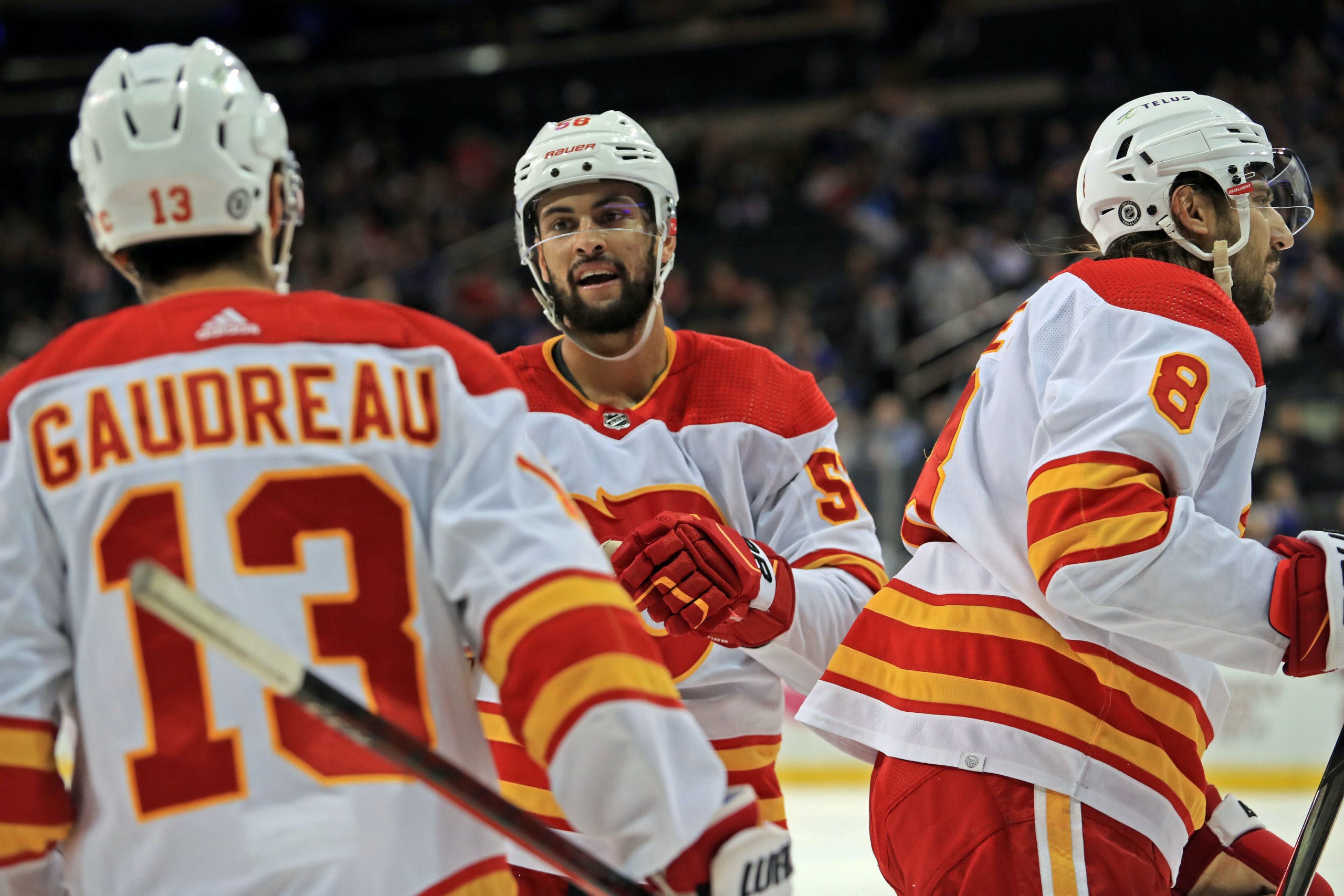 By Shane Stevenson
1 year ago
While the actual one quarter mark of the season lies at some point mid-way through game 21 – we’re calling that a technicality here at FlamesNation and are diving into where the players are at and how they are doing so far in 2021-22. Next on deck: defence.
Grade scale: A – exceptional, B – good, C – satisfactory (meets base level NHL expectations), D – underperforming, F – why are you even on this roster?
Player: Chris Tanev
Lines used on: second D pair – first PK Unit
Go to tweet: Chris Tanev can fix anything, even a broken heart
Current evaluation: A
The man has been nothing but consistent since coming to Calgary. He has tremendous control of his stick and turns any young mobile defenceman that plays with him into Norris quality. Maybe Tanev should get proper consideration for that, but he’ll never have the point totals for an award deemed to be an offensive one.

Player: Erik Gudbranson
Lines used on: third D pair – first PK unit
Go to tweet: Did Gudbranson just steamroll Gallagher?
Current evaluation: C+
I never thought I would rate Gudbranson anything higher than a D at best, but here we are. Sutter has a way of turning third pairing D into solid players that work for him. Gudbranson’s strength so far has really been on the PK – at 5v5 he has moments that show what he’s been before. However, with consistent back-checking from the forward group it’s made the defencemen’s lives a lot simpler. He’ll never be an amazing puck-moving skater but if he plays within his limitations… its worked.

Player: Juuso Välimäki
Lines used on: third D pair – occasional PK
Go to tweet: Look how much mobility Välimäki brings to the third pair!
Current evaluation: C
He’s not brought a consistent defensive effort when he’s been on the ice. He can transition the puck better than some in the lineup, and certainly skate better, but he does not defend in his own zone at the same strength as others. It’s really come down to a choice and the Flames have the benefit of having a new look third pair in any game. Does Välimäki and his offence deserve to play more often? I say yes, but I also don’t think he deserves to play every game based on his current body of work.

Player: Nikita Zadorov
Lines used on: third D pair
Go to tweet: Zad bomb incoming
Current evaluation: C+
Another player you might be surprised I’ve taken a liking to – in a certain sense. When he tries to do too much he completely collapses the system the Flames try to employ. If he sticks to what he’s good at – being a large physical presence that defends the slot – then he fits better than the public wants to perceive. He grades out at C which would be the definition of just above satisfactory to me – and needs to turn it around soon as he’s currently on a downward trend

Player: Noah Hanifin
Lines used on: first D pair – second PP unit – second PK unit
Go to tweet: Need a goal? I Noah guy
Current evaluation: B+
Hanifin has been a steady presence that’s been getting better as the season goes on. He adds mobility and more skating talent than many give him his due for, as well as a decent enough defensive game. I wouldn’t mind a better slot defence from him specifically, but also I’d rather he keep playing his game. He’s trending up in a big way lately – look for him to find the scoresheet more often in the next 20 games.

Player: Oliver Kylington
Lines used on: second D pair – minimal second PP unit
Go to tweet: Oh my lord have you seen what Kylington is doing lately
Current evaluation: A++
If we base our grades based on expectations then Kylington breaks the scale. He came into training camp and even i assumed he’d be placed on waivers. He won his job and is the teams leading defensive scorer at 5v5 and has solidified his spot alongside Chris Tanev. Kylington’s took a big step in figuring out how to use his top notch skating as a defensive asset – without him the Calgary Flames probably aren’t first in the West as well.

Player: Rasmus Andersson
Lines used on: first D pair – first PP unit – second PK unit
Go to tweet: What’s that rascal Razz up to now?
Current evaluation: A-
He grades out a little higher than Hanifin strictly due to his offensive contributions. Andersson was the subject of much criticism last year – an unfair year to young defencemen in many ways. Coaches are smart people and Razz didn’t have Tanev to help keep him alive as the North division forwards ate up younger blueliners for dinner. (It happened league wide actually – Vince Dunn a prime example of similar numeric trends). This year Razz is back and better than ever – making the Flames even more dangerous as an elite team.
The rest of the crew: Michael Stone is the entire rest of the crew and has spent 19 games in the press box out of 20. The team is fine with him there as they aren’t hindering his development and know they can plug him in the lineup last minute and he’ll provide what Stone provides. The ultimate press box guy.