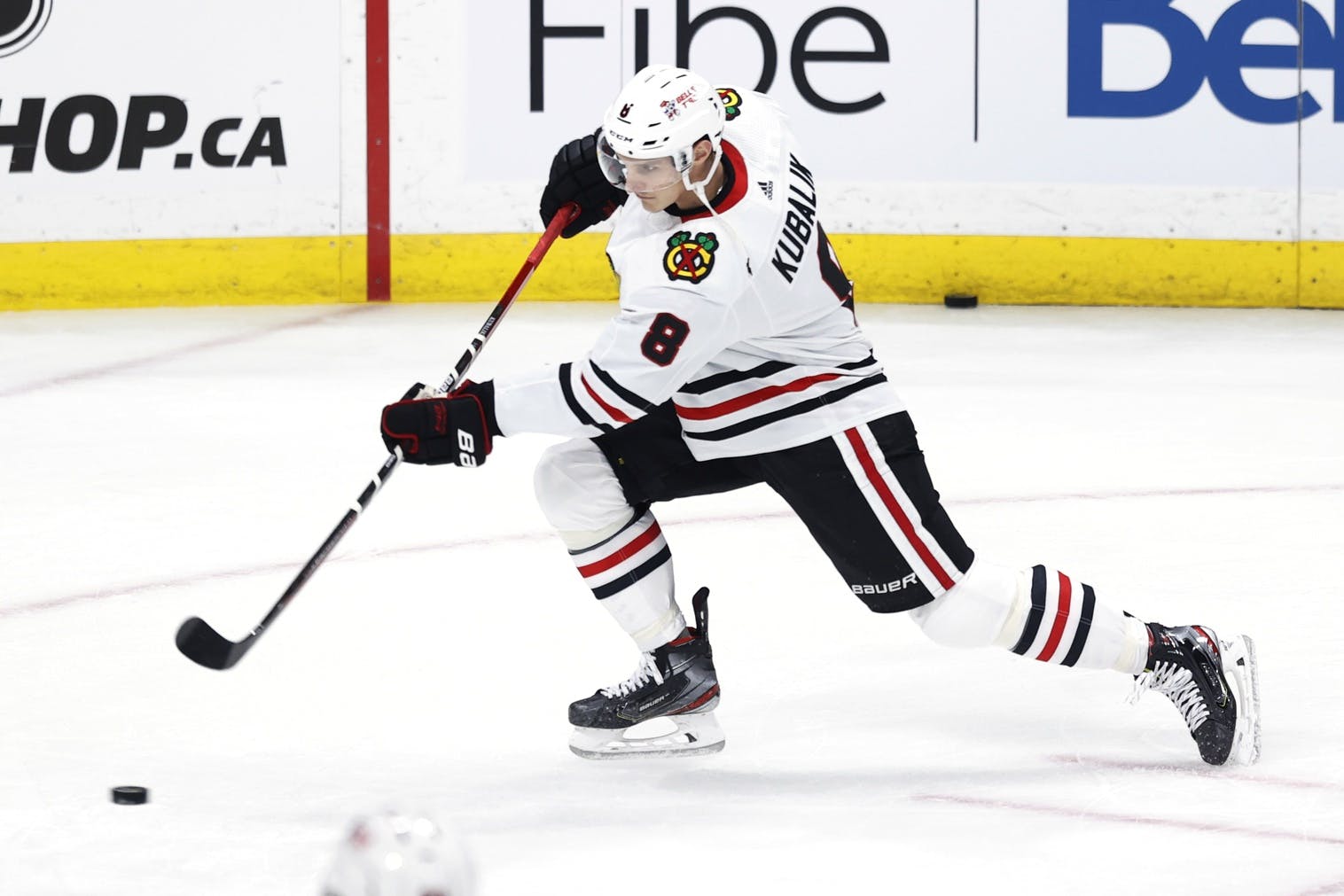 By Mike Gould
6 months ago
We’re only a day away from the National Hockey League’s UFA market opening for the summer, and the pool of talent expected to be available has only gotten deeper.
The Calgary Flames are still waiting for a decision from superstar forward Johnny Gaudreau. David Perron is reportedly set to leave the St. Louis Blues. Even the great Evgeni Malkin is expected to test the market.
Many of the players who will become UFAs on Thursday are in the primes of their career. Some, like Malkin, are in their mid-to-late 30s.
But others, like the players listed below, are in their early 20s and would have been restricted free agents … if not for the fact that their respective teams opted against tendering them qualifying offers, thus forfeiting their exclusive signing rights.
These players potentially have room to grow in the NHL and could fill roles on various other teams around the league. Regardless of whether Gaudreau sticks around, the Flames have plenty of holes to patch in their lineup and could stand to add more players on the right side of 30 into their organization.
Here are 10 non-tendered RFAs — nine forwards and one defenceman — who could become Flames on Wednesday.

Dahlen, 24, is a 5’11” left wing who had a solid first season with the San Jose Sharks after making his long-awaited arrival from Sweden. He scored 12 goals and 22 points in 61 games with the Sharks in 2021–22 and was voted the team’s “Rookie of the Year.”
Oddly enough, the Sharks were Dahlen’s third NHL organization. Drafted by the Ottawa Senators back in 2016, Dahlen was traded to the Vancouver Canucks in 2017 as part of the Alex Burrows deal before being dealt to San Jose in 2019 for fellow prospect Linus Karlsson. Now, after just one year in the NHL with the Sharks, it looks like Dahlen could be on the move again.
In his first NHL season, Dahlen was a relatively high-volume shooter who started hot (seven goals in his first 15 games) before seeing less and less ice as the season wore on. He’s a skilled offensive player — the son of former Minnesota North Stars forward Ulf Dahlen — who might be able to boost the Flames’ third line and a secondary power-play unit.

The Anaheim Ducks likely opted against qualifying Milano because they were afraid of what he might have been able to command in an arbitration case. (Expect that to be a recurring theme throughout this list).
The 26-year-old winger is coming off a really nice year with the Ducks in which he scored 34 points in 66 games, pushed play at both ends of the ice, and (most notably) batted in a ridiculous pass from a Calder Trophy finalist.
Milano has had solid years before with both Columbus and Anaheim, and he’s not undersized (6’0″, 194 pounds). In 197 career regular-season NHL games, Milano has scored 36 goals and 81 points. He’s not dissimilar to Dahlen, in terms of his style of play and what role he might occupy with a new team.

Fleury is the only defenceman on this list. The 26-year-old lefty hails from Carlyle, Saskatchewan and appeared in 36 games with the expansion Seattle Kraken in 2021–22.
At 6’3″, 208, Fleury absolutely offers size at the point. To this point, however, he hasn’t been able to take a step toward becoming a legitimate two-way option — even in a reduced role.
Fleury probably won’t cost very much and it’s possible he could improve upon his middling (but not poor) defensive results next season. The Flames don’t have a ton of defensive depth currently in the organization on either side.

Kase, 26, has long been an analytics favourite. Injuries have reduced his effectiveness over the years, but he was relatively productive in his time with the Toronto Maple Leafs last season.
Back in 2017–18, Kase scored 20 goals and 38 points in just 66 games with the Ducks. He was dealt to the Boston Bruins two seasons later but never managed to stay healthy for any length of time after the trade.
After signing with the Leafs last July, Kase appeared in 50 games in 2021–22 and scored 14 goals and 27 points. He subsequently appeared in all seven of the Leafs’ 2022 playoff games, racking up three assists.
Kase is able to play up and down a lineup and could be an asset for a Flames team that needs to score by committee next season.

Heinen would be a really nice add for the Flames. The 27-year-old forward is coming off a year where he scored 18 goals and 33 points while averaging just 12:43 in 76 games with the Bruins. He’s a smart, skilled, and versatile player who takes a lot of shots.
Fun fact: Heinen and Kase were the centrepieces of two separate trades made by the Bruins and Ducks at the 2020 trade deadline. The first deal saw Kase traded to Boston for David Backes, Axel Andersson, and a first-round pick; three days later, the Bruins moved Heinen to Anaheim for Nick Ritchie.
Again, like so many others on this list, Heinen wasn’t qualified by the Penguins out of fears over his potential arbitration case. Pittsburgh is a team with a lot of moving parts this summer, including a disgruntled franchise cornerstone centre. Every dollar counts for that team.

We talked about Pitlick when the Minnesota Wild placed him on waivers during the 2021–22 season, and it’s worth bringing him up again now.
At the time, Pitlick had produced at a solid rate over a pretty small sample (six goals and 11 points in 20 games) with the Wild. He continued chugging along after being claimed by the Montreal Canadiens, picking up nine goals and 26 points in 46 games down the stretch.
Pitlick, 25, is a stocky and versatile 5’11” forward who established himself as a legitimate NHLer with two teams last year. He’s unlikely to replicate his 23.1 shooting percentage, and his defensive impacts leave a lot to be desired, but he’d be a good energy forward for many teams in this league.

Howden, 24, is a Calgary boy who was solid at both ends of the ice in a depth role with the Vegas Golden Knights in 2021–22. He scored 20 points in 47 appearances with the Knights despite averaging just 10:39 per game.
Of course, like Pitlick, Howden’s shooting percentage went through the roof last year (coincidentally, he also scored on 23.1 percent of his shots). But he’s a big, local forward who plays an important position and would probably be an upgrade on a guy like Trevor Lewis on the Flames’ fourth line.
Keep an eye out for a similar player at the very end of this list …

Strome has the highest profile of any player on this list. Drafted third overall by the Arizona Coyotes in 2015, Strome was traded to Chicago for Nick Schmaltz in 2018 and put up 20-goal and 50-point seasons as a Blackhawk.
While Strome has never been considered a speedster, the 25-year-old centre has proven himself more than capable of clicking with high-end talent. He performed very well on a line with Patrick Kane in Chicago, but it’s far from a guarantee that he’d receive much playing time next to Matthew Tkachuk or (if he stays) Johnny Gaudreau in Calgary.
The Flames absolutely need help down the middle, but is Strome the type of player who could displace Mikael Backlund from his No. 2 centre position and help create a high-powered secondary scoring unit? That’s easier said than done.

Kubalik is another player who has produced extremely well alongside the Blackhawks’ stars. The big winger scored 30 goals in 2019–20 and was named a Calder Trophy finalist; two years later, it looks like he’s on his way out of Chicago.
It’s clear that the Blackhawks didn’t want to risk paying Kubalik a hefty arbitration award, but he’s the kind of high-upside sniper many teams will likely covet on the UFA market.
Kubalik is certainly one-dimensional, in a sense. When he’s not unleashing a heavy shot past a defenceless goaltender, the 26-year-old winger can be hard to spot on the ice. Pure shooters have value … just approach them with caution, particularly in free agency.

Finally, we would be remiss not to mention the most Flames-y player not tendered a QO by his team.
Steel, 24, was made a first-round pick of the Ducks in 2016 but has yet to move the needle in the NHL. Born just outside of Edmonton, the 5’11” centre made his name with the WHL’s Regina Pats as a responsible two-way forward with a strong motor.
However, after four NHL seasons, Steel has yet to surpass the six-goal mark. In each of his first four campaigns with the Ducks, Steel has scored exactly six goals — no more, no less. He hasn’t shown much of the two-way prowess he displayed in junior, either.
Steel sort of fits into the same mould as Howden, being a local boy who could theoretically play a role as a fourth-line centre. However, Steel would have a lot more to prove in that position.