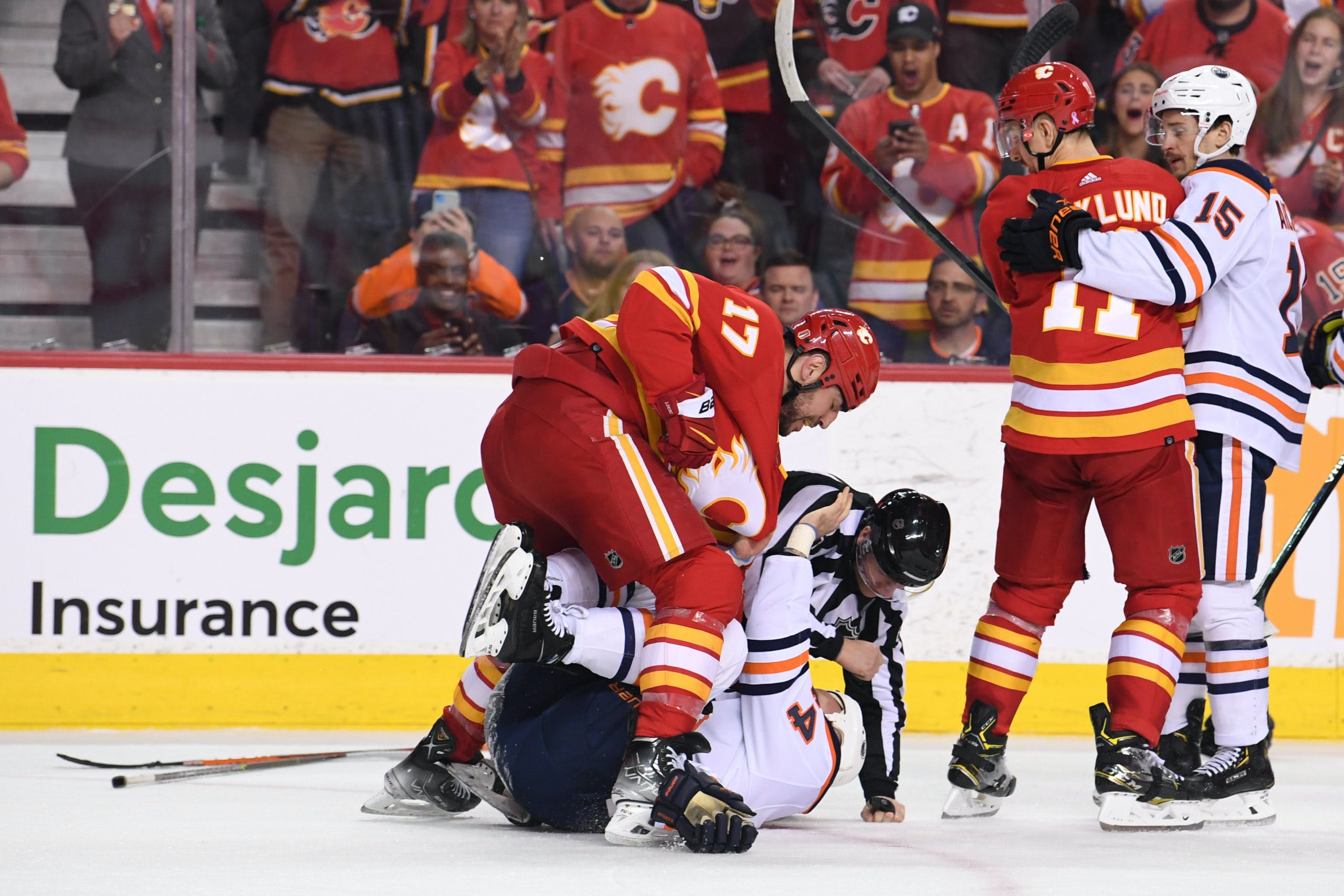 By Mike Gould
8 months ago
In the National Hockey League, the Battle of Alberta winner can be determined three different ways: through goals, fights, or Stanley Cups.
Over the years, the Calgary Flames have racked up 140 wins to the Edmonton Oilers’ 128 in head-to-head competition. The Oilers, however, have five Stanley Cups, with the Flames’ only NHL championship coming in 1989.
Then, there are the fights. Historically, the Flames have consistently trotted out some of the league’s toughest players (Tim Hunter, Sandy McCarthy, and Brian McGrattan say hello). Conversely, many Oilers fans still reminisce fondly about the likes of Dave Semenko, Marty McSorley, and Georges Laraque.
Fighting has become relatively rare (for the best) in today’s NHL, but it hasn’t completely gone away. Almost every team still has multiple players who are more than willing to drop the gloves, and that rings true for both Alberta-based clubs.
Even beyond fighting, pro hockey remains a physical game — especially when the playoffs roll around. Game 1 of the Battle of Alberta on Wednesday featured numerous massive hits and post-whistle scrums.
Under the tutelage of head coach Darryl Sutter, the Flames have become one of the NHL’s toughest teams to play against. They’re big, tough, fast, and skilled. In the first round, the Flames matched the Dallas Stars’ grinding style to a tee; to open the second round against the Oilers, the Flames torched @Mike Smith and @Mikko Koskinen for nine goals.
The Oilers aren’t quite as big or tough as the Flames, but their roster still features more than a few players who earn their keep in the trenches.
Here’s a look at the five toughest players in the 2022 playoff edition of the Battle of Alberta, followed by a list of a few other players who could make physical impacts in the series.

Lucic might be the scariest player in the league. He’s certainly one of the most active pugilists, having dropped the gloves a team-leading seven times in 2021–22. That’s as many fights as the entire Oilers roster managed all season long.
According to the voters over on hockeyfights.com, Lucic won six of his seven fights in 2021–22 (with his only loss coming against Colorado Avalanche defenceman Kurtis MacDermid on March 5). He fought Oilers defenceman @Darnell Nurse during the 2020–21 season, winning handily.
Lucic, 33, appeared in all 82 of Calgary’s games during the regular season, scoring 10 goals and 21 points. He’s been effective in a reduced role during the playoffs, posting solid on-ice shot attempt and expected goal rates despite averaging less than 10 minutes per game.
There’s a decent chance Lucic is the current heavyweight champion of the NHL. You’d be hard-pressed to find a more intimidating player in the entire league. In a playoff series, and particularly in the Battle of Alberta, that’s worth something.

Gudbranson pretty much embodies the term “functional grit.”
He’s exceeded all expectations this season as the Flames’ third-pairing right-handed defenceman, posting career highs in goals and points while helping the team out-chance its opponents during his shifts.
Gudbranson, 30, dropped the gloves six times this season, although none of his fights came against the Oilers. He squared off against Oilers forward @Zack Kassian during his tenure with the Ottawa Senators in 2020–21.
While Gudbranson may not have bested Kassian in their last bout, the Flames’ No. 44 typically ends up on top. Voters gave Gudbranson the edge in all six of his fights in 2021–22.
Gudbranson is big, tough, and willing to go at a moment’s notice. As a defenceman, he usually logs quite a bit of ice time — meaning he has more opportunities to make his presence felt.

Kassian is basically the Oilers’ designated heavyweight by default.
The 31-year-old forward has fought four times against the Flames in his career, the most of any opposing team. He dropped the gloves a team-leading three times this season, most recently squaring off against (and defeating) New Jersey Devils enforcer @Mason Geertsen.
Kassian is no longer nearly as effective a player as he was in his heyday next to @Connor McDavid, but he’s suited up for all eight of the Oilers’ 2022 playoff games and has two points (one goal, one assist).
In Game 1 against the Flames on Wednesday, Kassian logged just 11:35 and failed to register a single hit or shot. He might risk being scratched later on in this series if he doesn’t start making more of a physical impact.

Unlike Kassian, Kane was pretty much everywhere in Game 1.
The 30-year-old forward has yet to drop the gloves as a member of the Oilers. While he didn’t record a shot or a point in the opening game of the series, he threw four hits and did plenty of talking in post-whistle scrums.
Kane has fought 21 times during his career, with a third of those bouts coming during his turbulent tenure with the San Jose Sharks. His list of on-ice enemy combatants includes Gudbranson, Ryan Reaves, and Zdeno Chara.
As far as the current series goes, Kane’s current record — like the Oilers’ — is 0–1.

Ritchie fired his opening salvo of the series in Game 1, although it wasn’t his typical strike.
The pugnacious winger scored his first NHL playoff goal just 6:05 into the first period on Wednesday to chase Oilers starting goaltender @Mike Smith from the game.
Ritchie, 28, has scored just eight goals in his 78 appearances with the Flames since joining the team in 2020. Over the same period, he’s dropped the gloves three times.
Two of Ritchie’s fights as a Flame have ended with a serious injury. Back in 2021, Ritchie dropped then-Oilers forward Jujhar Khaira, resulting in a scary situation on the ice where Khaira appeared to lose consciousness; earlier this season, Ritchie missed multiple weeks after taking the worst of a bout with Nashville Predators defender @Mark Borowiecki.
Even when he’s not fighting, Ritchie is a tough customer on the ice. He’s also been surprisingly effective at driving five-on-five play this season. Ritchie hasn’t been a regular in the Flames’ lineup during the playoffs, but it wouldn’t be surprising to see him remain a constant presence in the Battle of Alberta.

Game 2 between the Flames and Oilers will take place at Scotiabank Saddledome on Friday evening.