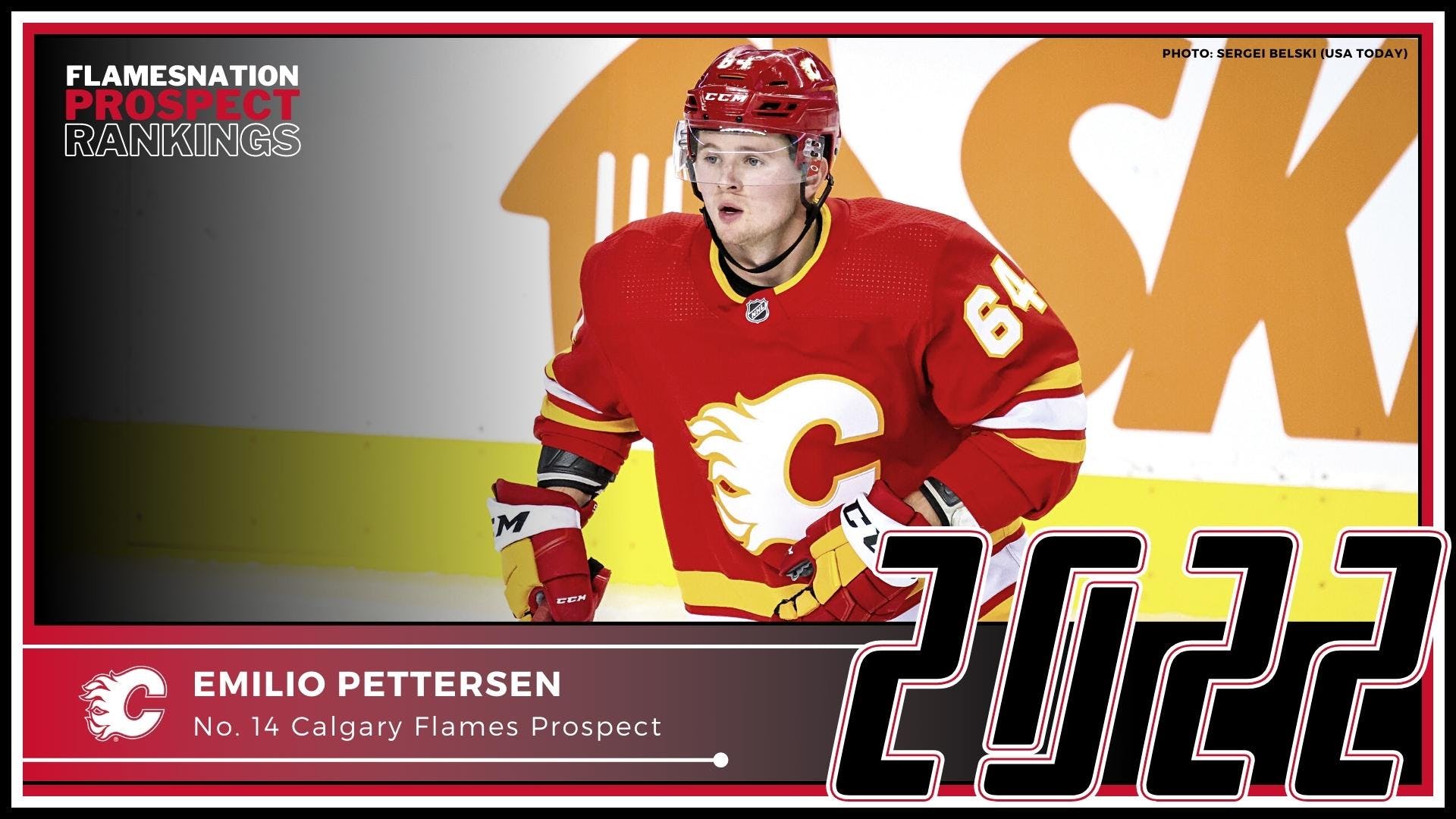 By Mike Gould
3 months ago
Norwegian forward Emilio Pettersen is set to enter his third professional season as a Calgary Flames prospect, and it’s safe to say this is a massive year for him.
The 22-year-old forward has yet to fully find his groove in the American Hockey League, topping out as a solid middle-six complementary player over the last two seasons.
Now, with multiple top-line spots potentially up for grabs, it’s time for Pettersen to step up to the plate.
Emilio Pettersen
Left wing
Born Apr. 3, 2000 (22 years old) in Manglerud, Norway
5’10”, 185 pounds
Drafted in sixth round (No. 167 overall) by CGY in 2018
Pettersen has always been a highly skilled offensive player. He immediately established himself as one of the Denver Pioneers’ top scorers in his first year of NCAA hockey and captured the team’s scoring crown as a sophomore, racking up 35 points (13 goals, 22 assists) in 36 games.
After signing an entry-level contract with the Flames in 2020, Pettersen joined the American Hockey League’s Stockton Heat for the 2020–21 season. He got off to a hot start in the AHL, scoring four goals and 10 points in his first 12 games, but fizzled out after that as the Heat finished on a dismal 3–15–2 run over their last 20 contests.
It took Pettersen 17 games to score his first goal of the 2021–22 AHL season, and he immediately went the next 13 games without scoring another. After that, he got into a bit of a rhythm on a line with Connor Zary and finished the year with 12 goals and 17 points in his last 29 games. He added two goals and four points in 11 playoff contests.
Pettersen finished the 2021–22 regular season with 13 goals and 26 points in 59 games.
To put it mildly, Pettersen has not been a model of consistency at the AHL level. That said, he also hasn’t spent much time with regular linemates.
While Jakob Pelletier spent the entire 2021–22 campaign on Stockton’s top line with Matthew Phillips, Pettersen bounced around with a rotating cast of different linemates and even spent time as a healthy scratch.
Here’s what Wranglers head coach Mitch Love had to say about Pettersen’s development as a player last season:

Consistency is a big thing. I really felt that there was a lot of growth to his game, on both sides of the puck, throughout the year. And then there was pockets when he was one of our best forwards. And then there was some pockets when you didn’t notice him as much. So I think again as a young pro, it’s finding that consistency, it’s’ really honing in on those habits and those details in your game that allow you to have consistency and play at a high level. And again, a guy that we’re going to need a lot out of offensively and defensively this year in the American Hockey League. And ultimately when he does those things with consistency, hopefully he gives himself a chance to play in the NHL some day.

Assuming Pelletier makes the jump to the National Hockey League in 2022–23, Pettersen should have a relatively wide-open path to a spot on the Calgary Wranglers’ top line.
Pettersen’s main competition will likely be Martin Pospisil, another 2018 draft pick of the Flames who is more of a power forward. Pospisil has also had issues with consistency, but his biggest challenge as a pro has been with avoiding injuries. Pettersen has remained relatively healthy during his first two professional seasons.
Beyond Pospisil, Pettersen will have to outplay newcomers Cole Schwindt and Rory Kerins to keep his spot as an AHL top-six forward. Pettersen’s entry-level contract is set to expire after this season, and there’s no guarantee he’ll be re-signed if he remains at his current level of AHL production.
If Pettersen can carve out a niche on the Wranglers’ top line this year, he could put himself in the queue to earn NHL games down the stretch. If he falters, he might be looking for a new team next July.