The Flames have found lots of value in the sixth round 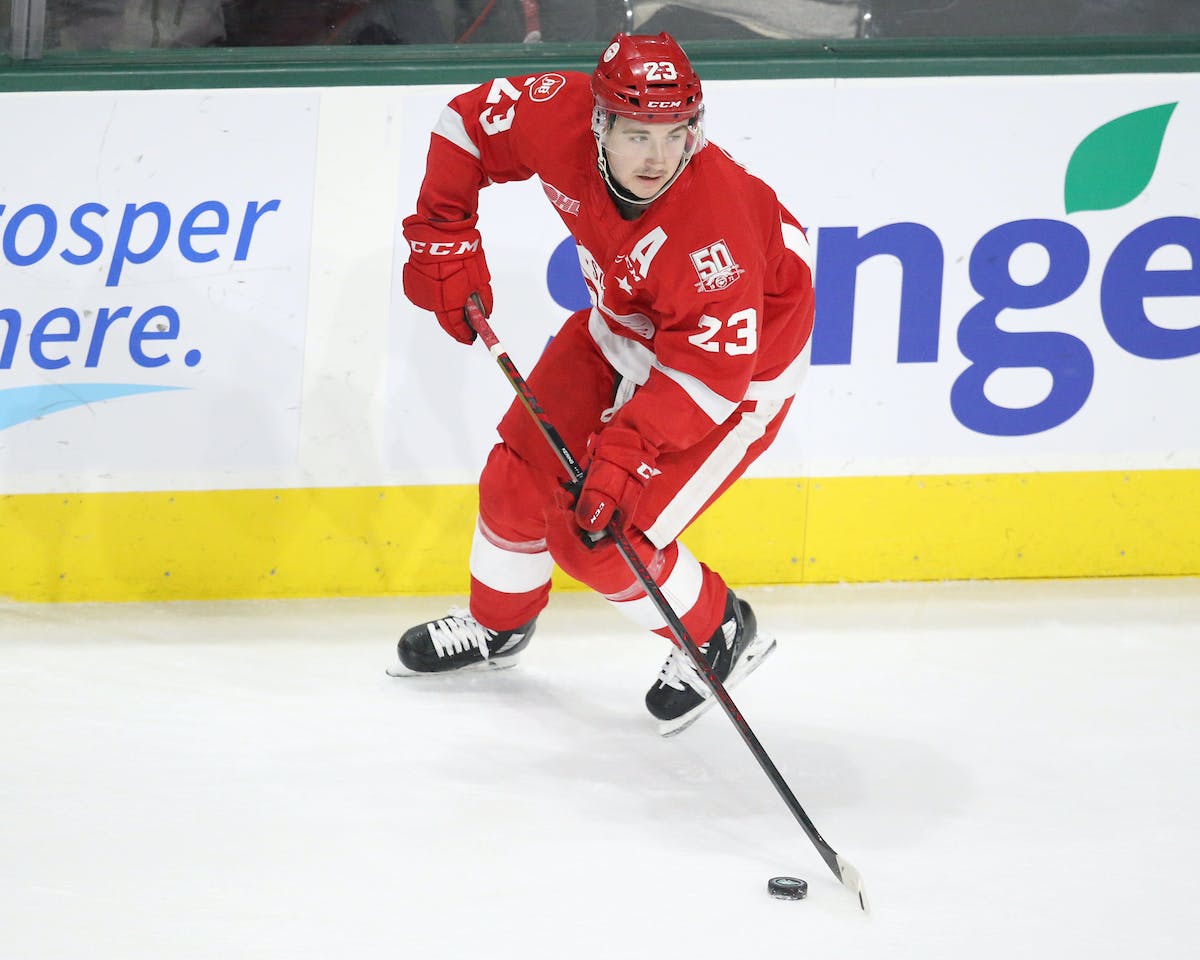 By Ryan Pike
4 months ago
At the NHL Draft, a lot of teams have found value in the early rounds. The Calgary Flames, consequently, have recently found a lot value later on. The Flames have made nine selections in the sixth round since Brad Treliving’s arrival: five of those players signed entry-level deals, two more still might, and the Flames even found a top six winger late in the draft.
Here’s a tour through the Flames’ recent sixth-rounders.

The Flames traded their own 2014 sixth-rounder to Dallas for Lane MacDermid, but recouped that pick when they traded Tim Jackman to Anaheim.
The Flames’ tendency in late rounds early during Treliving’s tenure was “When in doubt, grab a big kid.” Ollas Mattsson had size and potential. He was unranked by FC Hockey, but ranked 15th among International skaters by Central Scouting. Ollas Mattsson played a couple seasons for the Flames on AHL deals and was useful farm depth, but never ended up signing an NHL contract.

In 2014, Mangiapane was overlooked in the draft in his first year of eligibility. In 2015, he was selected in the sixth round in his second year of eligibility. He was the 85th-ranked North American skater and ranked 95th overall by FC Hockey, so it’s a bit odd that he fell that far – but, y’know, he was small. He turned into a massive drafting and development success story, progressing from good AHLer to depth NHLer to good NHLer to very good NHLer fairly rapidly.

Tuulola was a big kid with a good shot and oodles of potential in his draft year, which saw him bounce around a little bit. He was ranked 84th by FC Hockey and 15th among International skaters, so he slid a bit on draft weekend and the Flames pounced. He played his entry level deal with the Flames’ farm team and became a good secondary contributor, but he’s signed back in Finland so that might be where his time with the Flames organization concludes.

The Flames acquired this pick from Minnesota in the David Jones trade.
On one hand, Phillips had a great rookie season in the WHL in his draft year. On the other hand, he was small and only had one year of major junior under his belt. So it was probably inevitable that he would slide a little bit – Central Scouting had him as the 81st-best North American skater and FC Hockey had him 135th overall. He just finished off his entry-level deal and he developed into one of the top 20 or 30 scorers in the AHL over the past few seasons. He has a questionable NHL future due to his size, but the kid can flat-out score in the minors, and that’s not nothing.

A lanky kid from Quebec, Joly was the 102nd-ranked North American skater and ranked 104th overall by FC Hockey. He had tons of potential, but never really progressed in junior, and so the Flames and his camp weren’t able to come to terms on an entry-level deal.

An intriguing kid from Norway who came to North America as a young teenager to chase his NHL dreams, Pettersen was the 120th-ranked North American skater and ranked 155th overall by FC Hockey. He probably went more or less where he was projected to, give or take a few picks. He signed his entry-level deal after two years in college. So far, he’s making progress in the AHL.
(The Flames’ 2019 sixth-rounder was traded to Carolina in the Eddie Lack trade.)

Kerins ended up being another pick along the lines of Mangiapane, Phillips or Pettersen. Good offensive numbers, but smallish. He was ranked 72nd among North American skaters and 107th overall by FC Hockey in his draft year, but somehow was available when the Flames selected at 174th – ’cause he’s not 6’2″, I suppose. The Flames grabbed him, and he was second in scoring in the OHL last season. He’s signed an entry-level deal and is ear-marked for the AHL next season.

This pick was acquired from Los Angeles after the Flames traded down in the third round in 2021. Beck had no games in his draft year, and so the Flames had to rely on their scouting observations of him as a 16-year-old in the prior season. He was unranked by FC Hockey and was 82nd among North American skaters via Central Scouting, and the Flames grabbed him at 168th as another smallish offensive forward. He ended up having a superb 2021-22 season, and is a pretty safe bet to get an entry-level contract in the future.

The Flames went small and skilled five slots earlier in 2021 with Beck, so they went a bit bigger and burlier with Ciona at 173rd. He was Central Scouting’s 151st-ranked North American skater, and ranked 270th by FC Hockey. He’s big and more of a secondary scorer, even at the WHL level, but he had a good playoffs and maybe he could be a good physical force in the AHL. (With all the smaller skilled guys in the system, this seems like a defensible departure this late in the proceedings.)
The Flames found Mangiapane in the sixth round (of his second draft). They found Phillips and Pettersen, two good AHLers, and Tuulola, who was a decent depth AHLer with some potential. Kerins and Beck seem like they project well. Heck, Ciona might end up being another Tuulola-level AHLer, and finding that level of usefulness late in the draft is found money.
The Flames have found and exploited a lot of market inefficiencies late in the draft, and the result is them getting a lot of value out of their sixth-round selections.