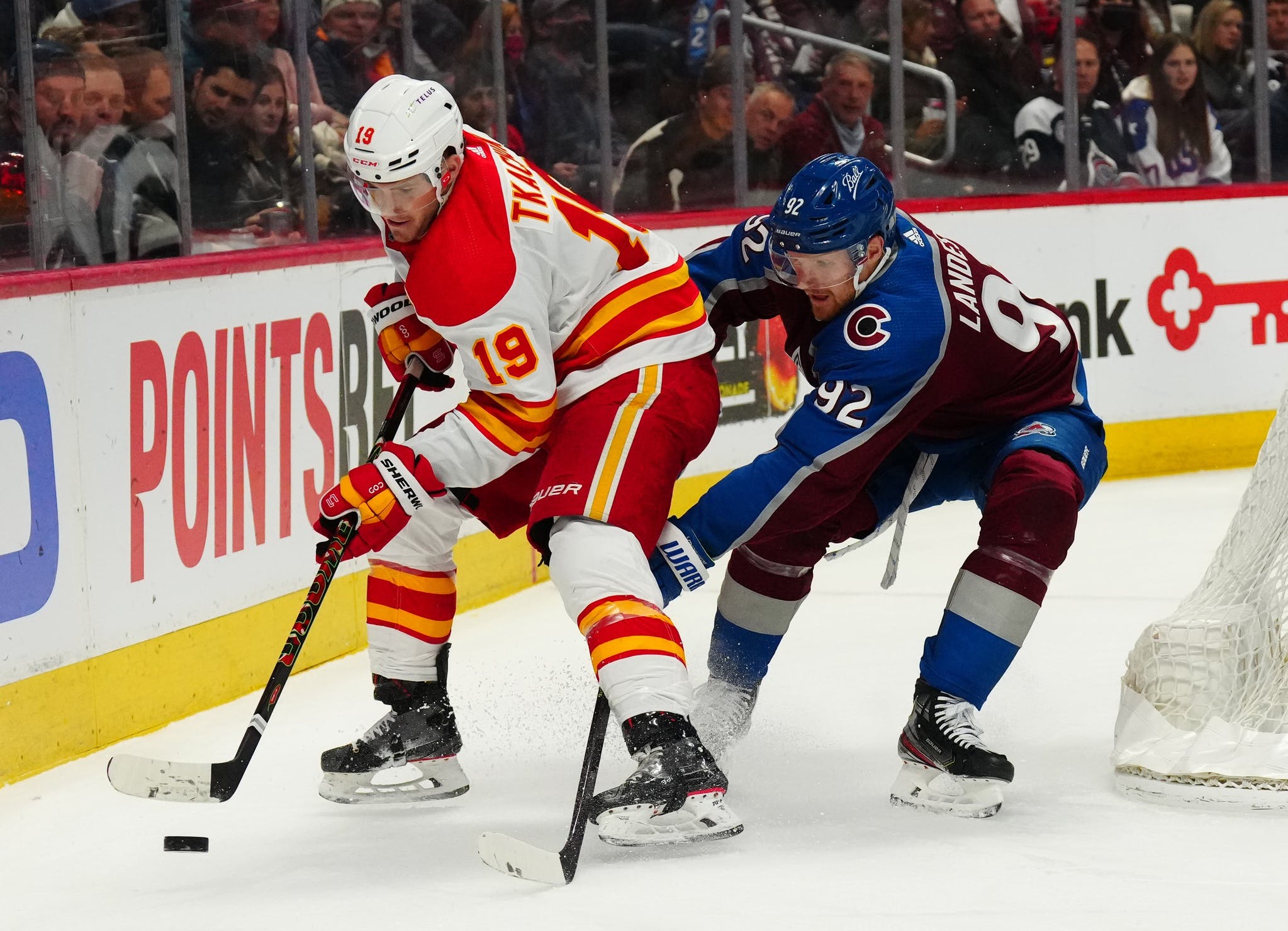 By Ryan Pike
11 months ago
Sometimes games get built up in a way where they cannot meet the hype. Saturday night’s game between the Calgary Flames and Colorado Avalanche was not one of those games. It was an intense, tight-checking, playoff-type battle between two very good hockey teams.
The Flames took advantage of a strong performance from their top line to beat the Avalanche 4-3 in overtime.

The opening period felt like shinny, with chances and momentum swinging back and forth pretty rapidly. The Avalanche opened the scoring just 42 seconds in. The Flames dumped the puck into the Colorado zone and went for a chance, but Colorado’s quick transition got the puck up the ice and generated a bunch of quick chances. Dan Vladar made a big stop on Valeri Nichushkin but nobody could corral the rebound, allowing Gabriel Landeskog to jam it past a sprawling Vladar to give the home side a 1-0 lead.
But just 1:27 later, the Flames tied it up. Darcy Kuemper took a puck-over-glass delay of game penalty, giving the Flames a power play. It took five seconds – a face-off win and a couple quick passes – for Elias Lindholm to bury a Matthew Tkachuk feed to tie the game up at 1-1.
Late in the first period, Colorado got the lead back. The Avalanche had a power play but the Flames penalty kill got the puck deep in the Colorado zone… but turned the puck over. Colorado’s quick transition got the puck up ice and allowed their power play to quickly set up. A couple passes later and Andre Burakovsky beat Vladar with a quick, high shot to give Colorado a 2-1 lead.
But the Flames answered back just 1:06 later. Nikita Zadorov held a Colorado clearing attempt in at the offensive blueline. He passed to Tkachuk, and Tkachuk found Lindholm in the slot and his wobbling shot beat Kuemper to tie the game at 2-2.
Shots were 14-9 Flames (9-7 Flames at five-on-five) and scoring chances 6-4 Flames in the first period.
The Flames took the lead early in the second period. An errant puck in the Colorado zone was held in at the blueline by Johnny Gaudreau. Gaudreau fed Erik Gudbranson, and the blueliner’s shot beat Kuemper off the post (and clanged in) to give the Flames a 3-2 lead.
Kuemper was pulled after allowing three goals on 15 shots and the Avalanche began their push. Eventually, they used their transition game (again!) to tie the game. A Tkachuk/Gaudreau odd-man rush was broken up by Cale Makar, who jumped into the rush the other way. A couple passes on a three-on-two set up Nathan MacKinnon for a great shot from the slot area that beat Vladar to make it a 3-3 game.
Shots were 12-11 Avalanche (all at five-on-five) and scoring chances 10-4 Avalanche in the second period.
Neither team scored in the third period, but it was an intense, tight-checking 20 minutes of hockey. Vladar was the busier goalie but he was very sharp.
Shots were 14-11 Avalanche (12-10 at five-on-five) and scoring chances 10-7 Avalanche in the third period.
Lindholm sprang Gaudreau for a breakaway in overtime after stealing the puck in the defensive zone and Gaudreau beat Pavel Francouz to give the Flames the 4-3 overtime victory.

Lindholm scored or set up three of Calgary’s four goals. He gets the nod.
But let’s give the other two top line players credit: Gaudreau and Tkachuk were also quite good. And Vladar was excellent in net and settled in very nicely. And the third pairing of Gudbranson and Zadorov played very well, too.

Let’s just frame Vladar’s entire third period. He was poised, calm and confident and stared down Colorado’s top guns for 20 minutes. His third period gave the Flames a chance at two points.

With three points in Saturday’s game, Gaudreau moved past Gary Suter with 565 points for fifth place in the Flames franchise’s all-times point leaderboard. The only players ahead of number 13 are Jarome Iginla, Theo Fleury, Al MacInnis and Joe Nieuwendyk.
Milan Lucic and Kurtis MacDermid fought in the first period.

The Flames (33-14-7) are headed home. They’re back in action Monday night when they host the Edmonton Oilers in another exciting instalment of the Battle of Alberta.