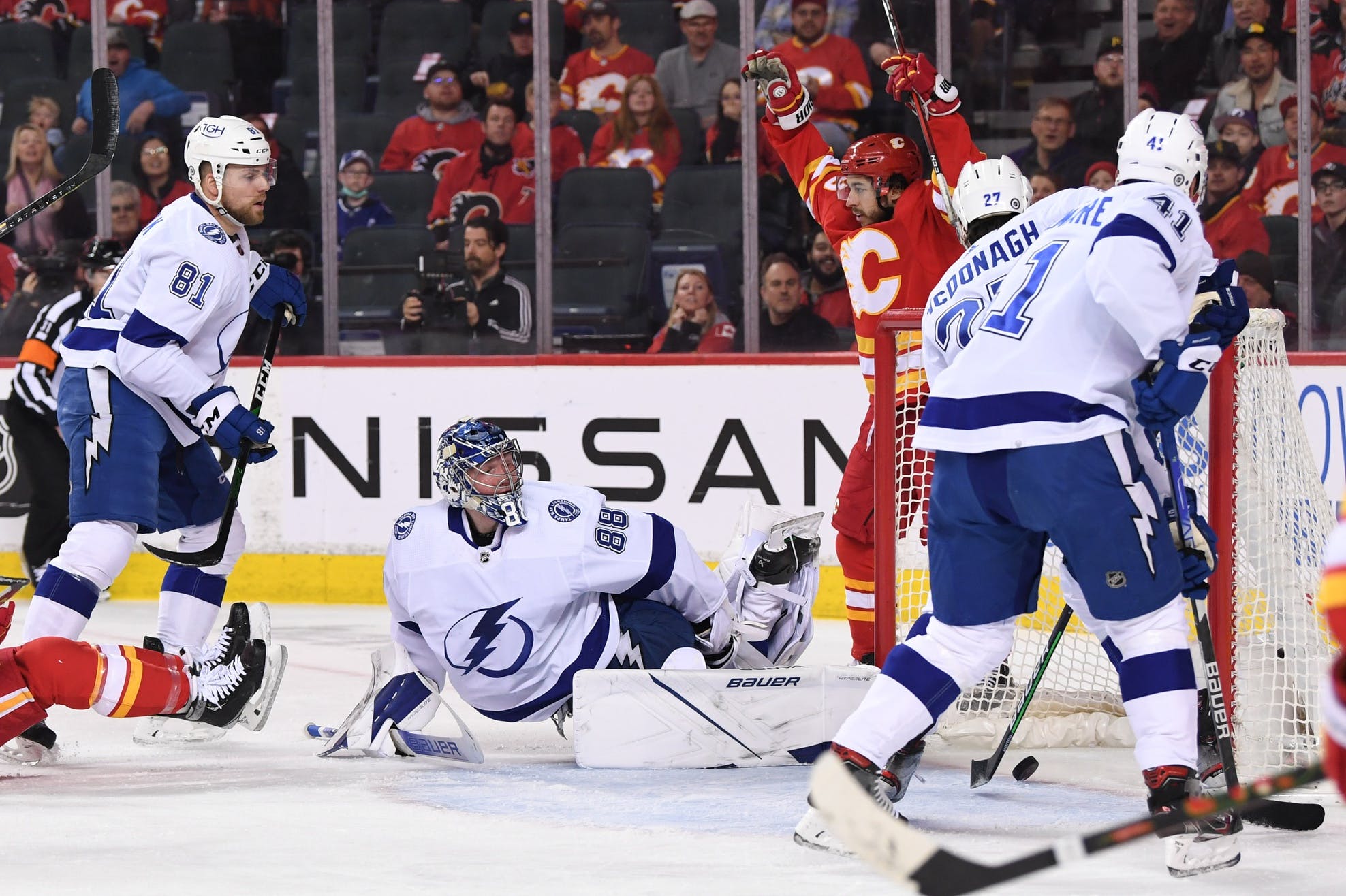 By Ryan Pike
8 months ago
The Calgary Flames welcomed the two-time defending Stanley Cup champions, the Tampa Bay Lightning, to town on Thursday night. The game was everything you’d want from three periods of hockey: big saves, nice goals and a general up-tempo style of play resemblant of Saturday night’s game in Colorado.
Powered by some timely goals from Johnny Gaudreau and some strong goaltending from Jacob Markstrom, the Flames triumphed over Tampa Bay by a 4-1 score.

The first period was pretty back-and-forth, with the Flames having some troubles executing on breakouts and Tampa Bay whiffing on good scoring chances and taking penalties. The penalties part of that equation would come back to haunt them.
The Flames had two power plays in the opening period. The first generated two shots and neither was particularly threatening. They were much more assertive on their second power play midway through the period, generating three shots in just 28 seconds. The second one was a shot from Tyler Toffoli that was stopped by Andrei Vasilevskiy. The third one was a Johnny Gaudreau shot from beside the net that bonked off Vasilevskiy’s butt and into the net, giving the Flames a butt goal and a 1-0 lead.
The Lightning had some zone time and some nice chances – the best was a Ross Colton chance after a turnover at the Flames’ blueline – but Jacob Markstrom was sharp.
Shots were 12-11 Lightning (10-6 Lightning at five-on-five) and scoring chances 10-5 Lightning in the first period.
The Lightning tied the game up late in the second period off a nice bit of passing and movement in the Flames zone that induced a little bit of defensive coverage drift by the home side. From the corner to Markstrom’s right, Colton found Alex Killorn with a pinpoint pass through a seam (and Killorn had a step on Elias Lindholm) for a quick redirect past Markstrom to tie the game up at 1-1.
But the Flames answered back before the period ended. After a bit of a broken play off a rush into the Tampa zone, Matthew Tkachuk jumped on a loose puck and headed to the net. His shot was stopped by Vasilevskiy, but Gaudreau gathered the rebound, skated around a couple players, and bonked the puck in off Tampa’s goalie again. This one was off Vasilevskiy’s shoulder and gave the Flames a 2-1 lead.
Tampa seemed content to kill off the remaining 60 seconds and regroup in the intermission. But Trevor Lewis fished the puck out of a board battle and threw it to the right point. Erik Gudbranson hucked the puck towards the slot, where Mikael Backlund redirected it past Vasilevskiy to give the Flames a 3-1 lead. The two goals came 52 seconds apart.
Shots were 14-13 Flames (13-12 Flames at five-on-five) and scoring chances 16-12 Flames in the second period.
Gaudreau completed his hat trick with a one-timer off a feed from behind the net from Lindholm. Vasilevskiy saw it, by but the time he registered that Gaudreau was shooting the puck was already in the net. That made it 4-1 Flames and they held on for the victory.
Shots were 7-5 Flames (5-5 at five-on-five) and scoring chances were 6-5 Lightning in the third period.

This game was really entertaining and really evenly played. Both teams played well. Both goalies played well. The Flames executed slightly better than Tampa did on their scoring chances, but it’s hard to criticize either team in such a well-played game.

Gaudreau had a hat trick, so let’s give it to him by default. Honourable mention to Markstrom, who was excellent throughout this game.

The two late second period goals were a big difference-maker for the home side in this one.

Linesman Jesse Marquis was down on the ice and left the game after accidentally taking a Trevor Lewis slapper to the side of the head on a dump-in into the Tampa zone. He didn’t return to the game, so they played most of the game with one linesman and two referees (with one of the referees acting as a linesman in addition to calling penalties).
The Flames are now 28-0-2 when leading after two periods this season.
Backlund’s son, Oliver, turned one year old today. His dad scored a goal on his birthday. That’s fun.

The Flames (35-15-7) are back in action on Saturday night. It’s a rare 5 p.m. local start time as the Flames take part in the early game of Hockey Night in Canada against the Detroit Red Wings.

News
Recap: Jeremie Poirier scores OT winner for Wranglers’ 4-3 win over the Canucks
Do Not Sell My Info
Privacy Settings