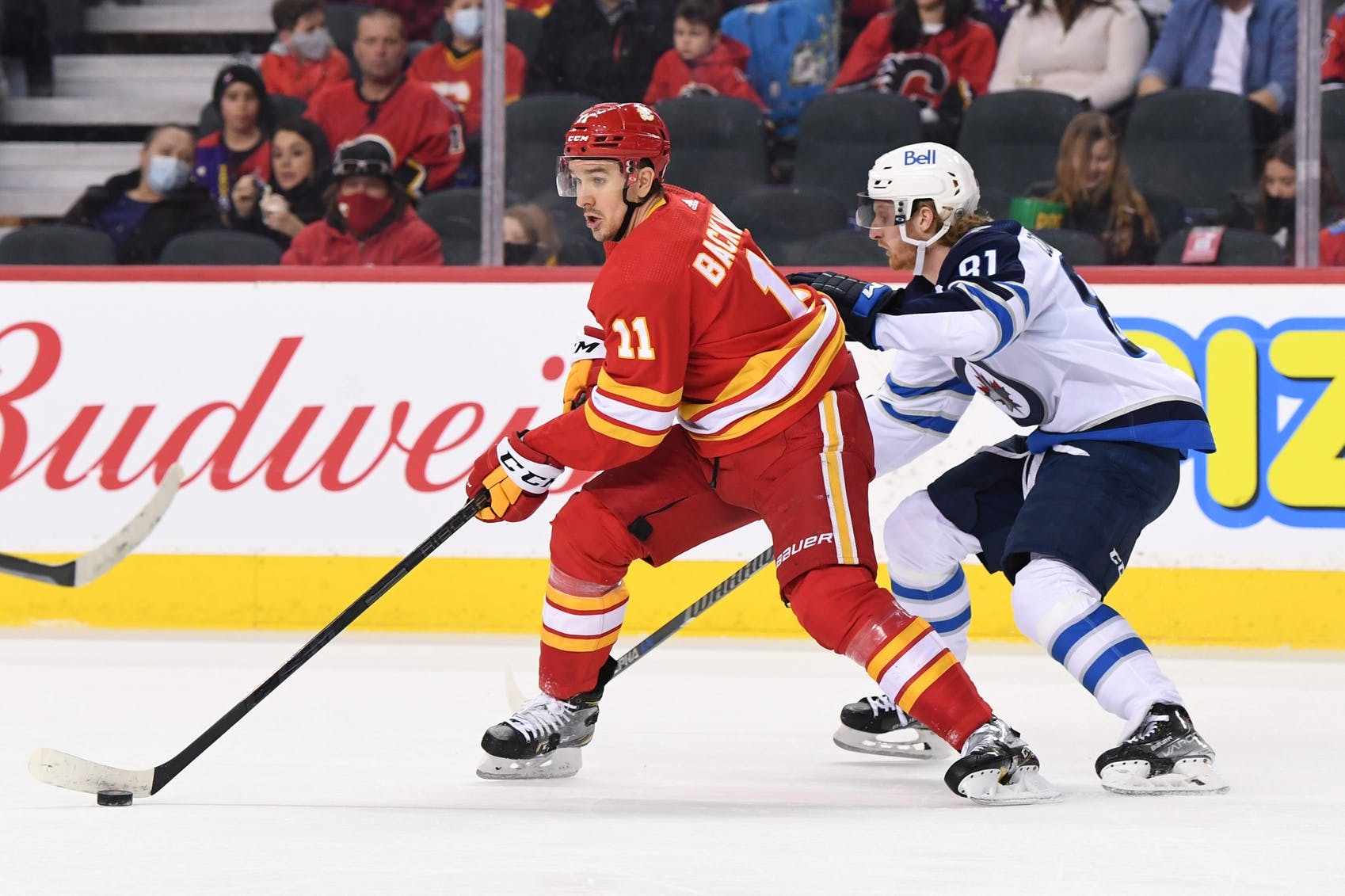 By Ryan Pike
9 months ago
The Calgary Flames hosted a rare matinee game at the Scotiabank Saddledome on Monday afternoon, welcoming the Winnipeg Jets to town. It was a low-scoring, tight-checking affair, with both teams probably wishing they could’ve managed the puck a little bit better.
But the Flames battled and got a timely late goal (and an empty netter) to grind out a 3-1 victory over the Jets. This win extends their winning streak to a franchise record-tying 10 in a row.

Neither club scored in the first period, which was book-ended by some special teams work. The Flames’ power play looked pretty good late in the period, though it didn’t score. Neither team looked overly dangerous at five-on-five, though the Flames had more zone time than the Jets did.
Shots were 11-8 Flames (7-7 at five-on-five) and scoring chances 10-6 Flames in the first period.
The Flames opened the scoring early in the second period. With the second power play unit on the ice (on an advantage that carried over from the first period), Andrew Mangiapane sent Sean Monahan towards the net with a nice pass. Monahan beat Connor Hellebuyck high to give the Flames a 1-0 lead.
The visitors answered back, though. The Jets got more and more zone time and scoring chances in the first half of the second period. During that span, the Jets had the ability to cycle the puck and stack some traffic in front of Jacob Markstrom. Neal Pionk fired a shot from the point that, while travelling through that traffic, was deflected by Dominic Toninato and beat Markstrom. That tied the game at 1-1.
The Flames looked to retake the lead later in the period after Elias Lindholm scored, but the Jets challenged and it was determined that the puck entered the Jets zone off-side and so the goal was wiped out.
Shots were 14-7 Flames (11-7 Flames at five-on-five) and scoring chances 8-8 in the second period.
The Jets were the better team for much of the third period, really using their speed to take advantage of some lapses by the Flames and generating some good scoring chances. Markstrom was sharp and Chris Tanev saved a sure-fire goal with sliding belly-flop block on a Jets power play.
The Flames broke through late, though. Johnny Gaudreau took advantage of a Jets turnover in their own zone, then held onto the puck and waited for a shooting lane. His shot from just inside the offensive blueline was deflected by Lindholm and beat Hellebuyck to give the Flames a 2-1 lead late. The situation room reviewed for goaltender interference – Matthew Tkachuk was around the crease – but the goal stood.
Tyler Toffoli added an empty net goal to make this a 3-1 victory for the Flames.
Shots were 8-6 Jets (6-4 Jets at five-on-five) and scoring chances 6-4 Jets in the third period.

The Flames played very similarly to how they played against Seattle: structurally pretty solid, but their execution of the details within that structure had some issues. They made some odd puck management decisions, but they generated enough chances – especially late in regulation – to grind out a very close victory over the Jets.

Any time Mikael Backlund’s line with Blake Coleman and Andrew Mangiapane were on the ice, they were seemingly in the Jets’ zone creating chances and wearing them down. They were superb as a unit, so let’s give them the thumbs-up here.
Markstrom was also really sharp, especially given the number of dangerous chances his team gave up.

The Flames (30-13-6) are headed back on the road for one game. They face the Vancouver Canucks at Rogers Arena on Thursday night. 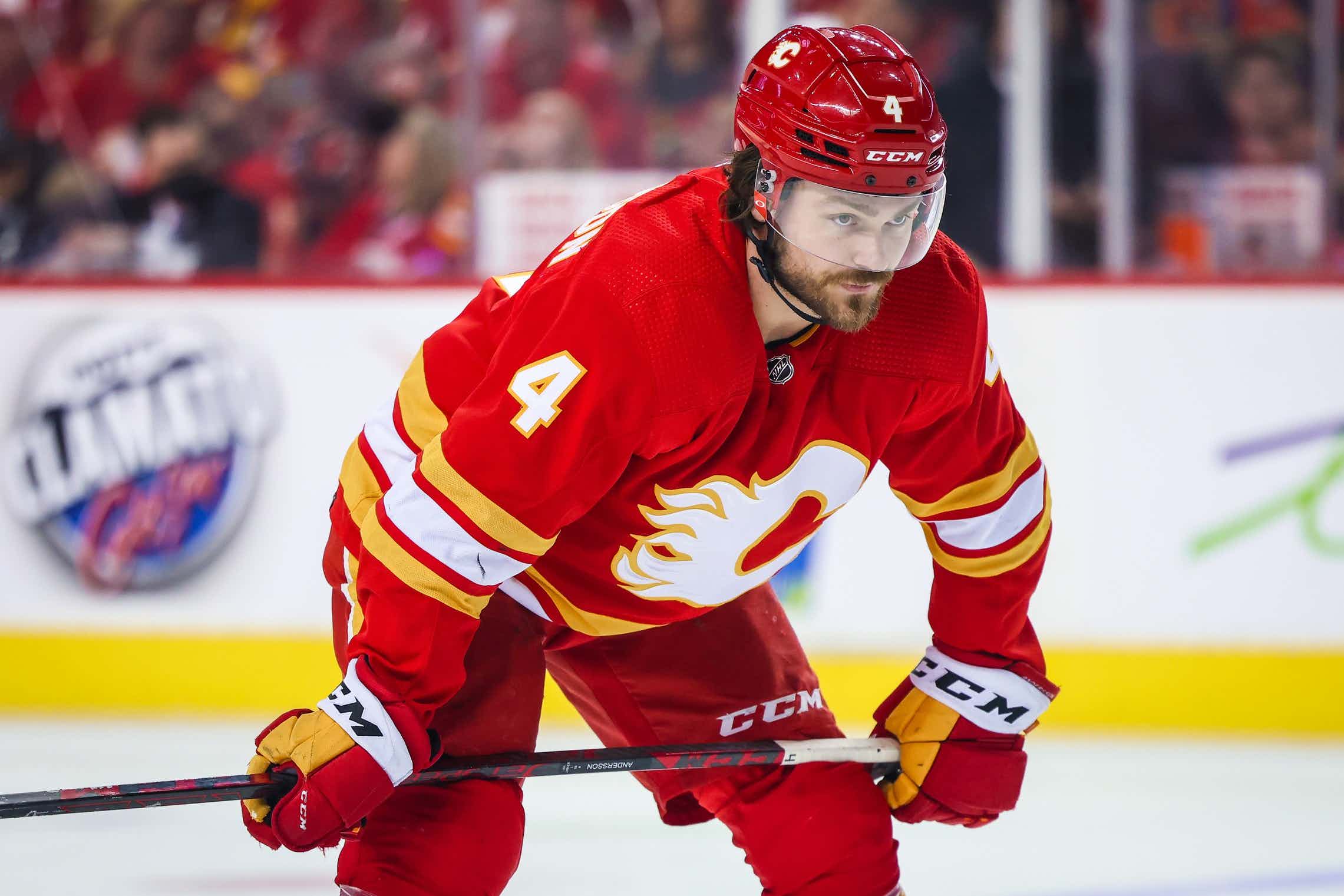