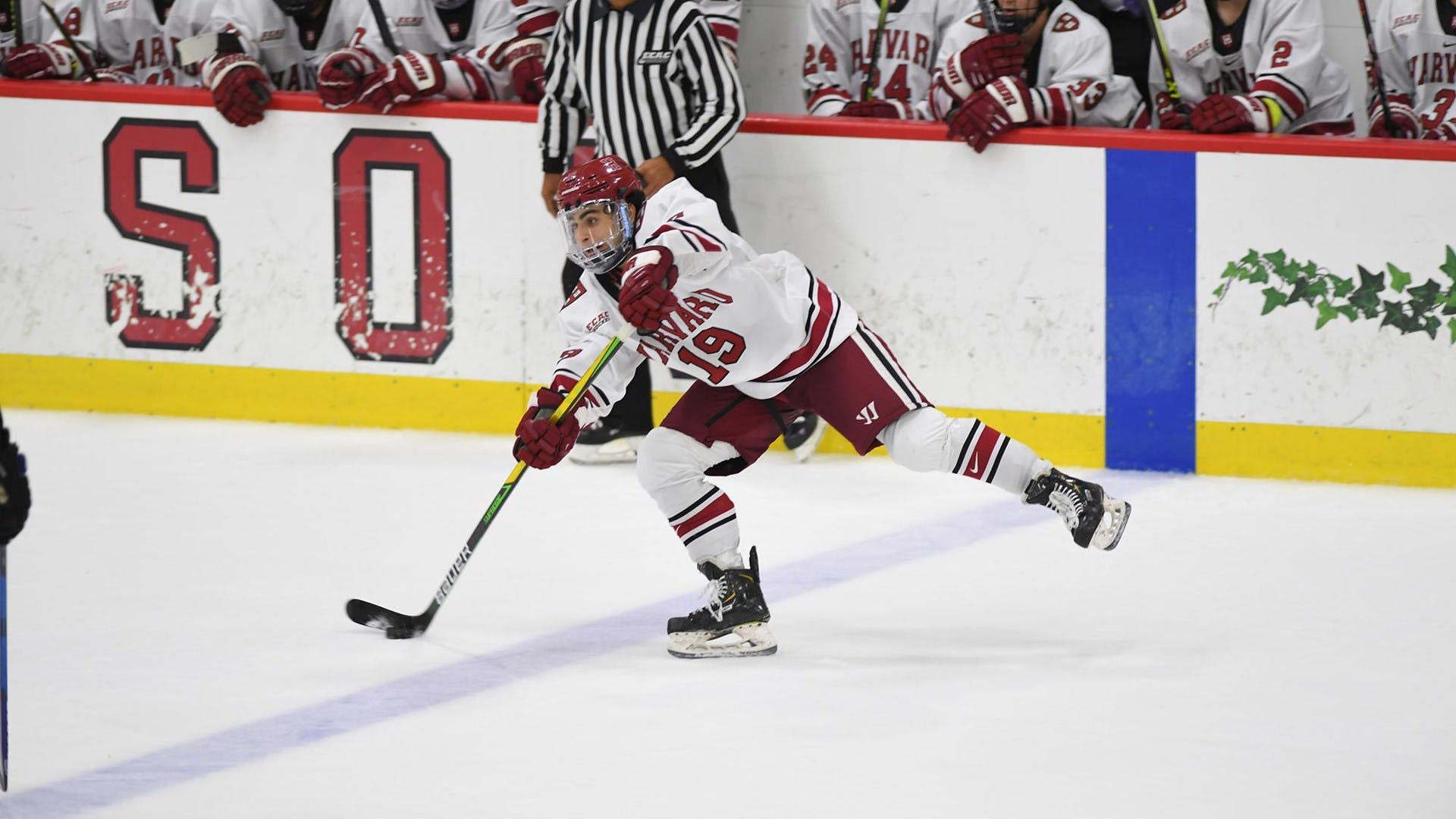 By Mike Gould
27 days ago
Calgary Flames forward prospect Matt Coronato had a superstar outing with the Harvard Crimson during Friday’s game against the Princeton Tigers at the Hobey Baker Memorial Rink in Princeton, NJ.
Coronato, 20, scored a pair of goals in the final eight minutes of regulation time to help the Crimson erase a 3–0 deficit and ultimately come away with a 4–3 overtime victory.
The 2021 first-round draft pick first made his presence felt on the power play at the 12:05 mark of the third period, receiving a cross-ice feed from Montreal Canadiens prospect Sean Farrell and depositing the puck past Princeton goaltender Ethan Pearson to make it a 3–1 game.
Ian Moore (Anaheim Ducks) also picked up an assist on Coronato’s eighth goal of the 2022–23 NCAA regular season.
Harvard remained down by two into the final three minutes of the third period. That changed when Toronto Maple Leafs prospect Joe Miller unloaded a gorgeous one-timer past Pearson from the high slot to make it 3–2 with just 2:36 left to play.
From there, it took just 16 more seconds for Coronato to tie it all up with his second goal of the game. The sophomore forward skated onto a loose puck at centre ice, crossed the blue line with speed, and fired a pin-point wrister past Pearson’s blocker to draw Harvard level. The Crimson didn’t even have to pull their goaltender to spark the comeback.
Coronato’s ninth goal of the season went into the books as unassisted.
Even beyond his heroics in the third period, Coronato had a game to remember for Harvard. He took seven shots on goal (including four in the third period) and went 18-for-32 in the faceoff dot.
Coronato now has points in six consecutive games with the Crimson and has only been held scoreless twice in 14 appearances this season. He’s up to nine goals and 19 points in just 14 games, most of which he’s played as Harvard’s No. 1 centre.
As for the final result of Friday’s game: Harvard capped off the comeback in overtime with a slick little goal by Los Angeles Kings prospect Alex Laferriere. The Crimson improved to 10–3–1 on the season with the win and will now get set to take on the powerhouse program from Quinnipiac University on Saturday.
Coronato’s exclusive draft signing rights with the Flames will remain in effect until Aug. 15, 2025, at the latest.
News
Recent articles from Mike Gould