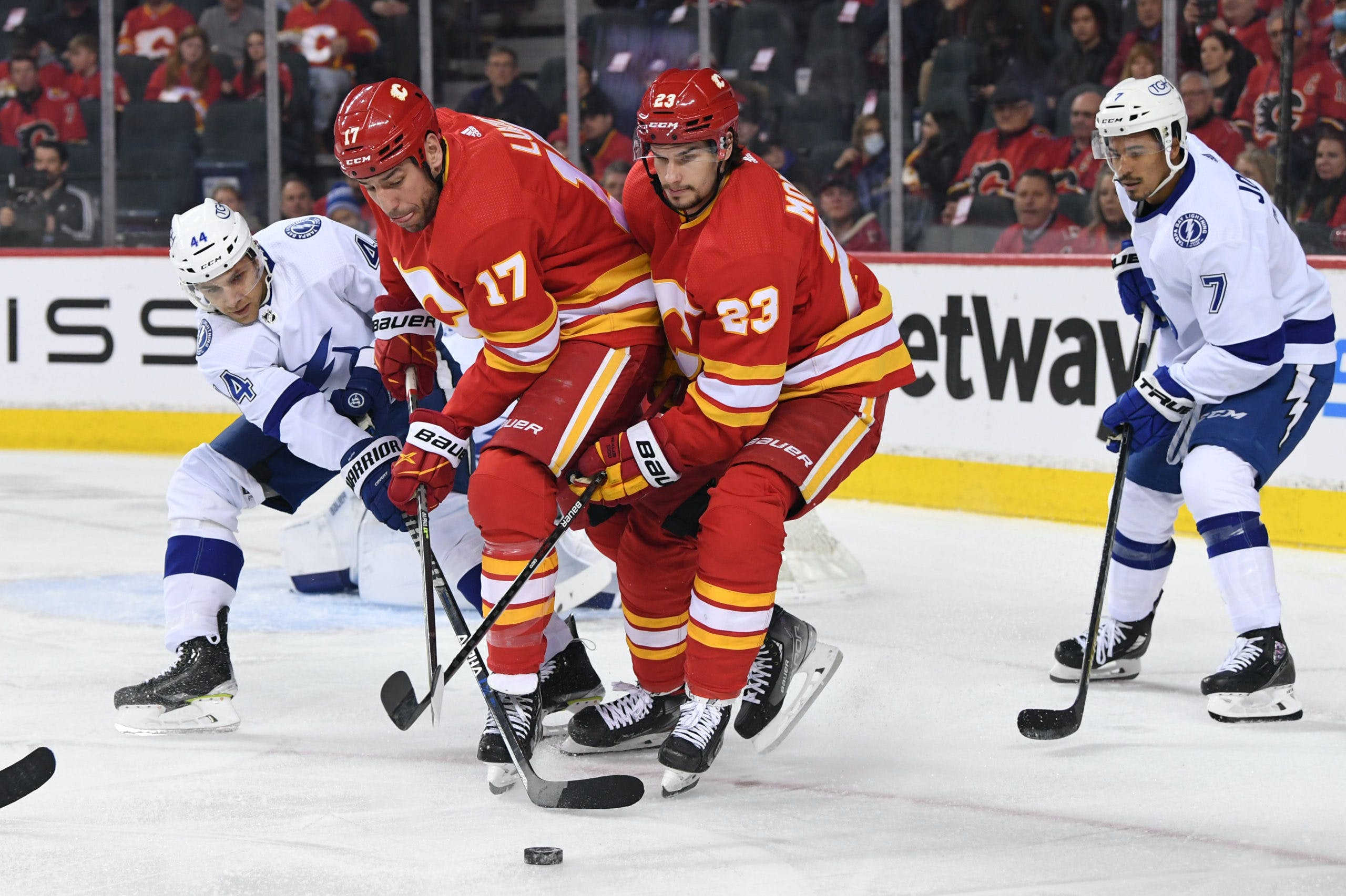 By Mike Gould
5 months ago
The Calgary Flames are in a bit of a financial pickle.
Both @Johnny Gaudreau and @Matthew Tkachuk have emphasized their desire to remain in Calgary for the long haul. If the Flames are able to get deals done with those two, you can bet they’ll be expensive.
Beyond locking up their two 100-point stars, the Flames still have considerable contractual work ahead of them.
@Andrew Mangiapane just scored 35 goals and 55 points. @Oliver Kylington amassed 31 points in his first full season as an NHL defenceman. Both need new deals.
While Kylington could be in line for a bridge contract as a pending restricted free agent, Mangiapane only has one more year ahead of him before he can test the UFA market. A long-term deal is a strong possibility for him.
Ideally, the Flames would like to bring back all of their major pending free agents. Gaudreau, Tkachuk, and Mangiapane are the Flames’ three best wingers; Kylington is one of the most dynamic players in the Flames’ shallow pool of defensive talent.
As things currently stand, the Flames have approximately $55.5 million committed to eight forwards, four defencemen, and two goaltenders for the 2022–23 season. That leaves them roughly $27 million under the $82.5 million salary cap with a minimum of six roster spots (and likely a couple more) left to fill.
Let’s say Gaudreau, Tkachuk, and Mangiapane take up $25 million. The Flames would then sit just $2 million below the cap with just 17 players on their roster. That’s not gonna fly.
Who’s staying put? For starters, @Mikael Backlund, @Blake Coleman, @Elias Lindholm, @Tyler Toffoli, Chris Tanev, @Noah Hanifin, @Rasmus Andersson, @Jacob Markstrom, and Dan Vladar likely aren’t going anywhere.
@Dillon Dube and @Juuso Valimaki have uncertain fates, but they’re unlikely to be moved for cap reasons. They both make relatively paltry figures and would presumably have value in hockey trades. They might not stay, but their contracts aren’t exactly problematic.
That leaves two players: @Sean Monahan and @Milan Lucic.
Monahan, 27, has one year remaining on his deal at a $6.375 million cap hit; Lucic, 33, also has one year left and costs the Flames $5.25 million against the cap, although there’s more to that figure than what meets the eye.
Both Monahan and Lucic have had excellent careers. They also both fell well short of expectations in the 2021–22 season. While it’s not too far-fetched to imagine Monahan rebounding at some point, the Flames need to free up some of his money to use elsewhere.
The good news: Flames general manager Brad Treliving should have multiple options at his disposal for moving on from Lucic and/or Monahan. As mentioned, both players only have one year left on their respective deals.
Escaping their contracts might not be painless, but it’s also far from impossible.

In theory, this sounds like the simplest option. The Flames can look for a team willing to roll the dice on Lucic and/or Monahan for a year while also receiving an asset to absorb their contracts.
Well, it might not be that easy. For one, the teams that can afford to take on a cap hit north of $5 million while having the roster flexibility to fit in a Monahan or a Lucic are pretty much exclusively destined to miss the playoffs — and both Monahan and Lucic have the contractual power to exercise some level of control over their potential destinations.
Theoretically, a team like the Arizona Coyotes would likely be all over a player like Sean Monahan … but his 10-team no-trade clause might throw a wrench into that equation.
Monahan is set to earn $6 million in base salary this coming season. His no-trade clause is relatively forgiving. And here’s the thing: Monahan also has future contract negotiations to consider. Even if a team like Arizona is on his NTC, would it be better for him to play out the last year of his current deal as a fourth-line centre in Calgary or as a top-six centre in the desert?
While Monahan’s case is fairly straightforward (his deal is all base salary and his NTC only covers 10 teams), Lucic has a fascinating contract that affords him a lot more control over his situation.
Starting July 1, Lucic will be able to give the Flames a list of 10 teams to which he will accept a trade. That’s right: Monahan’s deal allows him to pick 10 teams he can’t be traded to, while the clause in Lucic’s contract is the exact opposite.
But, here’s the catch. Also in early July, the Flames owe Lucic his $3 million signing bonus. After that, he’ll count for $5.25 million against their salary cap — but they’ll only have to pay him an $875,000 base salary.
Any team acquiring Lucic after his bonus is paid will be able to get $5.25 million closer to the salary cap floor while being on the hook for less than $1 million in real money. That sounds like a dream come true for budget teams like Arizona and Ottawa.
Again, Lucic would likely have to agree to go to either of those places. There’s also the question of what, exactly, it would cost for the Flames to persuade another team to take on one of their unwieldy contracts.
Last summer, it seemed like the Coyotes acquired half the bad assets in the entire National Hockey League. @Andrew Ladd, @Anton Stralman, @Shayne Gostisbehere … you name ’em, they played for Arizona last year.
Here’s a look at what it cost for teams to dump their unwanted contracts on the Coyotes in the 2021 off-season:
To Arizona:
D Anton Stralman (one year, $5.5 million cap hit)
D @Vladislav Kolyachonok (2019 second-round pick)
2024 second-round pick
To Florida:
2023 seventh-round pick
To Arizona:
D Shayne Gostisbehere (two years, $4.5 million cap hit)
2022 second-round pick
2022 seventh-round pick
To Philadelphia:
Future considerations
To Arizona:
LW Andrew Ladd (two years, $5.5 million cap hit)
2021 second-round pick (60th overall — @Janis Moser)
2022 second-round pick
Conditional 2023 third-round pick
To NY Islanders:
Future considerations
The Coyotes certainly received valuable assets in exchange for taking on the Ladd, Gostisbehere, and Stralman contracts. That being said, they didn’t receive a single first-round pick in any of these deals.
The only first-rounders the ‘Yotes acquired last summer came to them in exchange for @Oliver Ekman-Larsson, @Darcy Kuemper, and @Christian Dvorak — deals where they sold valuable players (yes, they took back expiring deals from the Canucks to make the money work in the OEL deal, but that’s not super relevant).
Last year, the Panthers gave up a second-rounder and a similar young defenceman to move Stralman — who approved the move to Arizona — and create space to extend @Anthony Duclair and @Sam Bennett. It’s hard to imagine the price being much different to move Monahan or Lucic, assuming the Flames can find a destination that works for all.
If you could give up a second-round pick and a player like @Juuso Valimaki to move someone like Monahan and free up the necessary space to re-sign Andrew Mangiapane, would you?

For one, buying Lucic out doesn’t make any sense.
Fig. 1: Milan Lucic buyout details
The Flames wouldn’t even be able to afford a replacement for Lucic next season if they bought him out. It’s a complete non-starter.
Buying Monahan out is a significantly more realistic proposition, although it would result in the Flames being dinged with a $2 million penalty in 2023–24.
That being said, would you rather spend picks and/or prospects to clear $6.375 million or give up no additional assets to free up $4 million?
Fig. 2: Sean Monahan buyout details
If the Flames are unable to find a practical trade partner for Monahan this summer, buying out the final year of his deal might just be the way to free up the money they need to fit Mangiapane and Tkachuk under the cap.

This section primarily pertains to Lucic.
Let’s make one thing clear: Lucic has had one hell of a career. He’s been a fearsome presence in the National Hockey League for 15 seasons, playing 1,096 games in the regular season and 136 more in the playoffs.
Lucic has a Stanley Cup ring and 565 career points (226 goals, 339 assists) in the NHL. He won the 2007 Memorial Cup and was named tournament MVP. He’s done all this while playing a punishing style that comes with its toll.
According to Treliving, Lucic played through an AC joint sprain at the end of the 2021–22 season. In his final 48 games of the year, he managed just one goal and four points.
During a similar stretch of decreased production in the 2019–20 season, Lucic contemplated retirement. He finished that year strong, had a really nice 2020–21 campaign, and started well in 2021–22 before hitting a wall down the stretch.
As mentioned earlier, Lucic is due a $3 million signing bonus at the beginning of July. That’s his money. If Lucic were to retire after collecting that bonus, his entire cap hit for 2022–23 would vanish into the ether and he’d only lose his $1 million base salary for the season.
Is Lucic going to play for $1 million? If he were a free agent today, he’d probably get offers worth more. It’s hard to say, and only he knows the answer to that question. He’s a proud and competitive guy.
If his response is “no,” then the Flames’ path forward becomes a lot less complex. If it’s “yes,” then the Flames’ options will be to pay a team to take him or to keep him for one final year at a $5.25 million cap hit.
Lucic is a fan favourite in Calgary. He’s absolutely been way better than @James Neal ever was for this team. But when it comes down to keeping him or being able to sign Mangiapane … the choice is clear.