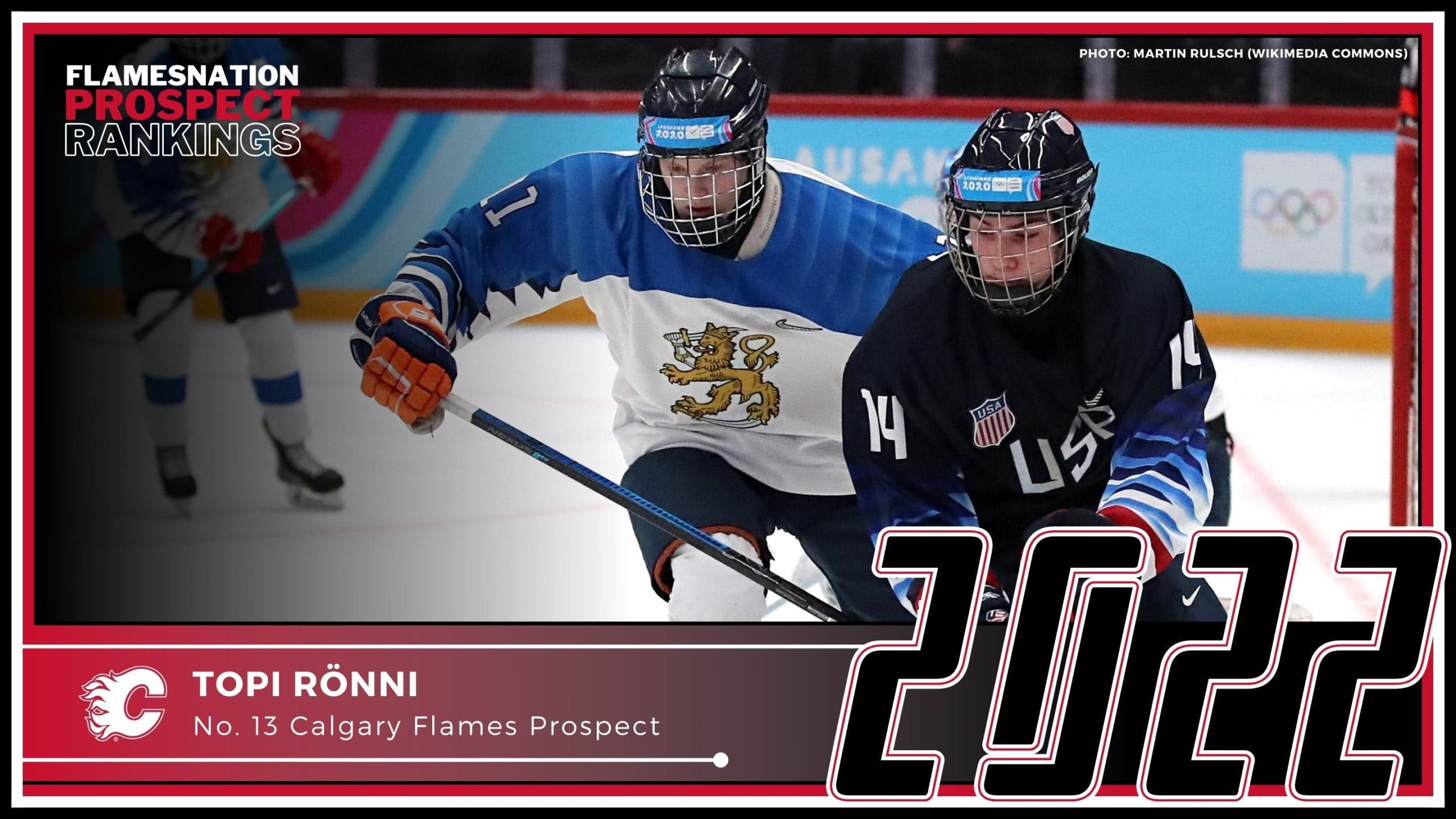 By Mike Gould
3 months ago
The Calgary Flames didn’t make many selections at the 2022 NHL Draft, but they were able to pick up a solid prospect in the second round: Topi Rönni.
The Finnish centre is still a relatively unknown commodity in most Flames circles, but the numbers — and some European scouts — suggest he could eventually become a middle-six forward in the NHL.
Here’s what you need to know about the Flames’ top pick from this year’s draft.
Topi Rönni
Centre
Born May 5, 2004 (18 years old) in Hausjärvi, Finland
6’2”, 181 pounds
Drafted in second round (No. 59 overall) by CGY in 2022
You can never have enough good centres.
Rönni split the 2021–22 season between four different Finnish teams, and that doesn’t even include his international experience.
The big left-handed forward spent most of his time with Tappara in the Finnish U20 SM-sarja league, scoring 11 goals and 29 points in 30 games during the regular season. He added a pair of assists in two playoff contests with the team.
Among 2004-born SM-sarja players in 2021–22, Rönni finished in a tie with Nashville Predators defence prospect Kasper Kulonummi for the sixth-most points. He was a perfectly solid two-way forward in that league.
More importantly, Rönni played a big chunk of last season in the top-tier Finnish Liiga. He split the season between Tappara and HPK, scoring two goals and four points in 20 games.
Here’s the video of Rönni’s first Liiga goal, featuring some fantastic Finnish commentary:
Now, while four points in 20 games doesn’t look all that impressive at first, it’s important to note Rönni was a 17-year-old playing in an elite men’s league. Juraj Slafkovský, selected first overall by Montreal in the 2022 draft, scored five goals and 10 points in 31 Liiga games last season.
Rönni also had a solid showing with Team Finland at the 2022 U18 World Juniors, finishing sixth in team scoring with two goals and four points in six games.
Here’s what EliteProspects.com director of European scouting Lassi Alanen had to say about Rönni’s attributes as a player:

Rönni projects in the mold of a two-way center who can be relied on defensively but who has also shown an offensive game worthy of drafting. He supports his defencemen well down low in the defensive end, finishes his off-puck routes, makes well-timed stick lifts, and knows how to leverage his frame in puck battles. He’s a very capable puck-handler with strong mechanical prowess and soft touch. Though he still needs to improve on creating offence with the puck and those hands, he excels at finding soft spots and leveraging his off-puck positioning to create looks for himself. Rönni’s biggest weak point has been his skating, dragged down by his lack of ankle flexion and knee bend. He did start to add more pace to his skating in the second half of the season, and it’s reasonable to believe he’ll get to a level where it won’t inhibit him from playing in the NHL. He’s more of a “high floor, low ceiling ” type of player, but a development curve similar to Juuso Pärssinen could be in the cards. There’s a decent chance he’ll become a useful bottom-six piece.

The Flames haven’t yet signed Rönni to an entry-level contract, and they likely won’t for another year or two.
The young centre is under contract in Finland through the end of the 2022–23 season, and it’s difficult to imagine the Flames bringing him over to play in the AHL before he turns 20. It would likely be better for his development for him to continue moving up through the ranks in Finland until he’s ready for a top-nine centre spot with the Wranglers.
Rönni could spend more time in the Finnish U20 league this season, but it would be a little disappointing if he isn’t able to take another small step forward in the Liiga. He’ll want to avoid following the precedent set by 2021 second-round pick William Strömgren, who regressed in Sweden’s J20 league and barely played any SHL games in his draft-plus-one year.
If Rönni can emerge as a Liiga regular with Tappara this season, the Flames might have a future middle-six centre on their hands.